The battle royale genre quickly became one of the most popular genres in video games, but after a while the games lost their edge. The idea needed some new bite, a bit of fresh blood injected into the formula that would give it new life. Enter Sharkmob Interactive, who have partnered with World of Darkness to bring Vampire: The Masquerade - Bloodhunt to PCs later this year. At first I thought the idea was too far-fetched, but after spending an hour with the game battling against developers and other press, the concept now makes perfect sense.

The core battle royale gameplay is intact in Bloodhunt: a large number of players enter a confined space, looting and finding weapons scattered throughout the area. Eventually the playing area gets constrained even further, forcing the players to group together and battle it out until the last vampire wins. Simple, easy to understand, and anyone who's played Fortnite or PUBG knows what to expect.

What's interesting is how the game tweaks those mechanics in order to present a more unique experience. Take "the circle," the ever-present barrier between the safe zone and the storm that will eventually kill anyone caught in it for too long. In most battle royales that is a perfect circle, completely round and slowly shrinking until a match ends. In Bloodhunt it can't be called a "circle" because it's simply not, it's an amorphous shape that makes the boundary between safe and deadly much more difficult to predict. In one match an early safe zone was trapezoidal almost before constricting into a straight line, completely catching me off-guard. This is an interesting change, defying one of the previously iron-clad rules of battle royale, and it makes the late-game section of a match very interesting.

The world of Bloodhunt seems ordinary, but even that holds some changes to the standard battle royale formula that really make this game stand out. Let's start with the city of Prague, which serves as the map for Bloodhunt battles. It's a sprawling urban landscape with buildings that stretch to the sky. Every structure in the game can be climbed, allowing for rooftop battles or scouting when planning your next move. Some buildings even have indoor areas, which could be hiding top loot or offer a place for you to hide in a pinch. However, the vampires warring in the city aren't the only beings walking around, which touches on another of Bloodhunt's crucial changes. 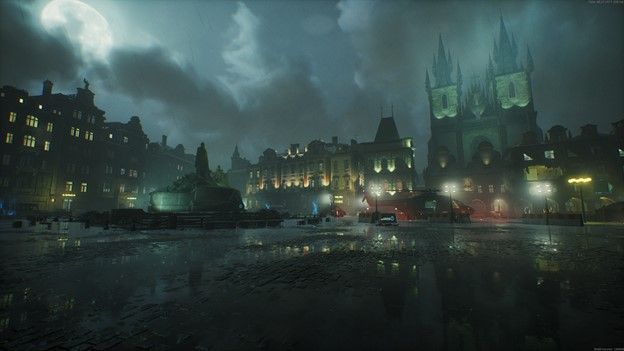 NPC human citizens line the streets of Prague as you explore, the extrasensory "scanning" function allowing you to find them in real time. Feeding on these poor souls--you are a vampire after all--not only restores health, but sometimes offer specific buffs for a short time. One NPC I encountered regenerated my health one half-point per second for as long as the buff lasted. Another improved my defense, while a third made my melee attacks stronger. These buffs will stack if you feed fast enough, including leveling up buffs you might have already found to make them stronger. These buffs could easily make a difference throughout a match, so make sure to keep an eye out for a meal.

As you are a vampire, and you need to maintain the "masquerade" in order to not expose yourself as a vampire, the city and its people can also work against you. Entering the indoor areas can sometimes trigger an alarm, tipping off nearby enemies to your location. Jumping on cars sets off their car alarms for the same effect. Worst of all, should you confuse a NPC for an enemy during a skirmish and kill them, your cover is blown and every enemy in the match can see your exact location for a full minute. This is bad enough in a solo match, but imagine how angry your friends will get when you blow their cover in a team match. 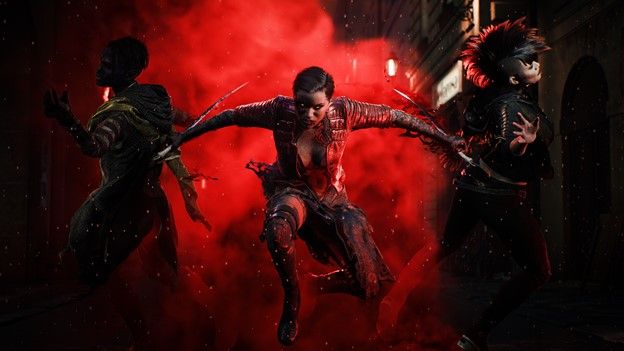 But what makes this game Vampire: The Masquerade the RPG and not just a vampire battle royale? That would be twofold, the different classes to choose from when creating a character and the bits of lore scattered throughout the map. Classes vary from tank-style bruisers that deal heavy damage up front to lithe and agile runners that do best from a distance, and you get your choice right from the start. As for the lore, dozens of collectibles across the map fill in the overarching story surrounding Bloodhunt, creating a story that I suspect will continue for a long time to come. These are pieces that make this game feel like a true Vampire entry, like it belongs in the conversation with the rest of the established lore, and they go a long way in making Bloodhunt feel authentic.

The world of Vampire: The Masquerade sounds strange when placed next to the term "battle royale," but right now Sharkmob is well on its way to assuading any fears about the idea. Bloodhunt is a new and refreshing take on the format, making a lot of changes to the normal formula but keeping just enough familiarity to not push battle royale fans away. Add to that the RPG elements that core Vampire fans will appreciate, and this is shaping up to be a solid cross-section of two wildly different genres. We'll know for sure when the Closed Beta for Bloodhunt begins on July 2.