One of the most highly requested games to come to the West, Lost Ark, is confirmed to be coming finally. Players will be able to drop the VPN and play on a client built specifically for the West this fall, with a beta coming this summer. Smilegate’s free-to-play MMOARPG is one that many fans have been waiting for, but for the uninitiated, just what is Lost Ark?

Thankfully, Amazon Game Studios, who will be publishing Lost Ark as their first third party published game, invited us to press preview to explain exactly that.

First and foremost, Lost Ark evokes the same kind of vibes you might get from Diablo or Torchlight in terms of its look. It’s a top-down ARPG in its presentation, with stunning visuals bringing the world of Arkesia alive. Players will take on demonic forces which are running wild in the world, trying to get themselves to the game’s namesake – the Lost Ark.

Lost Ark is a unique take on the MMOARPG, blending many of the systems you see in both together. As such, players will choose from 5 base archetypes to base their characters around, though from there they can build their characters to range from one of fourteen different classes, all focusing on different types of gameplay.

Classes include the Warrior, Martial Artist, Gunner, Mage and Assassin, but once you’ve hit level 10 you can specialize into something more unique. For example, playing as a Warrior, do you want to be a tank, or a big bruising damage dealer? The Gunlancer or Berserker might be up your alley. Each class has a distinct style, which allows for a ton of min-maxing, especially when you consider the complex skill system at play as well. 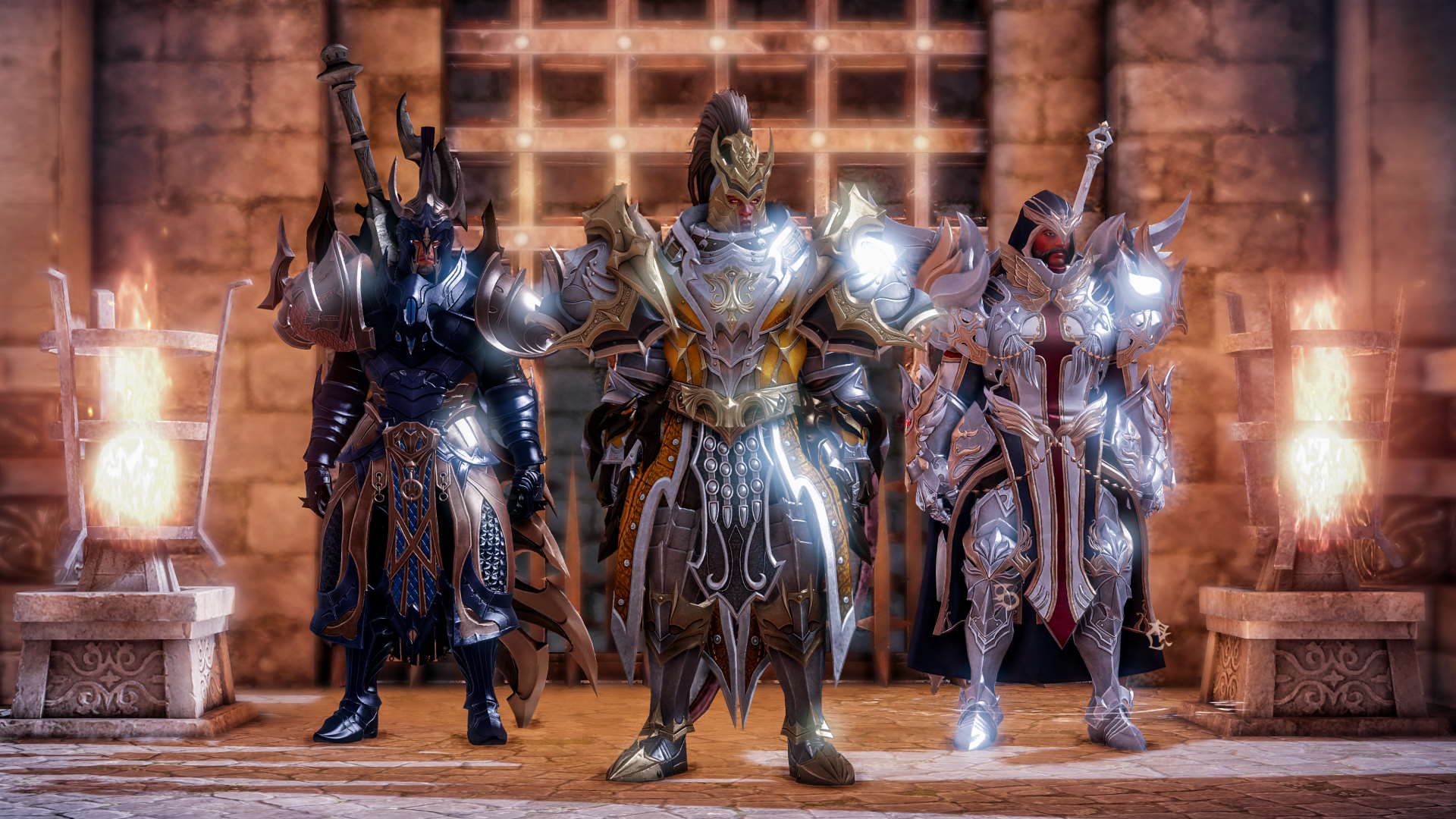 The Tripod skill system allows for customization within each class archetype, allowing players to create the best skill set and meta for their class. As you level skills, they will also change visually, showing you on screen each power increase as you progress. For example, taking a skill like Whirlwind, which swings an attack around your character, you can upgrade it to increase it’s range. Doing so creates a larger attack animation, showing that increased range and power increase. However, by upgrading the skill yet again, you can even augment it further, such as having it leave a wicked tornado behind.

Each skill itself is divided into two or more branches as well, adding the complex depth players of ARPGs like Path of Exile and Diablo might enjoy. For those classes that have the same skills, this allows you to completely differentiate your build from the other class, creating something that unique to you and your playstyle.

However, you need content to test your might and skill set up against, and this is where the various dungeons and even raid bosses come into play in Lost Ark. There are different dungeon types, such as Cinematic Dungeons, Life Skill Dungeons, Chaos Dungeons and Treasure Map Dungeons, as well as just progression level dungeons.

Dungeons themselves allow different ways to play, such as the Life Skill Dungeons, which are based around the various life skill professions you can pick, such as mining or fishing. Each dungeon will also have a normal mode and a hard mode, giving players the chance to earn more valuable loot on the harder difficulties. Since the world of Lost Ark is situated on land and sea, meaning for some you might need to set sail to explore the loot available.

Players will be able to get their own ships in a quest, allowing Lost Ark inhabitants to explore more freely, fish, salvage goods and more. There are a few different ship designs to choose from, which should help your character and crew stand out from the crowd. 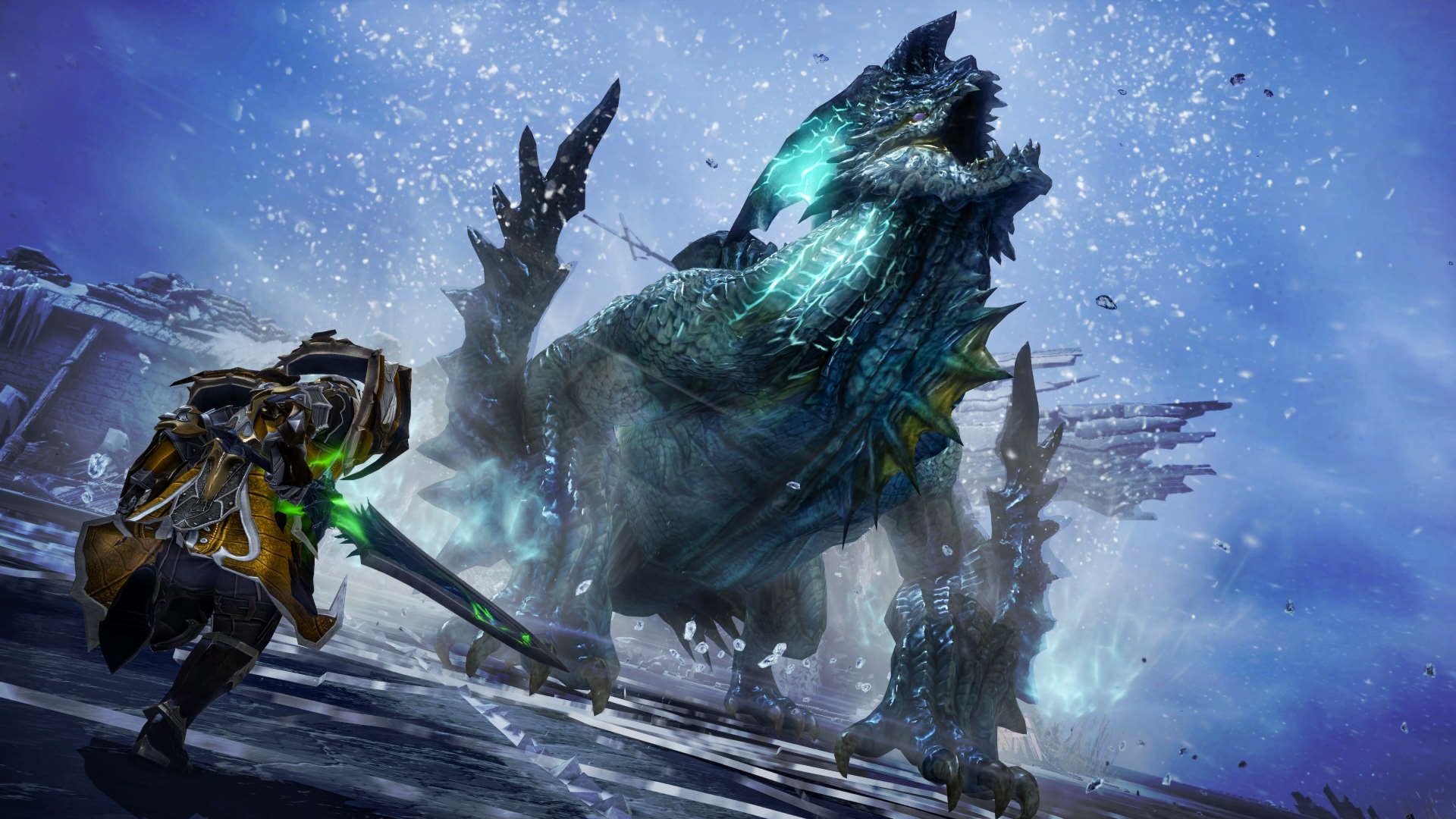 Standing out from the crowd will be important in the myriad PVP modes the Colosseum in Lost Ark will bring to the table as well. You’ll need to be at least level 50 to take part in PvP, but once you hit the level you can jump into team deathmatch, which sees 3-player teams clash headlong. Players can also tackle free-for-all modes to see who’s PVP skills reign supreme. Players will go to one of the billboards in the various settlements to join, and those to take part will win a token which can be exchanged for items and gear.

For those more interested in growing their characters life skills, there is that avenue for you as well. Mining, foraging, fishing, logging, hunting and excavating all bring valuable items and materials to players who can then turn around and use it to upgrade the player’s Strongholds.

A Stronghold is a player owned island, letting players build their own private home on their island and expand further, such as boats which can take you to other parts of your personal island. In Lost Ark, Amazon stresses that all of the features play together, so the life skills from before will provide the materials needed to build up and upgrade your Stronghold, for instance. 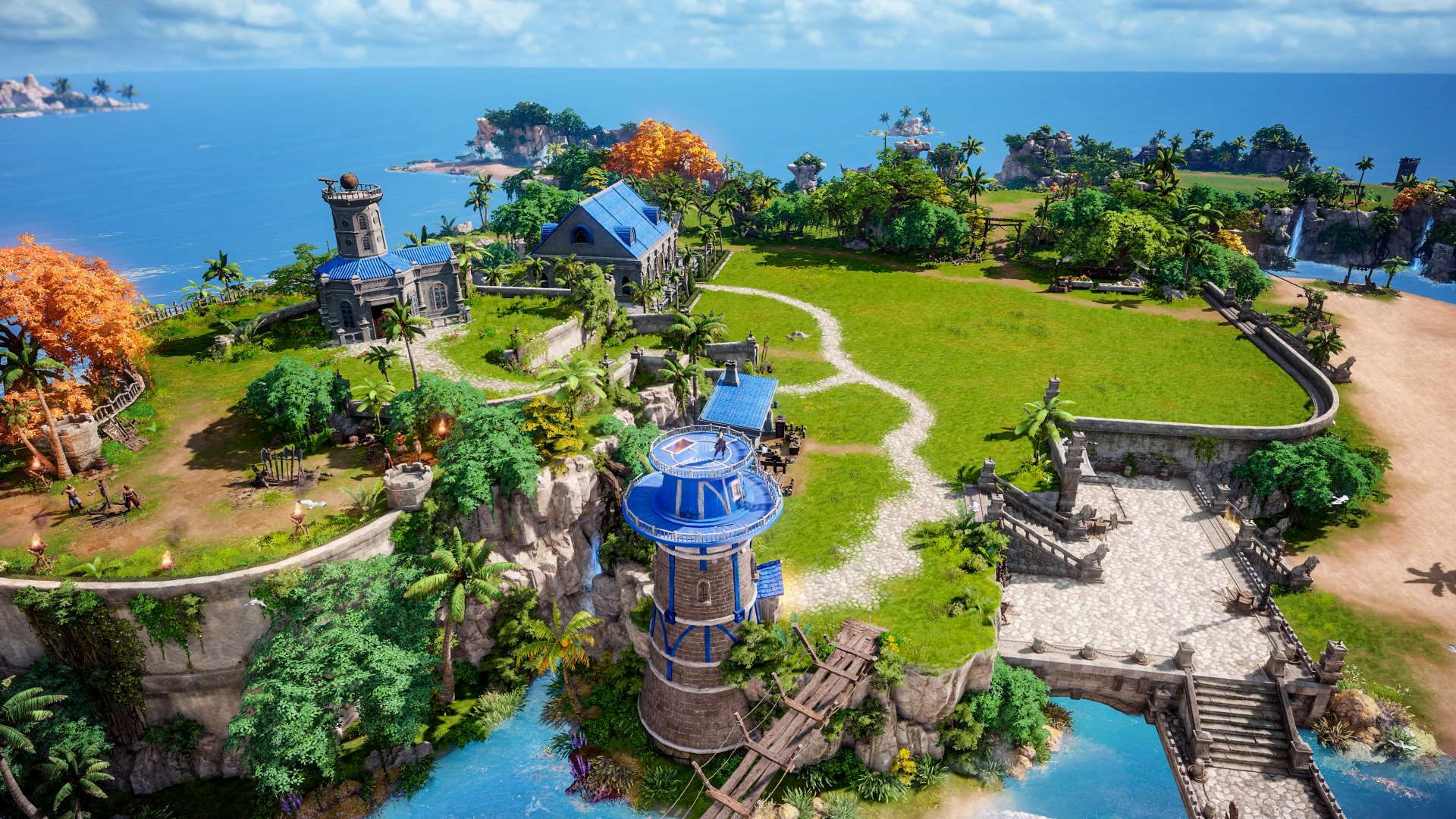 One other key feature of Strongholds is the Dispatch Station. This feature allows you to effectively send your ship crew out into the world and, well, do missions for you. This can be used especially for those players want to acquire Raid-tier gear without having the time to always be grinding on the raid to earn it the normal way.

Strongholds use Action Energy, and as you use the energy it’s going to effectively build to something. One example given (though this may not necessarily be representative of the actual time in game at launch, so take it with a grain of salt) was, again, sending your crew out on a Raid mission. Spending the Action Energy could mean that the mission takes twelve hours for your crew to complete for you. Dumping resources and Action Energy into the mission itself and then just go about your business, whether that be doing something else in Lost Ark, or effectively having it run for you as you log off for the evening. Doing a mission doesn’t guarantee raid gear at the end, though, but it does give you the chance to earn it even if you weren’t in the raid yourself. Thankfully, you can only do one Stronghold mission at a time.

However, there is the question of how a feature like this can exist while still respecting those players and the time it takes to put in the work and raid for the gear. Why would any raid when they can get the gear through this system? We asked Amazon during our Q&A, and Matthew Hudson, one of the producers at Amazon working on Lost Ark, was able to provide some insight into the issue. 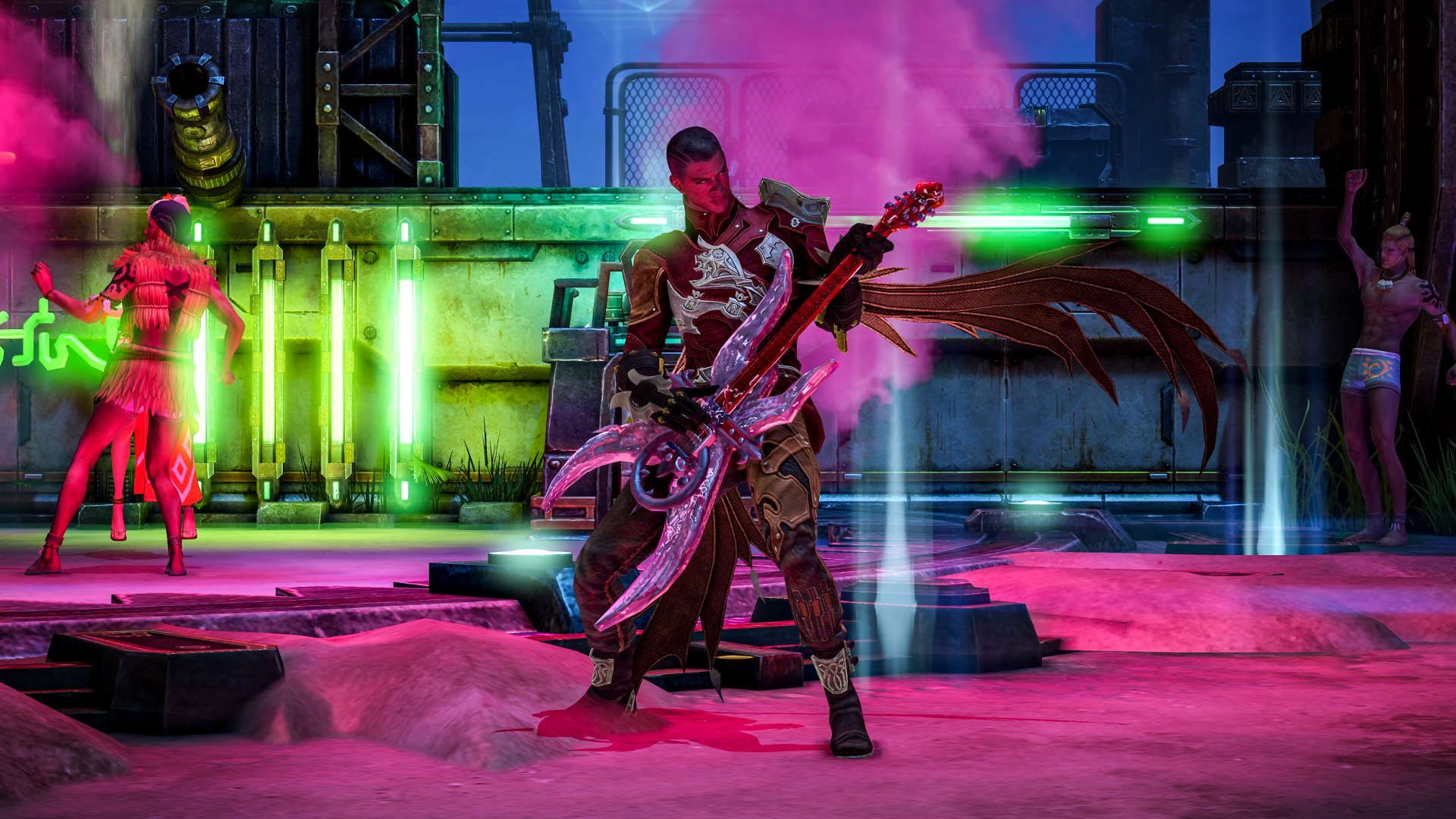 “It’s time gated,” Hudson said during our group Q&A. Hudson also went on to state that while you can get gear through this system, it’s not going to get you the gear quickly, nor will be netting you “all of the things” that raiders themselves would earn by putting in the work. For those raiders who put the time into raiding, you’re simply going to get more gear and content from raiding itself versus just having your crew handle it for you.

Lost Ark will be free-to-play game with in-game purchases. Amazon didn’t have details to share explicitly, though Amazon’s Oliver “Jake” Smith does state that there are ways to earn everything through gameplay. There will also be Founder’s Pack available to purchase, as well items like name changes and more. The team at Amazon will have more to add to this as we head into the launch of Lost Ark in the West, this Fall.