When we hear "developed by a single person," we expect to see something on a smaller scale, perhaps a simple design and basic gameplay. We don't expect to see a gigantic, procedurally generated space strategy game with hours of content in every session, but Scott D'Arcy of Stutter Fox Studios is doing just that. After checking the game out during an online E3 2021 hands-off demo, Falling Frontier has landed firmly on our radar.

Falling Frontier calls itself a "sci-fi RTS," landing players in a randomly-generated star system with planets, moons, and other interstellar locations. Players will man different types of vessels while exploring the reaches of space, like recon stations, scout ships, probes, and more. These ships will react and interact with the celestial bodies in the star system, making every movement important to the player's success.

The major hook of Falling Frontier is the lack of a signature real-time strategy feature: global resource systems. Supplies needed will have to be shipped from planet to planet by the player, utilizing supply depots and designated routes in order to get everything they need to progress. This is obviously also a major vulnerability in the heat of battle, as a supply depot getting blown to smithereens by a hostile fighter could spell the end of my entire run, leaving me to watch as my space civilization slowly dies with no food or supplies.

Space combat plays out in real time, with ships shooting and maneuvering at the player's command. The fight we witnessed was one in the middle of an asteroid field, adding a separate layer of danger having to avoid the massive space rocks. One unique feature during battle that caught our eye involved when a ship is about to be destroyed, as ships that are disabled will eventually have their crew ejected for safety. Be warned though: the enemy can pick them up as prisoners for intelligence purposes just as easily as you can save them from the darkness of space. The asymmetric nature of Falling Frontier is the key to success, as D'Arcy said in a press release "the player must use all the mechanics Falling Frontier makes available to wage asymmetric warfare. Raiding supply lines, lying in ambush behind planets, destroying recon stations—intel and logistics are the keys." 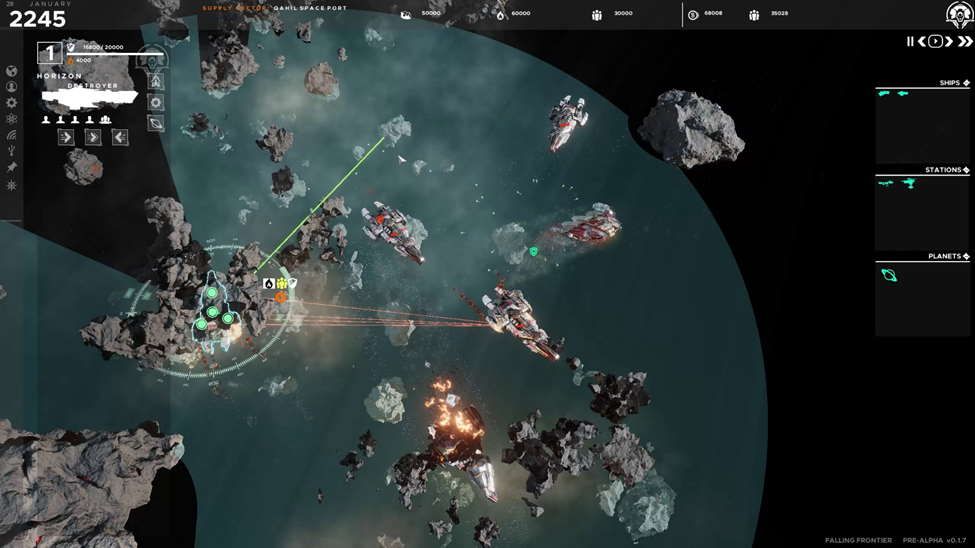 The space combat also showed off a really cool idea, one that uses space objects to the player's advantage. During the asteroid field battle the player needed to regroup and re-strategize, so they flew to an area where there was an asteroid between him and the enemy ship. Because of the way individual space objects are created in the game, the ship was hidden behind the asteroid, shrouded in darkness by the shadow created by the object itself. It's a little change, but one that has a profound effect on the battle as a whole.

As a press release for the game describes it: "In order to step outside the standard RTS formula of chasing numerical advantage, we are modelling the strategic terrain of a realistic star system. Players can attempt to hide their ships behind a planet or moon, mask their heat signature near a gas giant or star, or launch an ambush from within an asteroid field or nebula."

If you're worried about finding friends to enjoy Falling Frontier with you're in luck as the dev team recently announced a single-player campaign for the game coming at launch. Called Titan Rising, the campaign will follow a group of people from Saturn's moon Titan, who are under constant threat by Mars and its military presence throughout the galaxy. D'Arcy even teased that this is just the beginning for the game, saying "the events the player will experience in this war lead directly to the first human expansion beyond our own Solar System."

Falling Frontier is a large-scale strategy game, with a handful of new and interesting mechanics the genre has never seen before. The lack of global resources--and the subsequent dependence on supply chains and other logistical constraints--is a huge change but one we're excited to see more of. Space combat also looked very cool, right down to being able to rescue marooned squadmates from their derelict ship. Honestly the fact that this was all made by a single developer is mind-boggling, and makes us really looking forward to the full launch. We'll be ready to travel to the Falling Frontier when the game launches on Steam in late 2021.