When reading the description for Alliance of the Sacred Suns over on its Steam page, it sounds like Game of Thrones in space: "A thousand years in the future, humanity's last empire stands on the brink of collapse. Noble Great Houses compete for control over the decaying feudal state, while the lives of ordinary people have already begun the descent into an interstellar dark age." After spending some time in a hands-off demo via Discord as part of the E3 2021 festivities, that GoT description is more than a little apt.

The story of Sacred Suns involves the Xyl, a race of aliens that fooled humanity into walking into its own demise. The Xyl provided tech to the human race, which allowed humans to build portals, which the Xyl then used to invade. After being forced into space a war ensued, which humanity barely survived. Now, a thousand years after the initial invasion, the society that the human race's remnants created is about to fall, which is where the player comes in.

My demo began with a look at my home planet, Olympia, a desolate planet with limited resources. Within 30 seconds I have three transmissions from scouts and other house leaders throughout the galaxy, giving me updates or asking for favors in order to strengthen relationships. This quickly reinforces the broad truth about Alliance of the Sacred Suns: every single move I make will matter.

This game is 4x grand strategy of the highest order, allowing you to get as granular as you like when planning your next move. Every conversation, every decision, every planetary visit can shape the future of your house, and the game gives you the freedom to do whatever you wish--within your means, of course--during a turn. As you assign projects to locations in space and begin to expand, those choices will only multiply...for better or for worse. 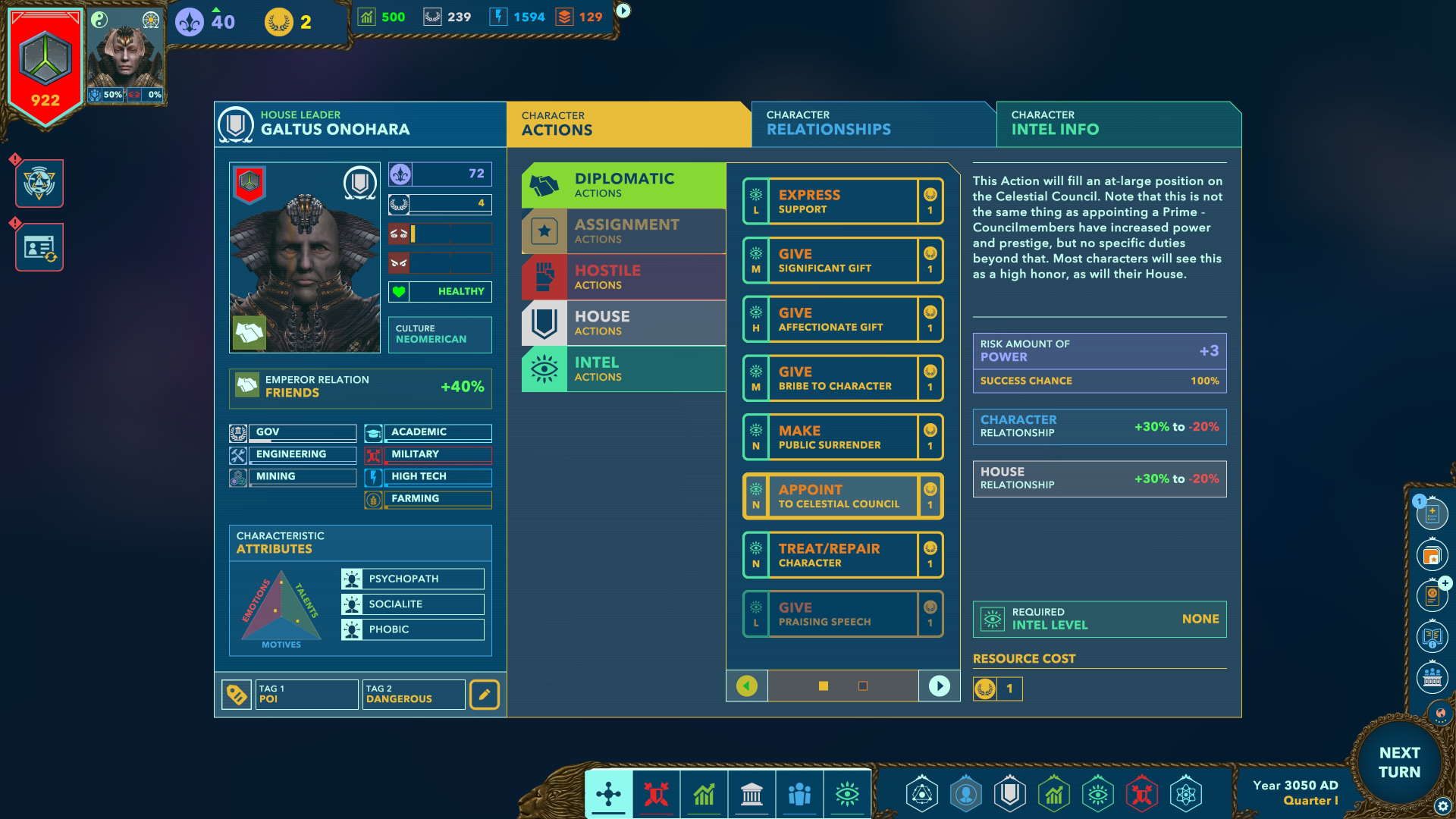 The screen above is the character profile screen for NPCs throughout the world. Every attribute and option under the Sacred Suns is there at your beck and call, a truly impressive set of options. From this screen you can assign actions, spend resources to perform certain actions, view the character relationship stats, and more. This is one menu of things to do, imagine how many options are available across the rest of the game.

What I do appreciate is despite the immense freedom the game allows, it doesn't simply leave the player to their own devices. There are no build queues when setting up projects on a planet, instead loyal NPC members of the empire called viceroys handle all of the planet-level issues. This opens the player up to focus on projects that affect a single system or, as the game continues, the entire space empire.

One of the biggest RPG elements at play here is the player character's Emperor Skills, multiple skill trees that earn the player rewards as they progress through the game. I can set skills in multiple categories including Habitus (which involves my character's intelligence), openness (personality), and more. Simply put, Alliance gives more player freedom than any other game in its ilk, giving anyone who ventures into its version of outer space something to sink their teeth into.

Speaking of outer space, Alliance's galaxy is massive in scale, with multiple systems housing dozens of planets and other locations to visit. Each system is run by a rival house, and depending on whether your relationship with its leader could become a safe haven or a death wish. As the driver of the demo kept moving around space I could not believe the deluge of points of interest scattered around space.

What sets Alliance of the Sacred Suns apart from other 4x grand strategy games is the RPG layer, pulling in elements from strategy RPGs to bolster the experience. By developing relationships and securing partnerships, "skill points" of sorts will be unlocked. These points can be assigned to categories like social fields (diplomacy, literacy, etc.), militaristic categories for building your army (ground units, warships, etc.), and more. The more skill points are assigned to these events, the more skills you unlock and benefits you receive. Few other grand strategy games offer that sort of system, but it's an idea that could pull RPG fans in to give this a shot.

There's a lot of game here in Alliance of the Sacred Suns, more than I was able to parse in the ten-minute window I had to watch it. However the idea of planning a takeover in a gigantic galaxy like this is worth digging into, as the multiple systems it offers give near-total freedom to the player. This is an Alliance we're happy to join up with when Alliance of the Sacred Suns launches later this year on PC.