I don’t know how Dual Universe has gone unnoticed on my radar for so long. I remember reading something about it a long time ago and thinking it sounded like something up my alley, but some other shiny object caught my attention and it slipped out of sight. So when Dual Universe entered Open Beta, and the opportunity to check it out was offered, I jumped on the chance to see what developer Novaquark has been up to. I have to tell you, they’ve been up to a lot.

Dual Universe is a persistent universe space MMO. Like Eve Online, the economy will be fueled by the goods produced and traded or sold by the players themselves. Dual Universe incorporates a voxel based sandbox, though, so players won’t be creating just the economy, they will have to create the cities and infrastructure of the galaxy as well. The building interface allows you to create whatever your imagination can come up with, including anything from a simple house to hovercraft and spaceships,  all the way up to large buildings and gigantic space stations. Players can even use the Lua programming language to create scripts to further enhance their creations. 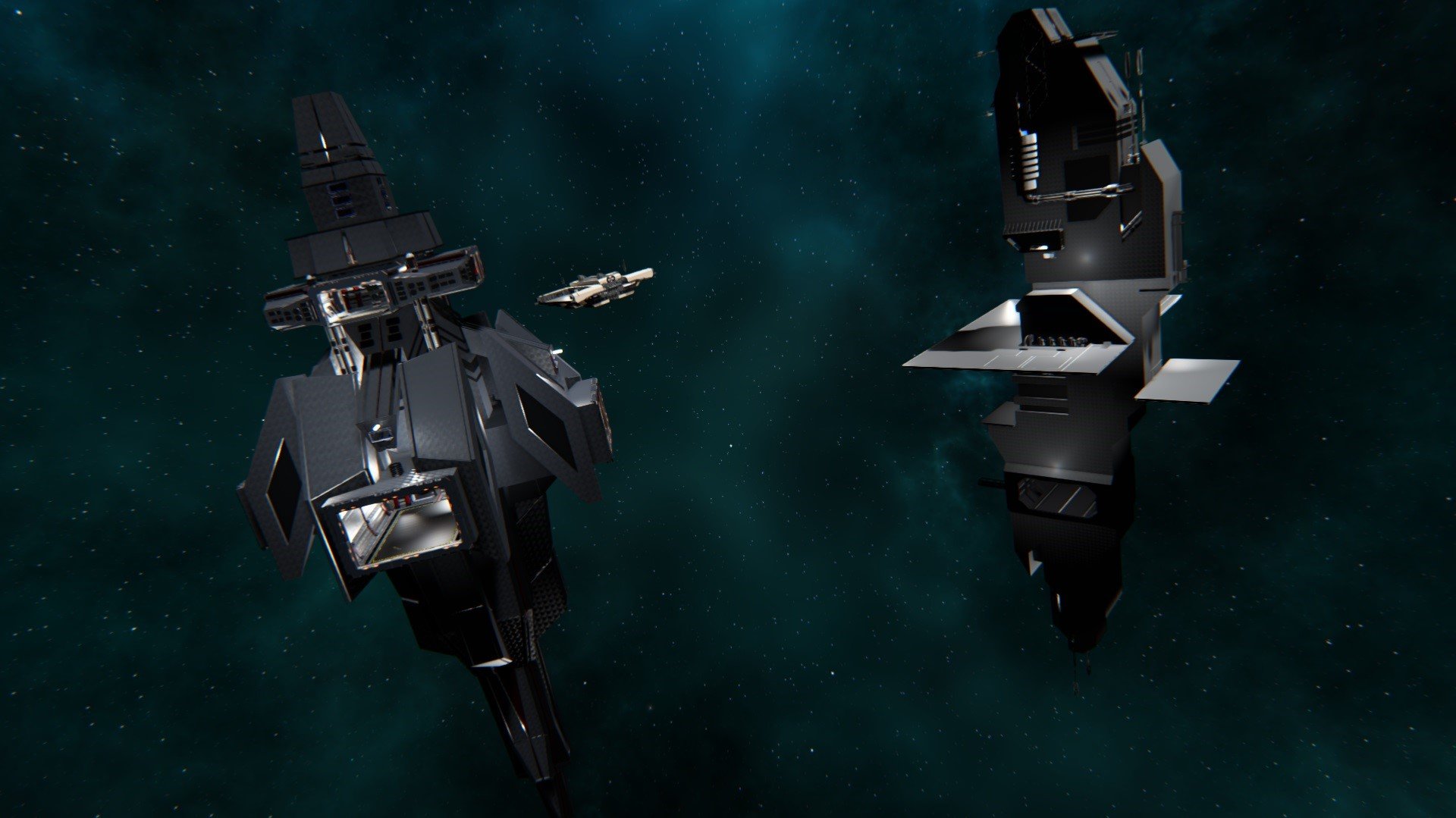 Space Stations like these aren’t developer assets. They were made by players during the Alpha.

Visually speaking, Dual Universe is a mixed bag. Your voxel creations, whether buildings or ships, can be extremely detailed. The toolset used for creation is robust and allows you to place anything from a single block to larger groupings. There are several default shapes to use and these can all be scaled in size. There are several additional tools  to quickly make other shapes, like the line tool to create angles and  the smoothing tool to round off any rough edges. Portions of voxels can be embedded inside other blocks and, with the addition of prefabricated elements, anyone with a bit of artistic vision (not me, a Borg cube would be my masterpiece) could put together a visually stunning building or spaceship.

Planetside, the visuals are still a work in progress. There are some basic textures for grass and trees and things like that but they aren’t anything to speak of, yet. As soon as you jump into a hovercraft and get a few feet into the air you learn just how short the object draw distance really is. And as you start moving at anything faster than a walk the textures will begin popping in and out of view. This aspect is obviously a work in progress and one of the items listed on the developer road map. 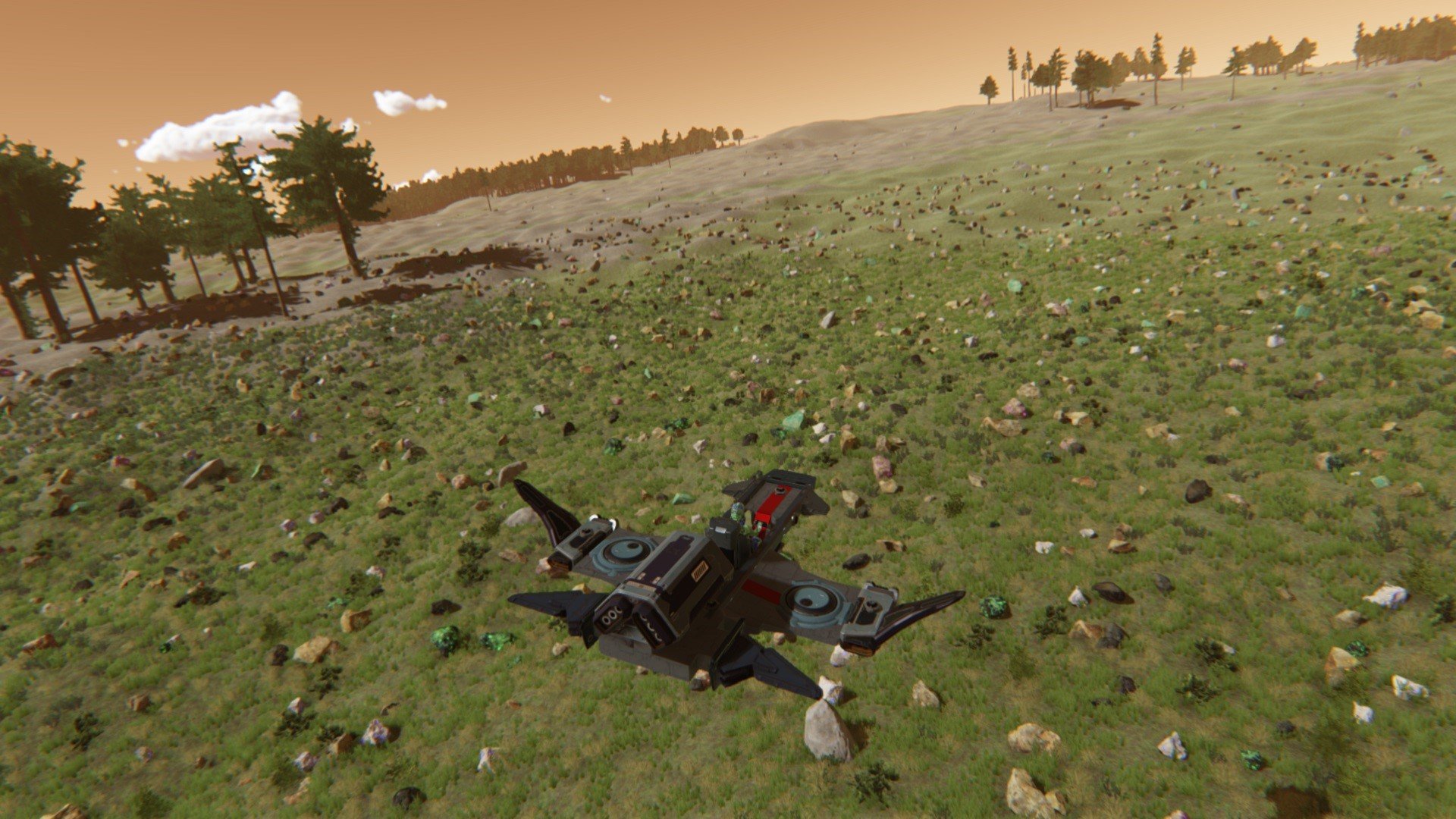 Beyond your ship the graphics still need some work.

The typical character classes of other MMOs have been replaced with a talent system, allowing players to focus on a specific area of expertise. There are eight categories ranging from economy based skills like mining and industry to combat focused areas with specializations in individual ship subsystems like weapons and piloting. Each category is further broken down into further specializations, with each of these having a handful of specific skills to master. With each skill having 5 tiers it would take players years to master every skill in the game, making the formations of organizations (you can belong to multiple groups) a must if you plan on having a part in molding the universe.

When it comes to industry in Dual Universe, Novaquark is swinging for a home run. Your first foray into gathering resources is the typical survival game method of gathering minerals from the surface. Once you turn on your scan tools and start hunting for ore veins things get a lot more interesting. After triangulating the location of a deposit it’s time to start digging until you hit paydirt. The whole system is pretty easy to use and allows you to gather large amounts of resources if you’re willing to go digging for them. The terrain deformation tools used in mining work similarly to other voxel games - adjust the size of the hole you want to make, point your tool, and start boring your tunnel. 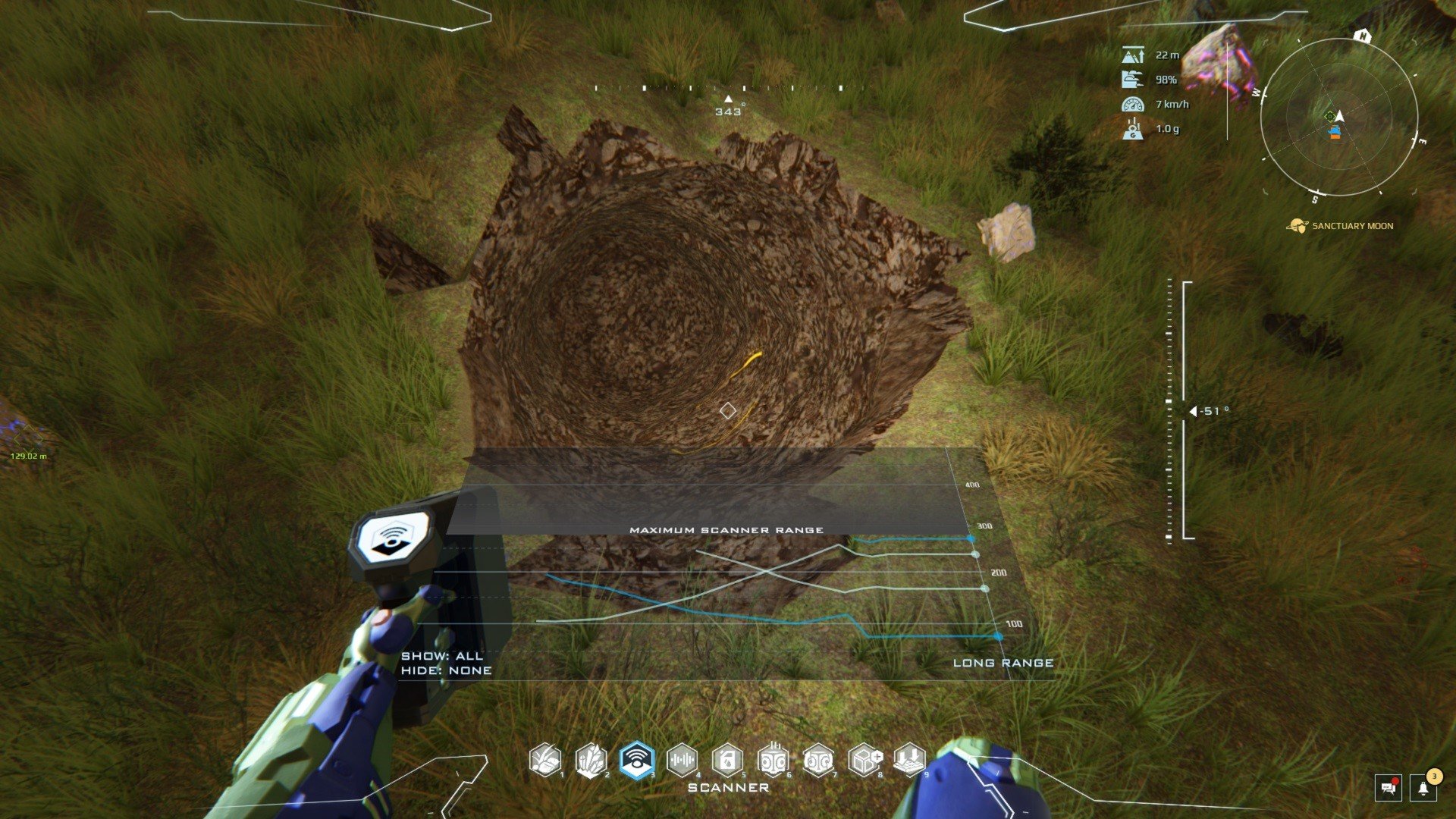 Hide and seek. I should find profit down this tunnel.

Once you start getting into the production side of things the complexity ramps up quickly. Again, the production mechanics work similar to other games - feed resources into a refiner, link that to a fabricator, link to another fabricator, and so on until you output your final product into a storage container. It sounds simple at first but there are byproducts that can fill up your storage containers and shut things down, not to mention that managing the wide array of fabricator types and their multitude of inputs and outputs can quickly become a logistical nightmare. I’ve barely scratched the surface and I am loving every minute that I spend banging my head against the wall as I try to get everything to work properly.

Novaquark has also set their target high when it comes to ship building. With a full physics model, how you outfit your ship will determine its flight characteristics. Too much weight and not enough lift means you’ll never achieve flight. You also have to take into consideration the different elements needed to achieve space flight versus a craft designed solely for atmospheric flight. 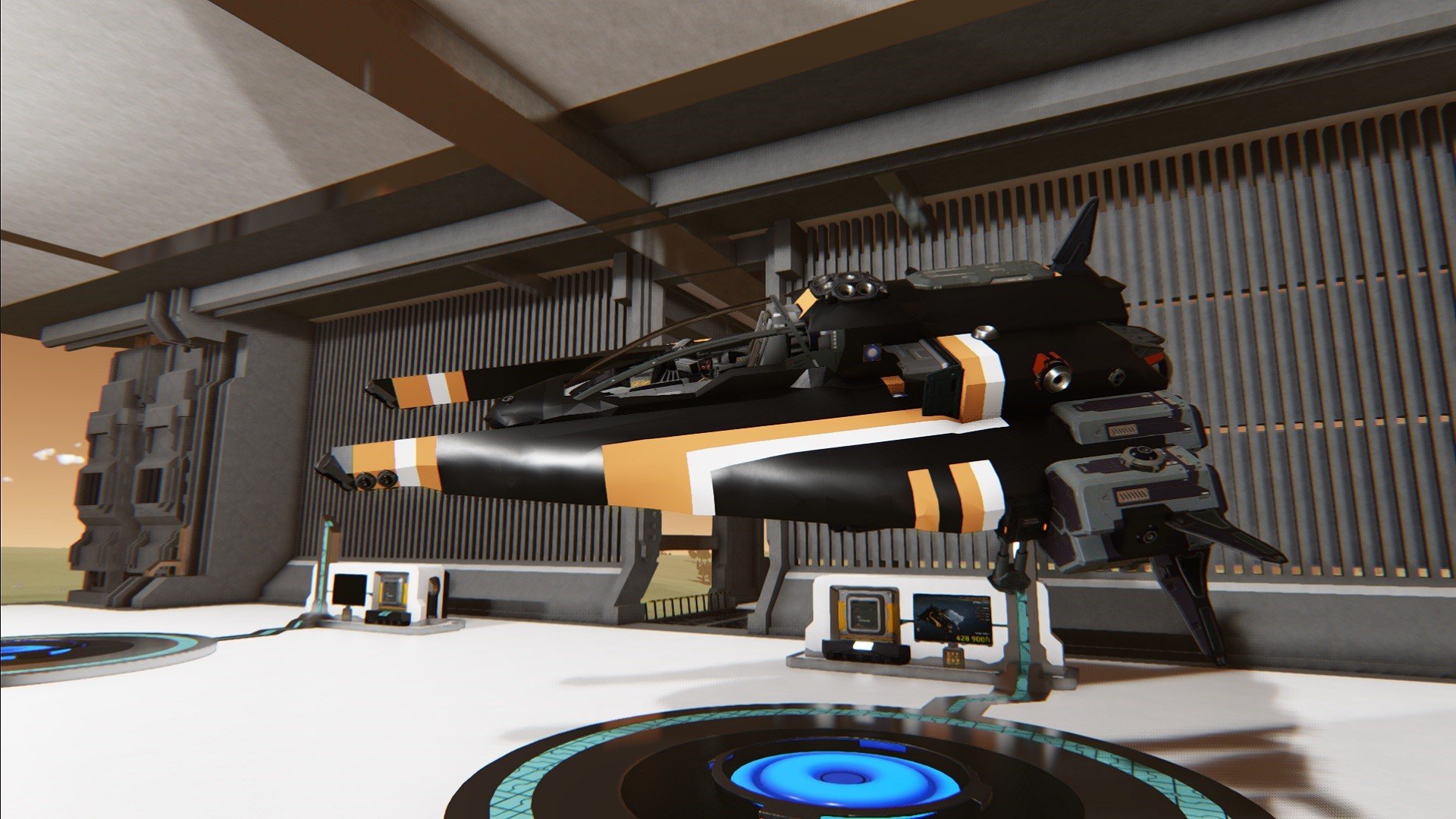 I have to buy a ship like this but anyone with talent could make a better one.

Like in the real world, the different alloys in Dual Universe have their own unique weight and durability so the materials you use to create your ships will factor into their maneuvering characteristics and survivability during combat. There are multi-crew ships that take advantage of those specialized talents I mentioned earlier. All of these things added together mean victory isn’t determined by a simple calculation of who has the most armor and biggest weapons.

Closed beta. Open beta. Pre-alpha. Early access. I know that in 2020 all of those terms are flung around looser than they used to be, but it's really hard to swallow describing what Dual Universe is right now as an open beta product. When I hear the term open beta I think of a game that's almost complete; there are still bugs to squash and textures to touch up, but the team is working on the fine details, not working with broad strokes of the brush. I don’t think that’s where Novaquark is at with Dual Universe.

All of the deep, complex mechanics that Dual Universe has to offer are currently hindered by a bunch of bugs, optimization issues, and unfinished graphics. A perfect example of this would be the tutorials the game suggests you complete. I headed over to the Mining Academy and saw that there was a tutorial on upgrading your hovercraft. Thinking I could use a little help in that area I decided to give it a go. When I teleported into the tutorial I was on the surface and high above me was the actual tutorial. I couldn’t reach it to complete it. I logged out of the game a few times hoping it was just a glitch but each time I re-entered the tutorial the same thing happened. I just moved on to something else but I could see someone logging out and not coming back. 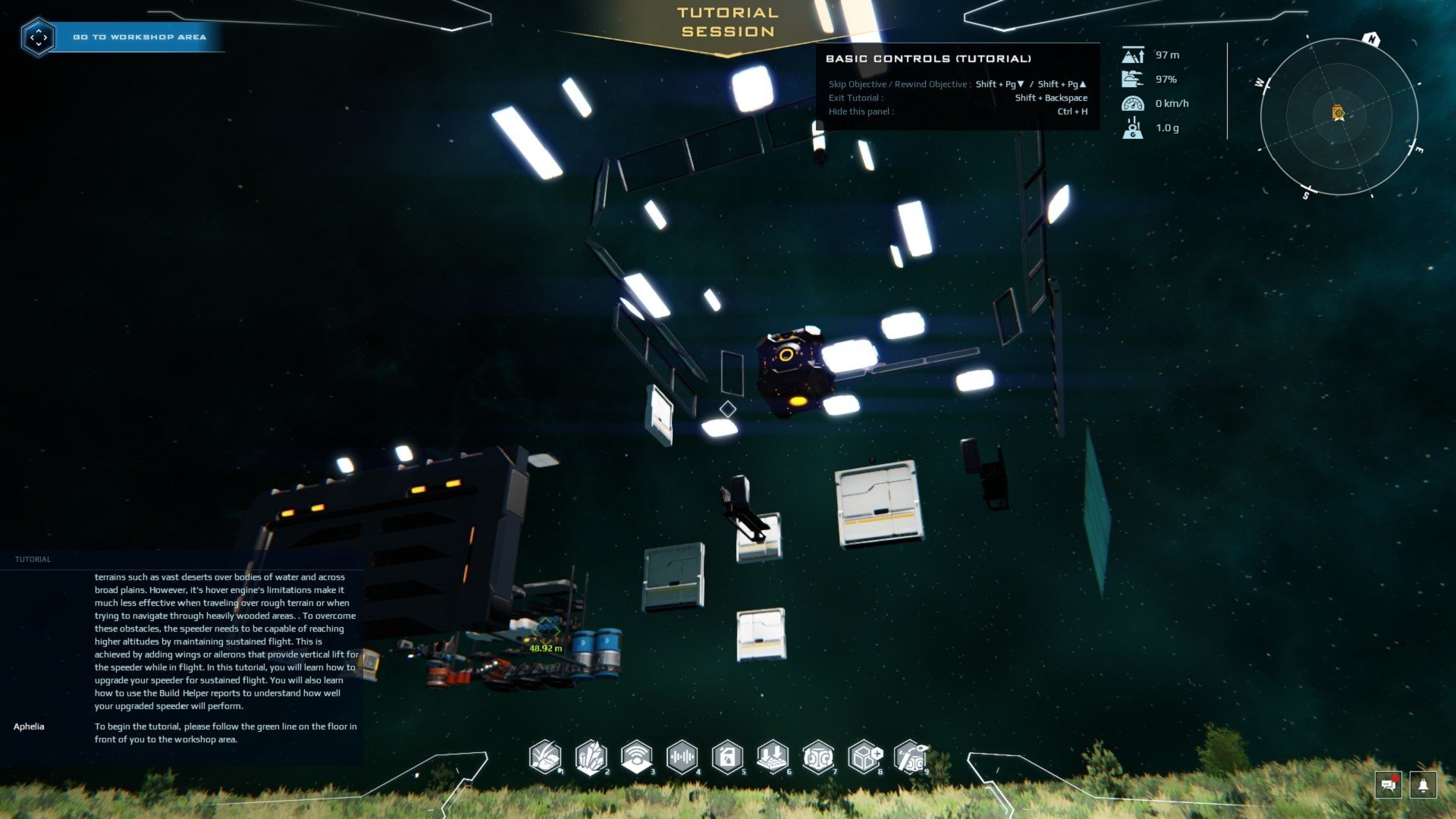 The floor in this tutorial is missing. So are the walls and ceiling.

That’s not to say that Dual Universe isn’t worth checking out if controlling the universe through industry and combat are your type of thing. There is already a lot of depth in the systems that are in place and Novaquark still has a large laundry list of additions to implement.

That overall “under construction” vibe is my biggest concern about Dual Universe being in open beta, especially with a monthly subscription being charged. Even at the modest price of $6.99 a month, I can see people turning sour on the game in its current state if they buy in thinking they are getting a fairly polished experience for their money. Just calling it a closed beta or early access could temper their expectations and keep everyone playing as development progresses. 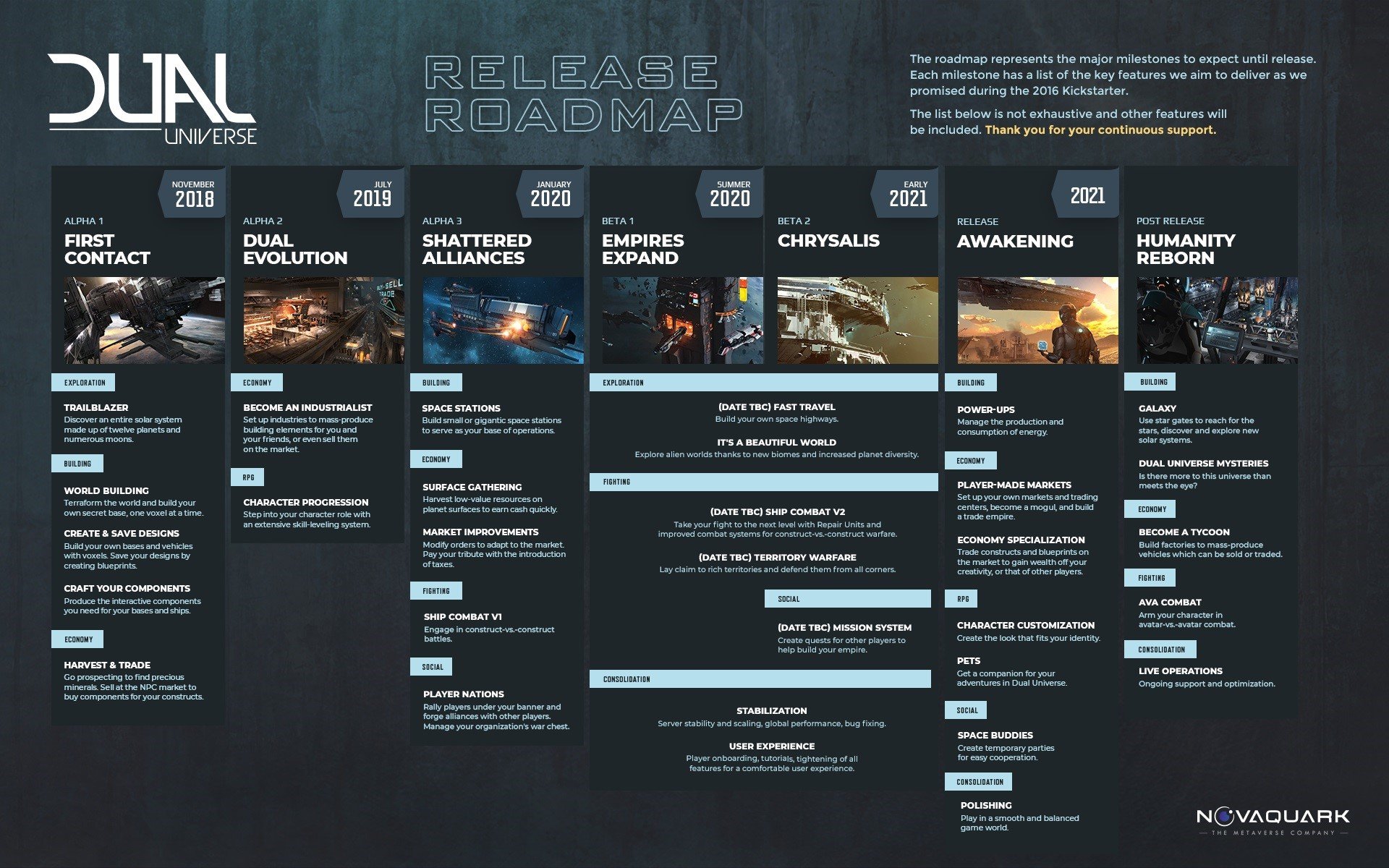 With that said, I have thoroughly enjoyed my time with Dual Universe so far. Novaquark has picked quite a few elements from the single player and small group co-op games that I enjoy and, with such a large scope, the game has the potential to draw in a very large player base. There’s still a lot of work to be done before Novaquark realizes the grand vision they have for Dual Universe but if they can keep hitting the milestones on their road map the final product will be worth the wait.