Since being founded in 2015 development studio Lucid Sight has been an innovator in what is coined the “Play To Own” frontier of blockchain gaming. For those unfamiliar with the concept, blockchain games integrate a crypto currency, like Ethereum, into the game to improve the security of the in-game economy and aid in the secure transfer of goods from one player to another. It’s been almost a year to the day since Lucid Sight brought its blockchain-based space MMO, Crypto Space Commander (CSC), to Steam Early Access. With CSC launching out of early access on September 3, we were given the chance to preview what CSC has to offer. What I found were some interesting tweaks to the common exploration, crafting, and combat that the space MMO genre is known for.

Many space games allow you to customize your ships with a rigid system that only allows fitting specific systems in a set number of available slots. CSC opens up this system to allow players to fit ships as they see fit. Each ship class grants a buff towards a specific specialization but, beyond that, it is up to the player to outfit their ships as they see fit. 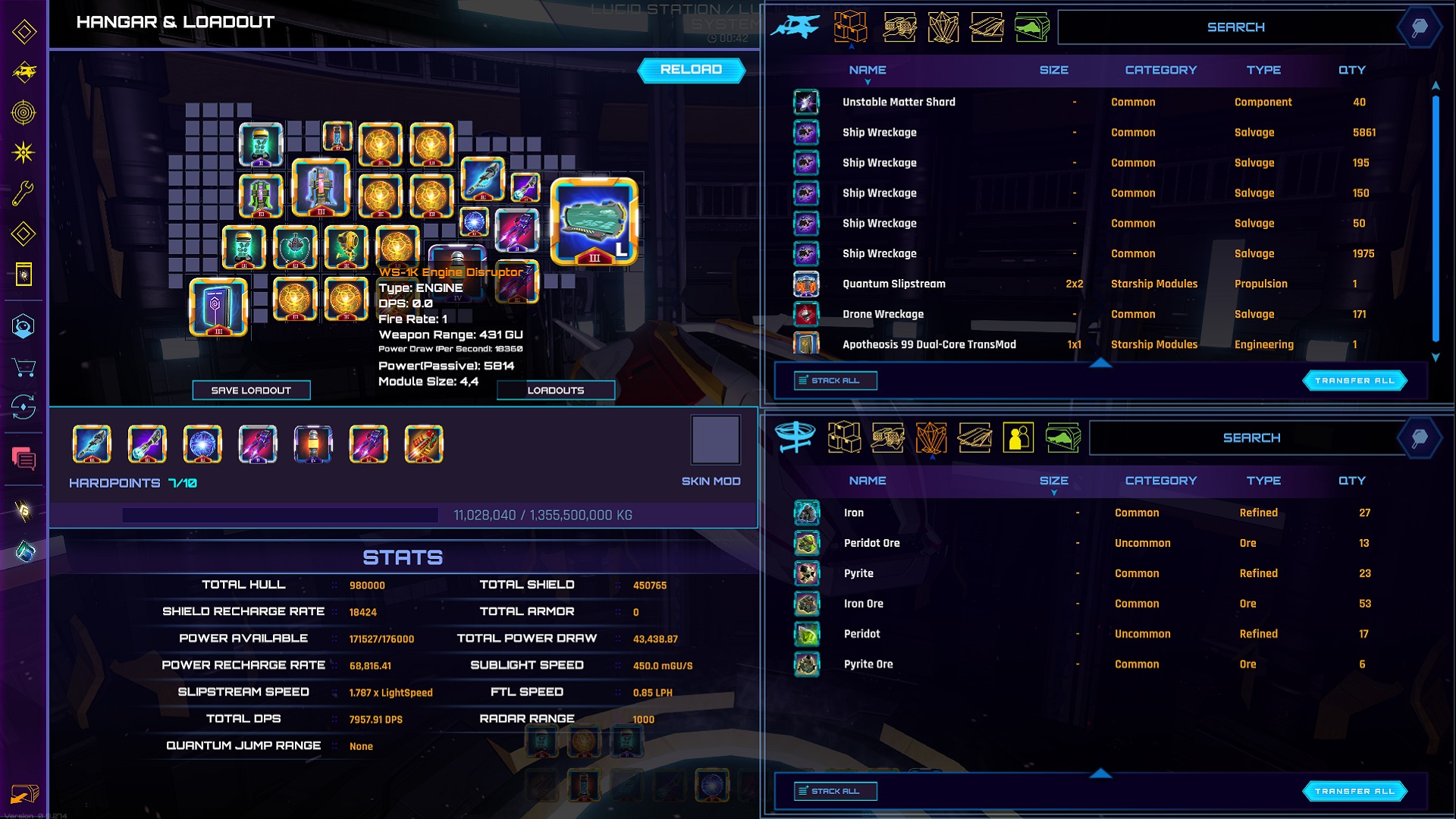 The interior of each ship is broken down into a grid and players can place their modules into any open slots. Low tier modules will only fill a single grid slot while more powerful equipment requires more space. Ships vary in size from just a few blocks all the way up to Dreadnaughts with well over 100 blocks. With a limited amount of space and a maximum weight to work within players must decide how to utilize the space given. Do you risk forgoing any weapons or shields to maximize cargo space on a mining ship? It’s up to you.

All players start as a new recruit in the ranks of the Galactic Federation. Part of Core Space, Sol is where you get your feet wet before launching out into the galaxy. Core Space is primarily a PVE area, but that doesn’t mean you are safe from danger. You will still encounter pirates as you gather resources and grow your fleet of ships. As you move further out into the galaxy you eventually reach the systems of Fringe Space. Just like any space movie or game that has a Free Space, Outer Worlds, Rim Worlds, or whatever you want to call it, Fringe Space is beyond the control of the Galactic Federation. For players, this translates into the chance for PVP. As players will be able to build their own space stations, you can expect to see hard fought battles out in the Fringe.

Movement through the solar system is done with a point and click type of interface. Simply click on a spot in space and your ship will move towards that spot, stopping once it gets there. It’s very inaccurate but works well if you are hopping from asteroid to asteroid while mining. There is also a hold and drag option that allows for more precise movement, but taking full control of the ship’s movement worked best for me. After resetting the movement controls to WASD I was quickly navigating through space like a pro. 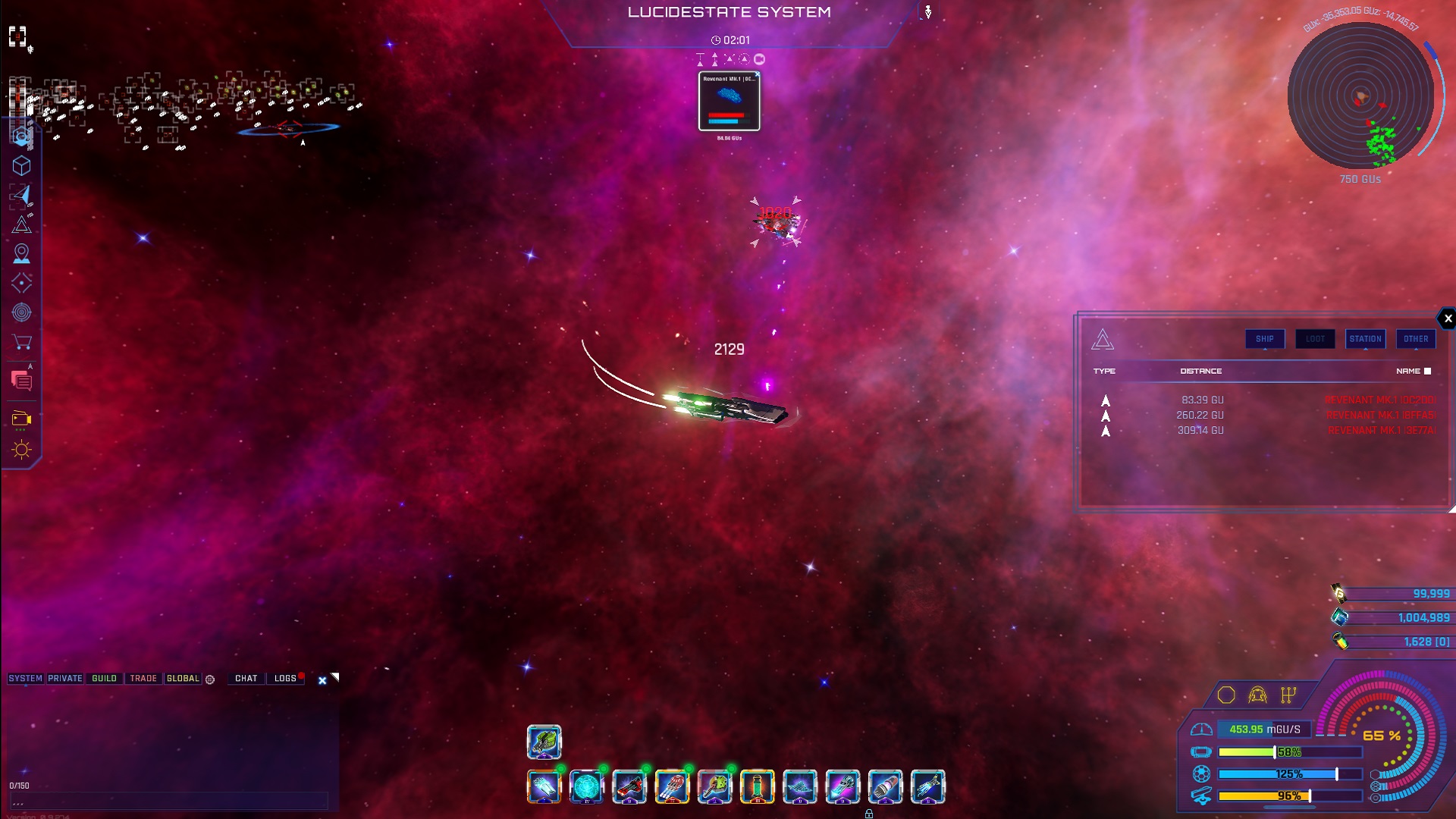 Subspace movement in CSC felt a little peculiar at first. Each system is represented in a 3-D view but movement is only allowed on a flat plane, initially giving CSC a board game feel. The point and click movement option furthered this feeling. Once I took manual control of my ship during combat the rigid feel of grid based flying lessened a bit.

To Infinity And Beyond

Subspace travel is all but useless outside of moving from asteroid to asteroid and combat due to the vastness of space, so all ships are capable of faster than light travel. FTL speed is measured in LPH, or 1 light year per hour. Smaller ships have a higher base FTL speed than larger ships, and this can be increased by the addition of engine modules to your ship. 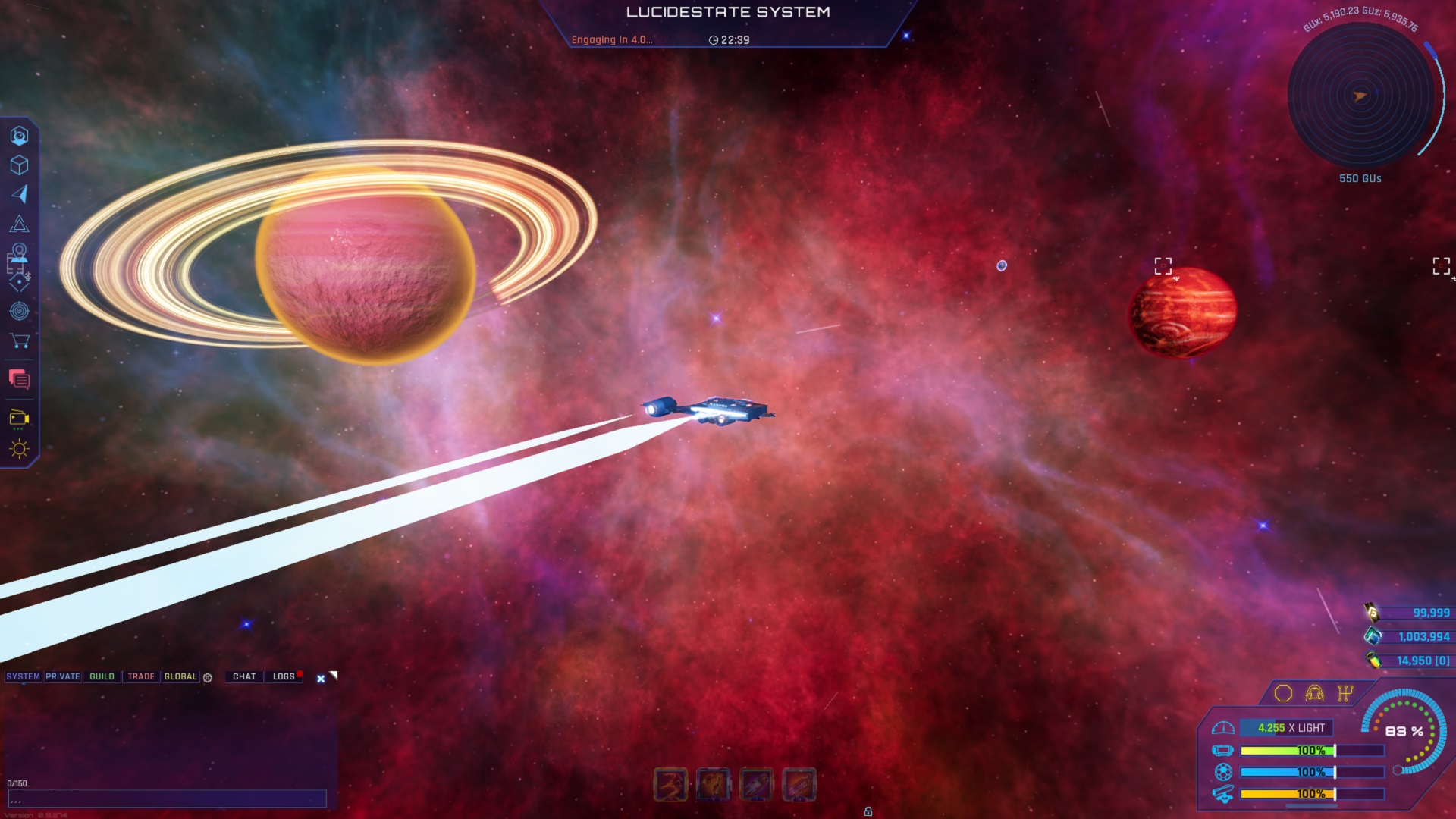 Traveling from one system to another using FTL can still take hours. Fortunately this time can be reduced to seconds with the use of a Quantum Jump Drive. These special modules will be the key to quick travel throughout the galaxy and a must for anyone wanting to build a large trade network.

Combat - Show Me The Power

Without a vertical element, movement in combat is fairly simplistic and all of my battles ended up with me orbiting enemy ships or flying in a straight path to keep multiple enemies out of range. This left most of my time in combat centered around power management. Each offensive and defensive module can be activated individually, and not having enough power available to activate a module at a critical time can lead to a quick demise. You are able to adjust power output to the three main systems on your ship - engines, offensive modules, and defensive modules - to give an energy boost when and where you need it.

Lucid Sight has gone hard into the realm of crafting for CSC. Almost everything in CSC can be researched and crafted by the players, and follows the mine, refine, and craft paradigm of most MMOs, but Lucid Sight has expanded upon this in a few different ways. 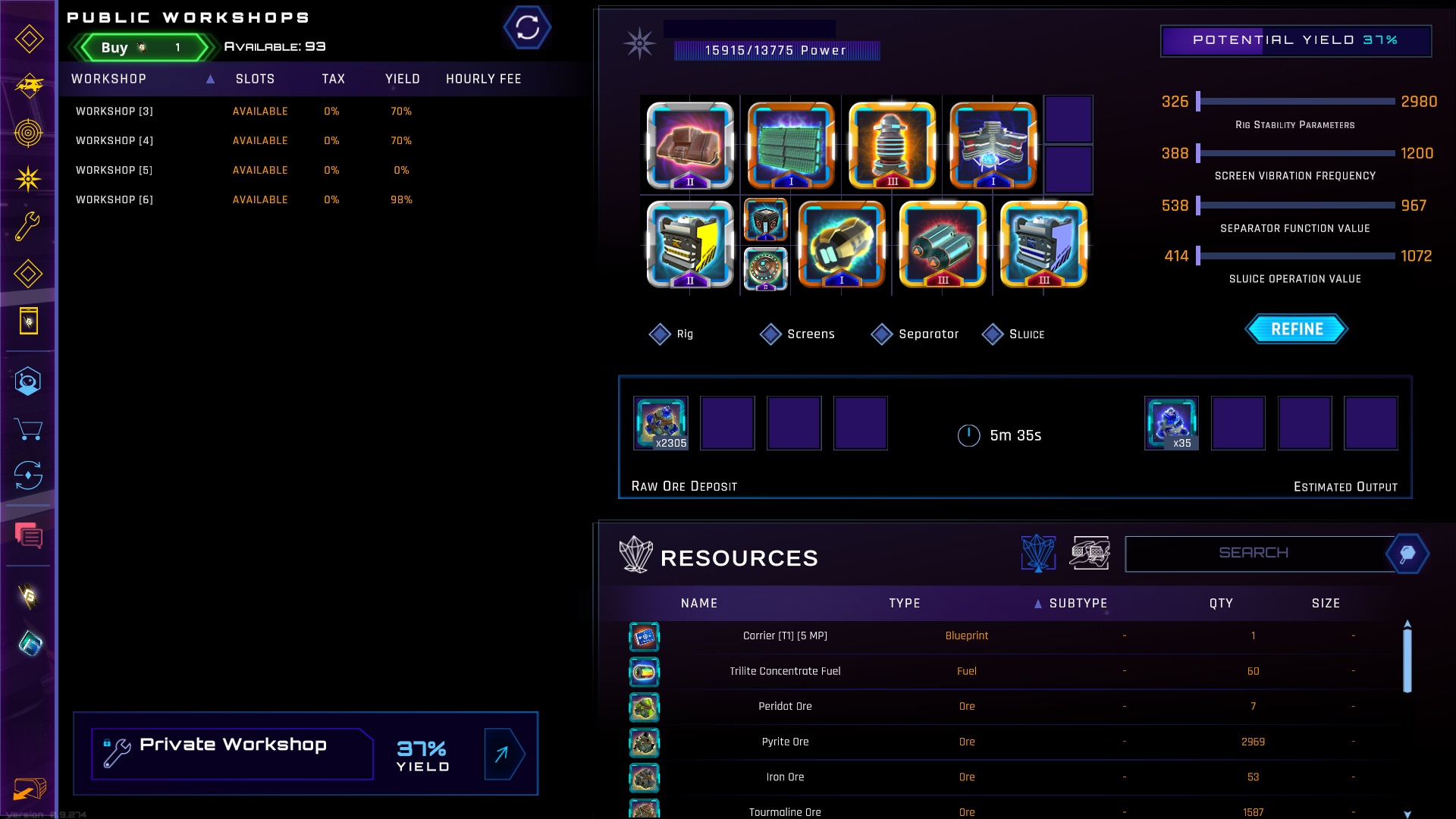 This One Ore That One

Mining can be as simple as heading to the nearest asteroid belt and drilling away. This is a rather crude use of your time, though. Each mineral in CSC gives off its own spectrum signature so adding mining scanners to your ship will help you hone in on the good stuff.

Once extracted you then take the ore to a workshop for the refining process. Public workshops are located on stations and can be used for a fee. Players can also purchase their own workshop on a station (and charge other players for its use) or fit a ship with the necessary modules for refining. The modules, like all other modules you use to outfit a ship, come in various power tiers and affect the yield of your product.

Blueprint points, gained through the dismantling of items, to learn how to craft an item . Once you have the basic knowledge to craft a tier 1 item you are able to craft away, but furthering your knowledge of that item will open up higher tiers. The goal of every crafter will be to gain enough blueprint points to increase their chance of discovering higher tech levels for a given item. CSC has an open ended crafting system, allowing players to continually improve their craft. In doing so, other players will seek these ‘master crafters’ and their high tier fares.

Usually a crafter is finished once their product is sold and money is collected. CSC doesn't stop at this basic MMO level. Instead, crafters are able to collect royalties on their product from all future sales no matter how many times an item changes hands. I suspect this incentive to produce high quality in-demand items will keep crafters busy for quite some time.

CSC utilizes the Ethereum blockchain to manage game assets. Players are able to buy and sell items using the in-game currency, but you can also use Ethereum to pay for transactions.Each asset is assigned a unique key, providing a level of security not seen in regular game economies. This also helps to enforce transactions to enable worry-free trading with unknown trading partners. Lastly, with assets attached to the blockchain, players own their items and are able to perform out-of-game transactions.

The space genre has always been a tough nut to crack and it is hard to ignore the many parallels CSC has to the current king of the hill, EVE Online. With that in mind, Lucid Sight may have a tough battle ahead of them. The simplistic subspace flight mechanics take a little bit to get used to but the gameplay is sufficient given the non-flight sim combat and focus on power management. Only time will tell if the security of the Ethereum blockchain behind CSC's "play to own" premise and potential for out-of-game transactions will bring in the player base needed for the game to thrive.