Conan Exiles has been generating some buzz with their upcoming patch Age of Sorcery, and I was lucky enough to sit down with Dennis Douthett (Lead designer), Tor Egil Andersen (Senior Content Manager) and Natascha Röösli (Senior PR Manager) and take a quick spin around what’s coming up and how it works. Curious?

There are more than a few questions lingering around Age of Sorcery and just what it will mean in a number of areas, I’ve tried to get information on most of what I saw as the big issues that most fans seem more curious about, or at least as much as I could within the given time frame. I’m sure people will forgive me if I don’t have anything more specific, because I’m hesitant to be specific unless I can get several hours into content, and that wasn’t an option…yet.

But, generally, when fans of Conan Exiles start talking about the upcoming Age of Sorcery update, the concerns can be divided into three main categories: How the Sorcery will work and affect the game, the effect of the upcoming attribute rebalance, and, of course, the Battlepass. I’ll do my best to address those with what I saw and had a chance to ask questions about, but again, you’ll have to forgive me if I can’t be too concrete about certain aspects because I had a lot to see and only so much time to try and kick the tires.

You can rest easy, this is not going to be themepark MMO magic. You won’t be throwing out your tenth lightning bolt to take down a pack of hyenas or throwing glittersparks at enemies. Sorcery has been implemented with a keen eye to the lore of Conan, namely the fact that magic takes time, resources, and corruption. You’ll be engaging in your own gruesome ritual sacrifices and stealing souls for no other reason than to unlock enough power to cast your spells, all the while corroding your very being in service to dark powers.

It’s not that there aren’t combat spells, though, don’t get me wrong. There are, but the process of casting is not short and it’s easily interrupted, so while you can cast, and there are damaging spells, they’ll be more of a combat opener unless you have a team to keep enemies off your back. When casting, you need to either select a spell from floating runestones, or corrupt to the next tier and select from the next tier of spells, and while it isn’t a drawn-out process, it isn’t quick or snappy and you likely won’t be repeat casting in combat, but returning to your trusty sword, axe, maul or whatever weapon of choice once enemies close.

Besides Combat spells, there are also spells to grant you minions that aren’t thralls. I was cautioned, though, that while the demon pets you can conjure are more powerful than thralls, they have a bloodlust that means if your body count dips too low, they can and will turn on you. So if you’re planning on running around with demons in tow, it might be best to either make sure there are a lot of bodies around you, or you can subdue what you summoned. I don’t know if the undead, the other form of servant, has similar drawbacks, but I suspect so, be it timed or merely the weaker of the options.

Then there are utility spells, which include harvesting from a large area, a hands-free light source, and a means by which to hide the marks of corruption that have become visible by your dabbling in the dark arts-which can be handy if you’re not keen on walking around looking like an incipient Palpatine in all his pasty, veiny glory.

All in all; yes it’s still appropriate to Conan, some of it will take some adjusting, and you can absolutely roleplay your own personal version of Thulsa Doom if that’s your thing. There will obviously be some issues, since flying will be a thing, but I don’t think it will take the playerbase long to adapt, and I didn’t spot anything obviously game-breaking on my brief look.

I’m not sure how I feel about this one because I didn’t have the time to get deeply into the nuts and bolts but by and large, I agree with Dennis and Tor Egil when they said that it was implemented to allow for more depth and versatility of builds. It certainly looks as if it will, and as someone who loves to work on builds and have a variety to pick and choose from, it does do a much better job than what currently exists.

Some attributes have been renamed and others have been split and the difference merged with others. There are more choices in perks, though, having looked at some of them, I’m not sure I appreciate the rearrangement of precedence some-I’ll have to see how they work out in a longer play session, honestly. The ability to corrupt attributes looks to be a lot of fun, though, having played only briefly with sorcery as a maxed character, I have to wonder if it might not really be an option for characters until at least mid-levels, maybe later. Again, something I can’t be sure of short of a much longer and independent play session.

In summary, it looks like it’ll afford more options and replayability for people who like to tinker with builds like I do, but as I was running around at max level getting a little bit of a peek at everything, I can’t be sure. Come back two weeks after it launches and maybe I’ll have an answer.

Oh boy, has this had some controversy. The first things that players should know is that everything contained in the update is free, battlepass or not. You won’t have to pay anything to get access to sorcery, corruption, the attribute rework, or the new events (we’ll get to those). All of the nuts and bolts and crunchy bits are absolutely 100% free.

So what is the Battlepass? It’s a system you can buy into for the cost of a single unit of currency, not one and a third, or one and a half, but just a single unit-there aren’t any sneaky bits on the payment here, asking you to buy another lot that will just sit and gather dust. For monetization, it appears that it will be $10, and that each Battlepass will last for three months - that’s if there aren’t changes between now and launch, of course. 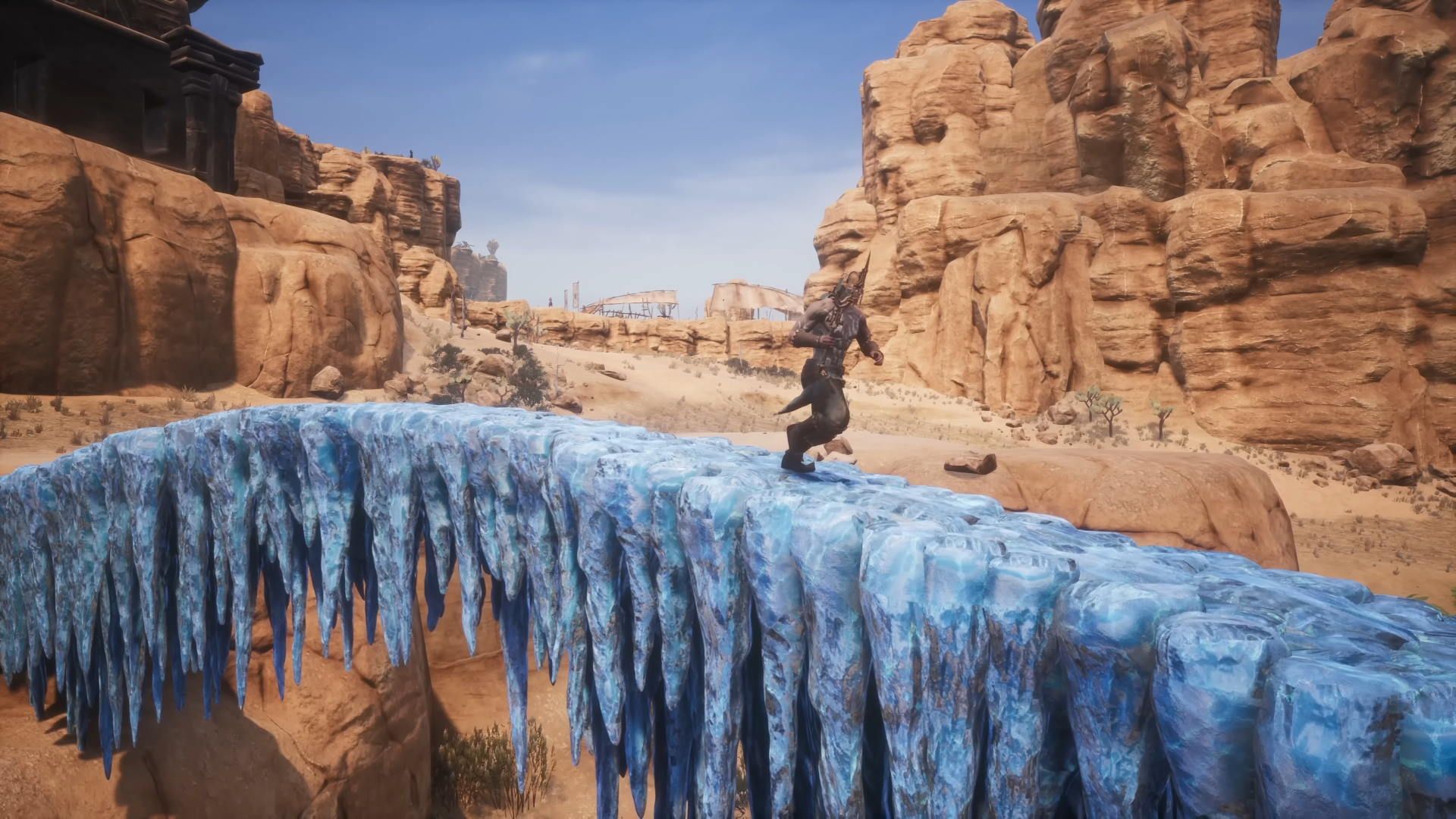 Sadly, no, you will not be able to go back and play through Battlepasses that you missed, but I was told that the general metric was that someone playing only two hours (I assume as an estimate) a day could easily complete it within the time allotted. There will also be a daily small XP reward for free, and the first few challenges each day will offer double XP to put towards the Battlepass levels.

Some have noticed that there were armor sets and pets (besides building pieces and currency) in the Battlepass, and it was confirmed for me that they are skins only. The armor works like all the armors in prior DLCs, where the stats are the same as iron/starmetal stats, and you will need to craft each set with the requisite materials. In effect, they’re just for appearance. No, no one is going to be getting a mechanical boost from buying into a Battlepass.

That’s not to say there won’t be FOMO.  You just won’t lag behind stats-wise for not having the Battlepass. You will, however, miss out on some pretty nifty skins, I was especially fond of some of the pet skins. If you like collecting appearance items or having your character look cool matters to you, you won’t want to miss out if you can avoid it.

The new update won’t include an expansion to the map or a new map, but it does introduce new dynamic events. These are events that will spawn across the map for you to either avoid or get involved with. The one we played with involved interrupting a ritual that culminated in a very angry demon showing up and needing to be killed. Because we were just there to look around, everything was maxed and then some, so we made short work of it, and I was assured that in real play it would be a much bigger challenge, so if you PvE in groups, there’s another thing you can look forward to searching and doing together. If you PvP you might want to make sure you’re not going to have to deal with enemies once you trigger one - or maybe trigger it and run the boss to your enemies’ camp. You do you. 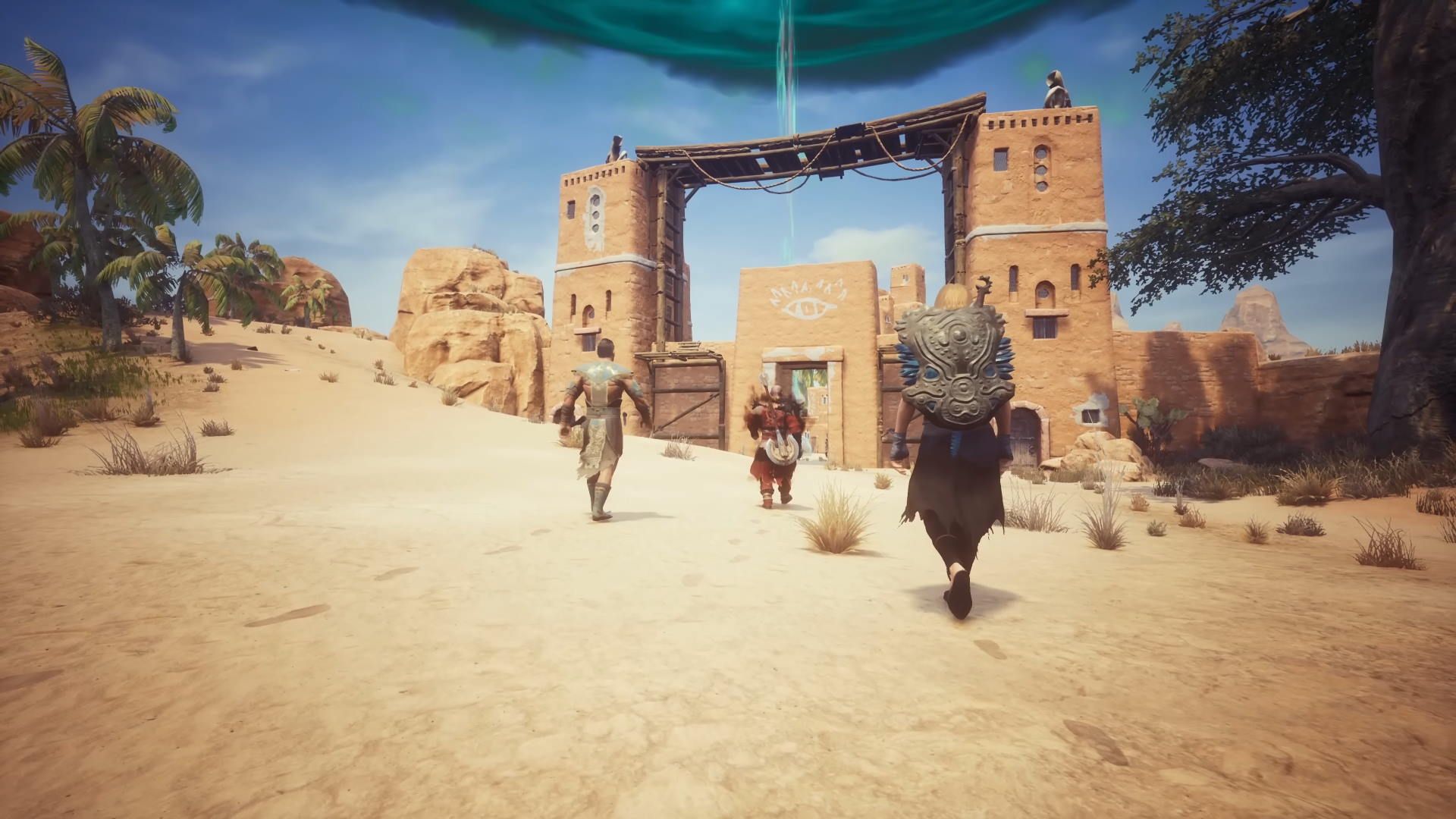 There were also some concerns about transmogs-referred to as “illusions” while I was in game-about how they might work and whether they would be category agnostic, or if you’d be stuck with only cloth armor appearances on cloth armor, metal for metal armors, etc. At launch, they’re expected to come out bound to categories of armor, but that will change shortly after so that any category can use any skin. This was explained so that players would no longer be stuck with picking a less than optimal armor because of appearance, and while it may have a minimal impact on PvP, it couldn’t be a significant one, since once someone is in combat, you’re more concerned about not dying than you are about what class of armor they’re wearing. But, if you’re someone who hides in the bushes and surveys your potential opponent before you go into combat, you might want to be aware that looks can be deceiving.

I expect there will be more than a few who dislike the change, but I have to admit, I’m biased. The idea of someone baiting newbie gankers by appearing to be wearing nothing and having newbie weapons and then surprising them with top-end gear and weapons? It makes me laugh inside. I’m not ashamed to admit it either.

So-what did I think?

All in all? It looks like a solid update, and the Battlepass replacing the mini cosmetic DLCs seems like a good choice to me, mostly because there’s more in the Battlepass than the DLCs usually had, it’s cheap, and it’s what will now be funding future content updates, because devs don’t work for free. Everybody has bills to pay, and this isn’t a bad way to do it. I do wish I’d had more time to kick the tires so to speak, but we can’t always get what we want, and in a way, it’s nice not to have too much exposure, so I won’t be spoiling the play for myself when the update does land.

I suspect that Age of Sorcery will largely be well received by most Conan Exiles players, with of course, the same sized small group who loudly complain about various details or features they absolutely cannot stand. Maybe different people, but roughly the same amount of complaints. Yes, there’s going to need to be some adjustments, but that’s normal for any update in any game now, and while I didn’t get an in-depth look at things, what I saw looks good. It didn’t knock my socks off, but I didn’t expect that. It did feel like a good addition to the world, as if it added some needed depth and lore without pointless filler, and that’s always a plus. I can’t be certain, but with what I saw…it looks good, and I look forward to playing around with it when it launches on September 1st.