Only a few short months later we find ourselves in the same place, warily looking over our shoulders at a new MMORPG on the horizon for PC: Bless Unleashed. Just the name Bless is probably enough to make some people shy away from the series, because of the bad taste left in their mouths from its predecessor. Bless was, and still is, a constant reminder of what could have been in the form of another game to bite the dust in my Steam library. Even with the closed beta being free, I was still hesitant to waste storage on the title. What I walked away with, was a surprisingly satisfying experience that I’m warily excited to continue when Bless Unleashed finally launches. So, what’s different this time, and is it actually fun?

If you followed Bless Unleashed’s initial launch on the Xbox One and kept up with our coverage, then you’re probably familiar with the new developers for the game. Instead of Neowiz, this time we’re treated to the developers over at Round 8 Studios. Like Bless Online, Bless Unleashed continues to use the free-to-play business model. While I unfortunately do have plenty of experience with what was Bless Online, this was my first time jumping into Bless Unleashed.

While character creation feels a little toned down, there’s still a ton of customization and sliders to play with. What is probably the most concerning for players, is that all classes are race-locked to either one or two options. 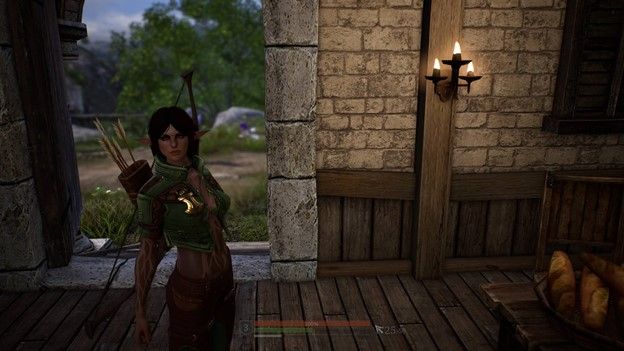 For example, if you’re a fan of playing a giant axe-wielding human barbarian (my race/class of choice in D&D) then you’ll probably be sorely disappointed to learn that you can only play the Berserker class if you roll a Varg. Most of these locks are justified by the race’s lore, but it still doesn’t make it sting any less when you must stare longingly at your dream combination from behind a glass pane.

Immediately, the first thing I noticed upon leaving the tutorial is that the world feels much more colorful and alive, and not just because of the influx of new players during the closed beta testing. The details in the main city’s market alone gave me the feeling of walking through a single player RPG as opposed to an MMORPG. The market stalls look much busier, with loads of NPCs and crates overflowing with goods to sell. Each asset looks like it was placed purposefully, as opposed to just throwing something down for the sake of decoration. Some of this could probably be attributed to Unreal Engine 4, as opposed to the previous Unreal Engine 3 that Bless Online was released on.

However, I’d like to think that this new development team prides itself on focusing more on worldbuilding and the potential of the world of Lumios. We see a lot of evidence for that with all of the new lore to dig through under the site’s Game World section. I was always a big fan of Bless Online’s lore, but was disappointed with their lack of investment in the world; so, I’m excited to see a new story fleshed out in the same world.

Right off the bat, combat is insanely fun. There aren’t dozens of hotbars to organize or a ton of needless UI elements to clog up your screen. Instead, you execute your abilities by using your left and right mouse buttons respectively as well as a handful of numbered skills. If you use an MMO mouse, you’ll feel right at home with this, since all you have to do to turn your camera is move your mouse (without depressing any buttons) and the few keys you need for your skills are right by your thumb. 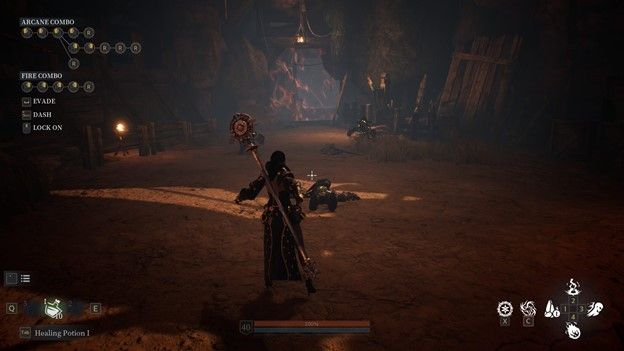 Combat is extremely involved, with a variety of sprints, dodges, and evades in your toolkit. If you use a shield, you’ll get the most out of the melee experience when you hold up your shield and deal damage at the same time. It’s such a simple concept, but one that we don’t get to see much in MMORPGs today. Every time you’re smacked in the face, your character feels the impact of that attack from behind their shield from being pushed back a step or two, to seeing the shield vibrate and ring out with a metallic clang. It’s just incredibly satisfying because you feel like each strike has some hard-hitting weight behind it.

Physical damage doesn’t get all the fun. Casters have some truly beautiful spell animations that light up the area around them and inflict conditions. Mages can use a variety of elements, not just one or two, and scribe magic runes in the air to perform some of their spells. Since their skillset is fueled by magic, they also get a nifty arcane blink as one of their evade skills that lets them kite and position easier around more difficult mobs.

Gone are the days of battling other players just to tag a mob. I’m so glad that games have moved away from forcing players to compete for quest credit, but instead focus on rewarding them for helping one another. Scattered throughout the world are mini bosses that can be slain for named loot, that thankfully benefit from this same system. It works similarly to FFXIV’s hunts, but they’re on a much faster respawn time and typically can be soloed if you have good enough gear and time your dodges and skills well enough. 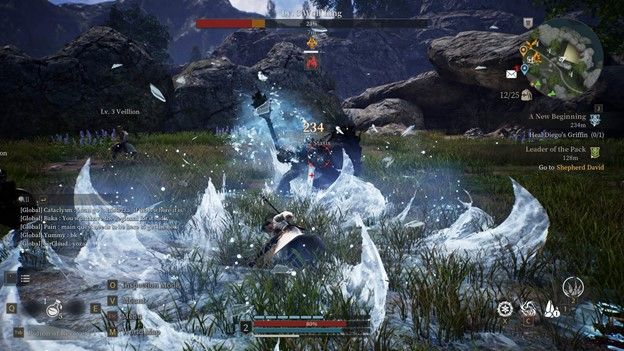 These fights are where you’ll probably notice the “player rez” function for the first time. When a player goes down, they have a limited amount of time before they essentially bleed out, but can be helped back up and into the fight if another player reaches them in time. While you can continue to farm mini bosses to help other players and receive gear, you do typically receive the same piece of gear as a reward. This isn’t a total loss, however, because you can break down extra gear for resources at a campfire to upgrade your current set.

Speaking of campfires, there are campfires spread all throughout the world that you can stop and rest at after a particularly difficult fight. Here, you can sit down to cook and rest your weary boots, as well as share a meal with multiple strangers that care to stop by. 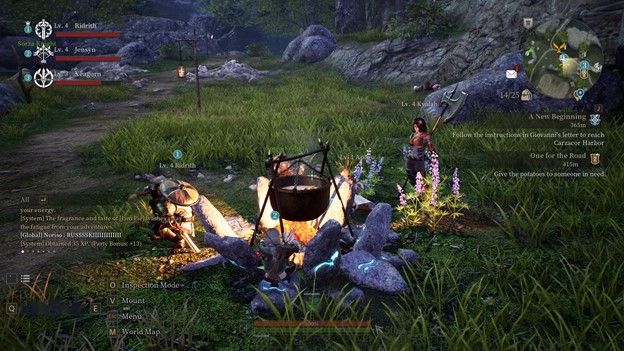 Typically, meals that are cooked and shared have a stacked quantity that depletes as they’re consumed, but they can be shared with anyone, party or not, if they take a rest by the fire. This is such an interesting and unique mechanic that I’m probably far more excited about than I should be, but I just love how Round 8 seems to be putting a fair bit of emphasis on encouraging player interaction and helping one another.

THE POTENTIAL FOR GRINDING

While I did get the impression that we might be faced with a little bit of a grind later for starseeds, the currency you’ll need to trade on the marketplace, I don’t think I’ll mind it as much. I can pretty much mindlessly grind through anything if I enjoy the combat enough, and I think it’s a sure sign that I enjoyed it when I realized that I had taken liberties to cull the wolf population five minutes later after completing my three-wolf quest.

We’ve been through this time and time again: nothing is free. I didn’t see any evidence of a shop during the closed beta, but I think it might just be hiding until a switch is flipped. So, how do they plan on supporting a FTP game? Most likely, they’ll fund it the same way other games do: mounts, costumes, dyes, etc. If you do a quick search for the Bless Unleashed’s console shop, we see further evidence of this system already in place, as well as their own reward system referred to as a Bless Pass. Think ArchePass, but not quite as devastating since there aren’t any mechanics in-game that can be abused from the rewards. At least, we hope not. 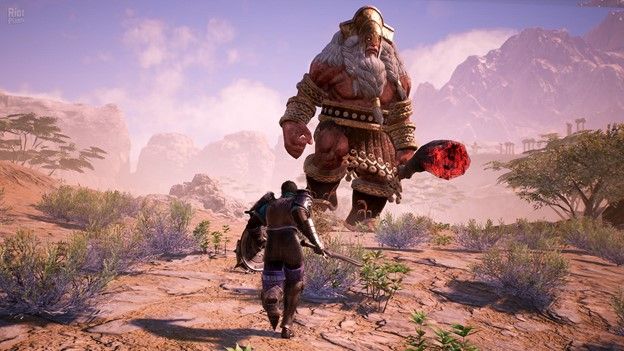 I know, I’m starting to get flashbacks to a few games, too. You can find all of the details for the currently existing Bless Pass here, if you’d like to do some comparisons. The site also details a few more interesting monetary systems in place such as Valor Perks, Prestige Status, Bless Packs, and of course, a sneak peek at the cash shop. Most purchases seem to be aimed towards convenience items like experience boosts, storage expansion tickets, teleportation cost decreases, as well as other bonuses.

I personally kind of like the idea of Valor Perks. You can purchase a specific period where you receive extra bonuses (Lumena, XP, gold, discounts) in either 7, 30, or 90 day periods, and it’s much cheaper than the typical $15/month subscription. This way, if you want to go hard for a week and farm till you fingers fall off, you can do so, then take it easy until you have some more time to play.

I wish we had more than just a few days to test Bless Unleashed in its closed beta, but I’m cautiously hopeful for what’s to come. I didn’t think I would enjoy it as much as I did, especially the combat, but for a free-to-play game, it’s pretty dang fun. Only time will tell if it holds up, or if they churn out content fast enough to keep players entertained. Until then, I think I’ll enjoy roaming around the world and enjoying the sights. It doesn’t cost anything to play, and with the current state of the world as well as the MMO drought, I’m up for any and all distractions.