Last week Mythical brought in a number of gaming journalists for a hands-off look at their progress on a new MMO in development, Blankos Block Party. With Chief Creative Officer Jamie Jackson running through a number of features, the hour-long session was set to take us through a brief overview of different experiences players will be able to have in Blankos Block Party. The premise of Blankos Block Party isn’t tough to understand, but that doesn’t mean that Blankos Block Party (BBP) doesn’t have a ton of fun and complexity in store. The easiest way to define BBP would be, a game that utilizes the vast creative abilities of a game like Roblox, with the gorgeous, stylistic designs of popular vinyl toys.

Blankos Block Party surprised me. In many ways, you see a lot of similarities to BBP to other games out there, but what Mythical has created is a mixture of many different aspects of several different genres, into one experience that gives the player way more control than they might expect. One feature that certainly sets BBP apart from many other games, is their block-chain based proof of ownership technology. What exactly does that mean for players? Essentially, anything you earn or create in game can be sold. This could have quite a substantial impact to the economy and content creation in BBP. 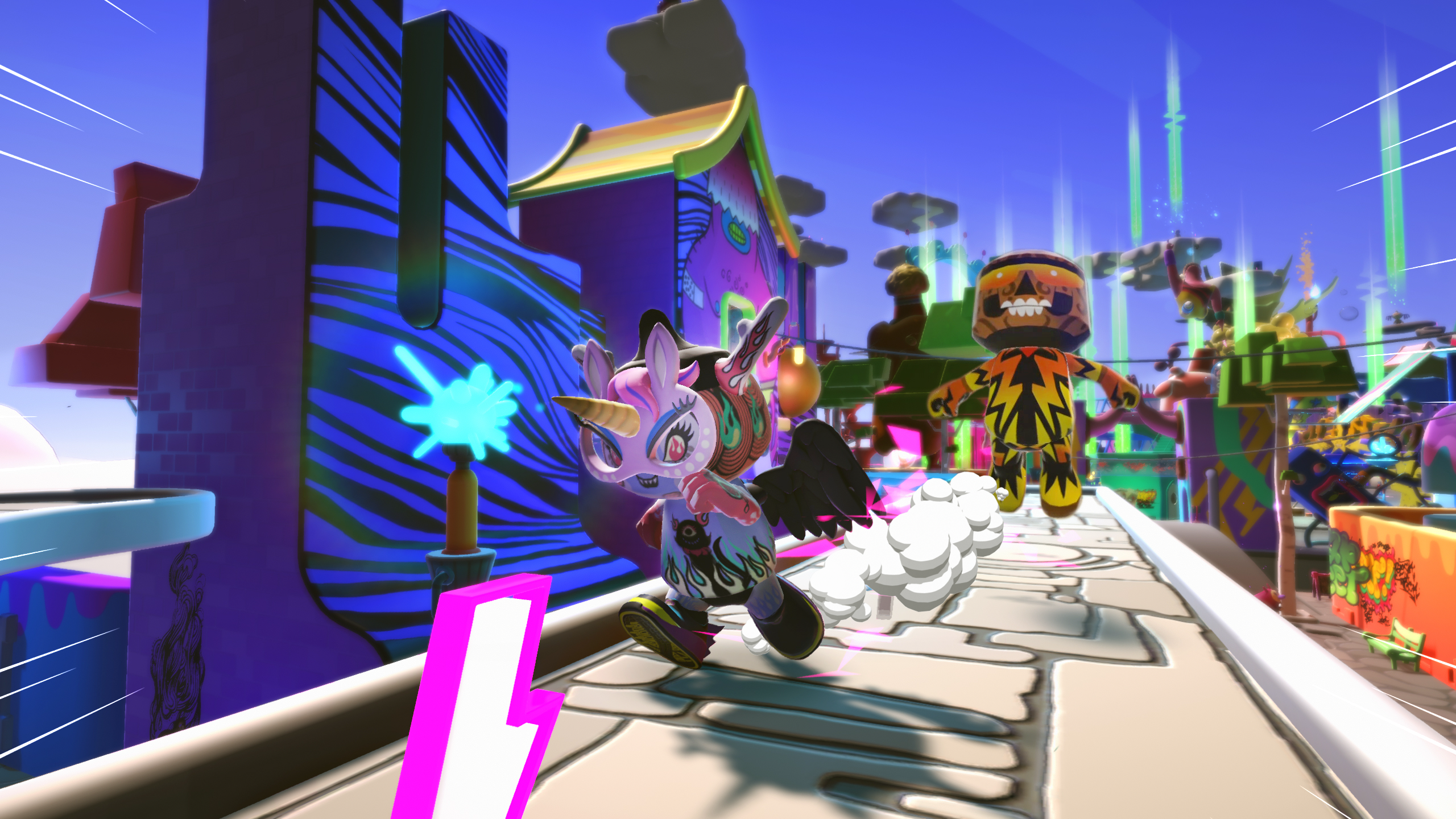 In addition to simply providing the tools for full ownership on things that you create and buy, BBP has a lot of things for you to collect. As each toy you have can be collected and customized, there is a lot out there for players that really enjoy the premise of earning collectibles and earning or purchasing rare mementos throughout your gaming experience. Lastly, BBP not only has an open world that players can roam around and complete tasks alone or together in, but they also have the ability to create vast worlds and game-play modes. With game modes like racing, tag, collection, and even a shooter, there are a bunch of party games that can only get crazier once players start designing their own levels and challenges.

So How Does It Play?

Jamie started by taking us through the open world area, where he completed several “Gigs” which were essentially quests. Gigs vary in what you have to do to complete them, and most of them appeared to be basic quest stuff. The movement around the levels seemed appealing for anyone familiar with platformers. You were able to double jump, wall jump, and eventually after he earned some wings, he could take to the air and glide across large swaths of the level, making completion of certain tasks much easier. 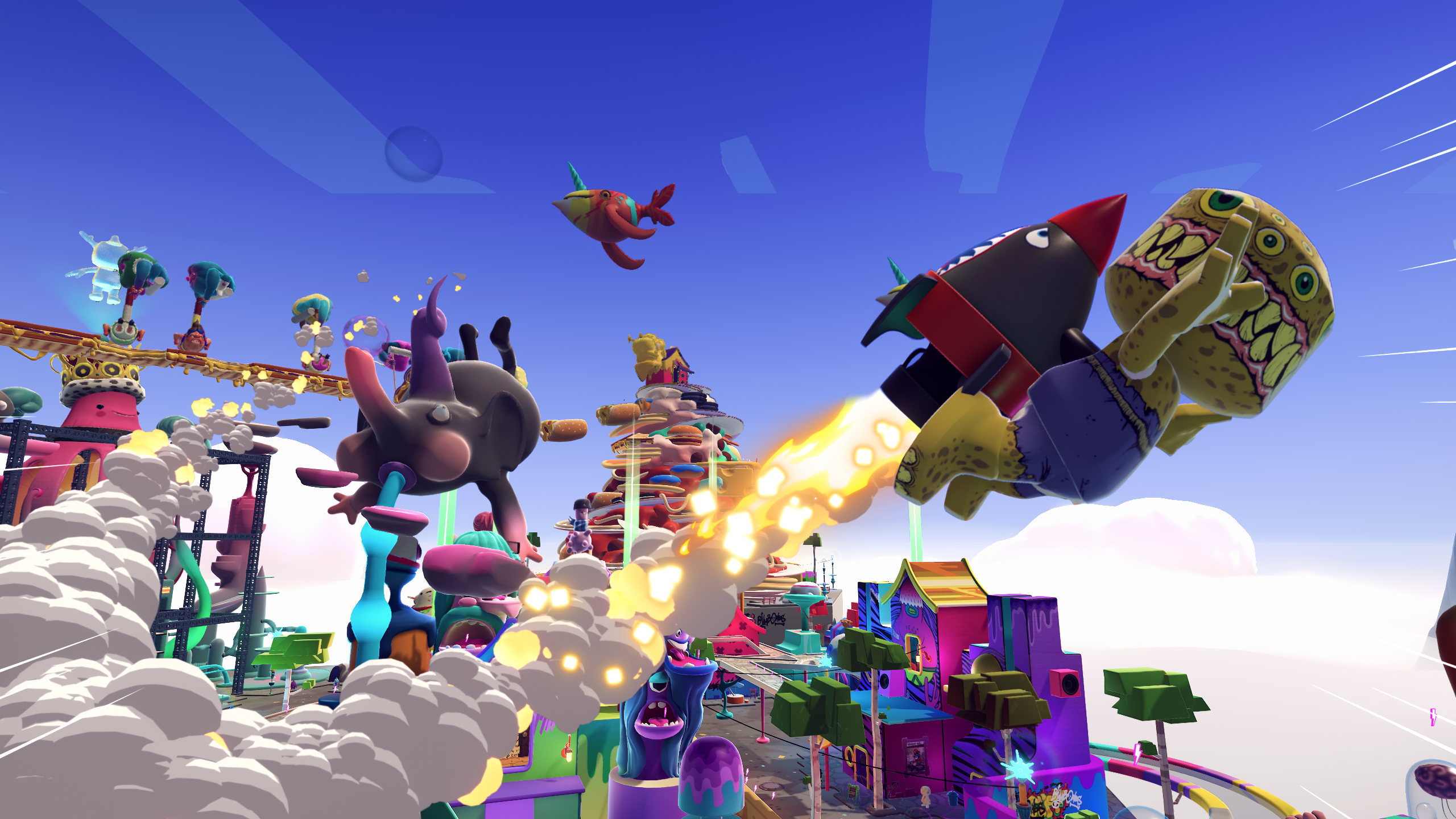 In a couple of the missions Jamie took on, he was given the ability to fire away, in a third and  first person style, to shoot down some ducks at a shooting range, and later, he obtained what would be considered a “kill quest” where he had to destroy some A-frame signs placed around the level. It was pretty cool to see the character gliding around with his wings, firing away, and the implications of that will no doubt be built upon as the difficulty of the tasks increase.

In many ways, the movement had kind of a Lego-like feel to it. Blankos are toys, so they move like what you would expect a toy would move like. Later in the demo, there were large levels that required some somewhat precise platforming. Altogether the toughest part of watching it all was not being able to join in. The mini-games and short challenges looked like a lot of fun, even if you couldn’t necessarily call much of it “challenging”.

As players buy or earn more toys, they are all placed in an area of the menu called your Shelf. On the Shelf you will be able to see all of the toys you’ve obtained, and customize them, and that includes leveling them up. According to Jamie there are a lot of different types of skills, such as dash boosts, air dashes and more, but we weren’t able to see exactly how in-depth the skill system was. We were able to see some of the cool designs that Blankos Block Party will employ.

One of the biggest points that seems to have been pushed is that BBP employs quite a few big-name toy designers, such as James Groman (G.I. Joe, Go Bots / Transformers and much more) and Tara McPherson (Poster art for Metallica, Beck). The designs that were shown during the demo were certainly cool, and I could only guess that those designs will be heavily built upon as the game progresses in development and new artists are brought in. There is certainly a big market for IP crossovers right now too, which leaves the door wide open for exclusive and rare Blankos in the future. 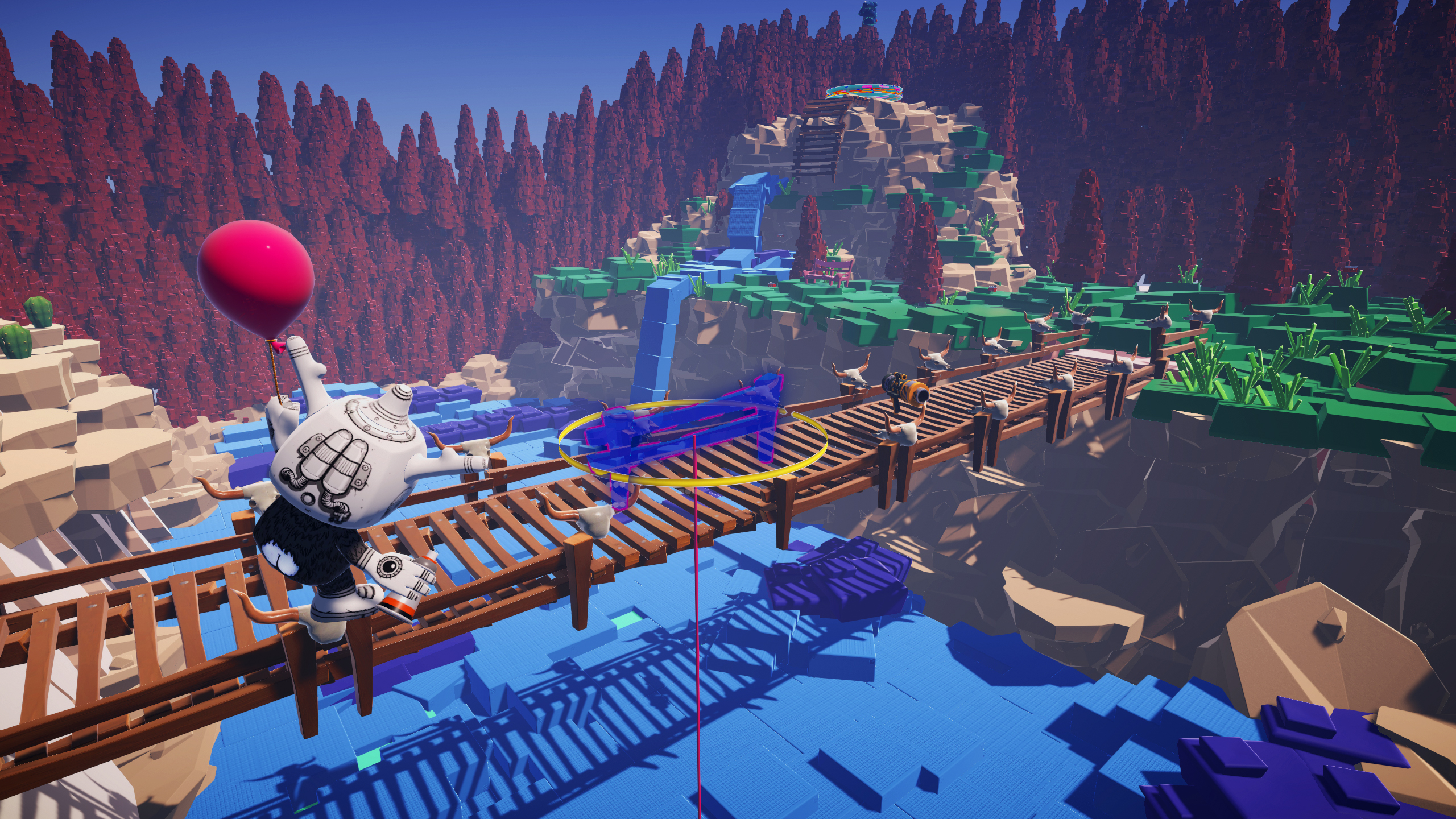 The last thing we were shown was the build mode. Build mode was precisely what one would expect a build mode to be, you essentially build a level, and set a challenge type for other players to join. From the jump Jamie says that the number of assets free players will have to build with will be quite large, and there did appear to be a lot of different options available for him to create a large, diverse level. Everything from the lighting, to the size of every object, to the available weapons or items on a level could be customized. The building portion was impressive, but it was certainly something we have seen before, and perhaps not quite as robust as we’ve seen from other titles, but the premise of BBP as a content generating machine was all there.

Blankos Block Party is not your traditional MMO. There are a lot of pieces that open up nearly an unlimited array of games to play within the Blankos world. However, Blankos Block Party is a party game through and through. There doesn’t appear to be any overarching theme or heroic never ending quest to follow. Stylistically, while the toys are very cool, it does come off as more of a game for all ages, which may not appeal to players looking for a more adult game to occupy their time.

I was certainly surprised with what I saw, primarily due to the ease of getting into a game, having a few laughs through some of the mini-games, and moving on to something else without the impending dread that I may not have accomplished something of note during my play time. While I can’t say that BBP will be for everyone, I can say that what I’ve seen so far will certainly appeal to a certain crowd. A crowd looking for a block party.