This past week, I’ve been able to experience Aion Classic as a ‘free trial’ player after the initial free week’s-worth of Siel’s Aura expired. I was able to see past my rose-tinted glasses of nostalgia from that first week and really see how Aion Classic’s decision to bring back the original subscription mode will affect players that don’t want to, or can’t, pay.

I’m not going to sugar-coat it. It’s been a rough journey playing Aion Classic as a free trial player. I understood that the 50% experience loss would noticeably increase my grind, but I didn’t really understand how almost every aspect of gameplay changed significantly for me. I had to practically schedule out my first hour of gameplay each day so as not to feel like I was wasting time. Rather than running around, going to new areas, or attempting lengthy quests, the smart choice seemed to be just staying in one spot and continually hunting down specific mobs that I was comfortable grinding.

For the most part, I prioritized fighting mobs and maximizing my experience earned for that first hour. Repeatable missions, like the daily coin quests, gave me a good goal or task to work on so that I didn’t get too bored with the grind. I found myself waiting till after that first hour grind to start missions that required gathered materials to turn in, though in the end it was easier (though costlier) to just buy what I needed off the Broker. I even waited until after that first hour to turn in those quests, as well as any other miscellaneous quests that take a long time to complete - such as one that required me to visit three completely different zones to gather specific monster drops. 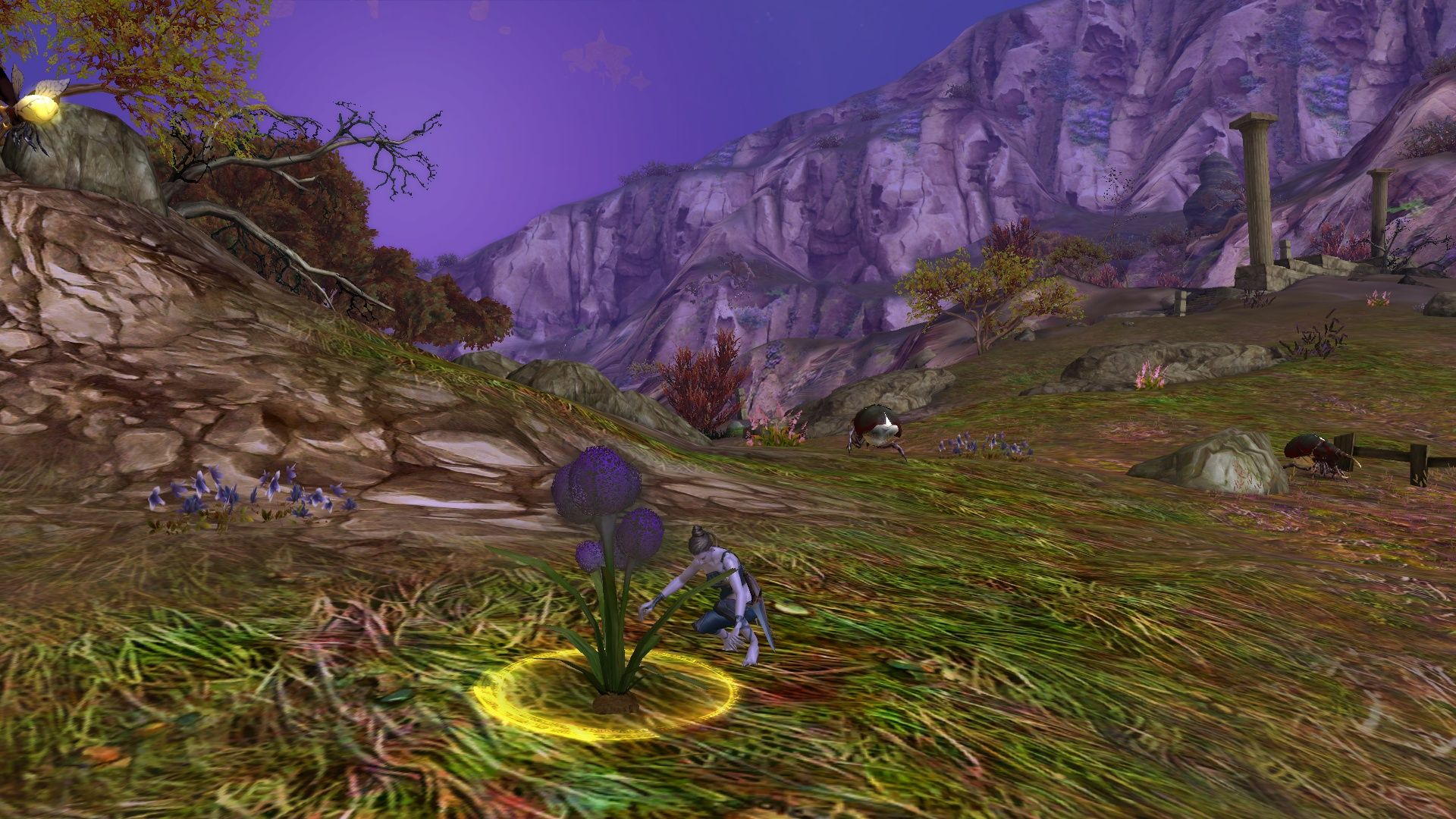 I forgot that one of the limitations without Siel’s Aura was that you can’t gather materials or ingredients in the world after that first hour. I wanted to prioritize leveling up my actual character’s level rather than on crafting professions. I could have also spent that hour on gathering to increase my Essencetapping or Aethertapping skills and then dabble in crafting afterwards if that were my preference. You still can technically do whatever you want, but you’re limited by that hour-long time constraint to get your own materials as opposed to spending in-game kinah.

As a result, Aion Classic feels like an MMO that punishes players for not ponying up the money for the subscription fee. I felt forced to choose what my focus would be that day, planning out my time in the world instead of simply being able to organically experience it as I would any other game. I’m not here to bash the subscription on the whole, but I think that it limits the ‘free trial’ players to such an extreme as to either dissuade a lot of them from continuing to play, or else be corralled into a specific gameplay experience - i.e. grinding. 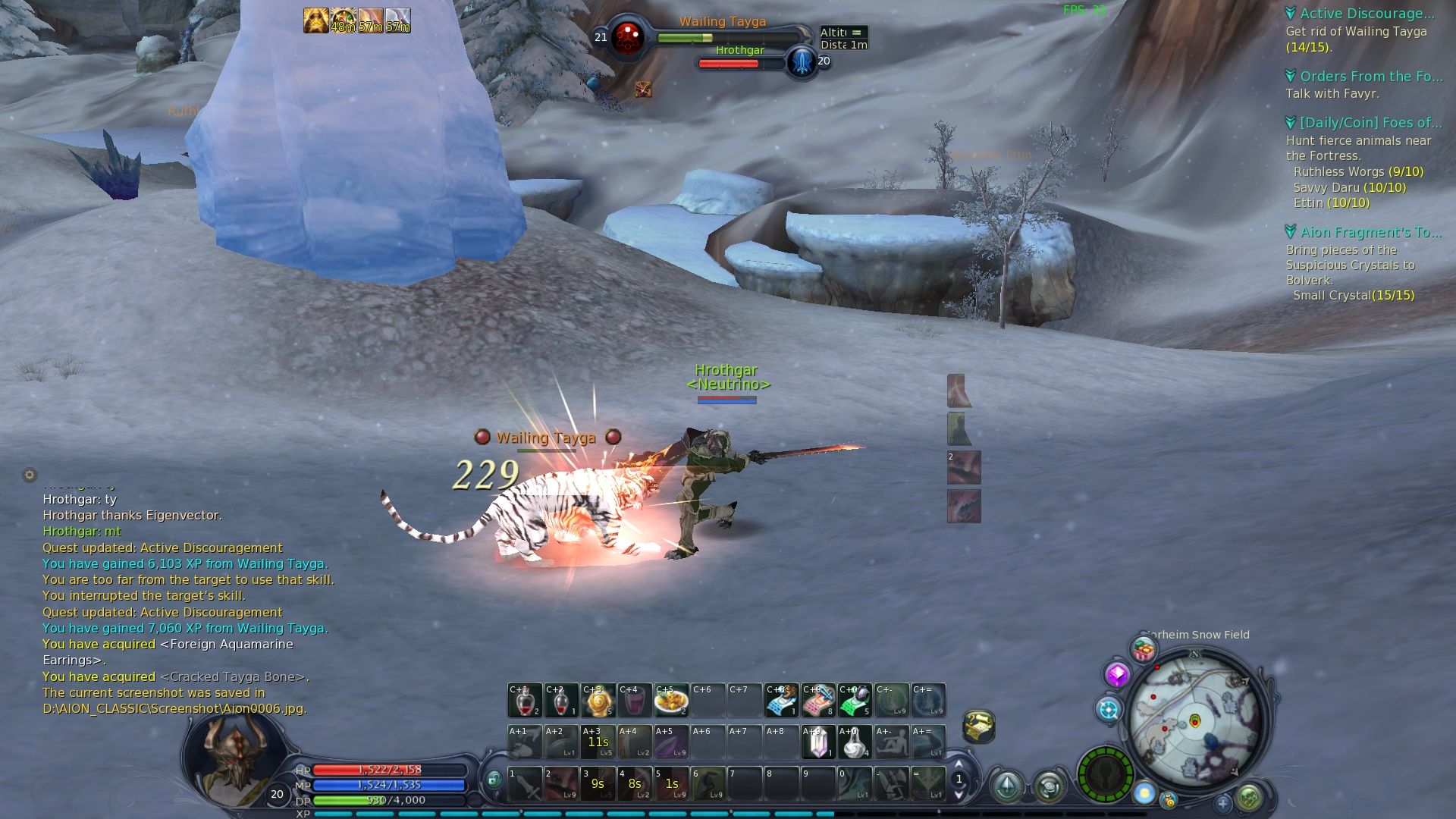 To be honest, the grind did start to wear down on me after only a few days. I felt less and less motivated to log in to Aion Classic every day because it didn’t feel rewarding to only have an hour’s worth of real gameplay per day. I know that Aion is a grindy game - there is no glossing over its design - but a lot of the tedium could be addressed by providing the free players with alternative avenues for spending their time, such as gathering and crafting. During my talk with NCSoft West’s Lead Producer on Aion Classic, Mike Shreffler, he noted that this restriction - alongside the inability for free trial players to open player shops - are to “prevent bots from gaining items and distributing them through the game world.”

While I think that such a restrictive subscription is a novel way to try and combat botting, it would appear that in-game the bots have decided an alternative course of action - just selling candies for kinah, and then selling the kinah. I’d be very curious to see what the artificial injection of the in-game currency kinah via the MXT store’s candies has had on the economy, and its long-lasting (if any) effects, versus the potentiality for bots to flood the market with crafting materials or items. I feel like even if the market was flooded with materials, it would only be a boon for crafters. Likewise, if bots were to start crafting as well then it would naturally and organically stimulate kinah into the economy.

There is a restrictive element to the subscription that I do find useful to combat bots distributing items, and that is the limitation on ‘free trial’ players to only acquire superior (green) and below items in the field. This means that heroic (blue) items and above would only be lootable during that first hour. This stipulation does not pertain to quest rewards or buying from vendors, such as the coin vendors, with regards to rarity. Meaning, players could still earn better gear through quests or even purchasing them through the Broker - which you know will be from other player characters, not bots. This way, bots can’t farm world bosses or rare spawns and trivialize these hard-to-find pieces of gear.

When I finally did hit level 25, it opened the way to The Abyss where I could start to explore the multi-leveled zone of Reshanta. This area features the dragon-like Balaur race, which are the shared enemies of both the Asmodian and Elyos factions in Aion. All of The Abyss is contested grounds between these three factions, and features often-times unpredictable PvPvE clashes. It’s also a completely free flying zone, where players are literally able to stretch their wings and experience midair fights. Fighting in The Abyss also earns you Abyss Points, which are accumulated in order to increase your Abyss Rank and purchase powerful Abyss weapons and armor. 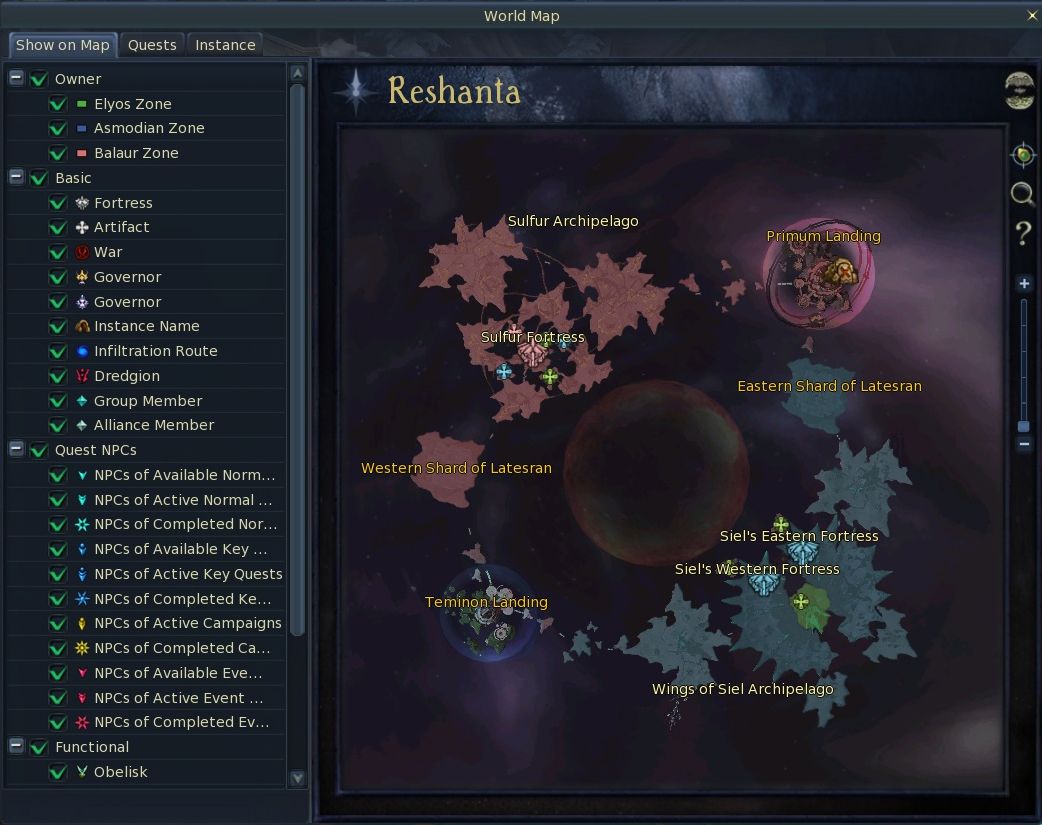 Unfortunately, free trial players don’t earn any Abyss points when hunting down Balaur or defeating enemy players in The Abyss. This is probably the biggest constraint on free players. The Abyss is some of the most fun content in Aion and it's a shame that players are limited in how much they can enjoy. Unlike grinding for experience otherwise, which you can do regardless of subscription status, the whole point of fighting in The Abyss is to earn those points and rank up. Without that, it’s just not worth the risk to get caught by a group of enemy players and lose some of your points in death.

Sadly, the new player presence has diminished greatly as well. Which isn’t to say it’s nonexistent, it’s just noticeably less than what the first week was with the courtesy Siel’s Aura available for everyone. Which, in part, has been beneficial to me since I don’t have to compete for hunting grounds or quest objectives. Just to note, after performing a player search at around 6:00pm PST on a weekday, there were about 1,600 total players online. Of that, about 100 were between levels 1-10 (which I deem to be the tutorial stage), 200 were between levels 11-20, and 350 were between levels 21-30. The average level is in the mid-30s, where the meat of Aion’s content starts to shine in The Abyss and the PvP Siege events.

These might seem like really low numbers - and they probably are compared to some other MMOs - but it never felt empty or barren in Aion Classic. I would still see plenty of other players running around, or shouting for groups in the LFG channel, and there are still way more Elyos hunting in The Abyss than I would like.There are also plenty of bots to keep you company as well, since their persistent spamming in chat has continued unabated. Hopefully soon NCSoft West will actually uphold their stance against bots and gold sellers and find a way to quickly deal with the chat spam.

I still enjoyed playing Aion Classic as a free trial player, though not nearly to the extent that I was originally. The subscription feels like a requirement to enjoy the Classic experience - which, I suppose technically, is the classic experience. Let me make it clear that I don’t mind paying for the subscription at all. I think that for a game that I used to love playing over a decade ago, I would gladly pay the subscription in order to rekindle those old flames in my heart. Regrettably, I think that Aion Classic is doing itself a disservice in how much it is restricting the free trial players. I feel that some of these restraints should either be loosened, or you just shouldn’t even offer the free trial at all.