PAX East was a heck of a weekend, and I got to meet and talk to so many people from so many different MMO communities. I was very fortunate to interview one of my favorite FFXIV players, Rin Karigani! We go super in-depth on the newest Ultimate raid in FFXIV, as well as high-level raiding in general!

Anthony Lowry, MMORPG.com: This is Anthony Lowry, here with the one, the only, Rin Karigani. How is PAX treating you today?Rin Karigani: It’s been a busy week. It’s my first convention back since Covid hit, and it’s been a blast nonstop running around meeting people, hanging out, a lot of networking, playing video games, a lot of steps.

A: We’re gonna talk about Dragonsong War, because this is something that we’ve been waiting a long time for. We thought we were going to get it in Shadowbringers. Turns out it was delayed a little bit. Now, with it imminent, What are you and your team’s plans going into this new Ultimate raid?

R: Alright, so we are waiting a long time, a couple of years in the making. Expectations are high. They’ve told us it’s going to be difficult. We’ve done a lot of training, running a lot of fights, consistency runs, familiarizing ourselves with mechanics, making sure we all know the names. They said it’s going to be a little bit easier for statics, a little bit harder for casual players, so I presume we’ll have it complete by Friday is my hope. If it takes longer than a week for world first then it’s a really good fight. Not that everybody has the time off to take, but we’ll be going on about 16 hours a day, sleep for 8 hours, go again, break throughout the day as we need. Usually try to take breaks, so if you need to use the bathroom while we’re making diagrams, etc. Eat food and review footage at the same time. We have our comp picked out. Our melees are able to play all the melee, which is great. We’re actually going with a double caster comp. We’re going to be running Summoner/Red Mage.

A: Is this the first time you’re run double caster in your groups? Typically it’s double melee, right? I remember watching your [Pandaemonium Savage] prog and you were double melee then.

R: Well, it’s a new team. It’s on a completely new team this time around. But we did have the option to run double melee. However, when you’re pugging something for the first time, it’s easier to get uptime as a ranged player than it is a melee.

A: That’s very trueR: Strategies can be a little bit looser, without sacrificing damage, in addition to the [resurrection] potential. And that’s not to say that you could corpse carry through something. We’re gonna have to be clean when we kill it. But there might be mechanics, or our healers go down. We’re gonna be running Dark Knight, and probably Warrior. A lot of heal potential and a lot of shield potential. New Living Dead is great, and Dark Knight puts out a lot of damage. We’ll be pulling Machinist, for our ranged, simply because our ranged player doesn’t care for Bard, and he’s more proficient on Machinist, which also helps if you have a short enrage timer on an enemy. Machinist can burst heavier, and Bard relies on DoTs, so their damage is going to be a little lower. And we’re actually making the choice to go White Mage and Sage, so a lot of burst heal potential.

A: Yeah, that’s a lot of changes with this new group! Watching your [Pandaemonium] prog, I believe your healers were Scholar and [Astrologian]

R: Yeah, it was. And it ended up being pivotal for P3S.

R: You would think so, but it does the most damage!A: That’s very true! 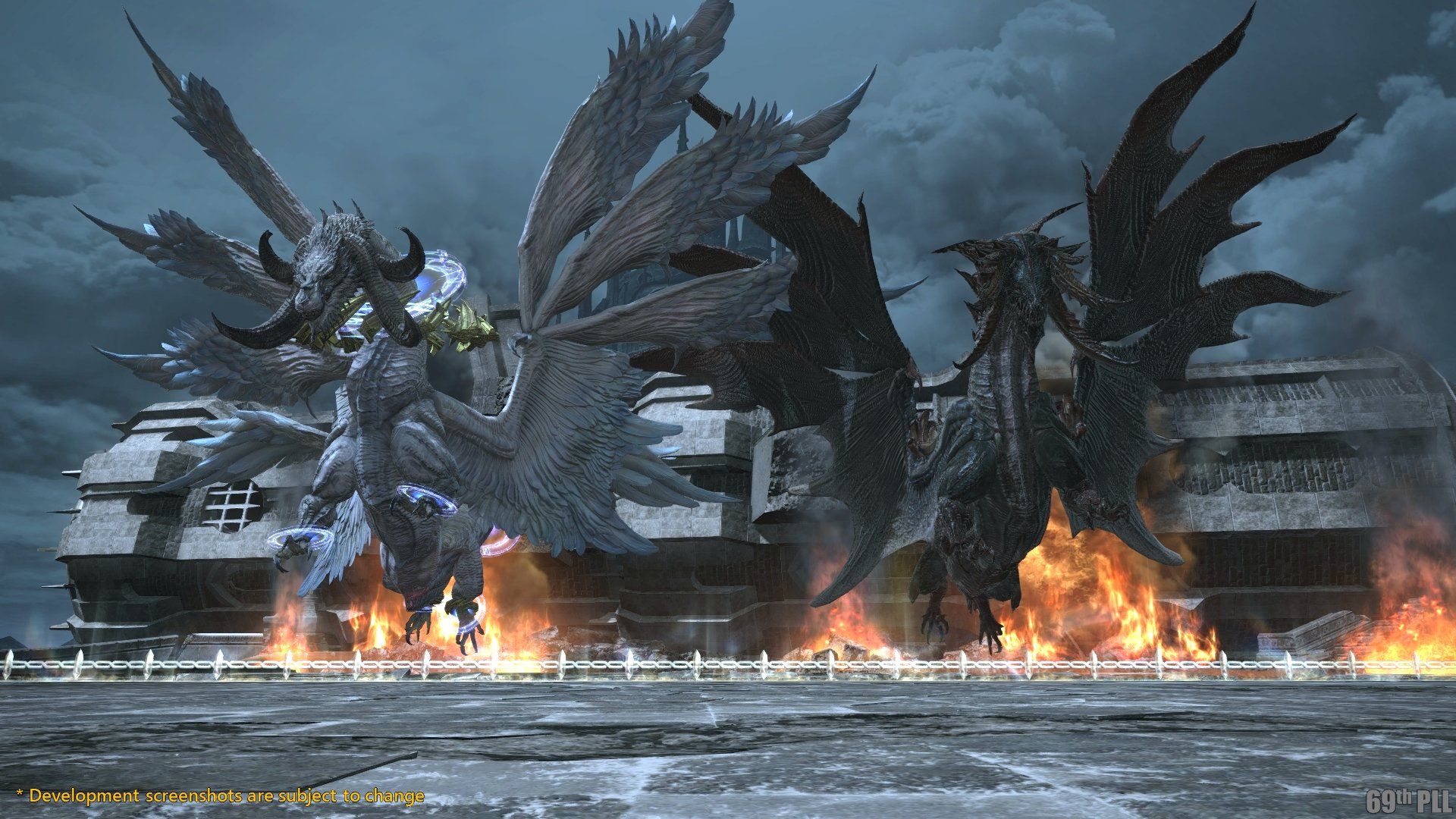 R: Like you said, I play all four tanks pretty well. So when it comes down to it. I’ll just bring what does the most damage, and normally, I would go Gunbreaker. But my co-tank does not play Dark Knight. He’ll play either Gunbreaker or Warrior. However, Living Dead opens up a lot of potential for prog, because if our healers go down or whatever else, we can also strategically allow Living Dead to proc. For example, if I’m already low, and I could survive a tank buster or an auto attack, but we choose to let my Living Dead proc, I can then heal myself up to full HP. So they can res somebody else while I just power heal myself. Blood Weapon change is really good. Now we can AOE and still get our full potential. [The Blackest Night] is exceptional, and the fact that Oblation has two charges on it, in addition to TBN~. A lot of people look at Oblation and think it’s a weakness. I look at it as a strength. Because Dark Knight can cover three different targets, at the same time.

A: You went into that talking about the tools that Dark Knight can bring, and that’s an optimization in itself of sorts, especially during prog. You understand that these tools can be good here, even if you’re not fully understanding with the fight is throwing at you. With high level progression, you want to see as much as possible with each pull. Optimization isn’t just about maximizing damage, but whatever you need at that point in time. How do you go about figuring those optimizations out, from both a personal and a team standpoint?R: I would say that when it comes to my team, doing damage is easy. That’s the bare minimum. You should know your rotation. Survivability and progression become the next best thing. Having people that quickly identify what’s going on, how to handle it. Then all eight players need to be consistent, and be able to execute a plan. So having tools available, and knowing how to spread them out. For example, I can use my two minute cooldown here, then you use your 90 [second cooldown], and then the next time something comes up, my two minute’s back. Or, if not, now you’re reversing. You use the 90 first, then the two minute, and then the 90 is back up. Being able to rearrange cooldowns, that is important. A lot of it sounds very technical and it requires a lot of thinking, but we practiced a lot, so we’re working all together. So we kind of already have those contingencies in place. We come up with mock situations where we’ll already have our spread positions or how we’re going to move together as groups, as roles, on where the arena cuts us off. Just a lot of planning, so when we finally come into it, we don’t have to sit down going “how do we resolve this”? We go “Okay, scenario ‘D’. Now let’s pull up scenario D and execute that, or, now we have situation five, now let’s pull that one. It’s just a lot of already being ready for situations and hopefully not hitting a wall.

A: To close it out, we’re having a lot of technical talk and a lot of talking about progression, and there are a lot of new players, and you’ve raided with players all over. I’ve raided with you a couple of times, and you’ve helped me feel like I can actually do this. Both you and LlamaTodd have opened the door for Savage raiding for me. What would your message be to players who were like me, who would be scared to go in or don’t have that environment?

R: I think that players of any level, you might be really nervous to get into savage and if you don’t want to do it, that’s okay. Nobody should feel pressure. However, if you do want to do it, there’s always going to be someone out there and a group you could play with. It might take a while because it’s easier said than done. Like you said, LlamaToss and I were helping people all the time, and there’s many more people out there who are not steaming who are willing to help. You got a lot of people who are willing to put their foot forward, take a chance, and while it can be very stressful and nerve wracking. Playing tank, playing healer [is] a lot harder than DPS, because if you mess up, everybody immediately sees it. I would say just do it. You’re gonna make mistakes. People are gonna get upset, other people aren’t. You’re gonna make friends. There’s a lot of players in Final Fantasy XIV. So do your best, I believe in you, and if I can do it, I know you can too!