World of Warcraft's team finally put out a statement in the wake of the Activision Blizzard lawsuit which broke news last week. The statement, which doesn't directly reference the lawsuit or any specific actions alleged by the California agency which filed the complaint, the statement does acknowledge the hurt caused at the studio.

The statement does address the women  and other marginalized groups who have come forward in the wake of the lawsuit being filed by the California Department of Fair Employment and Housing, stating that leadership stands "committed to taking the actions necessary" to ensure that World of Warcraft, both in Azeroth and, more importantly, at Blizzard, provides a "inclusive, welcoming, and safe environment."

"The past days have been a time of reflection for the World of Warcraft team, spent in conversation and contemplation, full of sadness, pain, and anger, but also hope and resolve. As we heed the brave women who have come forward to share their experiences, we stand committed to taking the actions necessary to ensure we are providing an inclusive, welcoming, and safe environment both for our team and for our players in Azeroth. Those of us in leadership understand that it is not our place to judge when we have achieved our goals, but rather for our team and our community to let us know when we still have more to do."

While not directly addressing the lawsuit, or even admitting guilt for the allegations levied at Activision Blizzard by the DFEH, World of Warcraft's team states that they are going to take immediate action in order to  remove "references that are not appropriate for our world." This could mean references to developers named in the lawsuit, such as references to former senior creative director Alex Afrasiabi, who has an NPC and Quest named after him.

A message from the #Warcraft team. pic.twitter.com/3gWCz1gu8T

The World of Warcraft team ends the statement saying that they understand they have to rebuild the trust through their actions more than their words. 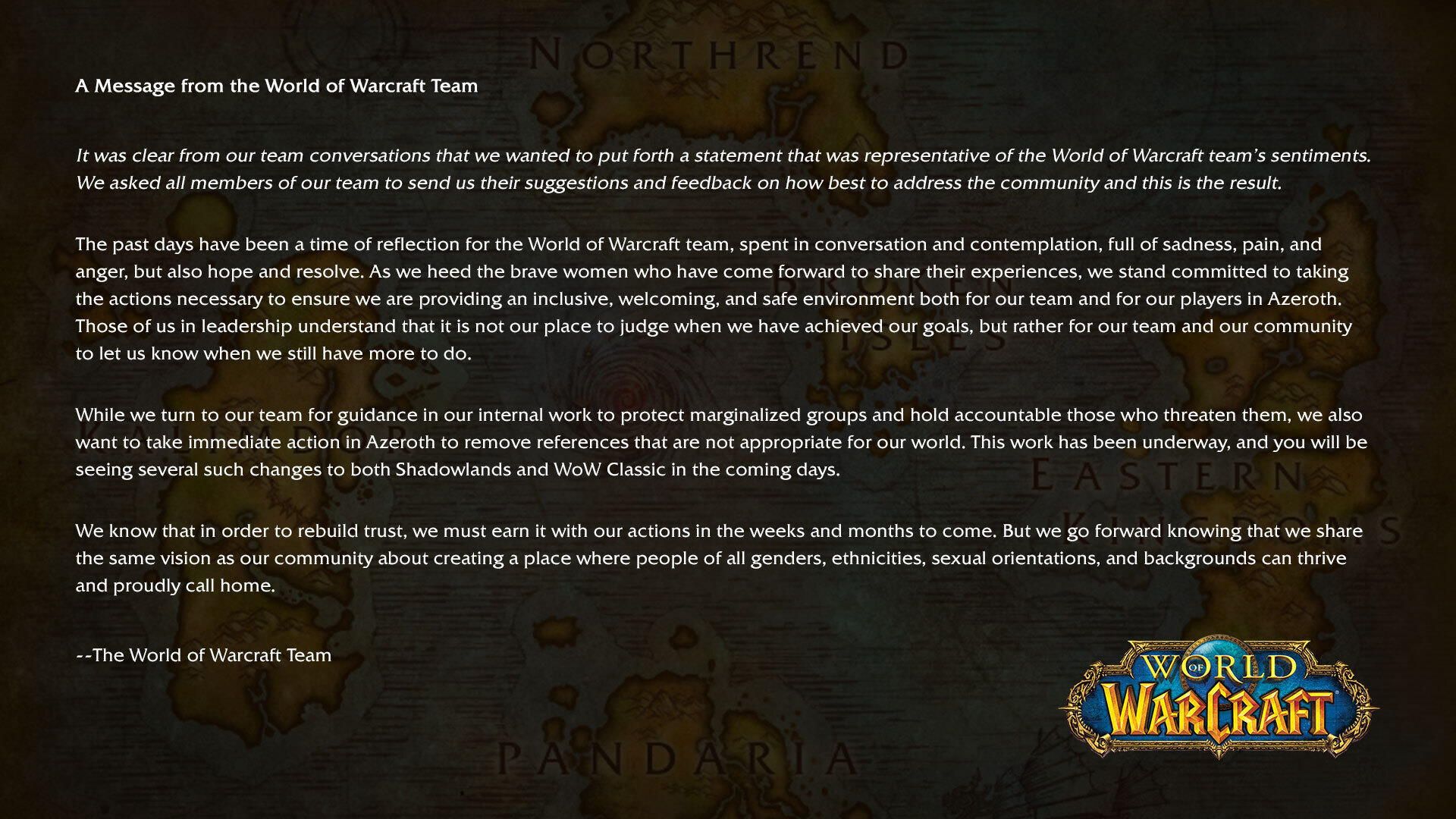 Earlier today it was announced that Activision Blizzard employees will be staging a walkout in protest, pushing back against leadership's response to the lawsuit as well as demanding a change in the workplace culture at the game publisher. The lawsuit, which was filed last week, alleges that Activision Blizzard allowed a "frat boy culture" to flourish at the game studio, which saw a myriad of female employees, especially people of color, discriminated and harassed. The lawsuit was filed by a California agency following a two-year investigation into the company. Activision Blizzard, for their part, released a fiery statement, calling the filing "inaccurate," while Activision Blizzard executive Fran Townsend in an internal memo called it "distorted and untrue."