Wild Terra 2: New Lands will release on November 10th, leaving early access with no server wipe. There's also a free weekend coming up this weekend and an updated roadmap laying out plans for 2022 into 2023.

All current Early Access servers will be given Legacy status and not wiped when the game officially launches. This means there will be new servers opened on November 10th for the launch, but if you already have characters on servers that you've been playing through Early Access, you'll still be able to keep them.

However, if you play on a Legacy server, you won’t be able tot transfer them to any of the new servers, though new players can roll on Legacy servers if they choose to. Maybe you talk to your friends about the game but they didn't get in on Early Access. They can join you on the same existing servers if they want to. Legacy auctions will also be separate from the new servers. 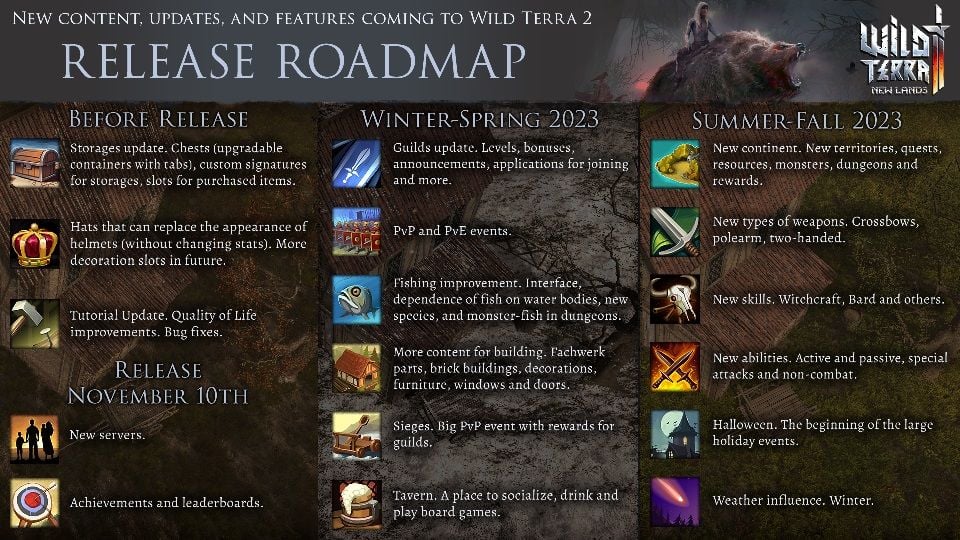 Expect some changes before launch, including a tutorial update, some quality-of-life improvements and fixes, as well as a storage update, and that can replace your helmet without affecting stats.

Beginning this Friday, September 30th through October 2nd you can play for free via Steam, where the developer Juvty Worlds Ltd. is offering a 30% off discount.

In a roadmap update, the team looks ahead into 2023.This winter into next spring, expect additions like PVP and PVE events, a major guilds update, the addition of sieges, more building content, and more. Other additions will be a tTavern for players to socialize and play games in that space and also improvements to fishing. This includes monster fish in the dungeons.

Head over to Wild Terra 2: New Lands for more info.