Tower of Fantasy’s 2.2 update, Mirafleur Moonshade, is now live, with a much-expanded cyberpunk city of Mirroria, packed with new activities and content, two new simulacra, and a series of rewarding events.

In a recent preview, we found out just how big this update is, in that it adds two sections to the city, where the first section added in the 2.00 update was just section A, this opens up sections B and C, with more than 150 exploration points, and a whole series of minigames. New places you can visit include the Star Apartments, Mirramoon Street, the entertainment center, the Aquaria Palace, the Oasis Club, and much more, with a number of these places offering new interior scenes and content inside. Go bowling, racing, visit the nightclub, and discover other activities and interactions. Enjoy the arcade, fishing, mahjong, pet feeding, and something called Fight the Landlord. There's a lot to be discovered.

Prepare for the new instance, The Void Abyss, which should help you get geared up after you level up to 80, when it unlocks on January 1st. The Critical Abyss, an 8v8 PVP mode, will also unlock and be open every day from noon server time to midnight server time. 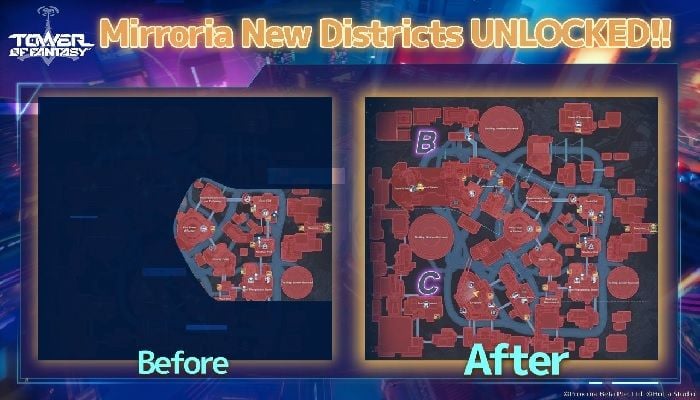 The update introduces a new storyline for the research mission, and adds two new simulacra, Tian Liang and Lyra. Tian Lang is a plant researcher and mostly sticks to studies unless Mirroria is in trouble and then he’s like a secret weapon. Lyra is somewhat similarly low key but can be a real help for your team when needed.

The Winter Festival starts on December 24th and runs through January 11th. It consists of three limited time events, including Float Parade, Creature Clash, and Bullet Time. Float Parade will see a parade show up for 30 minutes at three separate times a day. During the parade, gift boxes will drop and you can pick them up for rewards and Festival coins. All these events give you coins, which you can trade for rewards.

Read the full notes over at Tower of Fantasy.