Indie MMO TitanReach, developed by Australian indie studio Square Root Studios, has paused devleopment on its game, citing a lack of funding as the reason. The studio states that despite opening up credit store last year, as well as the funding achieved through its community the last few months, its funds have "dried up."

The announcement was made this morning via the MMO's Discord channel. TitanReach states that after it opened its credit store back in December 2020, the team was able to scale up quickly, adding developers (14 on average; 12 of which were full time), though the studio claims it was only paying those devs "minimum wage" the last eight or so months in an effort to "stretch the funding as much as possible." 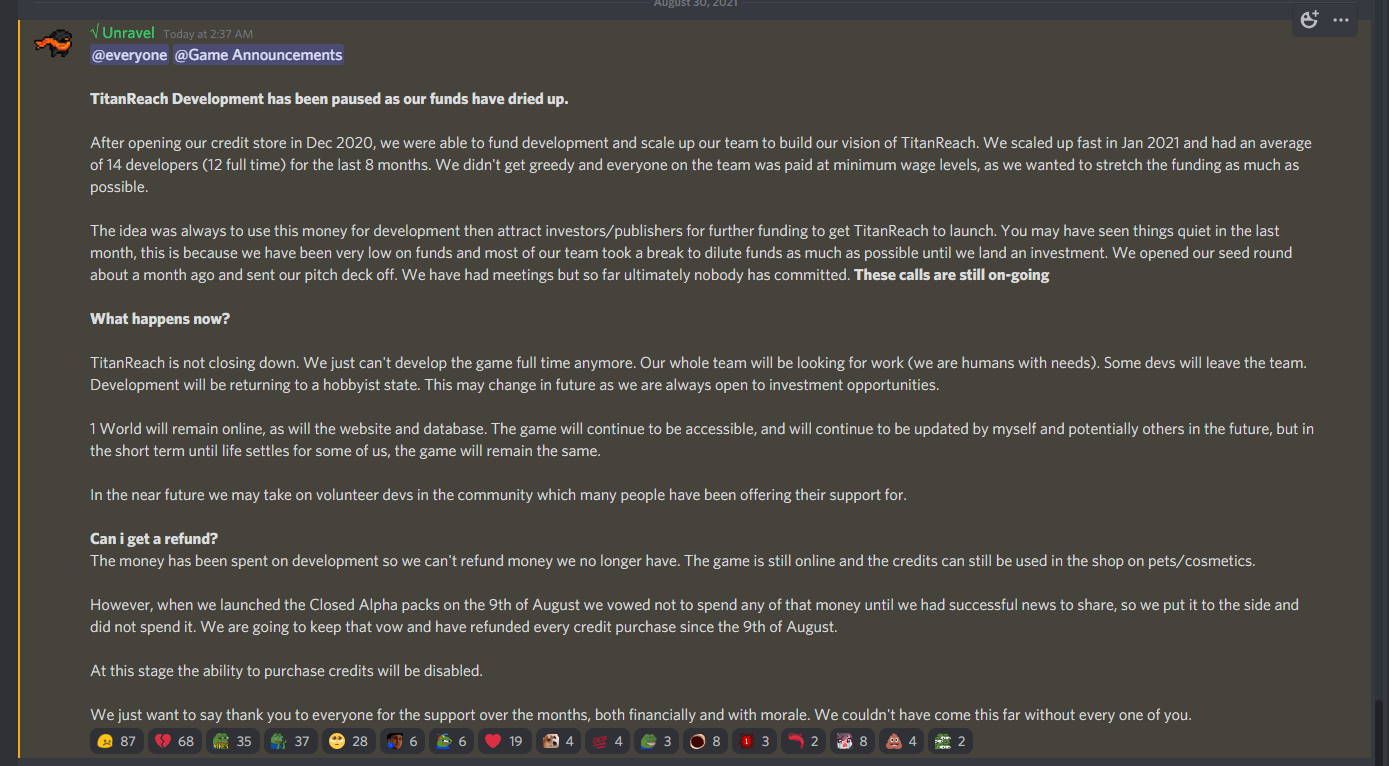 However, while the goal was to attract outside investment, the team has been unable to do so, though Square Root Studios states that these calls are still "on-going" with outside investors.

"The idea was always to use this money for development then attract investors/publishers for further funding to get TitanReach to launch. You may have seen things quiet in the last month, this is because we have been very low on funds and most of our team took a break to dilute funds as much as possible until we land an investment. We opened our seed round about a month ago and sent our pitch deck off. We have had meetings but so far ultimately nobody has committed. These calls are still on-going."

As such, the team has had to suspend developing TitanReach full time. However, Square Root Studios stops short of saying that TitanReach has ultimately been canceled. Instead, the team will be workying on development in a "hobbyist" state while developers look for other work. A single game world will remain online, as well as the website and the database for those players who want to continue checking out TitanReach whilst it tries to attract investors.

As a crowdfunded game, naturally the question of refunds will come up. Square Root Studios states, though, that it is unable to refund the money raised as it no longer has it, as well as citing the fact the MMO is still technically online as seemingly another reason to stave off refunds.

"The money has been spent on development so we can't refund money we no longer have. The game is still online and the credits can still be used in the shop on pets/cosmetics."

For those players who jumped into TitanReach recently, especially as the closed alpha packs went on sale, even bringing free to play to early acess, Square Root states they have "refunded every credit purchase since the 9th of August." This, they say, is their way of fulfilling their "vow" to not spend any of the money raised via the sale of those packs until they could share "successful news." However, the ability to buy new credits in TitanReach has ultimately been disabled.