TitanReach is no more. This time, it seems that it will be for good. TitanReach has been shut down and Square Root Studios, the game’s developer, has also closed.

According to images shared on Reddit, developer Hayden (Unravel) Dee posted a message saying the server would be shutting down and noted that "the reasons for this are private" , mentioning that the funding was being done in monthly installments and about $200,000 of funding over the past two and a half years of development came directly from the community. He ended the message about the server shutdown with a desire to share the plans that they had for the future of the game. Those plans are centered around crypto and NFTs. 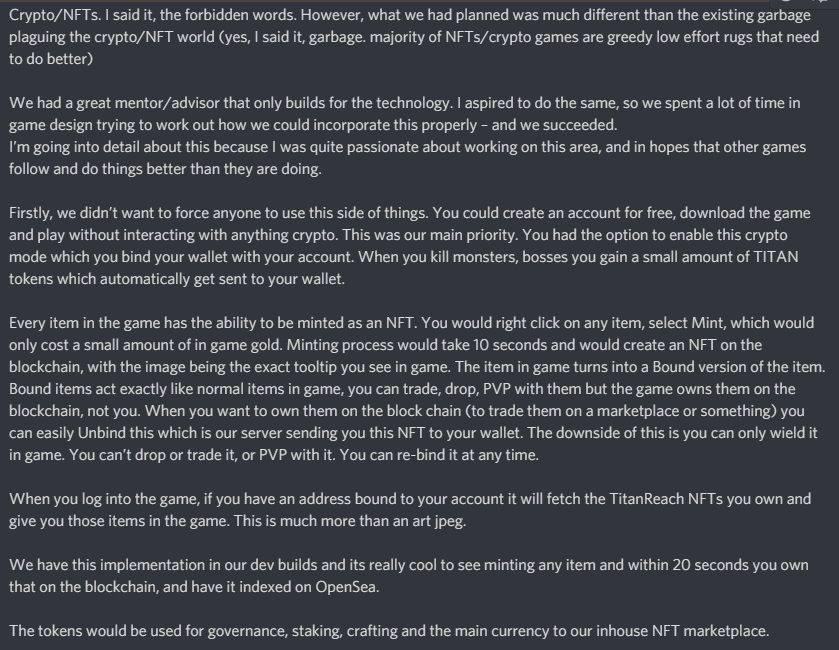 Their plans included a type of Titan token that would be connected to a crypto wallet that could be enabled so that you could do things like kill monsters and earn a small amount of coin. Every item in the game would have been able to be minted as an NFT. Their goal was that crypto mode would be something you had an option to engage with, but wasn't required. He claimed that their plans were different than anything currently out there that he calls greedy but also says that his small team succeeded in doing something to “incorporate this properly”.

The game has had an uneven history, with the small indie MMORPG being announced as influenced by classic MMOs like RuneScape and others and sought to reimagine a classic experience in a modern game. Development began in 2019 and a period of development was followed by a free early access period. In 2021, they suspended development and most of the small team left, citing a lack of funding. Then there was word that a private backer had shown interest in fully funding TitanReach’s development. The team quickly moved to send things back into private development, shutting down the servers to change with few updates following that announcement.

Now, it seems, the funding and direction just never worked out in full.