The Lord of the Rings Online is going south after spending a few years in the northern reaches of Middle-earth. The latest letter on the LotRO website unveils that the Free Peoples will be heading south, into lands unseen in the MMO before, Umbar.

The team teased this last year, stating that players who "like the smell of salt water" would be happy with the direction. Sitting across the Bay of Belfalas from the Gondorian stronghold of Dol Amroth, Umbar sits on the coast of Harad, the region south of Gondor. The Haradrim and the Corsairs of Umbar are known to anyone who has read the books or seen the movies as they made up a chunk of the force that laid siege to Minas Tirith during the War of the Ring, though the stronghold of Umbar hasn't really been explored outside of the pages of the books.

Originally a Numenorean settlement during its expansionist days, Umbar fell to the Black Numenoreans at the end of the Second Age, and at times was both part of Gondor and at War with Gondor thanks to the rule of its Corsair Kings. It'll be interesting to see exactly where in the Fourth Age timeline we see ourselves setting foot upon the haven of Umbar, and whether that's part of King Elessar's army coming to subdue the Haradrim, or as envoys of peace...or both? 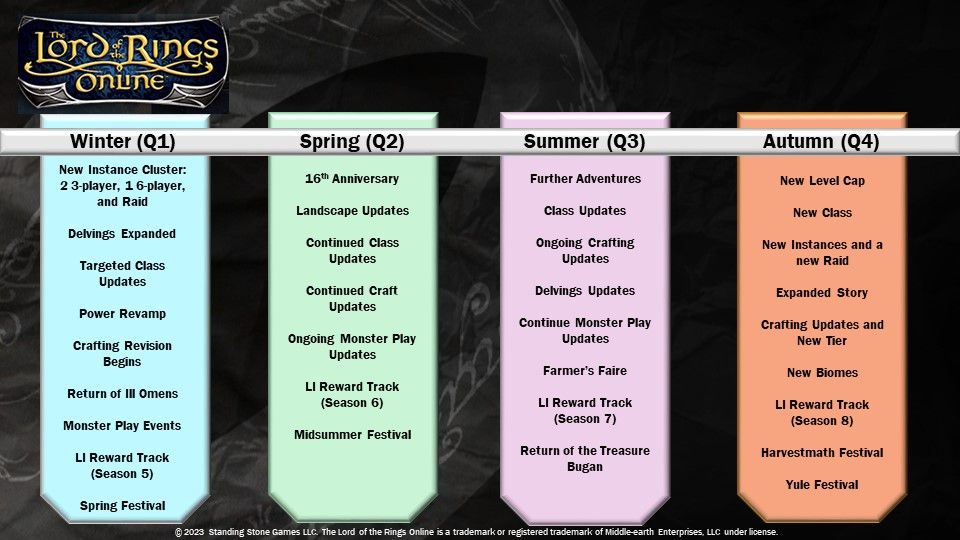 Meanwhile 2023 will see the addition of what Standing Stone Games calls a new Instance cluster: The Return to Carn Dum. Carn Dum is one of the original three end-game instances from Shadows of Angmar, and Standing Stone Games is adding two new three-player instances, a six-player instance, and a raid to the region as well for the current end game. Also coming are improvements to the Delving system, including the addition of the highly sought-after School and Library of Tham Mirdain.

2023 will also bring seasonal events, revisions to crafting, new events inside the Ettemoors for PvMP players, class updates starting with the Captain and Warden, and more. Additionally, SSG is planning to release a "new version of Gondor, no longer dawnless and harried by enemies on all sides." To support all this, including the new expansion, the level cap is also increasing this year.

You can read the full letter from Lead Systems Designer Allan "Orion" Maki on the MMO's website. Needless to say, tomorrow's Cord of the Rings stream should be jam-packed with info.