The Elder Scrolls Online’s next chapter explores one of the lesser talked about races of Tamriel, the Bretons. Heading to a new location not seen in any Elder Scrolls game in the past, the next chapter titled High Isle takes the MMO’s storytelling back to its own roots.

The team at ZeniMax is once again telling a story over the course of this year, titled the “Legacy of the Bretons,” taking players to the Systres Archipelago where the isle of, well, High Isle is located. Drawn there by peace talks intended to end the Three Banners War at the heart of The Elder Scrolls Online, however political intrigue encompasses the isle, especially with The Ascendant Order on the prowl.

“They are a group of, I guess we call them rogue knights,” ESO’s lead writer Bill Slaviscek told MMORPG in an interview last week when asked a bit about the background of The Ascendant Order. “They keep their identity a secret. Nobody knows who they are under their helmets. But they’re kind of protesting the Three Banners War. On the surface, they have a very noble cause: let’s end the war. The problem comes from their methods for doing that.”

High Isle itself draws from both Breton culture in the Elder Scrolls lore, but also from the architecture of the Mediterranean region. What we see is a mix of the feudal society we saw on the mainland with the flourishes and flair of Mediterranean life. The High Isles are full of medieval touchstones, with castles, tournament grounds and more that speak to the feudal life that the Bretons live within

“We wanted to take the what the Bretons were known for and show what would happen if they moved it to the Mediterranean,” Slaviscek says. “So we try to show that kind of evolution.”

This year’s story centers on the Bretons themselves, an oft-forgotten race among the rest of Tamriel. Exploring Breton culture, especially digging into the more interesting aspects of building this year-long story according to The Elder Scrolls Online’s Loremaster Leamon Tuttle.

“[W]e knew we wanted to get the Breton’s, but like you said, we know a lot about them but it’s all this sort of surface information, right? It’s like, we know that they have a kind of Knightly society. People get stuck on them living in sort of the generic fantasy space, which I think is pretty rough. But there is a lot there to dig down on. So the lore was kind of flat, it wasn’t particularly deep. So we got to really dig into all the medieval feudalism, what goes on with the various noble houses, how they interact with each other, and how they try to work around each other or through each other. You know, through assassinations and stuff because there is a lot of kind of petty, political squabbling that’s sort of inherent to their society.”

That political intrigue plays at the heart of the story being told in this year’s chapter. Getting back to their roots was one of the phrases mentioned by Matt Firor during the reveal, and while the goal according to Bill is to always tell a good, exciting ESO story, in recent years the stories have felt a little same-y. Daedric invasions threatening the land are interesting for sure and can open up some interesting story elements, but after a few years of fending off world-ending threats, it feels refreshing to talk about the narrative which framed The Elder Scrolls Online since it launched almost a decade ago.

However, the MMO isn’t stopping building upon many of the successes from the last few chapters. Companions, introduced in Blackwood, is getting a couple of new adventurers to meet and quest with. This time around Ember, a Khajiit magic user and Isobel, a Breton Knight can join you on your journey. 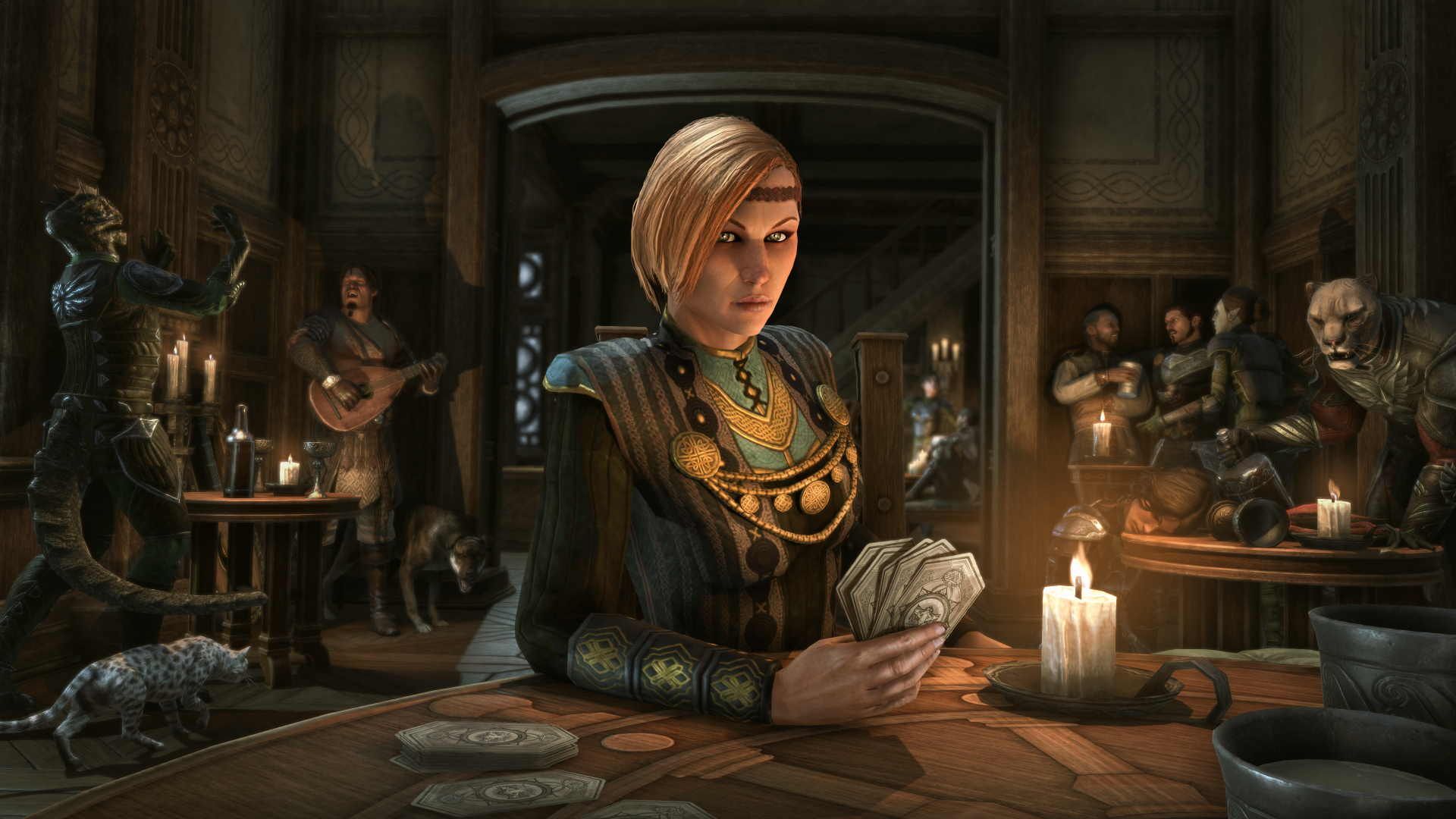 Coming with the Chapter this time around is a new feature: an in-game card game called Tales of Tribute. The game itself was invented in High Isle and players can play this resource-building game against both players and characters in the world alike.

“We’re always trying to provide opportunities for players who want to do something in Tamriel that isn’t running around fighting monsters and questing,” Tuttle explained. “This Tales of Tribute game is awesome. It comes with a full questline to run through, dailies, there’s also leaderboards where players will be able to compete against each other. Things like this make the world feel more real, which is something that we’re always trying to do, particularly with The Elder Scrolls, because realism in that sense that it’s a real place is kind of important to the franchise and how it works.”

As with the recent yearly adventures, “The Legacy of the Bretons” will kick off March 2022 with DLC, titled The Ascending Tide, which sets up the High Isle chapter with two new dungeons. Four major updates over 2022 will plunge players into the political intrigue and in-fighting of Breton society as the representatives of the Three Banners War try to talk peace. It’ll be interesting to see how it plays out this year, as The Elder Scrolls Online’s High Isle chapter will hit this June 6th for PC, Mac and Stadia, while Xbox and PlayStation players will be waiting till June 21st to see what The Ascendant Order is up to.