For those who have been waiting to get their hands on World of Warcraft: The Burning Crusade Classic's beta, you might not have much longer to wait if an internal email leaked on Reddit is any indication. The leak, posted by Reddit user zon3tknew3, points to an email sent to Blizzard employees about the upcoming closed beta for The Burning Crusade Classic coming later this month.

The email itself talks about the upcoming beta, telling Blizzard employees who received the email that they can either bring over an existing World of Warcraft Classic characters, or start fresh from scratch with a Blood Elf or Draenei (or any character for that matter). 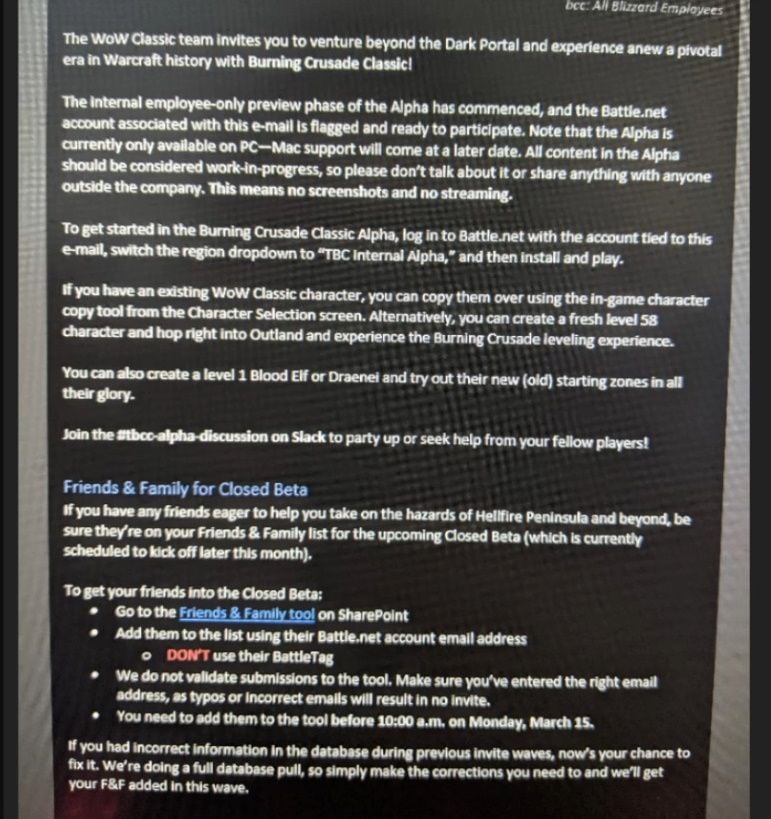 The interesting bit of the leaked email points to the upcoming Burning Crusade Classic closed beta test, which according to the leak says it's scheduled for "later this month." Take this with a huge grain of salt, however, as there still has been no official announcement from Blizzard proper. Some speculation is swirling that it could start as early as next week due to the part of the email about the Friends and Family invites. Blizzard is instructing employees interested in adding anyone to quest with them to have them submitted no later than the morning of March 15th, leading to the speculation it could start as early as next week.

Whenever World of Warcraft: The Burning Crusade Classic kicks off its closed beta test, players can make sure they are prepared by checking out our BlizzConline interview with the developers about the upcoming release of the expansion.