[Update: 4:12 PM PT 5/13/2021] Amazon has confirmed it is doing testing on its cash shop this Alpha in a comment in response to our request. Amazon notes in its comment that it is "aware that there are concerns" regarding its "storefront testing" in alpha at the moment. It stresses that items in the shop at launch of New World will be focused on cosmetics, denying there will be "no boosts of any type for sale."

Here is the statement in full from our Amazon Games representative:

"We are aware that there are concerns around the storefront testing we are currently doing in Alpha. To be clear, at launch all of the items in the shop will be focused on cosmetics, and there will be no boosts of any type for sale. We will share more on our vision for MTX in the near future."

In a new rumored leak from the under-NDA portion of Amazon's New World, it's being reported that there will be testing on the premium currency which will be in the upcoming MMORPG. The note mentions cosmetics as being purchaseable, but makes mention too of convenience boosts, raising the question of whether New World will be pay to win.

For starters, it's important to note that this is a leak and not something officially confirmed by Amazon Game Studios, so take that with a grain of salt. We have reached out to our Amazon representative about the veracity of the leak as well as a few follow-up questions regarding the boosts and will update this story should they respond.

In the leaked post, being circulated on Reddit (the post on the MMORPG subreddit seems to have been deleted, though another thread is going on the New World subreddit) and other social media platforms, the news is reportedly coming from the NDA forums for New World's alpha testers. The note makes mention of a premuim currency coming to New World, which will be used in the in-game shop for cosmetics, dyes, premium emotes and more. However, it makes notes of potential plans to sell "quality-of-life items or boosts," specifically mentioning ways for players to "improve their time spent leveling up their character and trade skill experience." 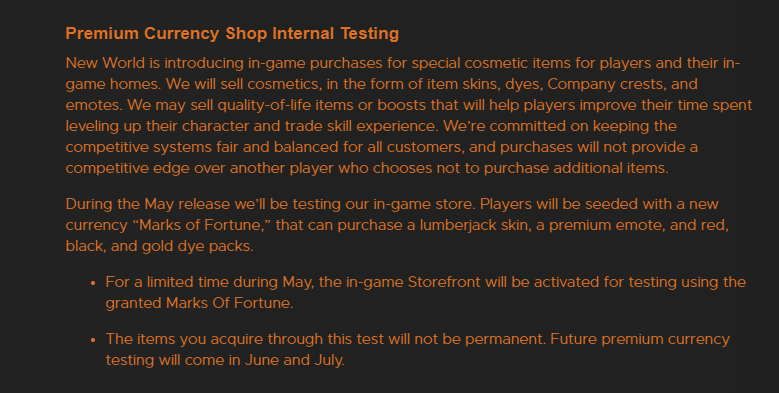 "New World is introducing in-game purchases for special cosmetic items for players and their in-game homes. We will sell cosmetics, in the form of item skins, dyes, Company crests, and emotes. We may sell quality-of-life items or boosts that will help players improve their time spent leveling up their character and trade skill experience. We’re committed on keeping the competitive systems fair and balanced for all customers, and purchases will not provide a competitive edge over another player who chooses not to purchase additional items."

Now cash shops being in MMOs are nothing new, with many MMOs nowadays thriving on their in-game stores. The Lord of the Rings Online was reported to have tripled their revenue when launching Free-to-Play with its in-game shop years ago, so it's a strategy many MMOs are going to employ. The sticking point for many potential players is on the in-game boosts being mentioned, citing concerns this could mean New World is pay-to-win.

One Reddit user talked about the trade skill boost being "questionable" thanks to how gear is supposed to work in New World's end-game. Other users point out that if it's done the way Path of Exile handles their cash shop, they personally would be okay.

It's interesting to note too that in today's Alpha patch notes this wasn't mentioned as part of the update, with it reportedly only available information to those currently under NDA. YouTuber KiraTV also mentions the leak in a new video, whic you can check out in the embed below.

As always, with leaks take this with a grain of salt. Again, we've reached out to our Amazon representative and will update this article with any response they give. But if this holds up come July's closed beta test, it'll be interesting to see how community feedback to this leak influences the types of items New World's developers ultimately include in their storefront.

Thanks to Slapshot1188 for the tip!