Raph Koster is sharing more insights on the Playable Worlds blog, this time talking about player-driven economies, and more importantly the social fabric that ties in-game - and real life - together. In the piece he briefly lifts the veil behind some of the design philosophy his team is working on with their upcoming MMO.

In case you're unaware, Raph Koster is one of the more well known MMORPG developers in the industry, having worked on titles like Ultima Online as the lead designer, as well as the creative director of Star Wars Galaxies. Recently he talked about how game worlds can feel alive in MMOs, teasing the team's design approach to their upcoming MMORPG.

Now, Koster has taken to the Playable Worlds blog to talk about trust, especially as it pertains to interactions in-game, especially in an economy. Talking about how games have "fallen into a few templates," such as the "play alone together" model (like ESO's soloable/multiplayer model for example) or others devolving into just gankfests, Koster imagines a game world where those interactions are the core, but rather envisions a game that "caters to the full range of players."

To Koster, this full range of players is what keeps games alive, people like the roleplayers, those who write strategy and build guides and more. Koster goes into how games that don't cater to the full breadth of players out there actually punishes those who help keep the game alive as a whole.

"In fact, the game basically punishes those players by omission! Time spent doing those incredibly valuable things is time not spent popping XP bags for levels or collecting the six foozles for your latest quest giver. And that means these players fall behind their friends."

The Playable Worlds team feels that players shouldn't have to choose between the activities that keep the game alive versus those that advance their individual character. Instead, all types of gameplay should be rewarded. Part of this is how all the ancillary activities tie into the game's economy, as well as the cycle of trust between the game and player, as well as between players themselves.

"Psychologists have studied the levels of trust and intimacy – and we can use these for game design! Gankbox games are worlds of no trust, soloable games are low trust, and team-based games are high trust. But a game made for one narrow band of the human experience is inevitably going to burn its players out for one reason or another.

What is crucial is being able to move up and down that ladder, and for that, you need systems that enable and encourage different levels of relationship. And for millennia now, real human societies have used an invention called “currency” for that."

As such, Koster lifted the veil on a chart that shows how the in-game economy works in the upcoming MMO the team is working on. It's a little hard to read, especially since even when you blow up the image you can't really discern the text in each bubble, but it showcases an interwoven web of interactions designed to ensure that everything a player does is worth something. Koster describes interactions from the basic being able to mine materials, refine and sell them to even running a great Twitch stream. 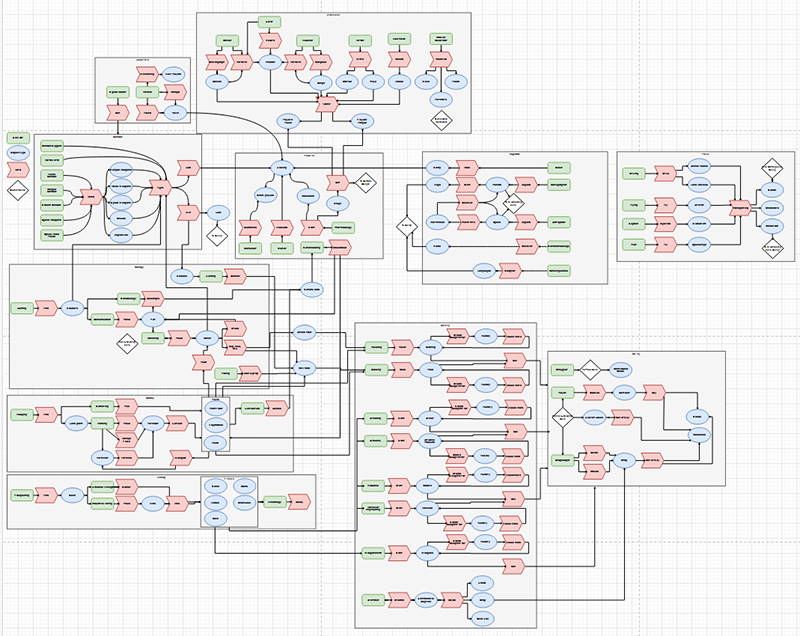 It's reminiscent of finding your role in your group or guild, such as being the expert crafter kitting your team before you go into a dungeon or maybe being the vital part of your EVE Online's trucking infrastructure, moving materials from Nullsec to Highsec markets. Every step of the way, every interaction is important, which is a philosophy Koster is getting behind. A game where every role serves an end purpose and is rewarded.

Check out the full blog post on the Playable Worlds blog for Koster's full thoughts as to what's driving this design philosophy.