The cat’s out of the bag: Nvidia has officially revealed its next generation of graphics cards, beginning with the RTX 3080 on September 17th and the RTX 3070 in October. Also announced was the massive RTX 3090, an incredible, triple-slot GPU Nvidia claims can support 8K gameplay at 60 FPS, as well as several exciting software developments.

The GPU stack is powered by Nvidia’s new Ampere architecture, which brings with it some massive improvements.   A big theme of the event was the massive performance leap these cards will bring to the table, particularly with ray tracing, but also with the neural network-powered DLSS technology.

Here is a breakdown of the three Ampere cards announced at today’s event: 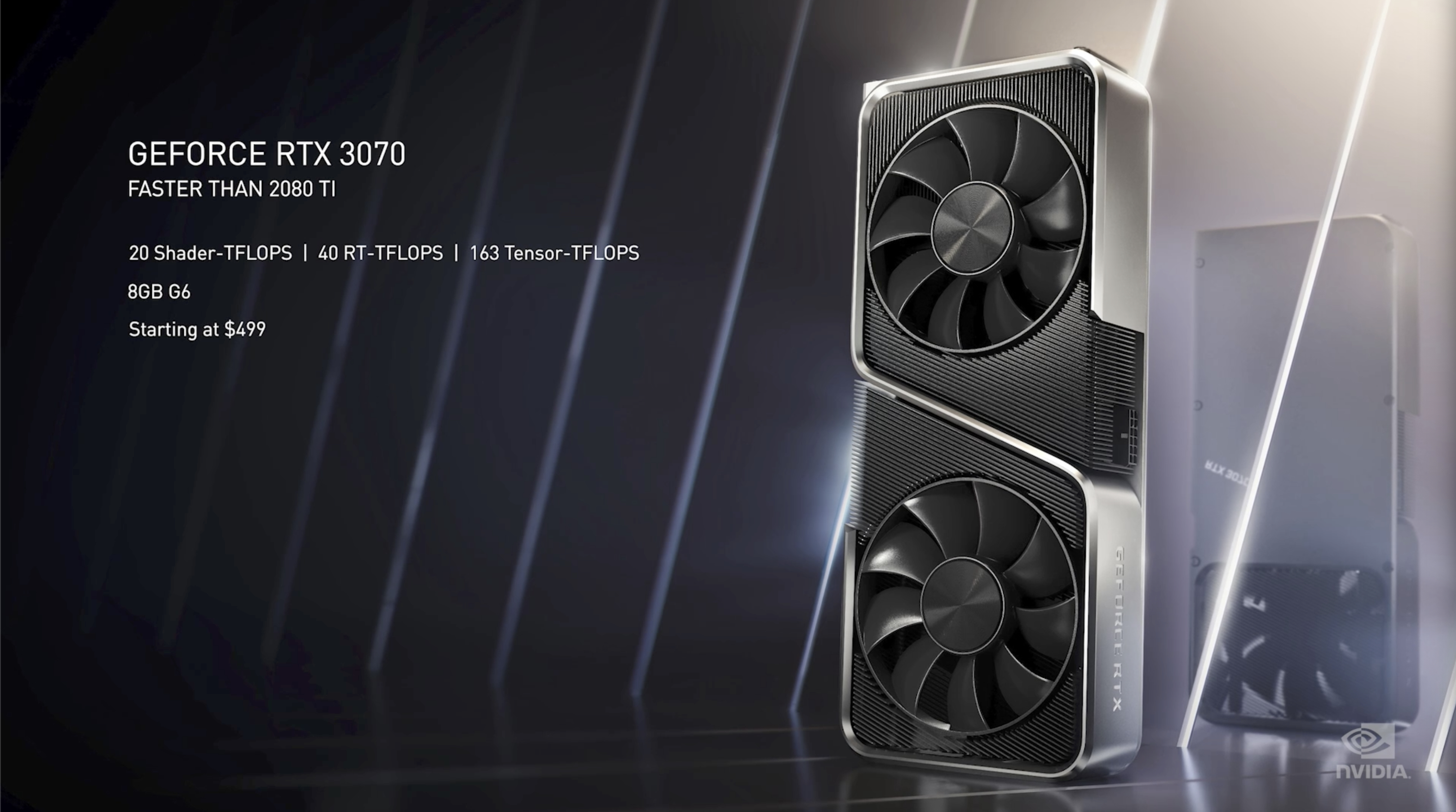 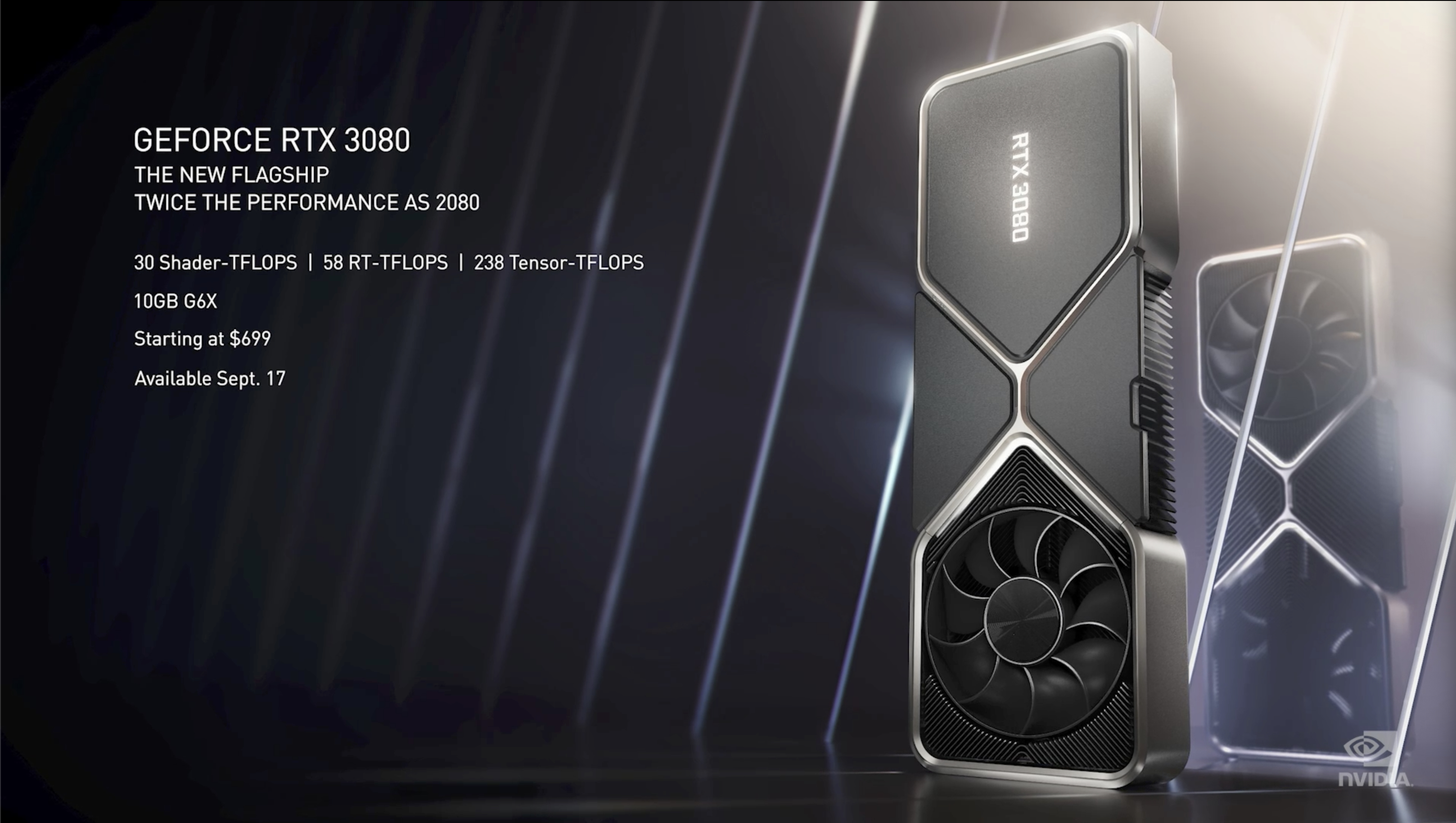 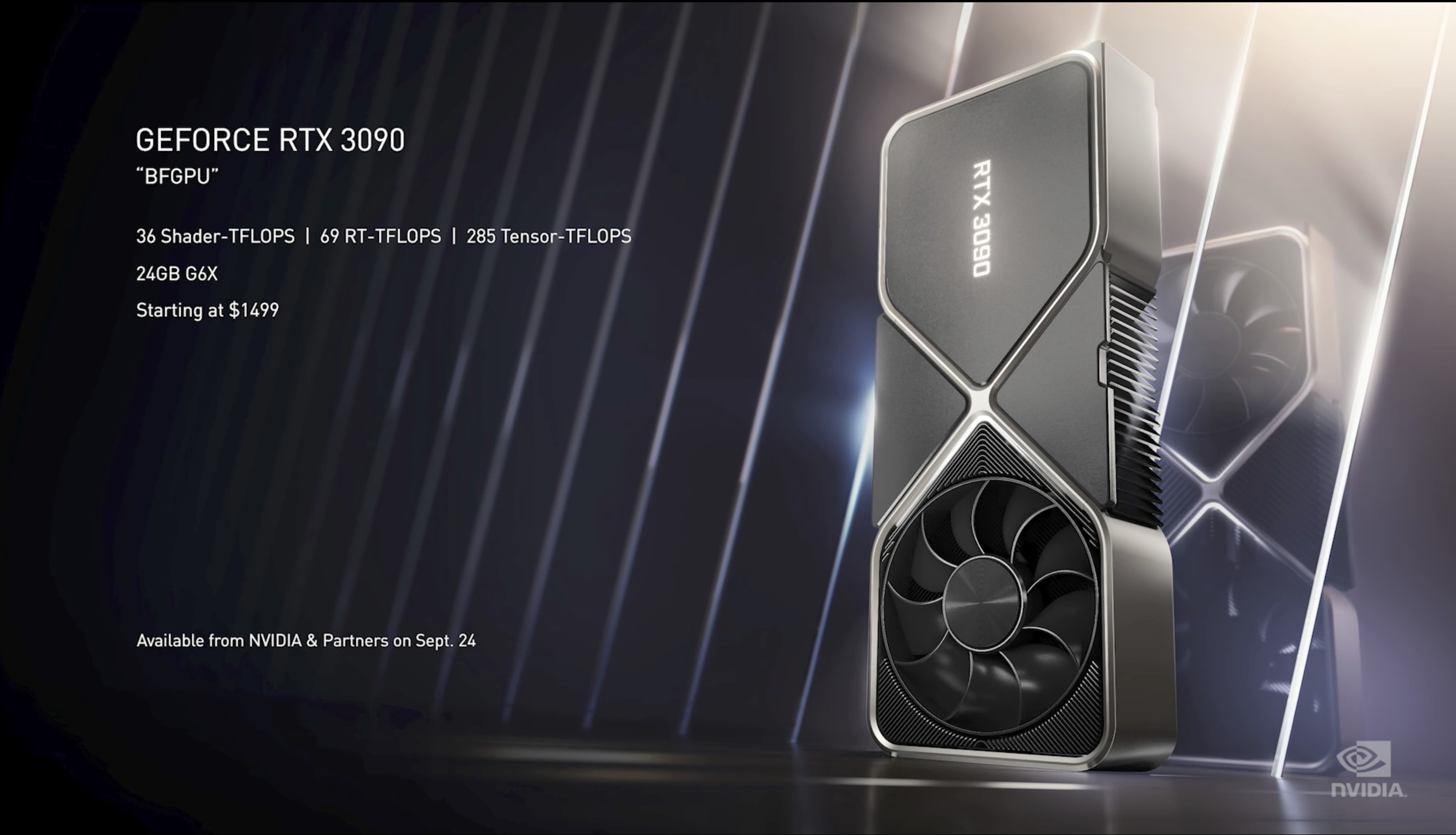 Each of these cards purports to offer massive performance gains over the prior generation with ray tracing enabled by dramatically increasing (2.7x) the hardware within. In his presentation, Jensen Huang, CEO of Nvidia, repeatedly stressed how Ampere would double the performance of Turing, making this the “greatest generational leap” Nvidia has ever had. In particular, the RTX 3080 was shown as having twice the performance of the RTX 2080 and the RTX 3070 as being “more powerful than a 2080 Ti.” Here’s an example of the performance improvements shared during the conference: 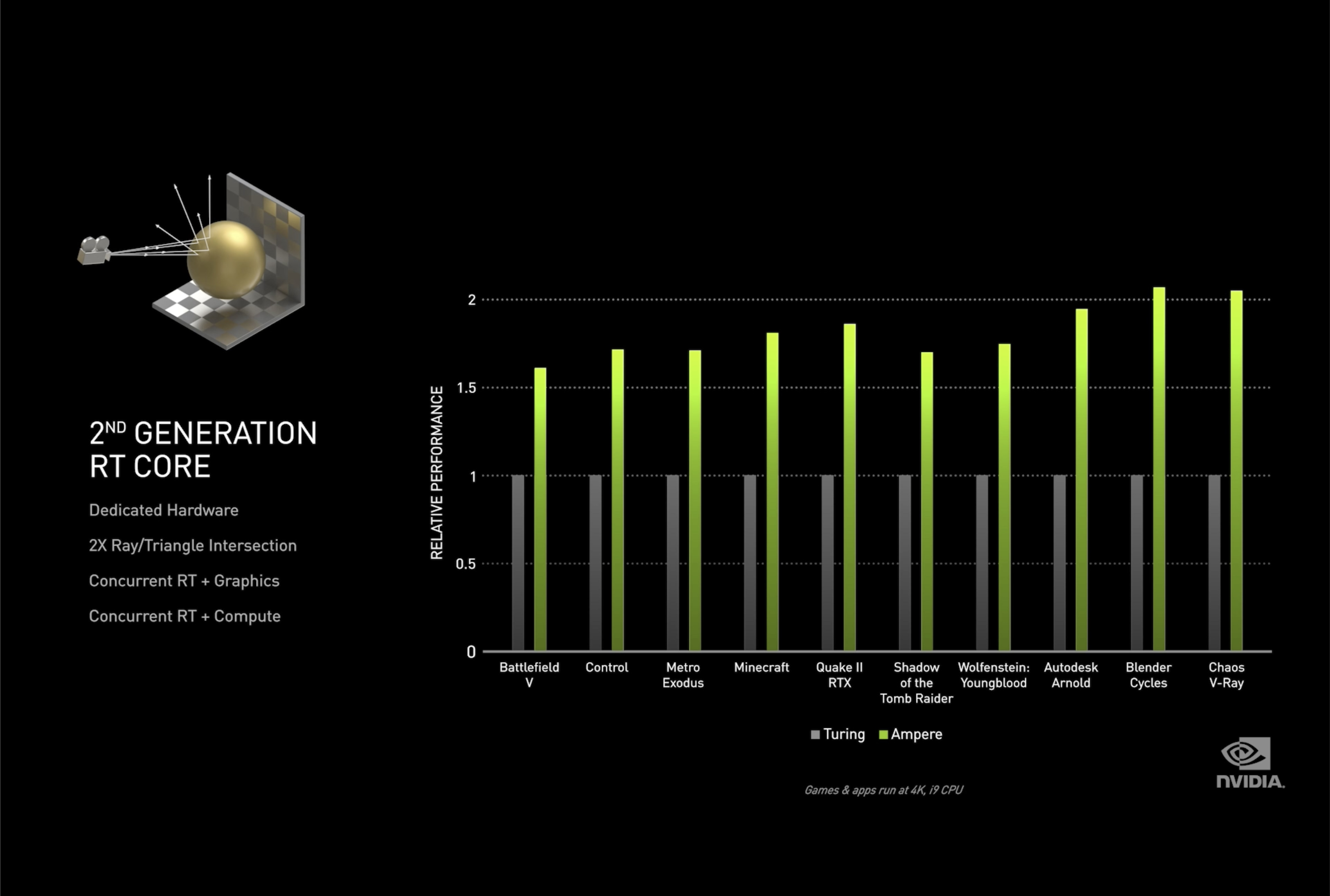 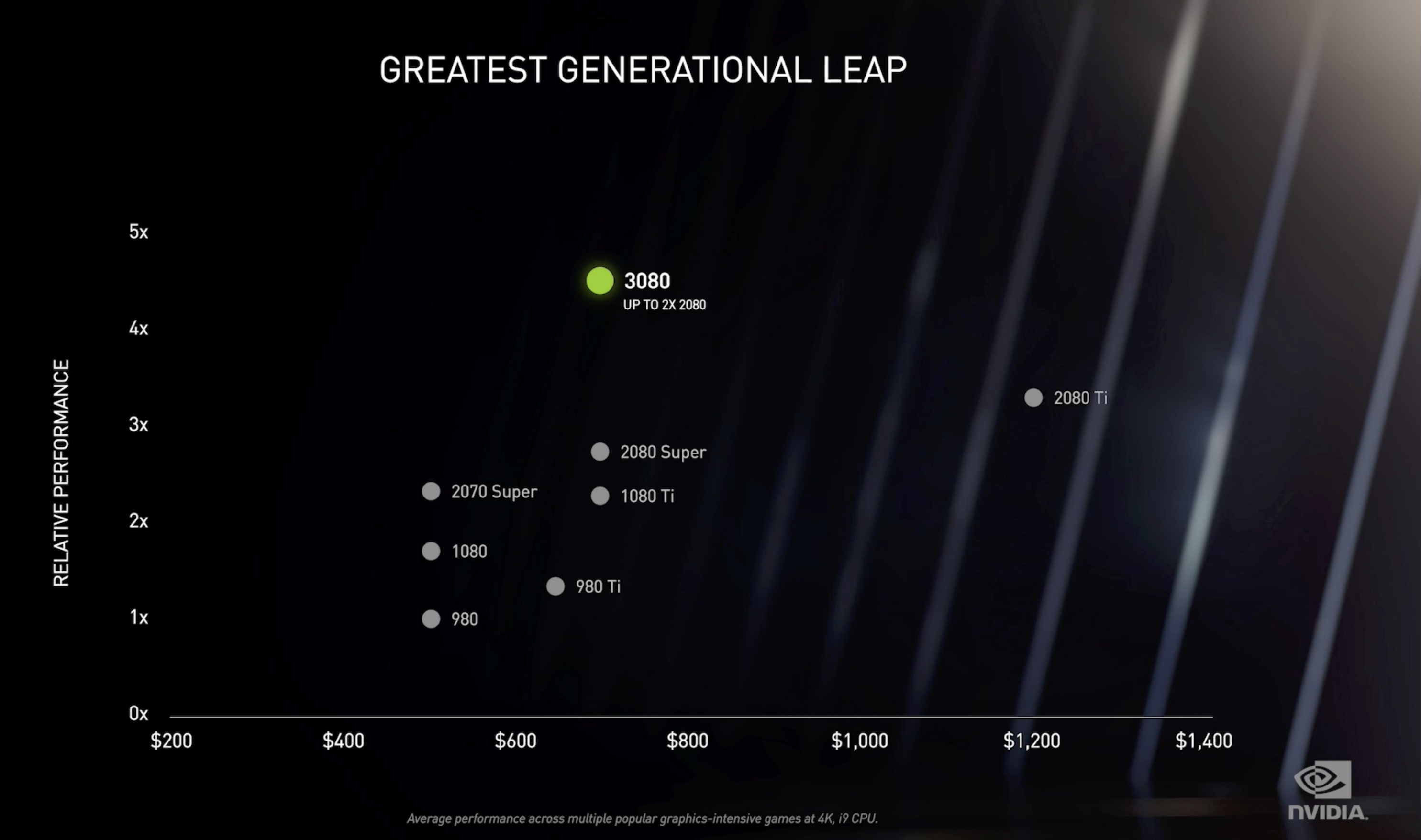 These new cards feature improved dual axial coolers with one fan on each side. The fan location channels air both into the path of the CPU cooler to exhaust from the rear of the case and directly out the back of the card akin to blower-style coolers. The similarities appear to end there, however, as combined with a more compact PCB, Nvidia is promising that these cards will be 20 degrees cooler and 3 times quieter than the coolers found on the Founders Edition Turing cards. Jensen went so far as to call the cooler on the RTX 3090 a “silencer” that would reduce noise levels up to 10x from Turing while lowering temps 30 degrees. 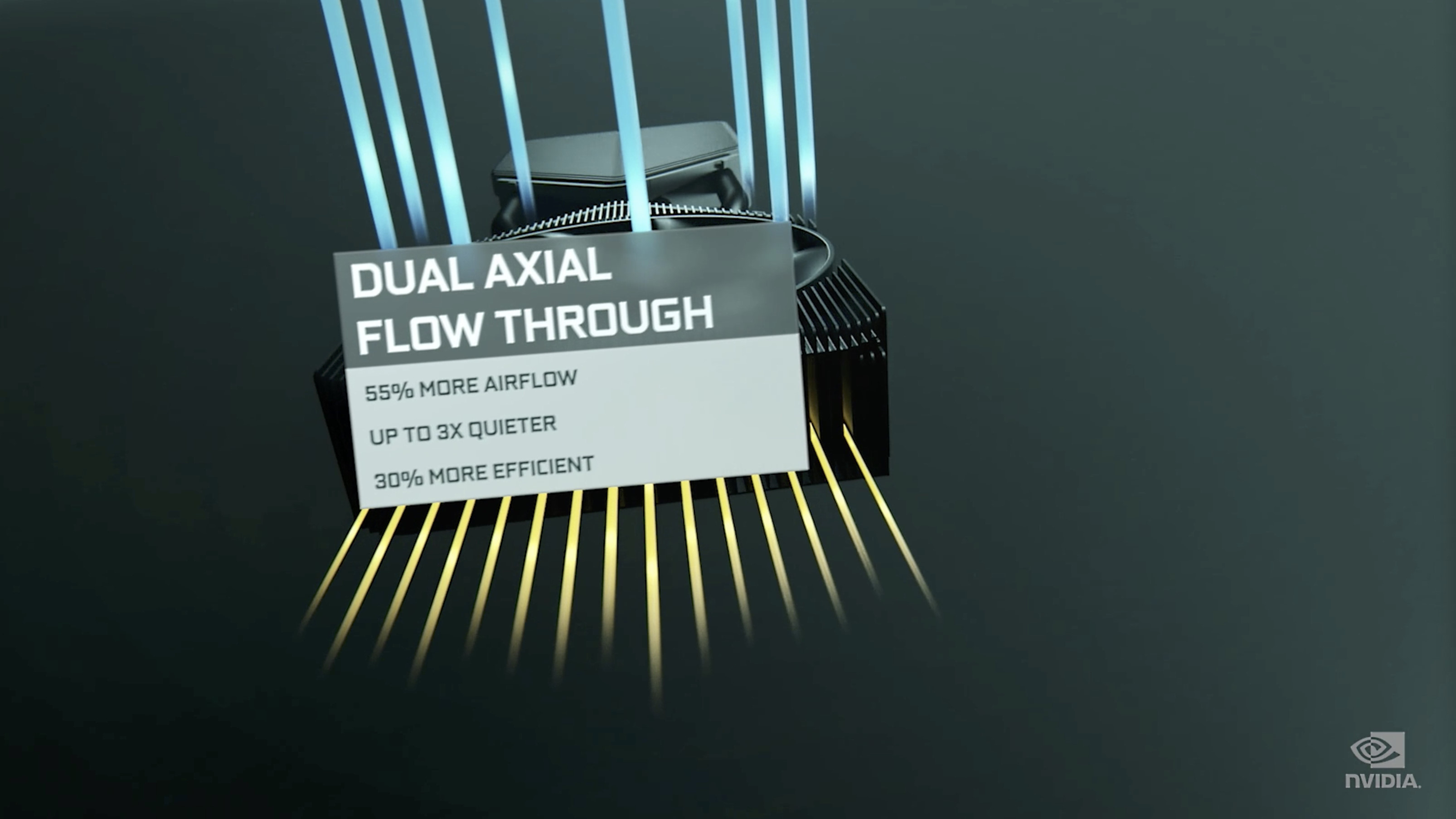 Nvidia also seems to have taken the feedback on pricing to heart. The RTX 3080 will launch at $699, a full hundred dollars less than the RTX 2080 at launch. The RTX 3070 will come to market at $499. The price to performance ratio, should the gains be as large as shared during this conference, looks to be tremendous. The RTX 3090, on the other hand, will be $1499 and launch September 24th. 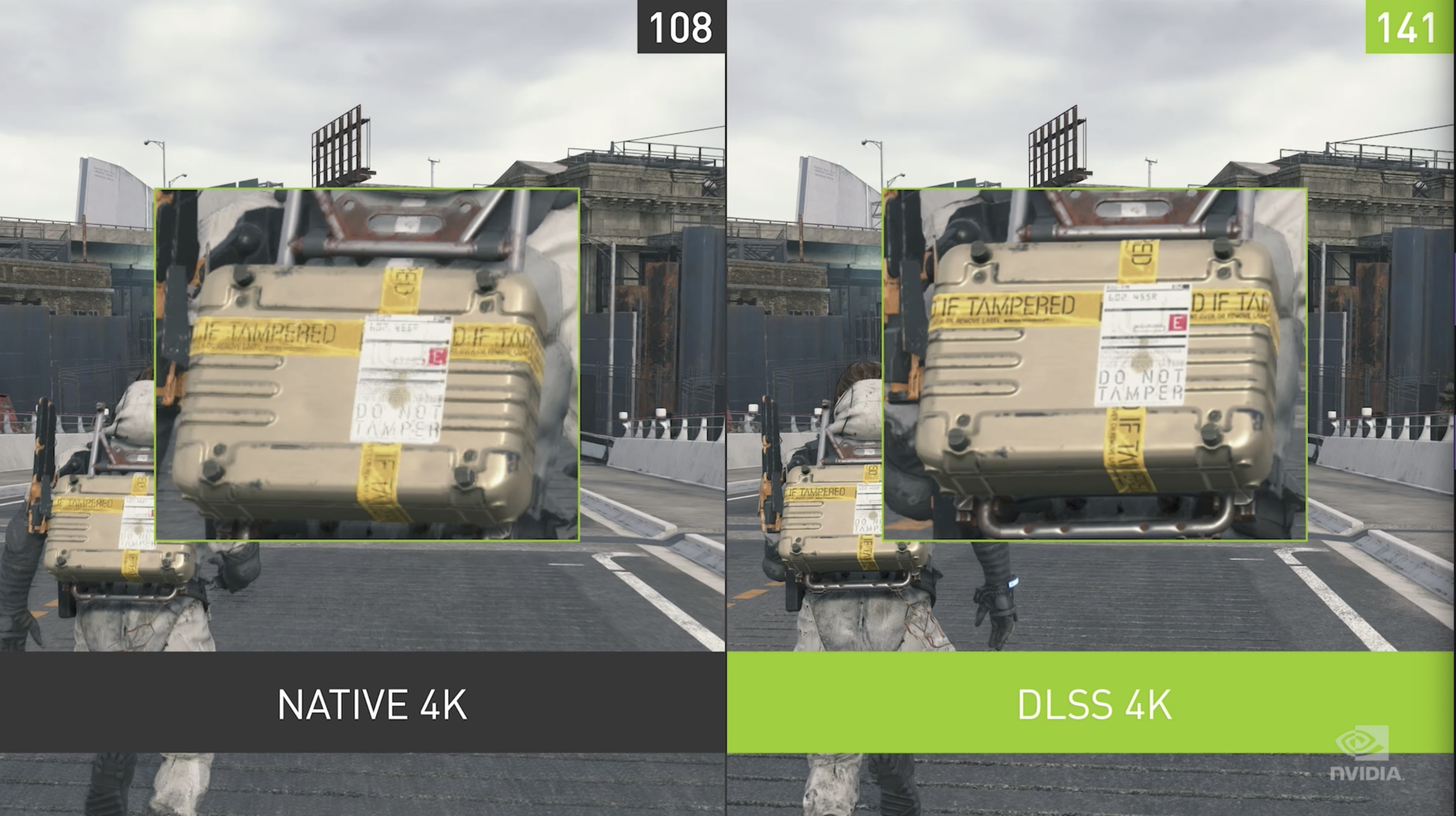 Nvidia also had a few other tricks up their sleeve with some software enhancements. The foremost among these was DLSS, which has been improved to increase clarity without the performance hit users experienced when the technology first debuted with Turing. One particularly salient example showcased was Death Stranding, which showed that DLSS 4K actually provided a crisper, clearer image with higher framerate than native 4K.

RTX IO was another exciting announcement. This technology allows for incredibly efficient data transfer between the CPU and GPU, increasing throughput up to 100x with 20x lower CPU utilization. Like the upcoming PS5, Jensen promised instant reloading where you last left off in your game and that “vast worlds will load instantly.”

We also saw a couple of neat programs with with Nvidia Reflex, Nvidia Broadcast, and Nvidia Omniverse Machinima. Reflex is targeted at eSports players, cutting input latency in half and will be enhanced further with upcoming 360Hz monitors from ASUS, Acer, and MSI. Nvidia Broadcast is designed for streamers and content creators and offers AI noise removal, intelligent background effects, such as background blur or a virtual greenscreen, and web framing. Nvidia Omniverse Machinima, on the other hand, is a storyteller’s system that allows creators to use game assets, create animations, apply camera work, and even utilize lip sync to create their own machinimas.

This was an exciting event, but be sure to stay tuned here as we cover the Ampere launch later this month.