Server transfers that were long promised opened up to the wider New World playerbase, only to be shut down a day later thanks to a gold dupe exploit. This is amidst the backdrop of an in-game economy that is staring down deflation of its currency.

First things first: server transfers were opened up to the wider audience late yesterday afternoon after hours of tests on the AP Southeast server region earlier in the day. However, after what Amazon states have been "aproximately 150k players" were transferred, invalid data states began to populate, allowing players to effectively duplicate their gold while in the effected state. Per the official forums: 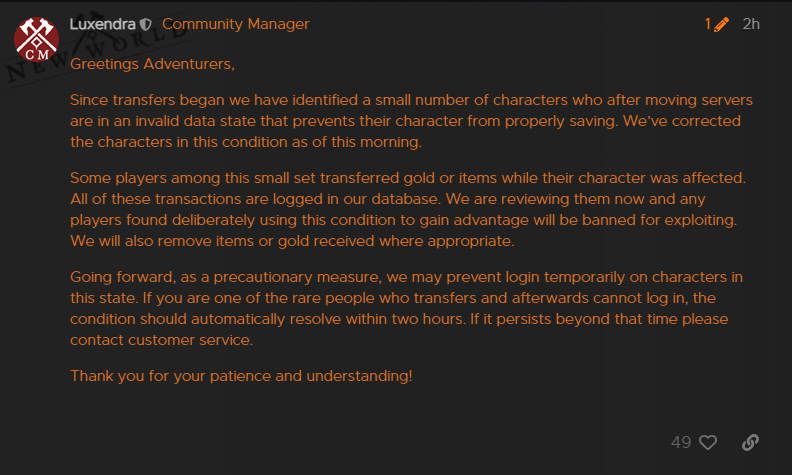 As a result, an hour or so later, Amazon has shut down server transfers as new transfers are starting to become affected by the invalid data state, according to Amazon's follow up post on the forums. As such, transfers are not being turned back on until the team can "evaluate how [they] can prevent future occurances of this problem."

"We’ve transferred approximately 150K players since character transfers went live. A small number of those have resulted in characters with an invalid data state that needs to be corrected. We’ve done that for those affected last night, but there are a still some new transfers affected that we see happening. We have paused character transfers and evaluate how we can prevent future occurrences of this problem. When that is resolved we’ll resume the service, with an announcement ahead of time."

This gold duplication exploit is coming admist something of a crisis for New World's player economy, as deflation has started to take hold among the many servers in-game. As reported by Player Auctions, effectively there are too many gold sinks in the MMO, yet there is simply not enough ways to make gold to counterbalance them. Almost every interaction with your inventory, crafting, trading, or even housing costs gold. With no NPC vendors to sell trash to, you're left to salvage old gear for repair parts. While salvaging does give back some good, it's not enough to counter balance the other hood sinks around you.

There is the gold you pay simply to craft, whether it be tanning leather or a piece of armor. Trading costs a listing fee and a transaction fee once something sells, or a fee when you buy off the market. Housing taxes also play a role here, meaning homeownership in New World comes with the same haggling over property tax rates that mirror real-life.

Yet the amount of gold earned in the various quests or killing monsters is simply not sustainable, especially as companies need to increase tax revenue to keep their settlements bustling with projects, quests and improvements. It's gotten so bad in New World that some servers have abandoned the player market altogether, going back to the barter system. Gold coin has become more valuable than gold bars on Midian's market (selling for 0.04g as of this morning in Everfall), as one example, or as one Redditor pointed out repairing one piece of level 60 gear is the "same as 2500 orichalcum ore."

How Amazon plans to tackle this problem remains to be seen. Right now with the gold duplication exploit happening thanks to server transfer issues, the problems simply continue to mount for the new MMO.

(Update 2:09 PM PT: An earlier version of this article erroneously stated that salvaging gear costs gold, whilst it actually does return a small amount. The article has been updated to reflect this. We apologize for this error.)