Amazon's latest patch for New World went live early this morning, bringing back server transfers as well as the end-game PvP mode Outpost Rush. However, a side effect of this patch seems to have broken the auction house, as players are reporting that they are no receiving gold for sales that went through whilst they were offline.

The patch, which saw server transfers and Outpost Rush return to the MMO, also had a few unintended consequences. Players started reporting that they were not receiving gold from auction house sales that happened while they were offline. While not every player has reported this, and some players who initially did have the issue later got their gold deposited, the problem seems pretty widespread.

Some players are also reporting the problem affects stacks where only part of the stack has sold. One Reddit thread tested the bug and found that if they canceled an order where a partial stack sold, they received their gold, but of the whole stack sold then they received nothing. This is a pretty massive issue, especially as players list thousands of gold worth of items across every server at any moment. Given the issues New World is still facing with its economy dealing with the deflation of its currency, having a bug that doesn't properly pay out will only anger fans and exacerbate the issue.

Thankfully, Amazon has addressed the issue in a new forum post. The team has identified the problem and are working towards a solution, with an Amazon representative stating that all transactions will be paid in full. 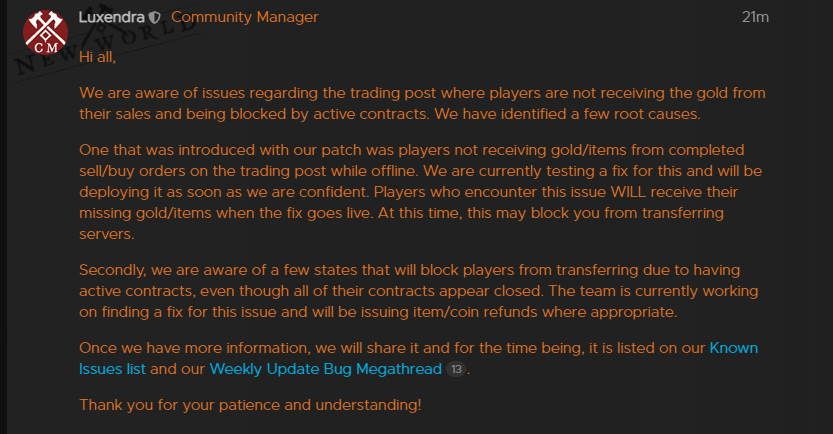 This auction house issue is in addition to myriad problems being found since the patch went live. Life Staff users are reporting issues with healing allies with light and heavy attacks, as well as an exploit that apparently allows for rapid, unlimited healing when you repeatedly crouch in a Sacred Ground AOE heal.

Due to ice gauntlet being broken, we have buffed scared ground by over 9000% pic.twitter.com/cfY2EHY3gA

While bugs are going to happen for sure, these seem exacerbated when you remember that the previous patch introduced a gold dupe exploit that closed server transfers mere hours after they were live, as well as the issues giving players invulnerability when they moved the game client window around. With that, coupled with the unlimited healing seemingly, PvP is going to be in a sore state until Amazon can get a handle on these problems.