New World's cash shop is still a concern for players who were hoping for a shopless MMO to hit the market. The team at Amazon Game Studios released a statement Friday evening addressing the concerns as well as broadening on their plans for microtransactions in New World.

The statement, released late on a Friday evening, addresses the concerns players have been raising since it was made known that alpha testers were being presented with the ability to test the shop. The news came as alpha players broke the NDA, as much of the concern comes from the fact that Amazon brought up boosts for services like trade skill and experience boosts.

Amazon addressed this in a statement on Twitter, stating that only cosmetics will be in the store, though with a caveat: at launch.

"Our plan in having a store is to create an outlet for players who find enough value in store items that they are happy to purchase them. Our plan is not, and never will be, to create a feeling that store items are necessary to enjoy the game. All players will be able to play the full game experience we ship without having to make store purchases."

The letter continued, stating that the items at launch will be "exclusively cosmetic in nature." However, Lawrence did talk about future plans with the store, confirming that the team is indeed looking at potential "quality of life items for mechanics like rested XP and fast travel." Lawrence seems to indicate this plan is to ensure more players are "able to experience all of [their] exciting end-game content." 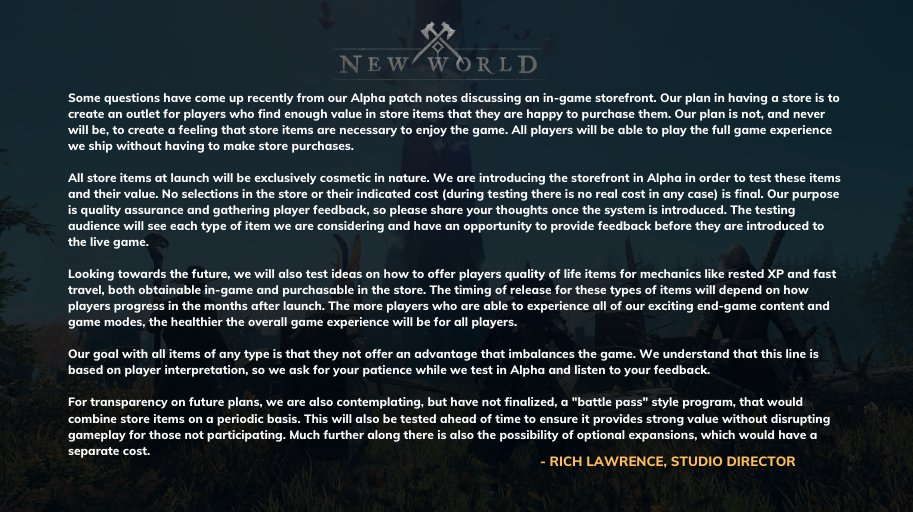 "Looking towards the future, we will also test ideas on how to offer players quality of life items for mechanics like rested XP and fast travel, both obtainable in-game and purchaseable in the store. The timing of release for these types of items will depend on how players progress in the months after launch. The more players who are able to experience all of our exciting end-game content and game mordes, the healthier the overall game experience will be for all players."

The team also touched on more future plans beyond the basic store-front, stating that they are looking into a "battle pass" style program, much like what we see in free-to-play titles nowadays. Lawrence stresses how these passes will be "tested ahead of time to ensure it provides strong value without disrupting gameplay for those not participating."

You can check out the full note to fans below.

Please read this letter regarding the storefront testing we are currently doing in Alpha. pic.twitter.com/IucMciGWC1