New leaked screenshots of the Battle.net launcher suggest that World of Warcraft's The Burning Crusade Classic could be launching as early as June 1st.

The rumors were first posted to Reddit (and subsequently spotted by WoWHead) as screenshots from Blizzard's Battle.net launcher indicating that World of Warcraft's The Burning Crusade Classic could be launching on June 1st. It's important to note, though, that these screenshots could be real, or simply an elaborate hoax. Blizzard has had a history of accidentally leaking items ahead of time, which does lend some weight to these leaks. 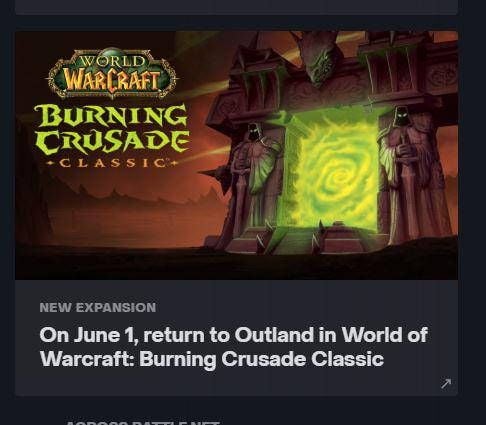 However, if this is true, it's also unclear whether this means pre-patch would be coming on June 1st, or the full launch of The Burning Crusade Classic. WowHead speculates as well that the images, if real, could have been pulled due to Blizzard deciding June 1st won't be a date they can make with the update.

The Burning Crusade Classic is currently being tested on World of Warcraft Classic's PTR and has been for a few months now. The first expansion update for World of Warcraft Classic won't simply replace the original Classic servers, as those who choose to keep playing vanilla WoW Classic will be able to do so and simple move onto TBCC when ready. In a recent interview with Game Director Ion Hazzikostas, the developer also stated that while Burning Crusade and retail's 9.1 Chains of Domination update are both being tested on their respective PTRs, it's highly unlikely they will launch at the same time. If the rumored leaks are to be believed, this could also point to when we might see the first huge update to Shadowlands hit as well. Maybe we'll see a Sylvanas redemption arc when it finally hits?