With the announcement that Conan Exiles would be entering the Age of Sorcery, there was also the announcement of a Battle Pass and how ongoing updates would shift. While  content will keep coming, there were still some unknowns and potential for confusion. The team has released a new overview for what to expect from the Battle Pass and the Bazaar.

As with other games that have added battle pass systems, there are both free and paid tiers.

Everything from the pass rewards table is designed to not give any competitive advantages. If there’s gear or a weapon, there will be something you can get in game by playing with matching stats. You level up your Battle Pass by completing Challenges. You’ll have five per day, but you can reroll up to three times every 24 hours to get something you like better.

In the Age of Sorcery update, Conan Exiles is introducing the new illusion system, which will let you take the look of a piece of gear and make an equivalent piece in another set look like that first one.

The team has also offered a peek at the kinds of items to expect in the first post-update Battle Pass, which will be, unsurprisingly, sorcery-themed. They include one-use flasks that let you cast a new sorcery spell, effectively letting you try it out, emotes, armors, building pieces, and pets. They also include Crom coins, a new currency. Play through the full pass, approximately 13 weeks, and earn enough coins to pay for the next premium pass or anything else in the Bazaar. 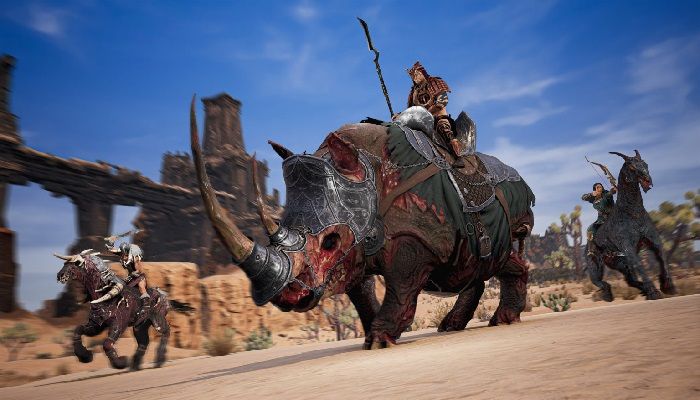 The Bazaar is where you can find a rotating selection of cosmetics and other items. Items will rotate based on a few factors, including demand, but Funcom also says you may find previous battle pass items in a modified form in the shop later.

All of these changes are designed to support the new updates model going forward. With a change over to Ages, and the pass and Bazaar models, the team can release major content updates for free. This also doesn’t put expansions as a gate to an even playing field.

For more, read the full dev blog over at Conan Exiles.