Guild Wars 2’s summer roadmap is out, and ArenaNet has announced the next chapter of Living World Season 1 will be out on July 19th. Also on the way next week are raid reward adjustments, improved world bosses, and much more.

It is looking like a busy summer for GW2. We can expect to see more Living World episodes, new Legendary Weapon skins for  End of Dragons, the Festival of the Four Winds, a Core update and the WvW World Restructuring beta return, and in August, the 10th anniversary.

First up though, is Living World season 1 Episode 3 on July 19th, where a party is planned, but of course, Scarlet Briar is wreaking havoc.  Episode 4 will come September 13th. 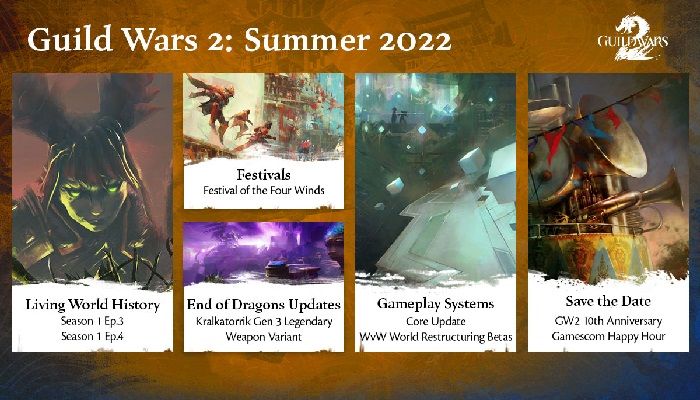 World bosses are also getting some polish and Improvement to the encounters ahead of the launch of the game on Steam. The team intends to make sure that these encounters are memorable for newer players, and also still enjoyable for the veteran players.

Essentially, they are modernizing four encounters to bring all of these encounters up to speed with modern builds. These are Great Jungle Wyrm, Fire Elemental, Svanir Shaman Chieftain, and Shadow Behemoth. The team will add skill telegraphs, defiance bars, improvements to mechanics and health pools. All of them except the Fire Elemental will also receive some graphical and texture improvements. Rewards will also start including a champion loot bag.

Raid rewards are getting changes that should simplify things and make it easier to understand how to get the rewards most relevant and valuable to you. Some of the changes include eliminating some currencies and simplifying these costs without reducing reward. Since the game will release on Steam and the team wants to grow the endgame PvE Community, this is one step they are taking.

The Guild Wars 2 team will be marking the 10th anniversary on August 23rd. More details on much of these are still to come, but you can read the summer roadmap update over at Guild Wars 2.