Did you miss the Phantasy Star Online 2 Prologue 1 stream on November 19th? Even if you happened to catch it, a lot of people complained that the translators were incredibly tough to follow. We’ve broken down the information as best we could for your reading pleasure.

What is Phantasy Star Online NGS? To get started with the stream Hiro Arai, a “PSO2 NGS Official Navigator” jumped in to give us some information on what the differences are between PSO2 and PSO2 NGS. A few easy to read screenshots were provided to let people know where PSO2 NGS came from, and some of the direct features that players will see changing in New Genesis. If you'd like to watch the entire hour and 45 minutes worth you can find the entire stream below, otherwise, keep reading for a much faster breakdown!

They broke down exactly what players can expect in the gigantic leap forward which includes: 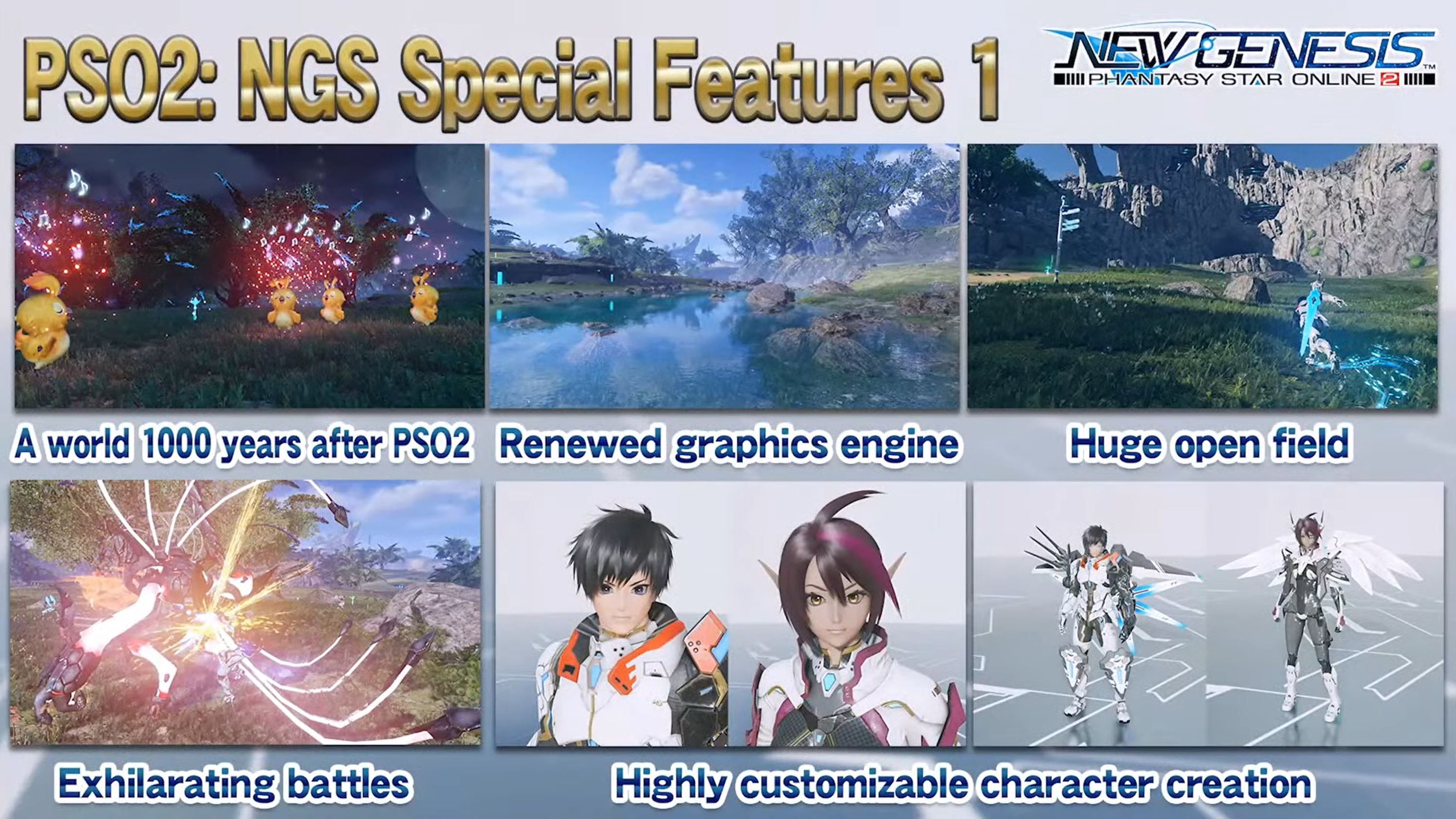 Due to the increased graphics requirements for PSO2’s graphical update, new minimum PC requirements will be required. Those details have yet to be released, but the development team at SEGA said that they would do their best to adjust the settings as necessary to make it as accessible as possible.

A new updated cinematic teaser trailer was also provided, that included a new audio track and some additional upgraded graphics. You can check it out below:

The next segment had to do with the world 1000 years in the future and how those differ from what players have dealt with in PSO2. Players will immediately be brought into a war with the DOLLS, as they plan to wreak havoc on the people of Halpha. This is somewhat similar to how the story began in PSO2 with the Falspawn.

ARKS operatives are made up mostly of people from Halpha but there is also a new wave of ARKS operatives that hail from pods, these people are known as the Meteorn. The main story follows a Meteorn as they land in Central City – the largest city on Halpha. Arai stated that the story will not be given away during the Closed Beta Test, and that players will have to wait for live to check it out.

Some of the combat classes and weapons that the Closed Beta Test in Japan will have access to was also listed as:

It was also shown that the range had an over the shoulder 3rd person target view, which acts as an action camera- giving the player more of a third-person-shooter style of gameplay. Parrying was also displayed during the Techer battle, which seems to be a major benefit to players that will be able to perform it properly. 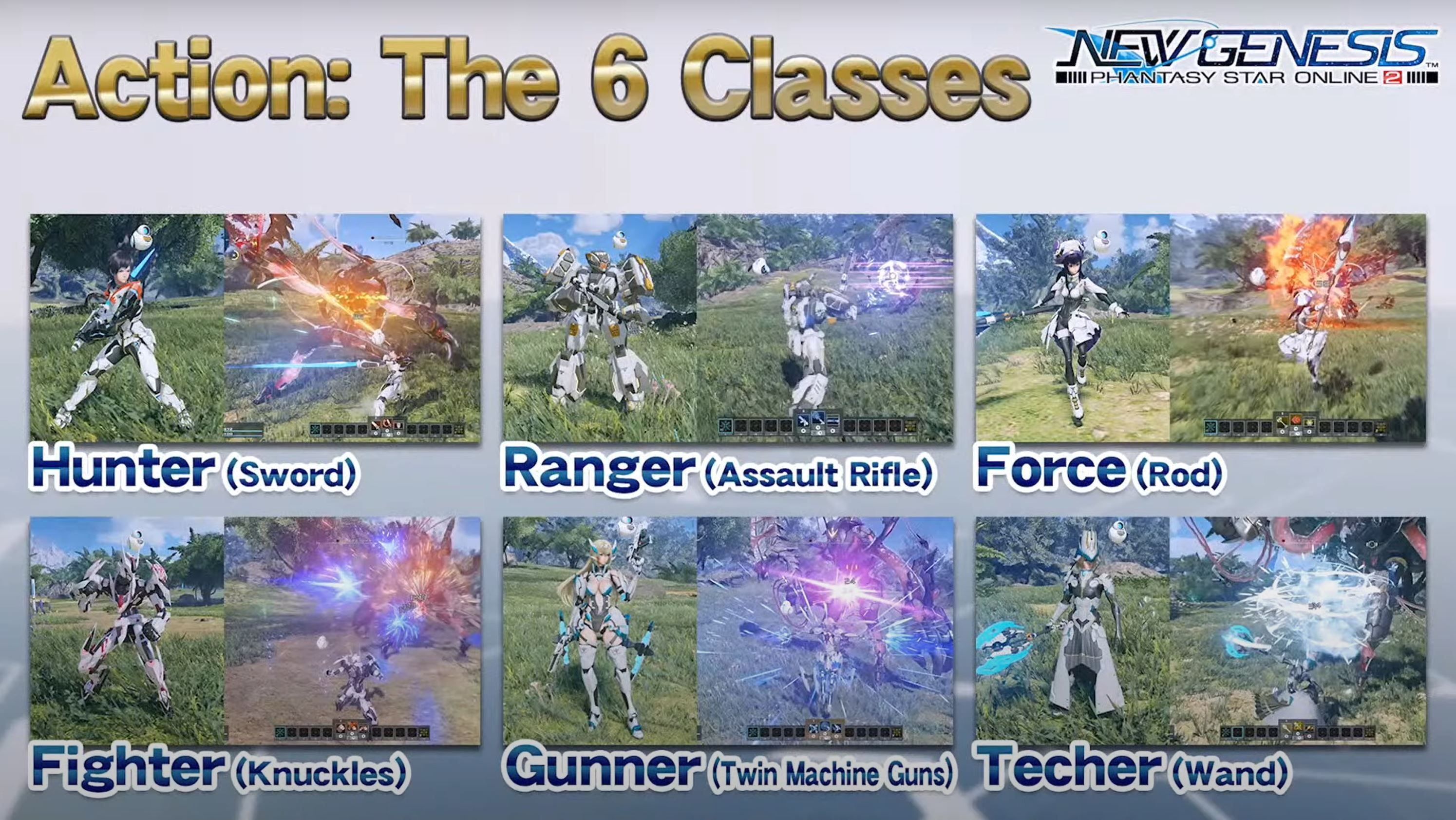 A new addition to classes is that players can use both main class and sub class weapons and photon arts/techniques at the same time with only a single hotbar. You can use as many available weapon abilities as the class has at one time.

Previously in PSO2 this was possible, but only if you could find a weapon that was usable by both the Main Class and Sub Class, and even in those situations, you were limited on what abilities you were able to use. This new system will give players a lot more diversity in the abilities they can use, and make it easier to create hybridized combos.

New traversal abilities were also shown and broken down as follows:

On the next segment, they talked about what the open field is. The open field is essentially a large open area where players can congregate, do quests, and run emergency missions as they encounter them. They mentioned that these areas are still (ship based) which means that players will likely only be playing with players on their ship (server).

Open worlds will have access to teleported to quickly get around the large open area called Ryuker devices which also act as storage for your character. Players can teleport to any open Ryuker Teleporter on their world map, from the map menu.  Players will also run into areas on the map that house Cocoons which are instanced quests that are only for the player and their group.

In the open field, quests and emergency trials will appear that will require multiple players from the open world loosely team up to defeat them. There are several types of emergency quests that will be available for players to participate in. Urgent Quests will also still be available, and will require players transport to a special instanced area of the map to complete them. 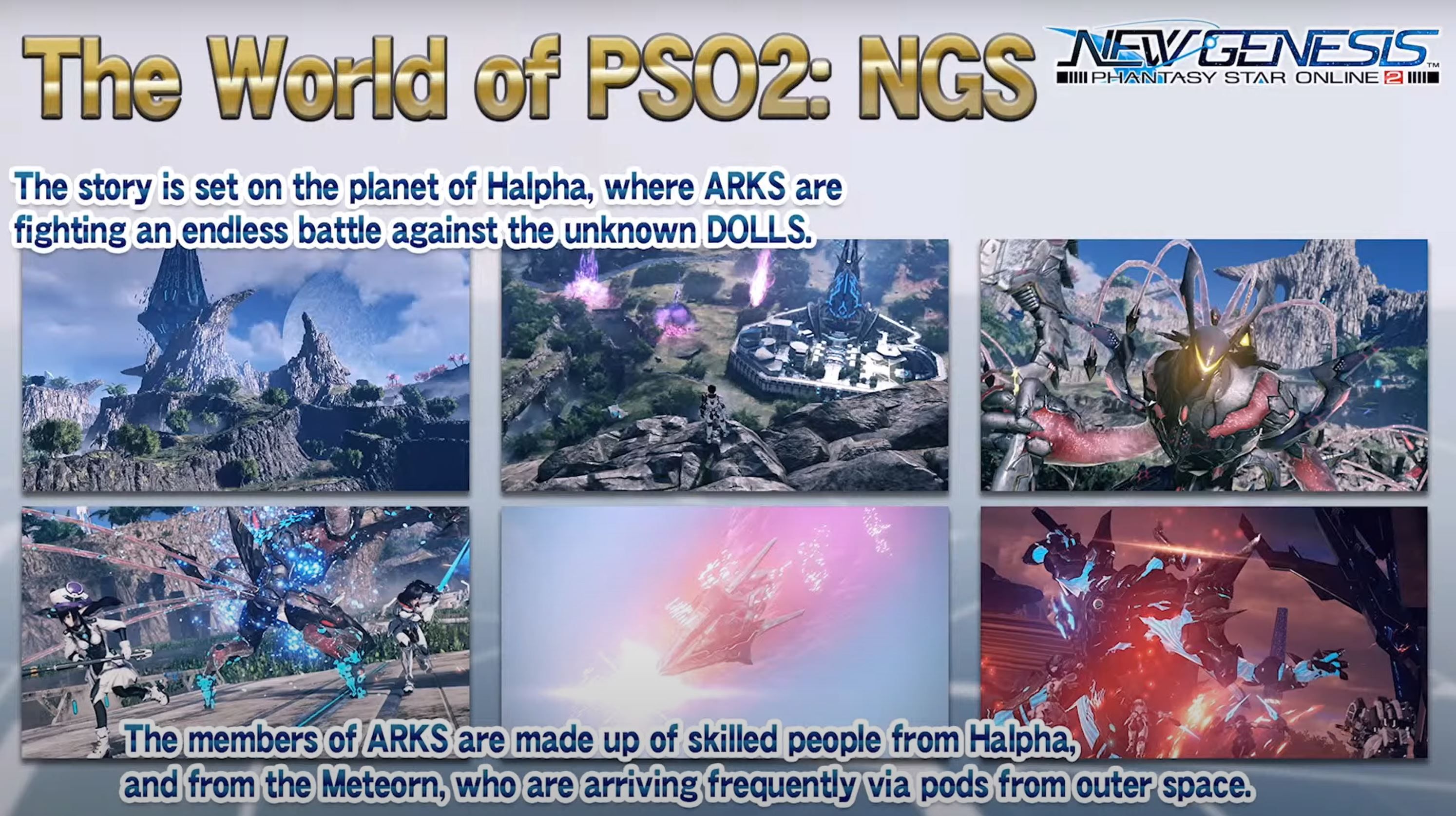 In the field players will also encounter Region Mags. These Mags grant players boosts when you feed it items. Lastly the PSE Burst system has returned. As your PSE gauge increases, and eventually overflows players will have the chance to encounter more rare enemies and get boosts in other ways, just as the PSE Burst does currently in PSO2.

Apart from the open world, Central City will act as a new hub rather than the Ship that players may be used to on PSO2. The lobby will house up to 100 players per instance. In terms of quests, shops and tasks, players can expect to pick them up from the main hub as they currently do – the systems are similar. Crafting and upgrading will also be accessible in Central City. The newest thing players may notice, is a crafting screen for multi-weapons. This will be necessary to craft a multi-weapon to utilize the new robust skill system.

In the next segment, communications were broken down to, basically, what people have expected from the series for decades. Symbol art and text balloons are returning, as they are staples of the PSO series, and have been around since the beginning. New emotes will be available complete with finger movements as the new graphical system provides enough detail to display them. Stamps are a newer function, where players can utilize predetermined, specialized PSO2 emojii style chat balloons.

For character creation, the biggest inclusion apart from the graphical changes and revamped detail sliders are the addition of asymmetrical options, such as two different eyebrows, or one eye open or closed. There was also an addition of action choices, such as character stances, or the way a character dashes. The options were limited in the prologue but they will likely be expanded on as the game launches, but mention of ticket item upgrades point to the possibility of purchasing new motions and stances during the live game.

The Japanese Closed Beta is set for late January to early February of 2021. Phantasy Star Online 2: New Genesis is planned for later in 2021 as well. Currently the global version of the game is slated only for Xbox and PC. The next Prologue for PSO2:NGS is set for after the first CBT wraps up, and when it happens, we’ll be there.