Grinding Gear Games just finished their Livestream reveal for Path of Exile’s next expansion, The Forbidden Sanctum, and it looks like Wraeclast will be getting a dose of roguelike for its next Challenge League.

During the stream, GGG co-founder Chris Wilson detailed the new challenges players will face as they attempt to clear each room of the ancient sanctum before covering all of the improvements and balance changes coming with the new expansion, including spicing things up with Ruthless, a new game mode meant to challenge even the most seasoned PoE veteran. Like all Path of Exile expansions, The Forbidden Sanctum is free for all players. It will release Friday, December 9, on PC, followed a few days later by the PlayStation and Xbox release on Wednesday, December 14.

The Forbidden Sanctum is an old Templar enclave rumored to be hidden beneath the Fellshrine Ruins. As you explore Wreaclast, each new area or map the player enters will give them a new chance to explore deeper into the Sanctum. Early in their playthrough, players can expect their character to be overwhelmed by the dangers they encounter, and only as their character grows in power will they be able to traverse the four floors of the Sanctum. Such is the way with roguelikes.

Similar to the maps of other roguelikes like Slay the Spire, players will be presented with multiple, interconnected paths through each floor of the Sanctum. Able to see the contents awaiting them a few rooms ahead of their current position, players can choose a path that weighs risk versus the rewards. 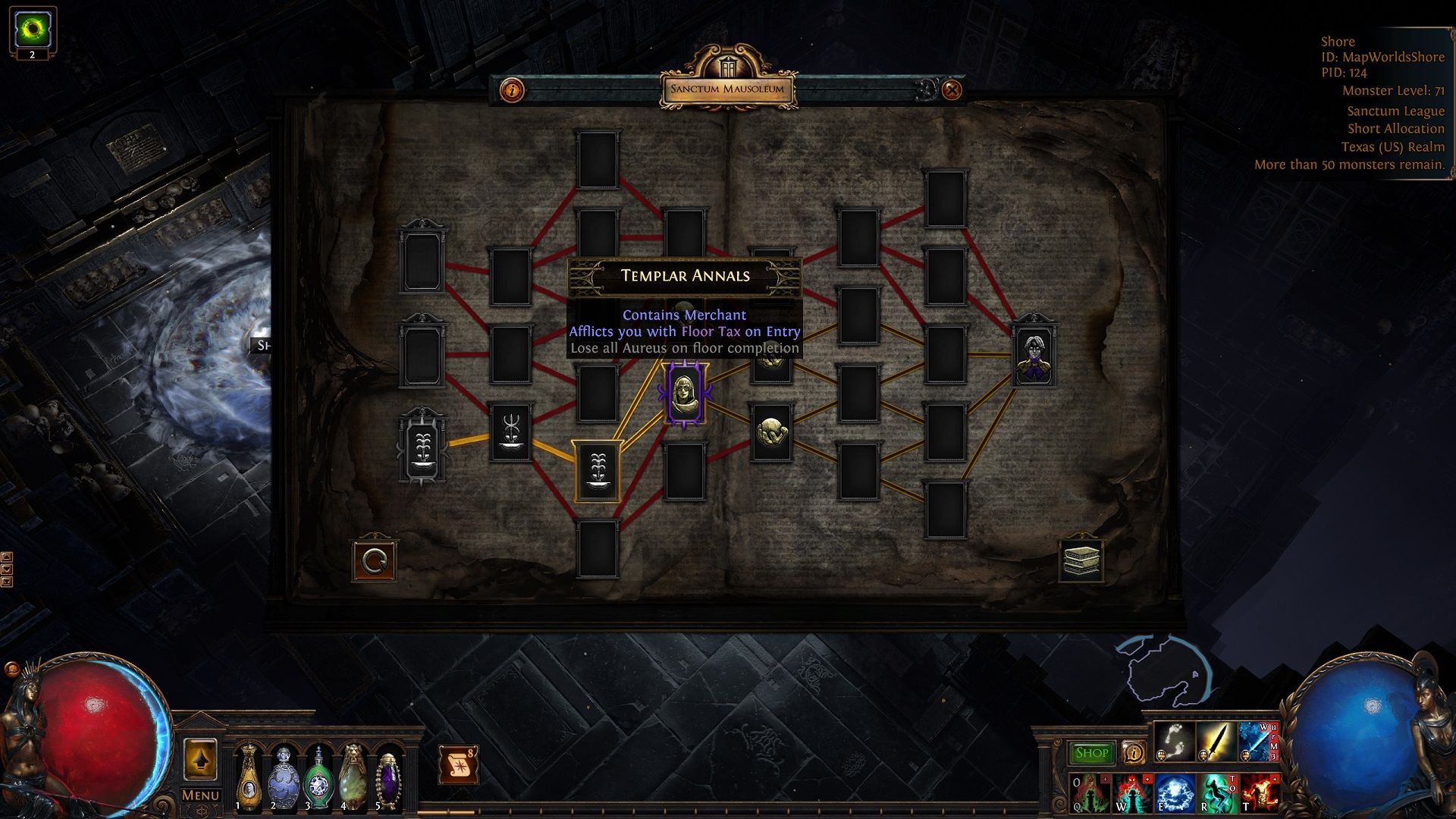 Starting with the risks, players will have to manage a new resource, Resolve, during Sanctum runs. Along with some nominal damage to your life, each hit from an enemy or environmental effect will reduce your Resolve. As an equalizer for all builds and archetypes, Resolve is not mitigated by your normal defenses such as armor, evasion, or block. The attacks are telegraphed, so your effective use of movement skills will be paramount to keeping your Resolve from hitting zero and ending your run. As an added kicker, your Resolve does not automatically replenish, and your current Resolve carries over from room to room.

As you progress through a Sanctum run, you will come across rooms that apply Afflictions to make the run more difficult. For example, Afflictions causing room rewards to become hidden was given as an example of a Minor Affliction. In contrast, Major Afflictions can be severe as entirely preventing the recovery of Resolve.

Opposite of Afflictions, beneficial Boons can be gained to aid your journey through the Sanctum. A Boon that slows monsters was one example of a common effect while preventing your character from receiving any more Minor Afflictions was considered a Major Boon.

Some rooms contain chests of Aureus, a Templar currency that will also drop in small amounts from slain enemies. These coins are left behind at the end of each Sanctum run but can be exchanged for Boons by visiting a room containing a merchant. You will also come across rooms that include a fountain that will restore a portion of your lost Resolve. There are also Afflicted Fountains that will restore a larger amount of Resolve but also carry the cost of a new Affliction. 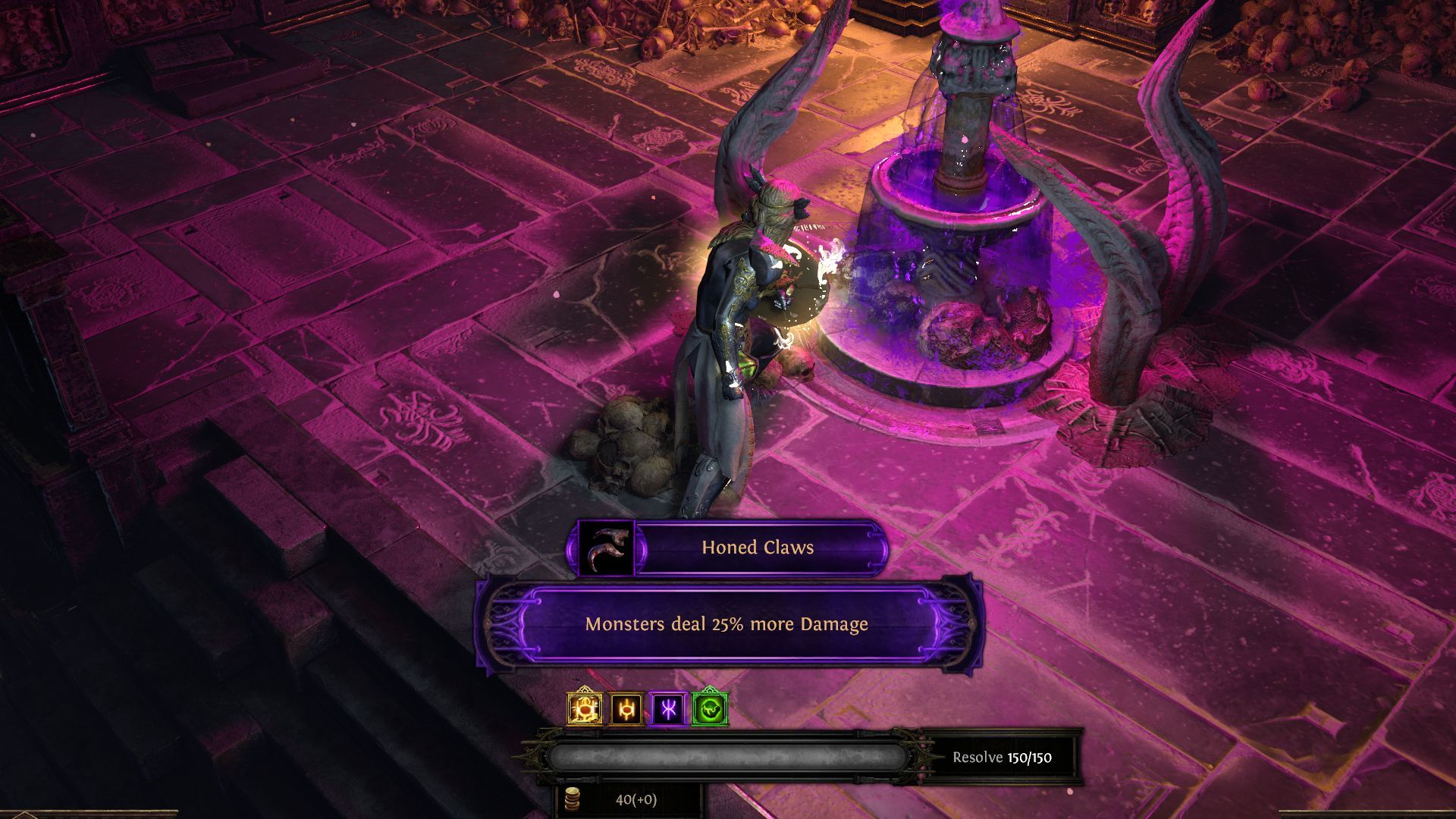 Balancing your list of boons and afflictions, choosing when to spend Aureus at a merchant, or foregoing a room with a reward to stop at a fountain to restore Resolve must all be considered when choosing your path through the Sanctum. Periodically, players will also be given the option to make an Accursed Pact during a Sanctum run. You’ll be given multiple Pacts to choose from, and you can take more than one at a time. Pacts always combine significant positive and negative effects, making them a big gamble that could just as easily end a run as extend it.

Although Aureus doesn’t carry over from run to run, not everything you find is lost when you exit the Sanctum. Many rooms will immediately reward a player with PoE currency items. Of course, roguelikes are all about risk, so these items can be gambled for more valuable rewards should you defeat the boss at the end of a floor.

Players will also acquire Templar Relics that persist throughout the league. During the Forbidden Sanctum storyline, players will discover a special altar upon which these relics can be placed. These relics directly affect your Sanctum runs and serve as a source of meta-progression for the league. Templar Relics cannot be traded or crafted, but players can store unused relics in the Relic Locker and swap them out to fine-tune their strategy from run to run. 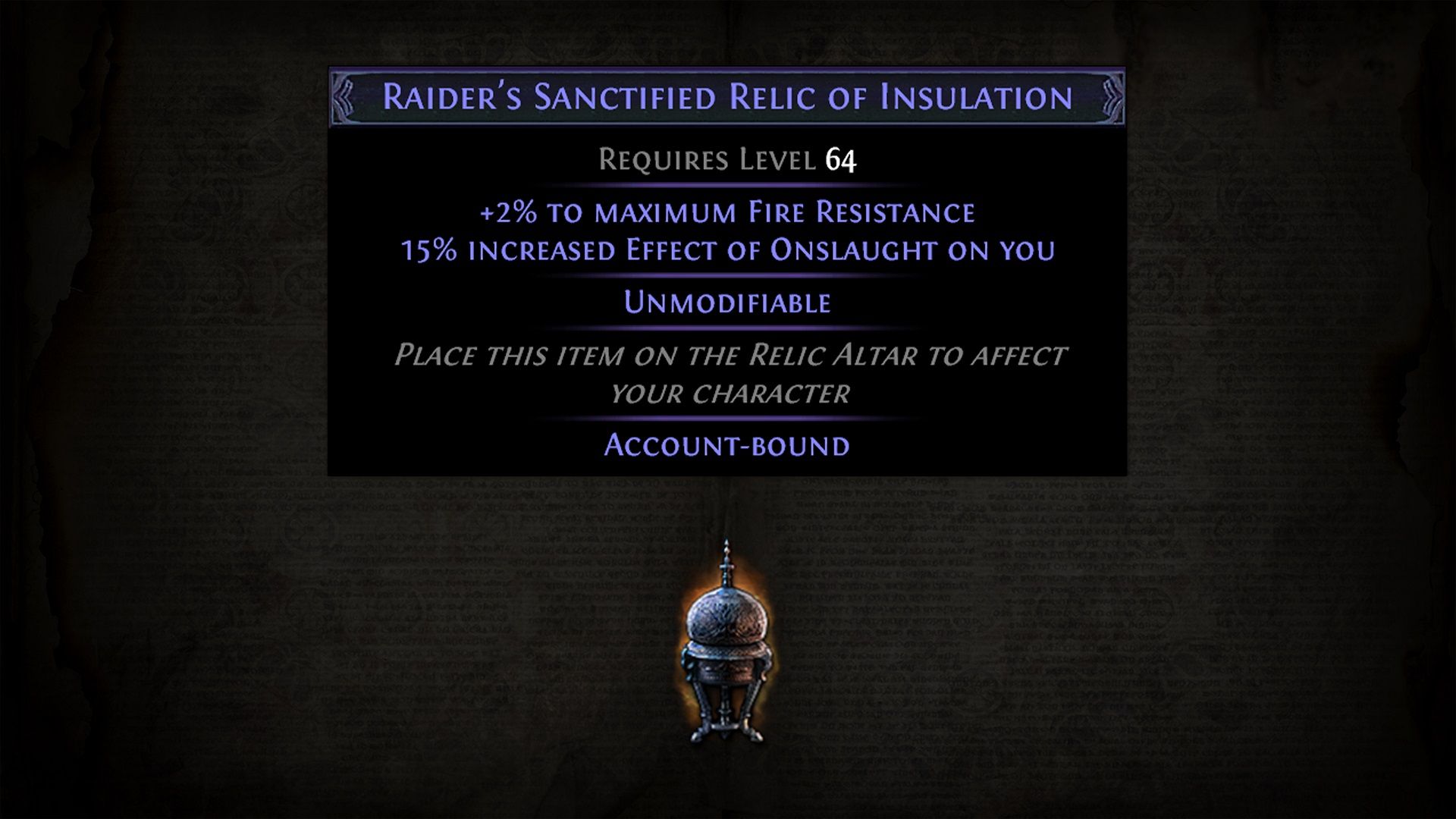 Traversing all the rooms on a single floor will be difficult, but doing so has its rewards. Defeating the boss at the end of a floor will reward players with a large amount of experience. And for players who master the intricacies of the Sanctum, the final boss can drop unique items from a pool exclusive to this league.

Along with the new Challenge League, the Forbidden Sanctum expansion will also add a new game mode. Intended to provide a more challenging experience, Ruthless is an additional character flag, like Hardcore and Solo Self-Found. To make the PoE experience more difficult, the focus of Ruthless Mode is reducing the character’s power, not buffing a monster’s health or making it deal more damage.

This isn’t done by directly manipulating a character’s stats or artificially reducing physical and elemental resistances. Instead, the power creep of character progression will be mitigated through item scarcity. Not only has the overall item drop rate been reduced, but the drop rate for magic, rare, and unique items has also been massively reduced. Crafting has also been limited, and rings, amulets, and belts cannot be purchased from vendors. Ruthless has several other restrictions, including limitations on skill and support gems, flask usage, and other underlying game mechanics. You can read this post for all of the changes being made.

Needless to say, Ruthless Mode will not be for everyone, but for anyone looking for a challenging way to play PoE, this could be just what the doctor ordered. Even though Ruthless has been in development for about a year and in Alpha testing for the last month, there are bound to be some unexpected consequences to the rule changes, so we can expect some mid-league changes as GGG continues to tweak everything.

A Path of Exile expansion wouldn’t be complete if it didn’t come with a pile of new skill gems and gear, and The Forbidden Sanctum has a fair amount of new goodies to collect. Although the complete list of new gems wasn’t revealed, two new attacks, Volcanic Fissure and Frozen Legion, were shown, along with two new Vaal melee skills, Vaal Flicker Strike and Vaal Cleave.

Volcanic Fissure is a new Slam skill for staves, maces, axes, and unarmed attacks, while Frozen Legion will appease the spell slingers. As you can guess by its name, Volcanic Fissure is a fire-based attack. With each use, your character slams the ground, creating a fiery chasm that snakes toward your target before it erupts into a burst of projectiles that explodes upon striking the ground. 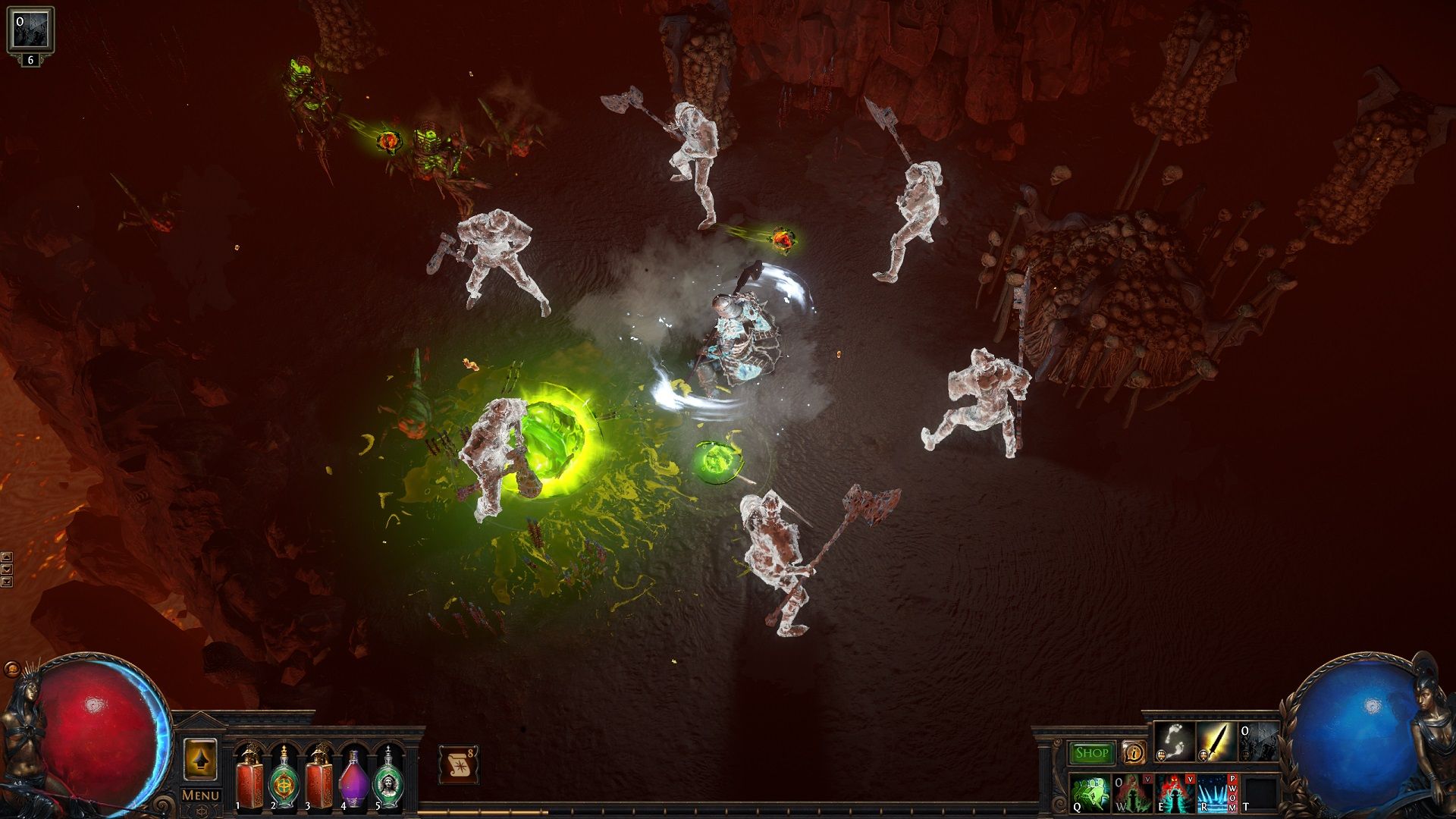 Frozen Legion summons a ring of icy statues around your character, one for each cooldown stack available. Each figure then uses a copy of your weapon (staff, mace, or axe) to perform a sweeping ice slash, hitting all enemies within range.

Including the Sanctum-exclusive uniques, a total of 15 new unique items are being added in this expansion, some of which were designed by previous leagues’ boss-kill race winners. We saw Progenesis, a unique amethyst flask that grants a mini version of the petrified blood effect. Also on display was a unique jewel, Rational Doctrine, which gives you either permanent consecrated ground or profane ground depending on whether you have specced higher into Strength or Intelligence. The final item shown was Entropic Devastation, a pair of unique gloves that apply impale on all of your spell crits.

Grinding Gear Games also uses The Forbidden Sanctum expansion to make endgame improvements. The Atlas Tree is receiving a significant overhaul, with all boss bonuses being removed and baked into the base properties of the boss fights. This is being done to give endgame mapping a more even flow and allow you to specialize for content encountered on every map.

Eldritch Altars are also getting a rework that affects their rewards. For example, instead of Map Bosses dropping random rewards, specific types of currency will be listed in the reward descriptions, and some of the lower-value and more common currency rewards will be deleted from the reward pools.

A balance pass has also been made on unique weapons, and ten underused uniques are being buffed to the same rarity as Mageblood and Headhunter. In doing so, the items will receive a major buff while at the same time making them extremely hard to acquire.