EVE Online has a player base that, probably more than most, keeps an active track of its concurrent player count. In an MMO where players are the content, it's rather important to have people to fly with, so it's no wonder the community is celebrating the highest peak concurrent player count in at least a year.

The surge in concurrent players comes after EVE Online's latest expansion (and first real major expansion in years), Uprising, released to much acclaim by the fanbase. With sweeping changes to faction warfare, as well as tweaks to the bounty payouts for killing NPCs, a host of new ships and more, Uprising has been received rather positively by the EVE community, especially after months of anticipation coming off the heels of EVE Fanfest 2022.

However, one concern for EVE Online throughout the years has been a seemingly dwindling player count, though renewed efforts by CCP Games to revamp the starting experience has shown some growth. 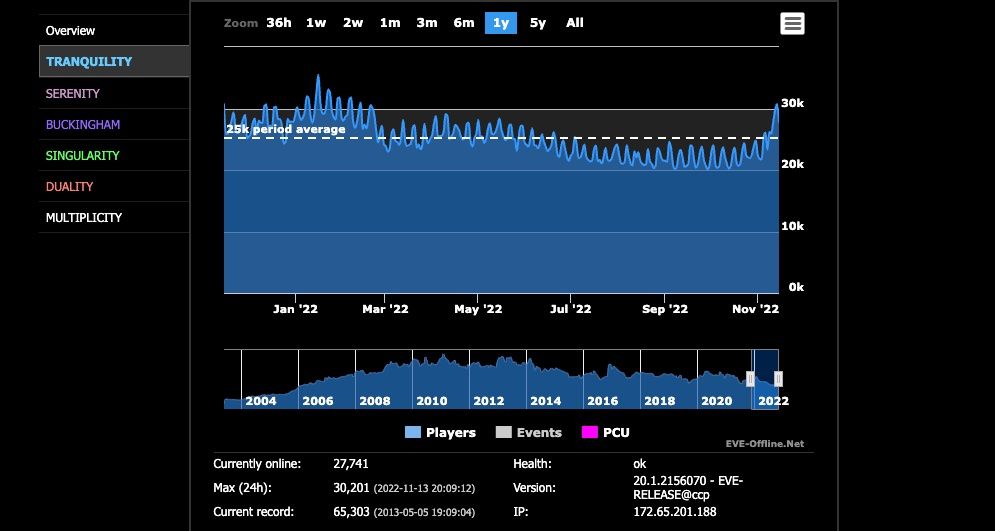 Uprising has seen the player count peak over 30K concurrent players for the first time in over a year, according to EVE Online Status Monitor, a site dedicated to tracking the PCU count reported by EVE's own launcher. A number of factors have likely played into this, not simply the new expansion, but also the two weeks of free Omega time and a massive pile of skill points to earn as bonuses for playing.

However, whatever the reason, the EVE community is seemingly celebrating the milestone as player count directly impacts gameplay. Having fewer players to shoot in space makes New Eden rather lonely. Even CCP is celebrating, with  CEO Hilmar Veigar Petursson stating on Twitter that this past weekend saw the 2nd highest November daily active user account for the past 6 years, being beaten only by 2020.

Redditors have been discussing whether or not CCP Games can sustain this, especially after the new expansion's associated incentives wear off. Players are hoping that the free Omega time wearing off won't see a significant decrease in players jumping in, instead looking to see if the features alone are enough to keep the momentum going.

While the PCU doesn't tell the whole story of the number of active players logging in monthly for EVE Online, it's a good indicator of the population's health at a glance. It also doesn't necessarily account for the many EVE players who multi-box, but in my experience, since EVE Uprising launched, I've seen way more players actually engaging in content outside of a station than simply spamming chat in Jita.

EVE Online's Uprising expansion launched last week, bringing massive changes to faction warfare, changing fundamentally how the wars between its NPC alliances are fought. With a new narrative arc and in-game events, EVE Online feels poised to close out 2022 with a bang rather than a Rorqual-dying whimper.