Whenever an upcoming MMORPG has a beta event, there’s no doubt a flurry of comparisons to existing MMOs will follow. Elyon's recent closed beta test is no exception. Developer Bluehole isn't new to the MMO genre, so it's no surprise that parallels are being drawn between Elyon and their decade-old action combat MMO, Tera.

Ten years is a long time, and although much has changed in the general gaming scene, there hasn't been much advancement in the MMO scene. I jumped back into Tera a few months back, and that experience was fresh in my mind as I entered Elyon’s beta. So the real question I needed answered is whether Elyon is just a reskinned Tera cash grab or if there is enough difference between the two games to get me to buy into Elyon's full release later this year?

As far as the actual skin, Bluehole’s use of Unreal Engine 3 for Elyon didn’t give me much hope that the graphics would show any significant improvement over what we already have with Tera. Fortunately, in character creation at least, there is a noticeable difference between Tera and Elyon. Tera uses a lot of presets with the ability to make some minor tweaks. Although Elyon follows suit with presets, the customization tools are more robust. And with an extra decade of use with the Unreal Engine, there is a noticeable difference in the level of detail provided. In the image below, you can easily see the increased detail in the Elyon Orc on the left, especially in hair and skin quality. 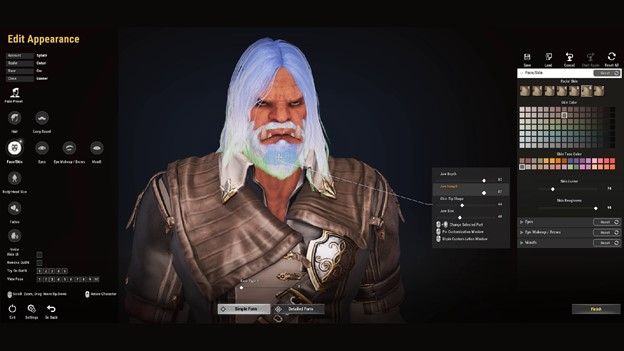 That doesn’t mean there isn’t any difference in the characters, though. Seeing as how Elyon takes place in a completely different setting, the Amani, Baraka, Castanic, and Elin have been cut with only an Orc race being added. The Popori get a little better treatment by being transformed into the Ein, a multi-species animal race. This leaves Elyon with a more traditional high fantasy cast of Human, Elf, and Orc, with the Ein thrown in because, well, furries.

This shortened list of playable races is echoed by a reduction of classes available during the beta test. Warlord, Elementalist, Mystic, Gunner, and Assassin were available during the beta, with the Slayer from the Korean version excluded. This is a far cry from the thirteen classes found in Tera, but I see this as a good sign. This smaller scope should lead to fewer bugs and more detailed animations before Elyon finally releases, not to mention a much more manageable group of classes to balance across both PVE and PVP content.

Bluehole has also offset the smaller class and race lists by removing gender and race-specific classes. I for one, would rather be able to play every class with my chosen race and gender over being pushed into a combination that I don’t connect with. It’s the long-term connection a player builds with their in-game avatar that keeps them invested in grinding through end-game progression systems, not the option to create another character with some slight variant to gameplay than what they already have.

The switch to a smaller roster has also brought with it a revamp of the skill system. Upon first glance, Elyon’s character skills look just like what you would find in Tera. Each class brings its own playstyle to the field, with around 20-25 skills to learn as you level up. Like Tera, each of these skills can be modified by spending skill points to add different effects. That’s where the similarities end. 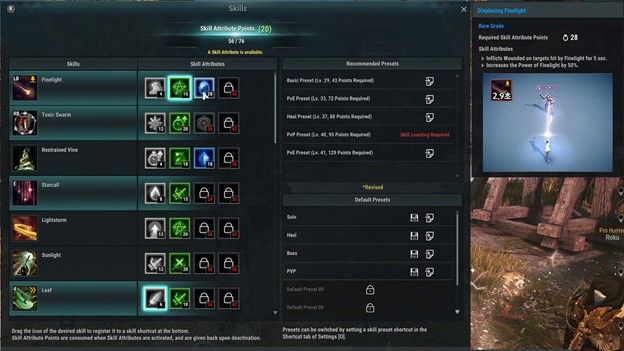 The skill system in Elyon may look similar to Tera’s, but it is very different.

In Tera, each skill could be modified by spending glyph points to activate one or more glyphs on a skill, allowing you to pick and choose minor buffs like increased range, additional targets, or the like. You also have crystals that can be added to a limited number of offensive and defensive slots to buff your gear attributes further.

Elyon’s skill screen may look similar to Tera’s, but the mechanics behind skill points have been completely revamped. Each skill can only be modified by one of four upgrades, but each upgrade significantly impacts a skill’s use. Some major effects like changing a single target skill into an area of effect or damage over time skill or switching a damage skill to a healing skill can completely change your character’s play style.

The Crystals of Tera have also been updated, with Elyon renaming them to Runestones. Runestones are how you acquire skill points and are slotted directly into your gear, with higher quality gear able to equip more stones. The stones themselves can also be upgraded, with higher tiers granting more skill points. Runestones come in six colors - red for assault, orange for control, yellow for fate, green for support, blue for protection, and purple for awakening. There’s also a white runestone that is neutral and can be added to any color slot.

As your Runestones pile up, they also unlock Rune Attributes, which work similarly to how Tera’s crystals worked. Each color gets its own set of attributes, and at different levels, you can pick from multiple attributes to add to your character. The result is still the same, but this new system simplifies the task of acquiring and upgrading stones to unlock higher-level attributes, as well as giving the flexibility of switching attributes without having to swap out your Runestones for each setup. 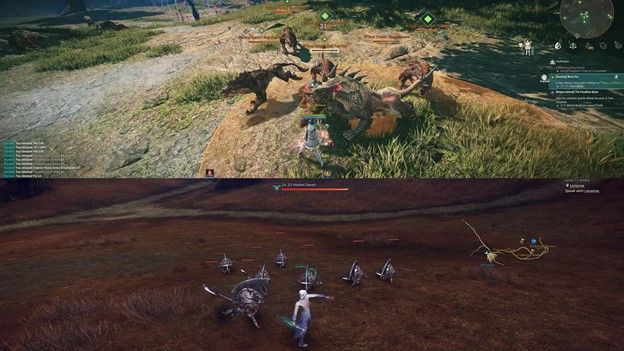 The same tinkering and minor upgrades found in character creation and progression carry over into Elyon’s overall visuals. Again, there is a higher level of detail when compared to Tera, but it’s not a jaw-dropping difference. Outposts and towns seem to have received a lot of attention. The improved textures applied to wood and stone assets give buildings more depth. And the higher density of objects in the scenery helps the world feel alive and lived-in. The same can be said for the ground textures and plentiful foliage in the wilderness.

Given the minor upgrade to graphics between Tera and Elyon, I wonder why Bluehole didn’t make the switch from Unreal 3 to the Unreal 4 engine? The major jump in graphics quality they could have achieved by switching to UE4 would go a long way in squashing concerns about a cash grab, not to mention visually extending the lifespan of Elyon after launch. 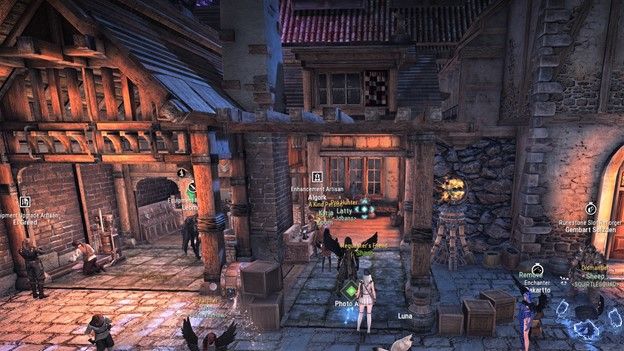 While I found all of the changes mentioned above an improvement from Tera to Elyon, they are just updates to an old system rather than a game-changing overhaul. That game-changer comes with the handling of your character’s skill loadout. Even though Tera is an action combat MMO, it still uses the classical MMO style of multiple hotbars filled with every skill your character possesses.

On the other hand, Elyon has fully embraced a more modern action combat adaptation where you have a single skill bar with a limited skill set. This completely changes the pace and feel of combat in Elyon and really emphasizes how you spend your skill points. You have to decide which tools you want to carry into battle. The limited number of skills also allows you to focus a little more on situational combat, like lining up the perfect shot or dodging the telegraphed attacks of a boss. Fortunately, you can save multiple load-outs to allow for quick changes to your skillset when a new challenge awaits, like switching from an AOE set for dungeon clearing to a single target loadout when you are headed into a boss battle. 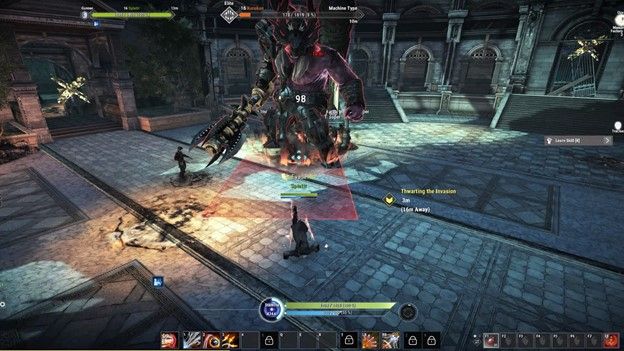 Everything from the enhanced character creation to the slightly improved graphics made me feel like Elyon was a step above what Tera has to offer. Yeah, the story and voice acting were bland at best (check out Kevin’s take on Elyon’s story), but the reworked character classes and skills more than made up for it. Whereas Tera throws upgraded skill after upgrades skill at you, the skill variants in Elyon can completely change the framework of a character and open up multiple playstyles without ever having to switch to a different class.

More than anything, combat with all of the classes I tried was solid and fun. While solo questing was the same ol’ same ol’, there was a decent pace to level progression and skill advancement. Group play had a lot to offer, and I thoroughly enjoyed the mix of PvE dungeons and PvP content Elyon offers. 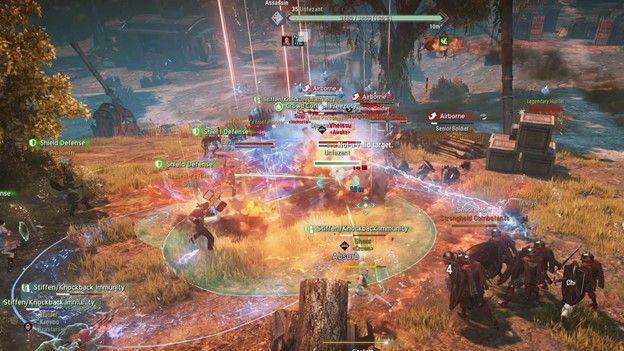 To answer my original question, Elyon isn’t just a reskin of Tera. It's a rehash of every action MMO ever made. There isn’t anything to make it stand out, nothing new to give it a leg up. Yet, it still drew me in during the beta weekend. I saw enough to know that I will be there chomping at the bit on release day like I have so many other MMOs in the past. Will I still feel that same excitement 60 or 90 days after release? That’s the new question that needs answering.