In a recent reddit post, players have stolen a marketplace in Dual Universe. No, not just the items in the marketplace, but the entirety of the marketplace as a whole. The development team has responded in several ways, but to much of the dismay of the players, they have also banned the players involved.

Yes, you read that right, the great Marketplace Heist was an actual theft of the marketplace. In the reddit, the players responsible have posted how they did it, but within just a few days, the developers responded with a ban, as well as a response on their forums:

“By now, some of you may be aware that unlucky number Market 15 has been stripped bare and left to create ugly memes for generations to come. We’re trying to look at this in good humour as, from the front, it appears to be an issue that was created when we moved the markets, making it editable by players. It doesn’t take a rocket scientist (though we know there are a few of you out there) to understand that the markets are not a community construction, and as such not intended to be handled by players on this level. The destruction of the build isn’t a quick fix, and was clearly done knowing it shouldn't be.

Let us be clear, we will not tolerate this kind of behaviour during any phase of the development of Dual Universe.

The players responsible for the destruction of the market have been permanently banned from Dual Universe, and all salvaged materials and assets gained will be removed without compensation.”

However, the conversation between the developers and those responsible didn’t simply stop at the forum post, the team was active within the reddit post as well: 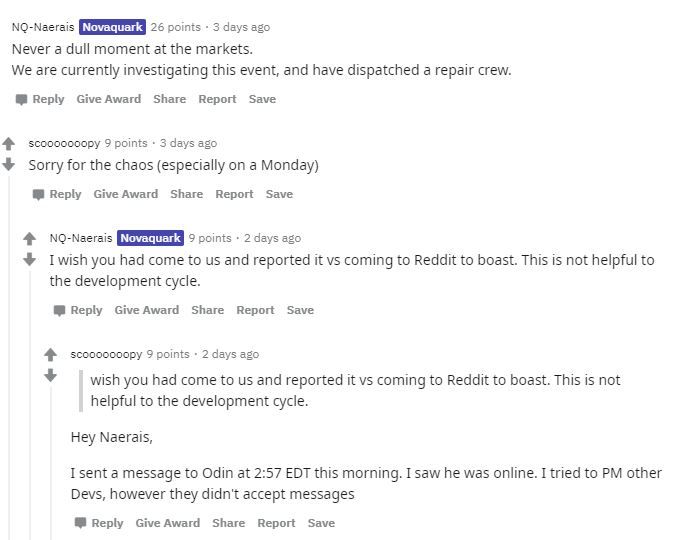 Many in the community feel as though the players should not be punished, especially as they did attempt to reach out to the developers. Do you believe the developers were right in their ban of these players, or is this something that should be forgotten yet learned from? Recently we posted about a huge player made Expo in Dual Universe, along with some of our Open Beta Impressions, that may be worth the read if you’re interested in what stat the game is in currently.