Now that the Dragonflight expansion has been out for almost a month, the World of Warcraft team has some details about what to expect in a new roadmap from Executive Producer Holly Longdale.

“A WoW expansion is not a single moment in time but a journey —we know that the merit of an expansion hinges on the sustained quality of its entire arc,” the update reads. Now, we know more of what that journey might look like. 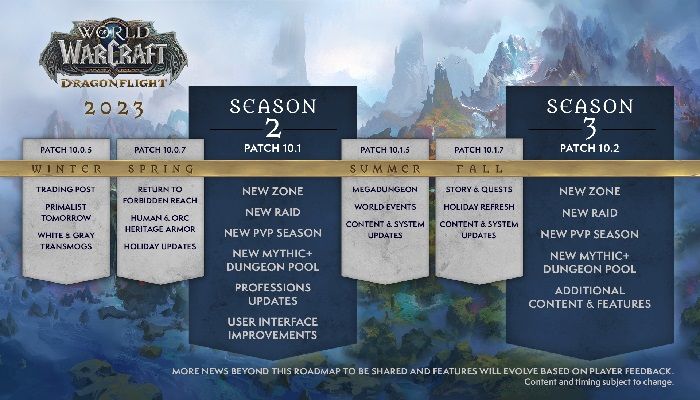 Update 10.0.5 is set for release early next year. This update is currently on the PTR, where you can test out the new Trading Post system. The Trading Post will let everyone complete tasks off of a themed list every month for a rotating series of new, free cosmetics. Also included in this update will be the Primalist Tomorrow area.

Later, the 10.0.7 update will be a robust one for content: “As the dracthyr return to their place of confinement (along with some unexpected guests) to learn more about their origins and their destiny. This content will set up the next major chapter of Dragonflight, and by its conclusion, it should be obvious what our next destination must be”.

There’s a graphic released with an overview of what to expect from the in-between updates, butLongdale also emphasizes that the team does have some surprises planned so they're not giving much away about these updates.

Still, there’s a big overview of how things will work if you’re on board with Dragonflight already or plan to be soon.

Read the full update at World of Warcraft.