The latest quarterly developer for Diablo IV was just posted, showing off one of the five regions of Sanctuary: The Dry Steppes.

In the most recent developer update, the developers for Diablo IV cover a wide range of topics from Storytelling and Cinematics to Items and Progression. Most notably, they unveiled more information about The Dry Steppes, one of the five regions in Sanctuary. True to its name, The Dry Steppes appear like a desert-plains or wasteland region within Sanctuary; there are dusty dirt roads and craggly rocks, with dried flora all over as if it was part of a tallgrass prarie.

In discussing the Open World, "If you want to take a break from the main campaign and go exploring, crafting, or PvPing, you are free to do so," meaning that players can choose to go after the main story, side quests, or get lost in all of the side activities seemingly available. This sounds like a completely different take on previous Diablo installments - and most other ARPGs - where almost everything was presented linearly. "We think the ability to approach the game with a different mix of story and side content tailored to your own appetite will make playing (and re-playing) the campaign more enjoyable than it has been in previous ARPGs." 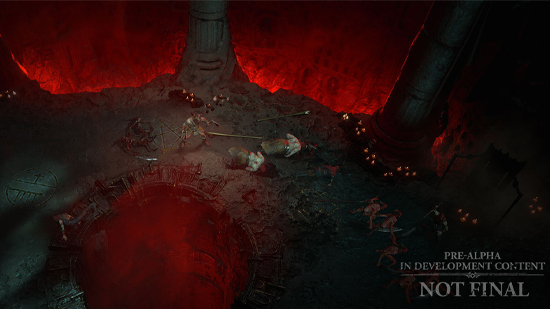 To help explore the open world of Sanctuary, players will also be able to acquire mounts. "We really liked how the open world interacts with mounts—you could get to your objectives more quickly without trivializing travel or combat. Itemization for mounts also opened up a new axis of progression." There are also trophies that players can attach to the saddle which will show off achievements to other players.

The team also mentions how the current Multiplayer approach to Diablo IV is progressing. Right now, there is a social experience similar to Destiny 2 in place, where players will mostly play solo. Dungeons and key story moments are instanced, but while on the road players can occasionally run in to eachother. During world events, there will be a larger amount of players - but players will never be forced to join a party. "Solo players can walk in, help complete the event, and claim a reward. We think this seamless approach to multiplayer is working well and look forward to sharing more about this approach with you."

You can read the full developer update via the link above. In other Blizzard-related news, you can read about the World of Warcraft's upcoming livestream about Shadowlands coming July 8. You can also read about Blizzard's recent statement about Black Lives Matter from Blizzard's President J. Allen Brack.