After spending time on the promised debut of Cyberpunk 2077 on current generation platforms, CD Projekt Red has announced via stream and on Twitter that jump to PlayStation 5 and Xbox Series X|S in a brand new patch out today. That update not only brings the game to current consoles, it comes with a number of fixes, improvements, and multiple new free DLCs to sweeten the deal.

When it comes to landing on current-gen consoles, there are some changes like the addition of ray-tracing to shadows, new graphics modes for the consoles, and native achievement support. Naturally, there’s support for 4K scaling and a promised 60fps (except for Xbox Series S, which has its own default setting). There are various improvements to visuals, performance, rendering, and support for spatial audio on PS5 and even Spanish voiceover for the Americas. 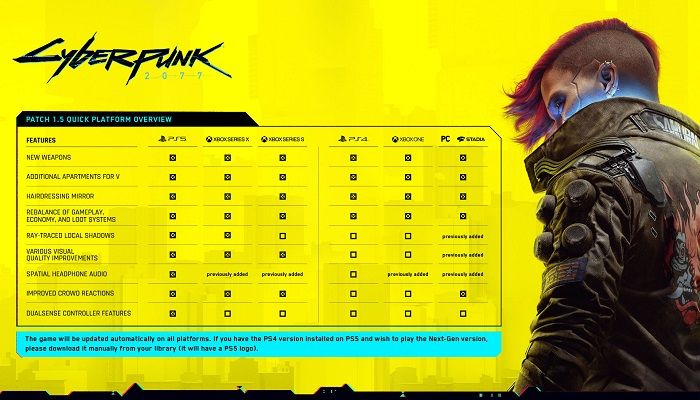 Players on all platforms can enjoy the new content and additions. These include the introduction of apartments. You can customize V’s starter apartment and even rent apartments when you find them in Night City. All of the available apartments are open to you if you pay the one-time fees for each. They’re not just places to hide out or sleep, as there are buffs you can get for doing things in apartments. Sleep, get the Rested status and you’ll get +20% skill XP. Brew some coffee and get Energized status for an hour. Take a shower and get the Refreshed status, which lets you regenerate health during combat, up to 60% of max. There are others to help you too. Another new advantage of apartments (and hideouts) is the ability to change up your appearance by using a mirror while inside.

Improvements cover all aspects of the game, with a rebalancing of gameplay, the economy, perks, and rewards. You should see better loot and difficulty tweaks. The AI also gets some upgrades and changes to make things feel more alive, like in crowd reactions.

The patch notes are extensive and even these, CDPR says, don’t even cover everything. They seem to have heard all of the feedback as they both  get the game on current platforms and solidify the entire foundation and gameplay experience.