In the latest update from the Class Action for Chronicles of Elyria Discord, the court has ruled that in order to get to Xsolla, the payment processor that took payments outside of the Kickstarter Campaign, and refused to provide refunds, the Soulbound Studios class action lawsuit must first conclude.

The Class Action Discord’s latest announcement provided some details related to their overall strategy, as hundreds of backers of Chronicles of Elyria attempt to have their money returned to them. Back in July, it was reported that the case had been transferred to the western district of Washington. The central district court of California granted Xsolla’s motion to compel arbitration, essentially putting the claims of the case to task to settle the dispute. However, the court will stay arbitration until the Soulbound Studios class action lawsuit has concluded, which will then clear the way for the settlement of the dispute with Xsolla.

This has also led to the potential of a requirement for more legal fees headed to those that want to continue the fight. By September 10th, a fee agreement should be posted for backers that want to push pressure on Xsolla through the possible influx of “hundreds of cases to arbitrate”.  On the opposite end of the spectrum, Chronicles of Elyria developer Jeromy Walsh has continued development of Kingdoms of Elyria, an offshoot standalone management sim title that was meant as a precursor to Chronicles of Elyria. 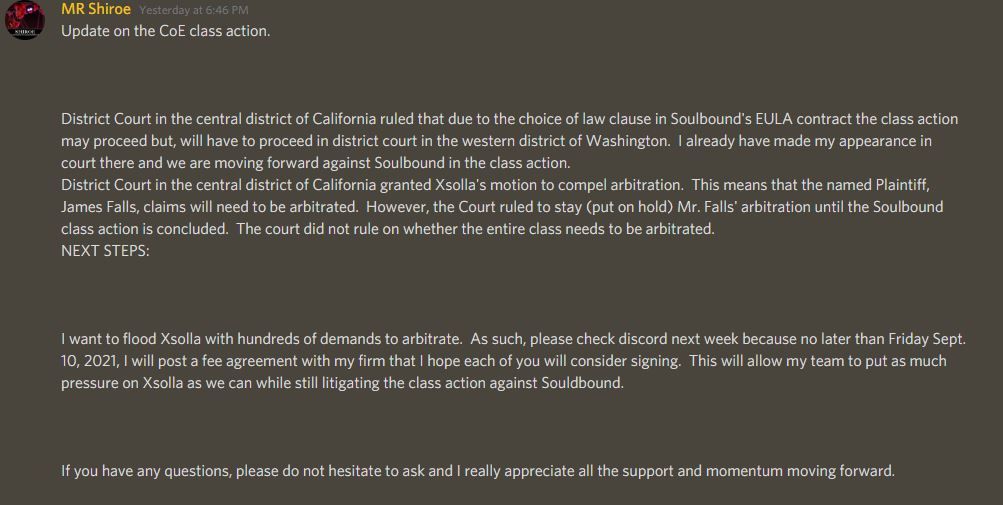 In a wacky turn of events in July, Walsh made changes to the Kingdoms of Elyria NDA so that potential players and original backers of the game would be more at ease in trying the Alpha, by removing verbiage related to giving up their rights related to the ongoing legal claim. This change came amidst another of Walsh’s ideas to issue digital certificates allowing ownership for virtual goods, including titles and items, by making them NFT’s. It does seem a little too early to tell what the master plan is for the ongoing development of KoE/CoE, or whether some of these changes are a further effort to limit culpability in the upcoming lawsuit.