If you’re looking to play Fallout 76, DOOM Eternal, Wolfenstein: Youngblood, or any other games that currently use the Bethesda launcher, starting in April, you’ll be able to migrate those games on PC to Steam. Bethesda has chosen to sunset its own launcher, and you’ll need to complete migration by May in order to keep playing those games. Fallout 76 has its own specific situation regarding the transition.

For all of the games that currently rely on the Bethesda launcher, friends lists and all items and progression are set to transfer over, along with any currencies. If you’re a Fallout 76 player, Bethesda is reassuring everyone that the process is being done with precautions to move everything over and keep data intact. This means your characters, progression, Atoms, cosmetic items, friends list, and other vital information are going with you as Bethesda ends its own launcher and transitions its games over to Steam.

There’s also a new 2022 roadmap for Fallout 76, so you can expect these events through the year, including after the launcher change. For spring, there is Invaders From Beyond, where Appalachia is at the center of an otherworldly invasion. It comes with new public events and an update to Fallout Worlds. Summer will bring Test Your Metal, which brings a series of public events intended to test you. Fall will bring Expeditions: the Pitt, which will introduce missions and rewards. Finally, winter will bring you the Nuka-World on Tour, with events and more. 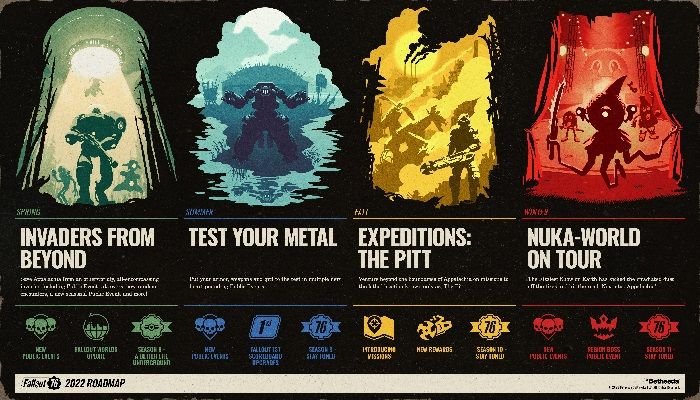 Fallout 76 will, after the migration to Steam, have its playtesting on the Public Test Server only available on PC through Steam. Other platforms won’t get support for a PTS. Another specific change for players concerns the Fallout 1st membership options. These memberships will continue to be available and grant the same in-game benefits. If you have time remaining on your membership after migrating to Steam, however, you’ll get all of the remaining Atoms you’re due in the rest of your membership immediately since after April these memberships won’t automatically renew. If you want to continue being a Fallout 1st member, you’ll have to renew your membership on Steam.

For more on the Steam transition as it relates to Fallout 76, see this official FAQ.