Blizzard's monthly active users held quarter over quarter at 26 million users based on numbers shared during today's Activision Blizzard earnings call. Additionally, it was reported that Blizzard's revenue grew 20% year-over-year, thanks in no small part to its release of Diablo II: Resurrected in September. However, it looks like the next installments of Overwatch  and Diablo won't release until at least 2023.

Blizzard's MAU count has been under scrutiny since each earnings report has, more or less, shown a drop in engagement with each successive earnings call. Earlier this year it was reported that between Q1 2018 and Q1 2021, Blizzard had lost 29% of its monthly active users, and another million in Q2, seeing MAUs drop to 26 million. Q3 looks stabilized, as today's earnings call reported 26 million MAUs in the quarter as well. It should be noted that this represents users across all Blizzard properties and not World of Warcraft subscribers, specifically. 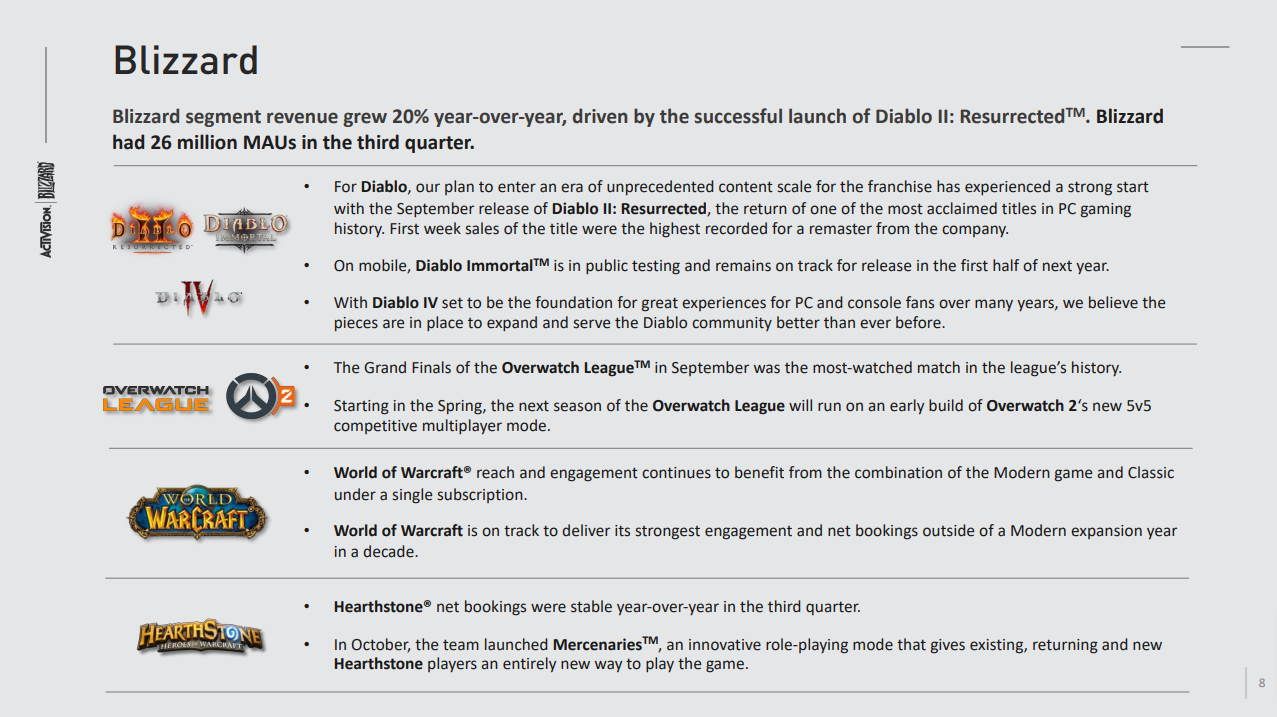 Speaking of WoW subs, though, the company stated on the call that Warcraft subscriptions are higher than average during this time period after a modern expansion release, which could be due in part to the fact that Classic and Modern WoW share a subscription, as well as anticipation of Shadowlands' 9.1.5 update.

Diablo II: Resurrected spurred on growth as well with its release in September, according to Activision Blizzard, stating that first week sales were the "highest recorded for a remaster from the company." However, the earnings call did mention delays to upcoming anticipated Blizzard titles. Blizzard is reporting 20% growth in revenue year-over-year this quarter, despite the current ongoing lawsuit alleging workplace discrimination and sexual harassment facing the company. Activision Blizzard notes that since the lawsuit was filed, the company has terminated over 20 employees, some in key leadership roles, and is implementing what it calls a zero-tolerance policy towards any harassment moving forward, as well as waiving forced arbitration of sexual harassment and discrimination claims in the future. 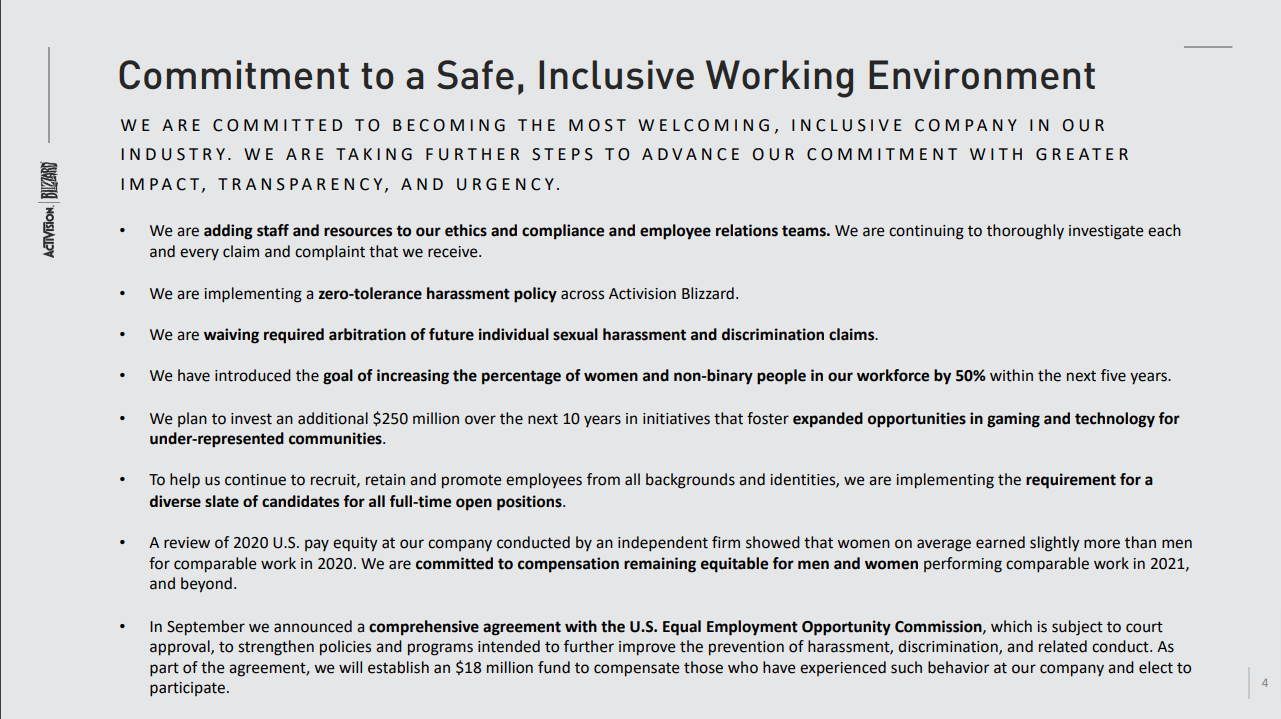 Both Overwatch 2 and Diablo IV are being delayed into 2023, according to the earnings call today. The reasons given were partially due to the Covid-19 pandemic forcing a change in how the company works, as well as the loss of leadership in both areas, according to new sole-leader of Blizzard, Mike Ybarra (co-leader Jen Oneal stepped down today as we reported earlier). Activision Blizzard states that they are still planning a "substantial amount of content" from Blizzard in 2021, but that the two games in question would benefit from more time. Despite the delay, Blizzard confirmed today that an early build of Overwatch 2's 5v5 competitive mode would be used in the Overwatch Leage starting next Spring. 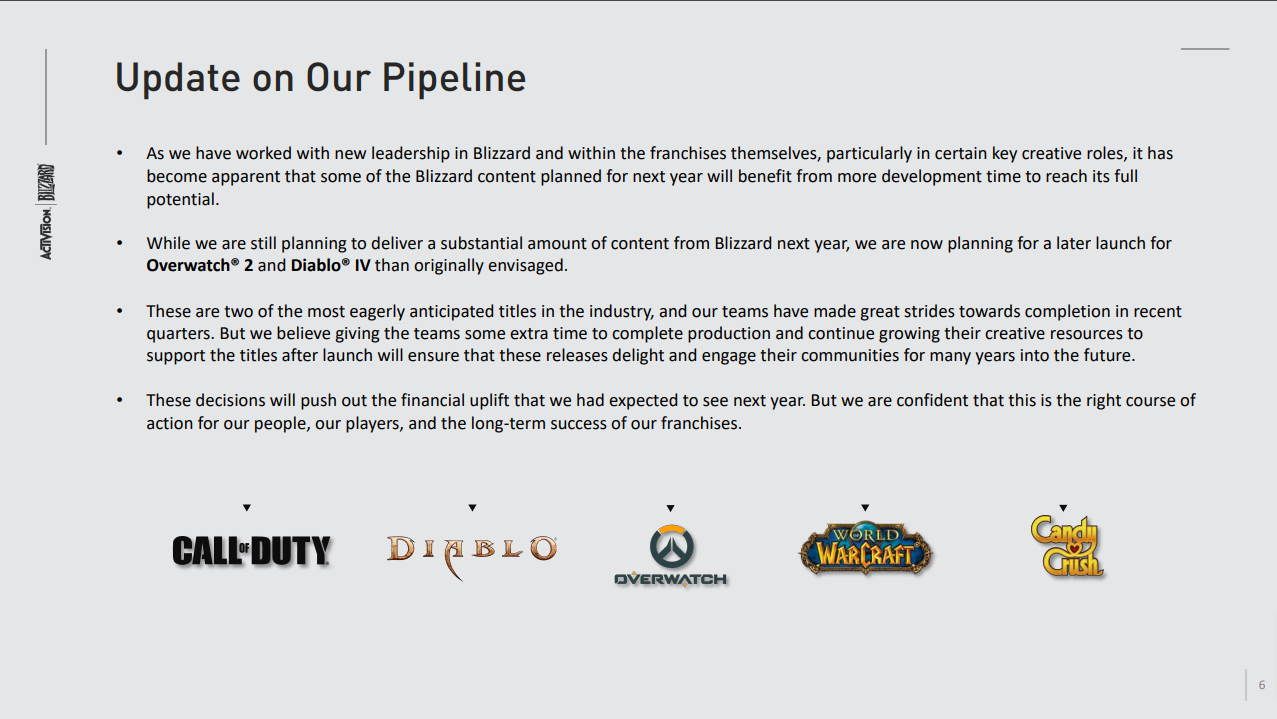 As a refresher, Diablo IV game director Luis Barriga was seemingly let go from the company, along with several high-profile developers including Overwatch character namesake Jesse McCree. The character has recently been renamed to Cole Cassidy. Overwatch 2 executive producer Chacko Sonny left the company in September.