Following the reveal of the new Dragonflight expansion, I had the opportunity to discuss some topics further with Associate Art Director Tina Wang and Senior Game Designer (Content) Jackie Wiley. We delved into many different topics, from what we'll experience in the Dragon Isles to tapping into some of the systems revamps. So, let's jump in and get to it!

Dracthyr is a bit different when it comes to hero classes because there's a very close tie between race and class. Wiley was quick to reconfirm that Dracthyr can only be Evoker, and no other races can be Evoker. Essentially Dracthyr are Evokers, and Evokers are Dracthyr. So, no Warrior or Druid Dracthyr will be running around, which is disappointing but makes sense in the same way that only Night Elves and Blood Elves can be Demon Hunters. However, I hope those restrictions might be lifted when we move to 11.0. That's 100% my hope, though; they gave no indication that's on the table. 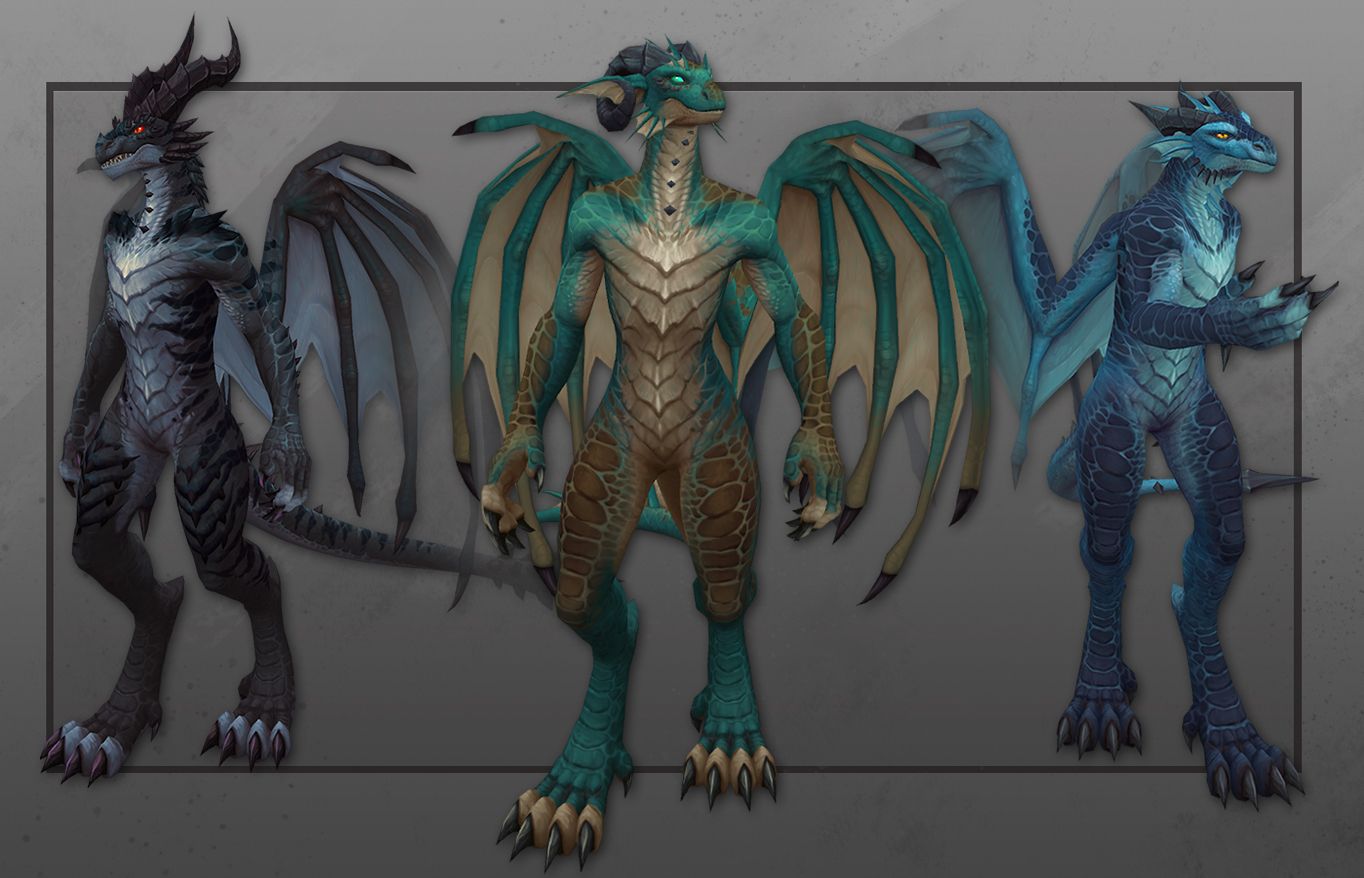 Wang also jumped in to give some examples of the customizations we'll have access to in character creation "there are so many ways you can customize that Dracthyr; even just like the shape of the face, you can have these snouts where you look more ancient or more sleek or a more blunt snout. You can even change your torso to be slightly more slender or more bulkier," and that's just when it comes to their Dracthyr forms; their visage forms (humanoid) will have their own slate of options as well.

Additionally, Wang clarified that the Dracthyr forms would be the combat form (similar to how Worgans work), and although the visage form will show all armor, the Dracthyr form will only show shoulder, tabard, and belts. I was a little bit disappointed to hear that, but it does cut down issues with armor clipping, which probably would have been a significant issue considering Dracthyr also has two massive wings. Interestingly, the artwork images for Dracthyr seem to show helms, but it's likely those are just adornments chosen in character creation.

As with other hero classes, Dracthyr will start at level 58 and be available during the prepatch period so players can start Dragonflight with their new Dracthyr all ready to go.

Over the years, Blizzard has struggled with the effect flying has had on WoW, namely making it much faster to get from point A to B and massively trivializing multiple forms of content all at once. The balance they have struck over the last few expansions has been to delay players from being able to fly right away to one of the later patches. While this has worked reasonably well, especially once reputations were removed from the equation, it has always felt a bit like an arbitrary restriction. I always find myself waiting on flying to bother even trying certain things. Most of the time, it's treasure chests I put off getting until after I get flying.

Dragonriding seems to be a new way Blizzard is trying to address this issue. At first, we'll be fairly limited in how far or fast we can fly on our dragons, but our skill with them will increase over time, and we'll be able to do many more things. All of this sounds like it could be interesting and fun (it reminds me of GW2's Griffon, which is a blast to use). However, the big question will be how we attain these unlocks and how long it'll take to get everything trained. I'm hoping for a generally fun system that doesn't make me feel too hampered early on. Ideally, a system where the more I use my dragon, the quicker I can unlock things.

I also asked about the role of our regular mounts in the rest of the expansion. Unfortunately, they didn't have anything they could talk about regarding flying later in the expansion, as they are still having those conversations and figuring out what makes sense. Wang pointed out that once we have advanced our skill with dragonriding enough, we'll be able to fly faster than with regular flying. My sense is that the team will assess how players feel about dragonriding as we move through the system and then make determinations if regular flying is still needed or desired.

One aspect that was briefly covered in the reveal and deep dive, but Wang went into much more detail was how much we'd be able to customize our dragons. She specifically called out the velocidrake, which is an entirely new type of drake in WoW, will have "wildly different snout customizations." She also pointed out that players shouldn't have an issue getting their dragon to look distinctive from everyone else's because the drakes' options are so vast and varied. Wiley also had this to say about obtaining customizations "as you move through your Dragon Isles experience, you are going to unlock different ways to customize your dragon… you might do a side quest that gives you one customization, or maybe a boss in a raid drops another one… or in treasure chests, you're going to find them throughout your experience of Dragon Isles doing different activities." She also clarified that making the changes to the customizations will be through a system that is "essentially a dragon barber". 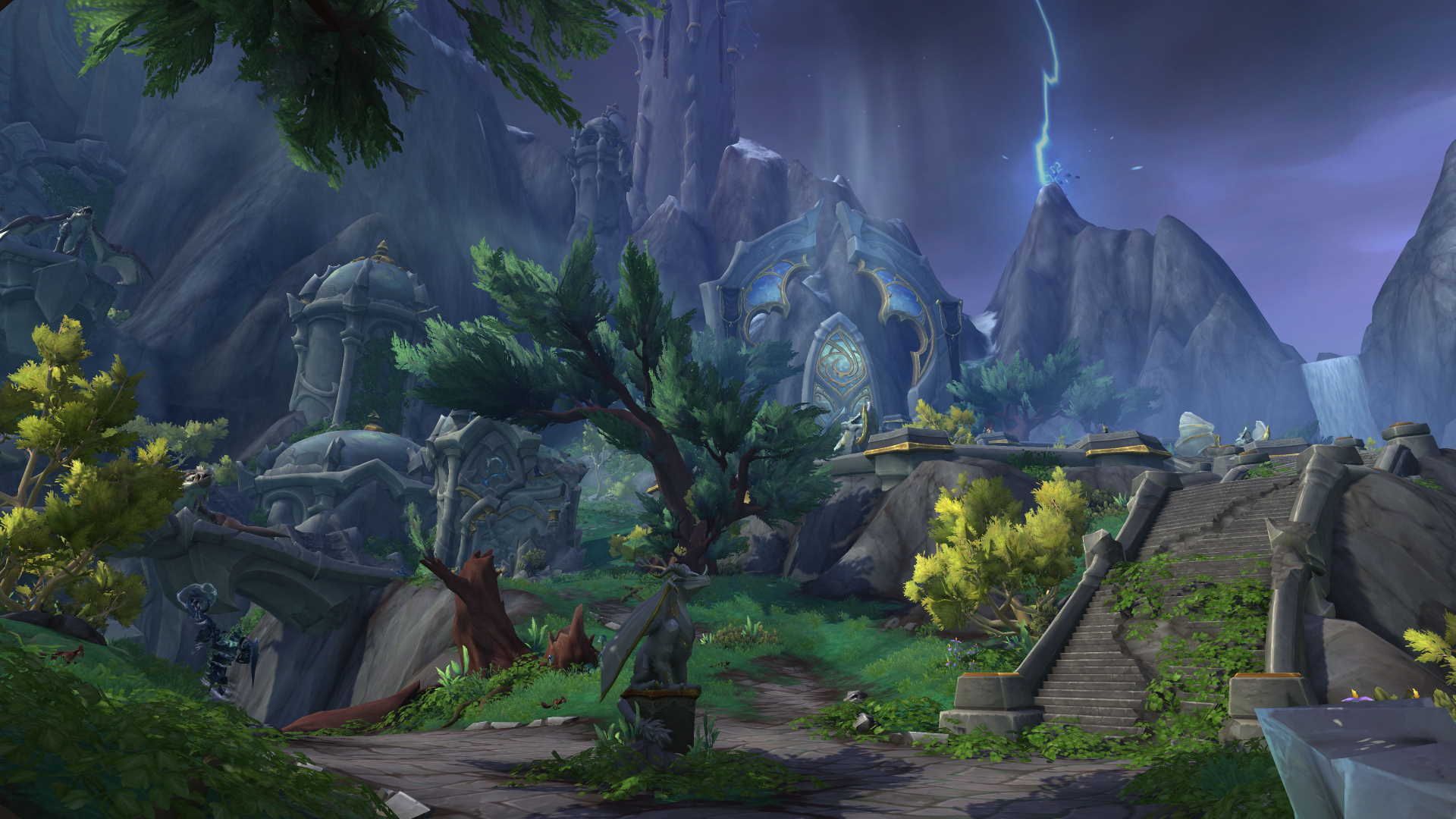 One of the best changes coming with Draginflight is that there will be no borrowed power to acquire. Wiley quickly pointed out that this also means that the dragonflights won't function like new covenants, and Aspect Power will not be a thing. This also means that as we level through each zone, we'll have a more cohesive story experience than we did in Shadowlands. Since players had to pick a covenant, each zone functioned more like an introduction to them, and it felt like their stories weren't complete until I started playing through each covenant's max level storyline. I'm delighted to know this issue won't be making a reappearance in Dragonflight.

Another thing Wiley touched on is the fact that the leveling storyline is so linear; that some players won't want to play through it multiple times for each alt. However, they are aware of the issues that arose with Threads of Fate and don't want to repeat them. Instead, they envision a system where players can "level through dungeoning if they want, level through doing side quests, or different chapters that might appear throughout the zones." What she describes sounds like the ideal situation for alts, where players can level how they want and change course if they decide to level in a different way. They haven't hammered all the details out yet, but this is a great starting point.

One thing that surprises me a bit is that I'm actually excited to have more options for talents again. Hopefully, everything will be balanced this time so that everyone isn't running the same cookie-cutter builds as everyone else. Being able to customize my build to how I want to play is something I have missed. Wang also clarified that we'd be able to save various builds, name them, and then swap between them, similar to how we currently switch around talents. So, no cost to respec and no random resource like conduit power to limit these changes.

I worry about whether there will be a limit to how many builds we can save. Part of me thinks that three or four could be an expected limitation so players could have their PvP build, M+ build, Raiding build, and maybe an open world build. However, there are multiple situations where having more than one build for a game mode might be useful. For example, depending on class synergy or different afflixes, different M+ builds could be useful. Plus, I also hope whatever limit is per spec rather than for the character as a whole. Setting a limit of three per character could easily be insufficient for anyone who plays multiple specs on one character.

During the deep dive, it was mentioned that Wrathion might have some conflicting issues about being the leader of the Black Dragonflight and if that's even something he wants to do. This stood out to me as last I knew, the Black Dragonflight is just Wrathion and Ebonhorn, so I immediately wondered if there might be other black dragons around that we don't know about. Although neither Wang nor Wiley could indicate if there might be more black dragons out there, Wiley did point out that this expansion offers a lot of room to explore Wrathion and his relationship with the other dragons and his personal history.

Wrathion is the youngest dragon who has taken on a leadership role, and he's never been to the Dragon Isles before. So, just being here might bring up a lot of inner turmoil for him. Plus, the obvious question is, can two people be a dragonflight, and if not, what does that mean? Wiley also indicated that he might gain some guidance from Alexstrasza because although they haven't always seen eye to eye, she has a lot more experience than he does. Aside from everything with the Green Dragonflight, this is the storyline I am the most curious to experience. Wrathion has always been a bit complicated, but I'm interested in where his path takes him.

That's everything we talked about; we're still early in the expansion reveal, and I'm sure more information will be coming in the following weeks and months. My only question for now is, Alpha when?