This month I had the absolute pleasure of sitting down with Tim Fletcher and Matt Casey from Jagex to talk a little bit about the Elder God Wars, a story that has been taking shape over the past 12 months for RuneScape adventurers. A year may seem like a long period of time to release core story bits and content, but the Elder God Wars isn’t just your typical fetch quest. In this saga, adventurers will have to learn how to cope with their very perception of reality being shattered when some ancient truths are brought to light. 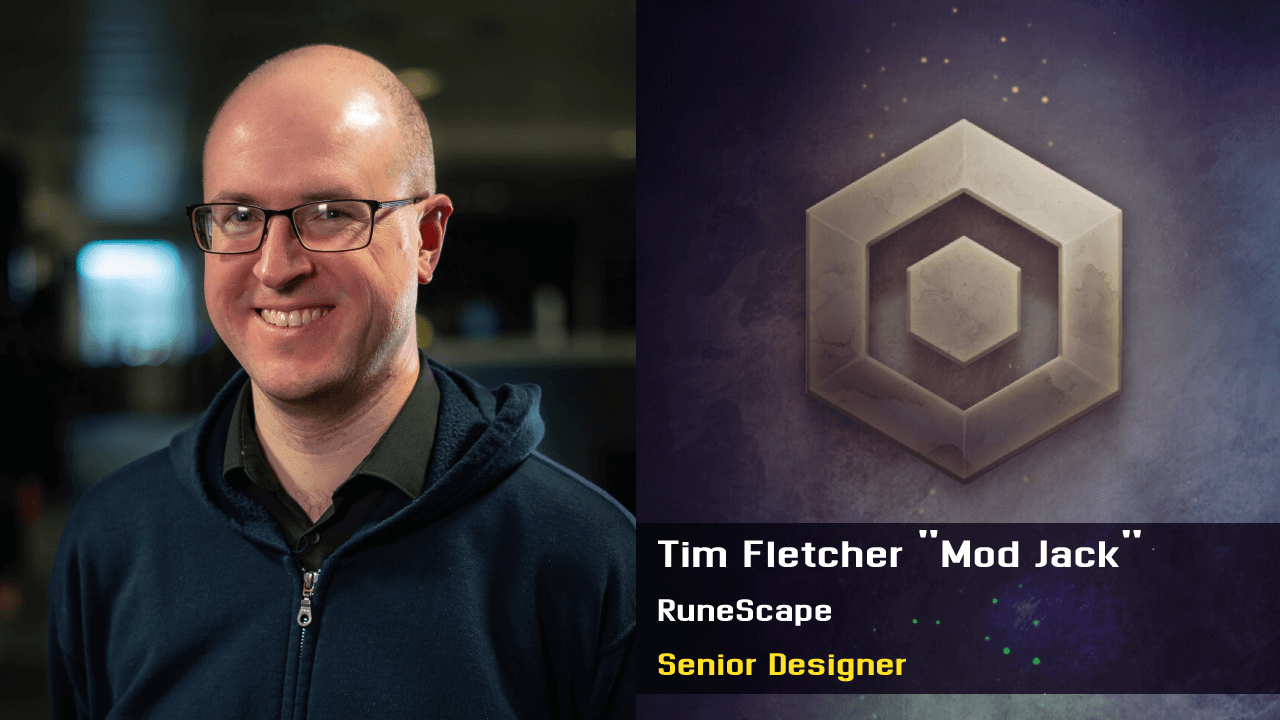 MMORPG.com: Players have been looking forward to and experiencing the Elder God Wars storyline for the past 12 months, but how long has this epic story been on your radar and in the works?

Tim Fletcher, Senior Designer at Jagex: The Elder God Jas was first depicted in 2016, but it was at Runefest 2018 where we announced that the new storyline which would focus on the Elder Gods.

It's interesting to compare our original plans from 2018 with the storyline that ultimately ended up in game. If you want to look back even further, the Stone of Jas goes right back into the mists of RuneScape's history, but at that point no one envisaged that this was where the storyline was leading us.

MMORPG.com: Can you tell me a little bit about the teams that were involved in bringing this story to light? Please brag on yourselves, this is a huge achievement!

Tim Fletcher: Mod Shrike was the feature lead for the project, and she recently tweeted out a full credits list here.

The movie poster-style image in the tweet was made by a player. 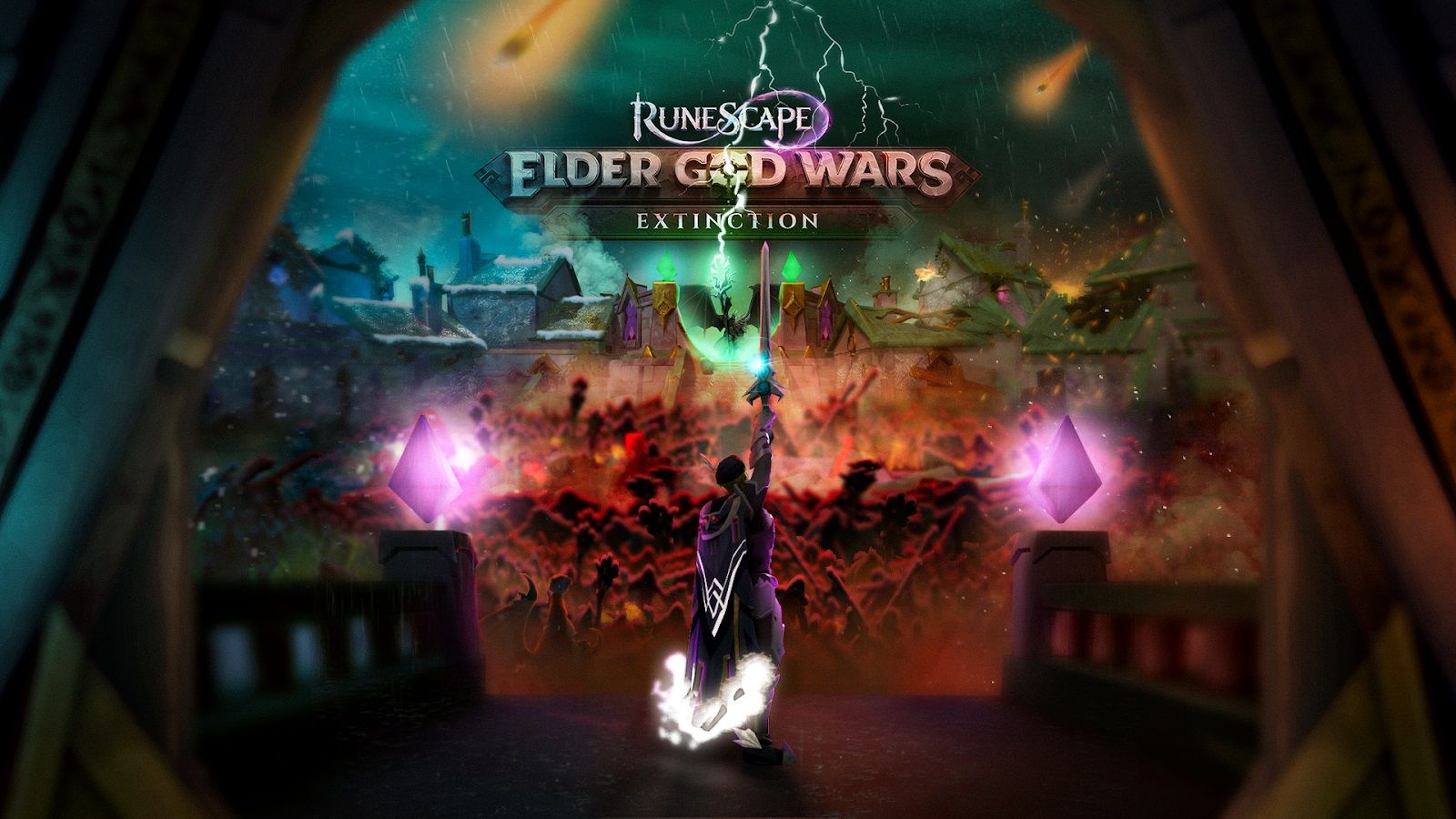 As you can see from the list, it takes a lot of people to make something like this. I'd especially like to call out that several fairly new developers who worked on this quest (including Mod Shrike), but they immediately stepped up to the plate and turned in some fantastic work. Another shoutout to Mod Surma who has been building up a set of musical themes across the whole storyline, which have repeated and grown across the content.

??Extinction Quest Audio Teaser????A huge thanks to the incredibly talented @JulieElvenMusic whose singing made the track all that more evocative!??We can't wait for you to hear the full track in game!Seren: "...I had no choice"#gameaudio #vo #sounddesign #RuneScape pic.twitter.com/bDHpmo1hIs

MMORPG.com: How does the team feel now that the final Grandmaster Quest: Extinction is out there? Any regrets or things you would have done differently?

Tim Fletcher: We're very happy with the quest, although we take player feedback seriously and as always, we study what our players have to say so that we can learn from it. For example, we've seen a lot of reservations about our use of 2D hand-drawn cutscenes to depict epic events. This is a difficult one to resolve, as in some cases the events being depicted are ones which our engine simply can't do justice. My takeaway is that in future we'll be more careful to set up scenarios which we can depict in game, or better yet in gameplay.

MMORPG.com: By now, players have had a chance to experience the Eye of Het miniquest and see Zamorak’s betrayal. While he is the Lord of Chaos, even a young god must have an interest in self-preservation. It always seems like the Dark Lord is one step ahead of us. Will we learn more about his motivations?

Tim Fletcher: While in some settings the gods are something like anthropomorphic manifestations of ideologies, emotions, or concepts, in RuneScape the gods are mortal beings who were granted immense powers. Although Zamorak styles himself as the Lord of Chaos, he's a complex being with his own background, emotions, and motivations. He’s always strived against the sort of authoritarian calm that Zaros and Saradomin maintain. In Zamorak's opinion, it's better to suffer and be free, than to live as a docile sheep in a peaceful society. 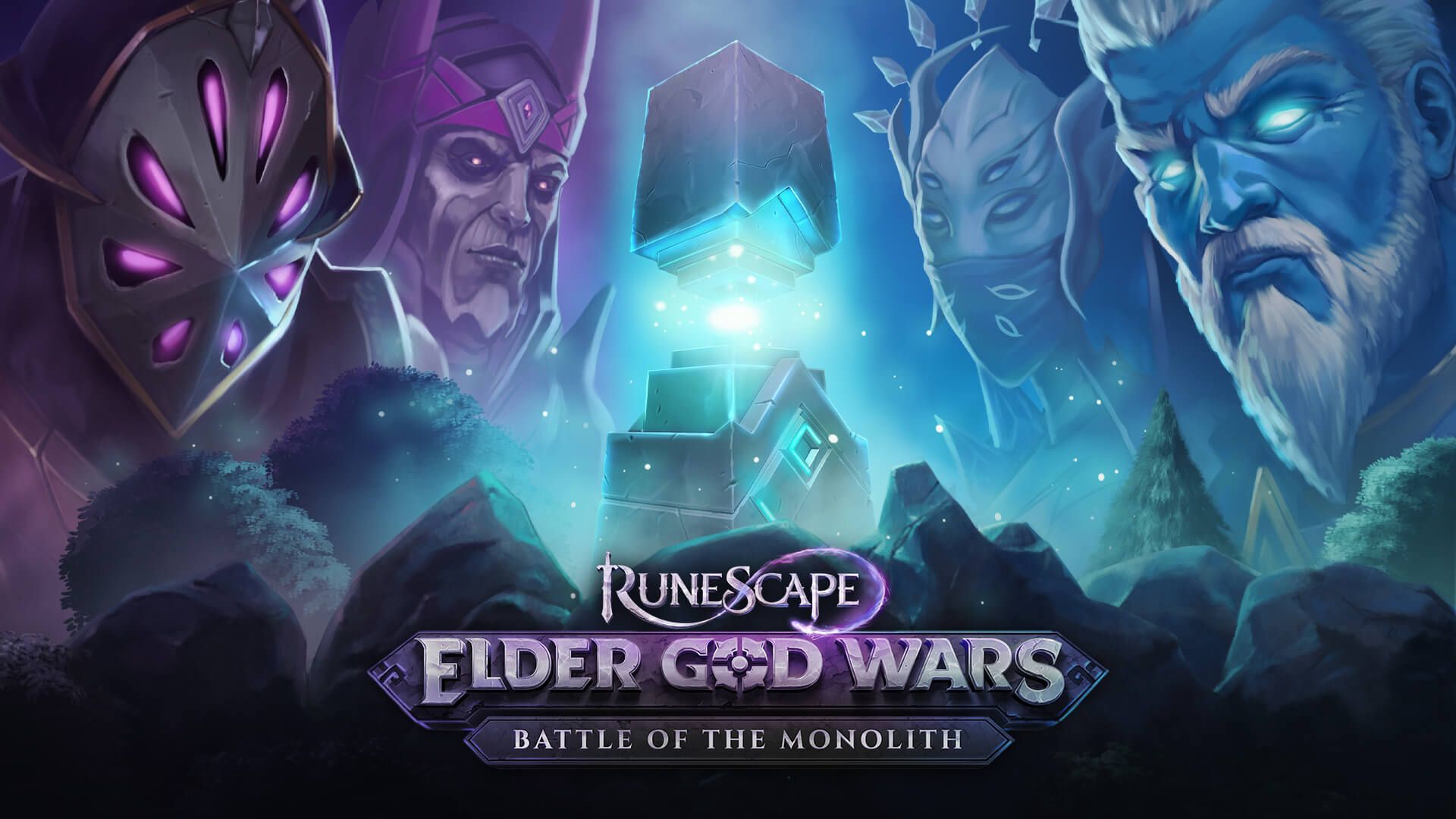 MMORPG.com: If Gielinor and her champions survive this final, world-shaking trial, will we be moving towards the Seventh Age for new quests?

Tim Fletcher: I wouldn't call it a "Seventh Age", as that would make the Sixth Age only a few years long. That said, the events of this year will be just as tumultuous and status-quo shaking as the events that led to the Sixth Age, and we're only just getting started.

MMORPG.com: Many fan favorites and core adventurers like Ariane make an appearance in this questline. Are there any plans to add more lovable, recurring faces to the line-up in the future?

Tim Fletcher: Extinction brought in a new character, Adrasteia, and gave new prominence (and a beautiful new model) to an old favourite, Moia. We're definitely planning on seeing more of this pair in the future.

In more general terms, we're always trying to maintain a balance between bringing back old characters who don't see enough screen time for their fans and introducing new ones to get to know. Personally, I'm quite interested in finding more obscure, lesser-known characters, dusting them off, giving them a bit more personality and bringing them into more of a main cast role. Often this will depend on the individual developer - originally there were no plans to feature Adrasteia in Extinction, but Mod Shrike noticed that she fit well with the core quest themes of parenthood and paired well with Moia and chose to focus on her. 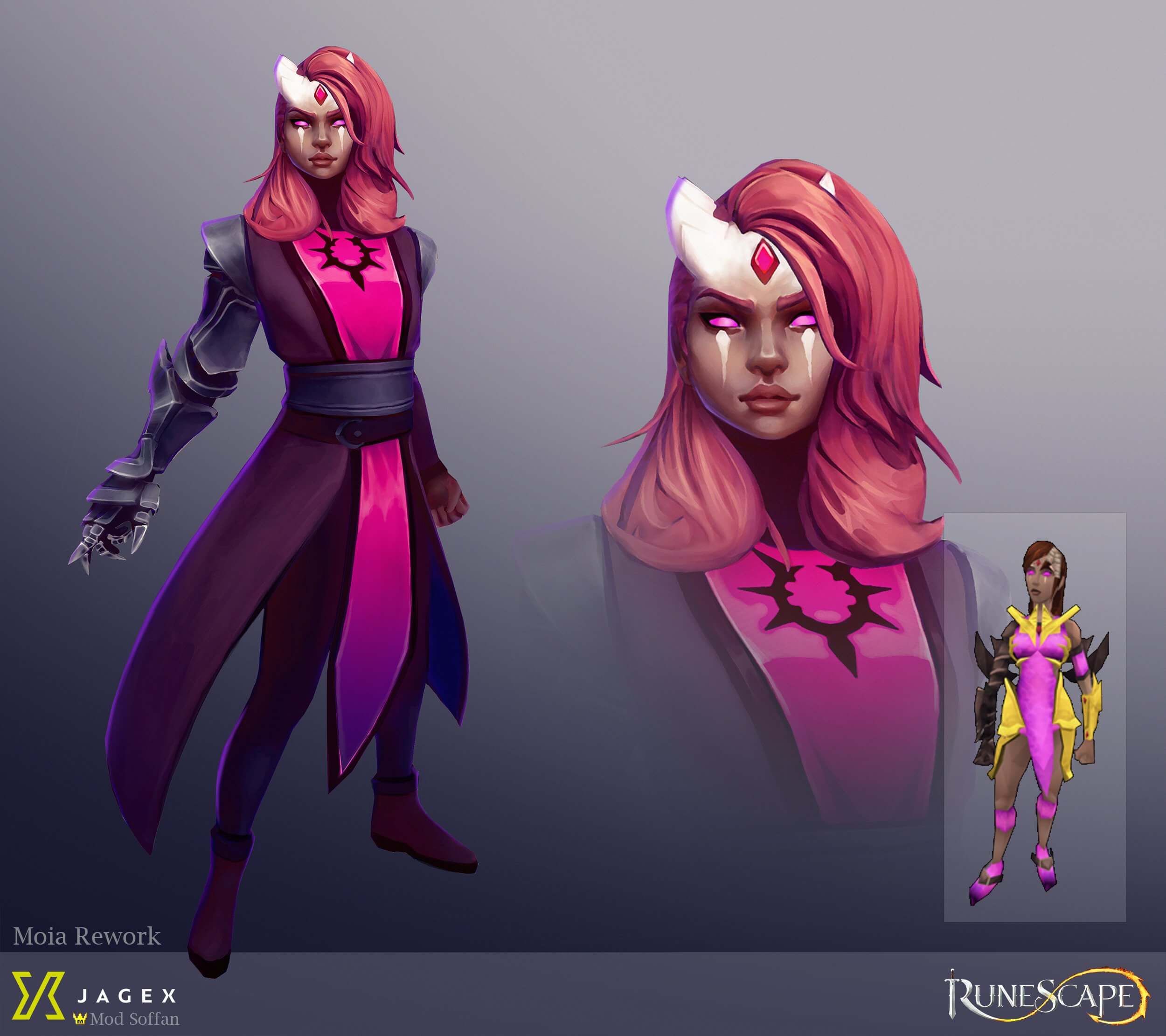 MMORPG.com: Can you drop us an exclusive hint about the next big saga? The lore lovers of RS are dying to know! (Doesn’t hurt to try, haha!)

Tim Fletcher: Cryptically, we've announced that there's going to be a fifth boss for the Elder God Wars Dungeon in the continuing tradition of Nex and Telos, but that it's going to be part of the next storyline. This is odd, but it will all make sense in retrospect. You'll be finding out more about the identity of that boss very soon, and when it's revealed everything should start to slot into place.

MMORPG.com: Personally, I’d really like to see some more love for Player Housing, especially when it comes to showing off your accomplishments to friends in-game! With such an epic story concluding, it would be so interesting to have a quest trophy that’s rewarded at the end that we could place in our home. That would make for a fancy house party! Are there any plans to implement a sort of trophy room where the heroes of Gielinor could store their knick-knacks after an epic quest? 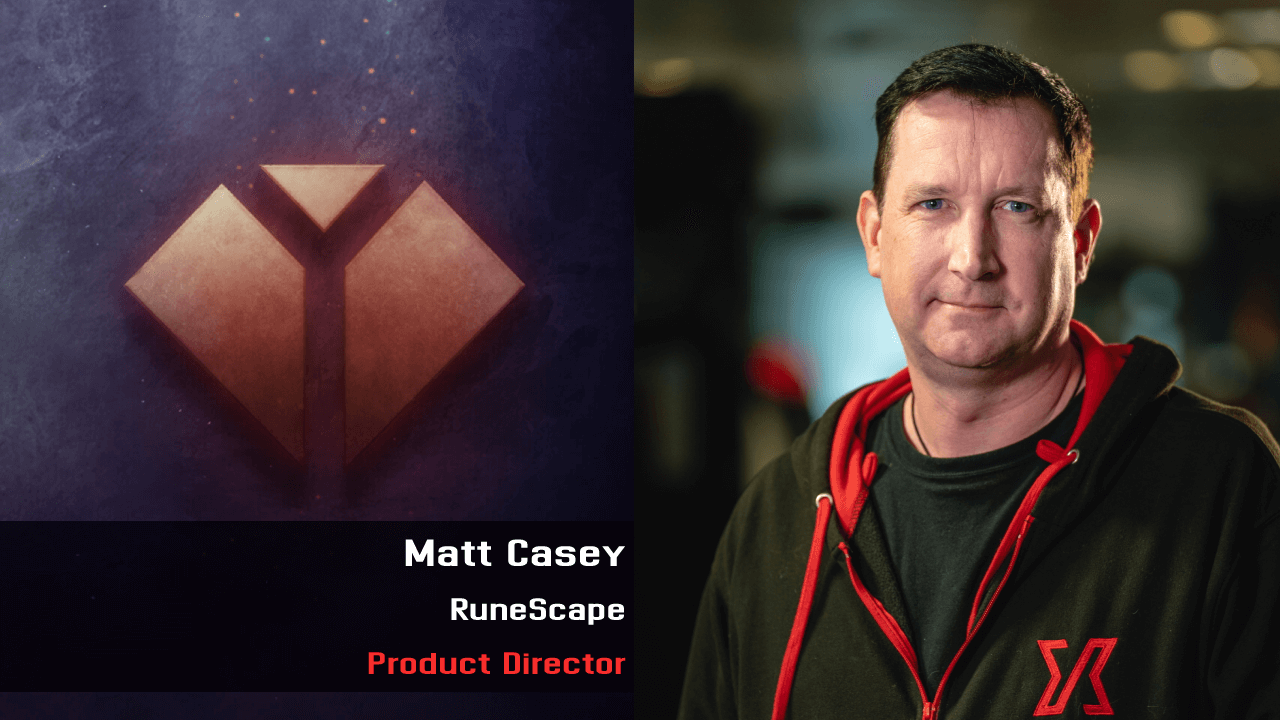 Matt Casey, Product Director: Really like this idea. Nothing definite in current plans but I think trophies for longform content like this is something we could bring in. We do have the Quest Hall room in the Player Owned House but this could probably use some TLC (maybe something for an upcoming Ninja Strike?). I’d also like to see a new trophy room in the Clan Citadel so you share bragging rights with clannies.

MMORPG.com: A while back, a new graphical update for player models was teased but has kind of flown under the radar since the initial announcement. How is that coming along, and do we have an ETA? They looked fantastic!

Matt Casey: We were also really excited by the proof of concept work we did on the player avatar model, but we ran into some technical issues as we investigated it further. Making this work with the vast array of cosmetics that our players like to mix and match is a much larger task than we first thought, so we have put this on hold while we investigate other options.

A huge thank you to Tim and Matt for sitting down to talk with me this month. I can’t wait to log back in and experience the epic conclusion of the Elder God Wars myself! See you in Gielinor.