With Gundabad and the future on the horizon for The Lord of the Rings Online, we sat down with the team’s executive producer, Rob Ciccolini, for an interview last week. You can read part one of our interview here, but there was so much we covered it made sense to break it into two parts.

Since we had last spoke, Standing Stone Games, and Daybreak as a whole, had been purchased by Enad Global 7, and for many long-term fans of the decade-plus old MMO saw the purchase as a way to inject more life into LotRO. For his part, Rob certainly doesn’t seem upset with the direction since EG7 got involved.

“EG7 is certainly excited about the game,” Rob told MMOPRG.com via a Zoom call. “And definitely wants to increase it. We have had new members added to the team recently and will continue to do so.”

One of the major points made by EG7 after it made the purchase of Daybreak was to break down for its investors its different IP, as well as future plans for the heavy hitters. We finally saw player counts for many of the games Daybreak kept a tight lid on, but one major aspect that caught many an eye was a potential graphical update for LotRO specifically.

Throughout the years the team behind The Lord of the Rings Online has worked to improve the graphics and engine over time, adding features such as DirectX 11 support, as well as the recently release Per Pixel Lighting Attenuation technique which can really transform a scene. Rob states that the team wants to continue down this path, improving the graphics and engine to ensure that they are doing everything that can to provide not just a fun game and story, but something easy to look at as well. 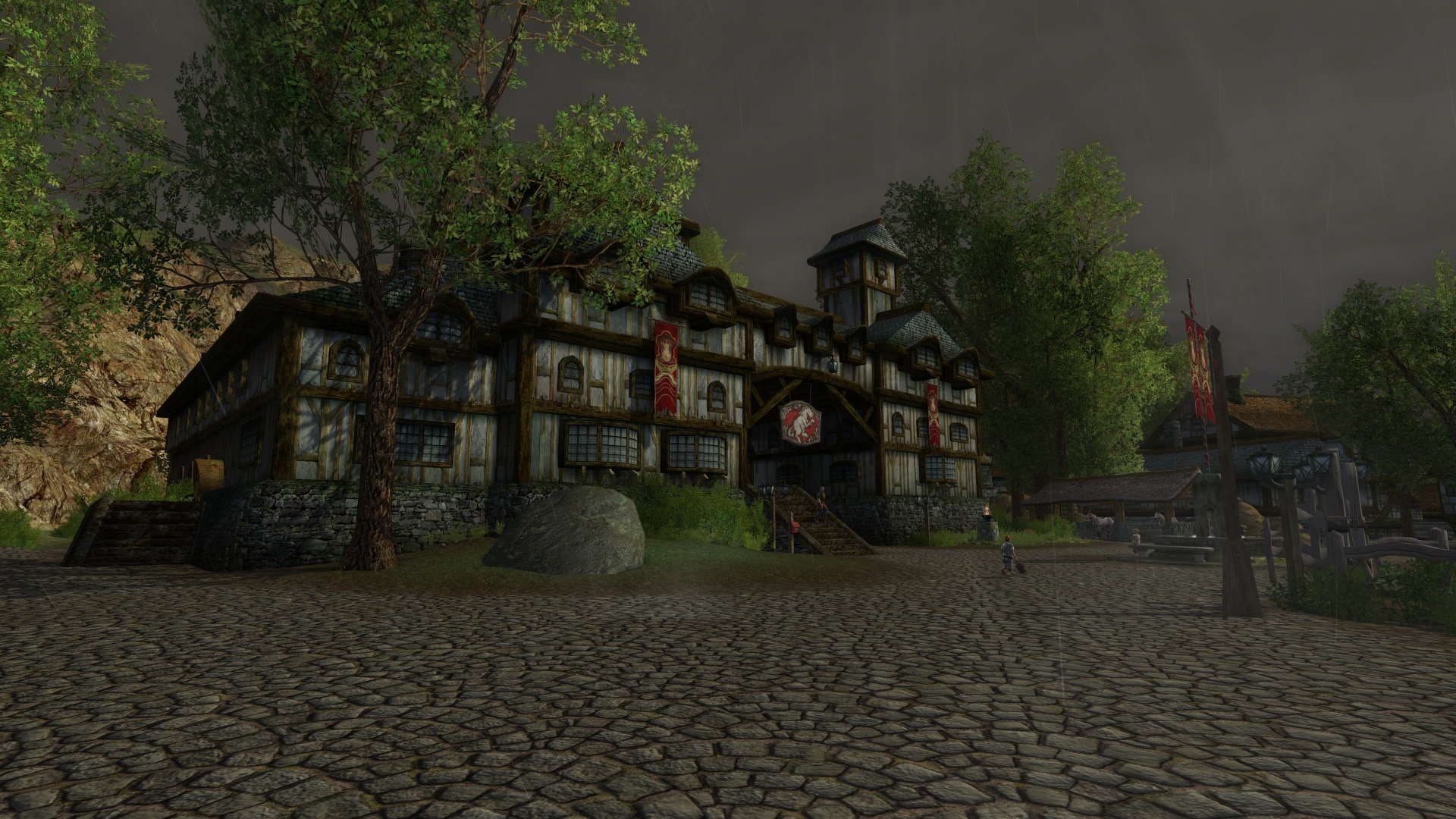 “At some point we would like to make bigger inroads into our graphical fidelity and our art, and maybe bring some of the older zones into the fidelity of our newer zones. I think that there’s a lot of improvements that we can make there. First of all, I love the game, but we do a poor job of 4K support, those graphics need to be updated to do that, [and] that’s something we want to do. At some point as well, it just turns out that the amount of work was surprisingly large when we looked into it, because of all of the redone art.

“The other thing is that we have made improvements to lighting recently, but there’s a lot more to be done there. We could make additions to particles. So one of the things we’re trying to do is we’ll be looking for engineers in the short term, particularly people who can help us work on our tools to give our people better support. And then longer term we’ll see. We are looking into do more major revamps to our graphics and the game as a whole, but I have nothing to announce longer term on that.”

The new Brawler class is also a point that players are eager for more information on. The Brawler is set to be a DPS/Tank class that uses heavy armor and fist weapons and gauntlets to take down his foes. As far as how the Brawler itself fits into Tolkien’s legendarium, I was thinking Tulkas, one of the Valar, or Powers of the world. However, Ciccolini mentions that another source of inspiration could be what is setting the stage for the Brawler in LotRO: the Dwarves.

“There have been a number of lore bits about the Dwarves and them looking up to a person who’s just so powerful that they can essentially fight when disarmed. I think that is part of it, although we want to stick to the books, right? But part of it I think is some of the Thorin Oakenshield mythos is when disarmed he was able to win by picking up what he had at hand as well, right? And so I think that that’s part of the Dwarven mythos, is always being prepared. And between like, when you can forge be ready, but if something happens and that weapon is lost, be ready. And the Brawler kind of speaks to that, at least in my mind.”

While many of the upcoming Lord of the Rings-based entertainment properties are set in the earlier years of Tolkien’s legendarium, LotRO is squarely looking at what is available in the trilogy, though this doesn’t mean that the story itself won’t tinker with taking players to the past. Jumping to iconic moments, such as the Battle of the Last Alliance as we’ve seen with the tutorial of the High Elves, isn’t foreign to the LotRO team, and it’s a tool they will be looking to use in the future as well.

Not only that, as mentioned in our previous interview, areas are open to the team that are only briefly touched on by Tolkien himself. Traveling down to Harad where the stars are strange, or venturing into Rhun to discover what happened to the Blue Wizards – all of these are viable options for the team who still have so much to explore in terms of the world Tolkien left them. And because Tolkien left gaps on the map vague, or even intentionally didn’t explain certain bits in the story (such as why Smaug seemed to have free-will when the Dragons of Old were dependent on the will of Morgoth/Sauron), it leaves much for the team to play with.

“Tolkien definitely was one who wanted to bring forth wonderment, and sometimes when bringing forth that wonderment he didn’t want to just outright explain things flat out. And so I think that if we can bring that same sense of wonder to the players, that wandering the land and exploring Middle-earth, that will be doing him justice. And that’s always our goal: to do him justice. We want to build a world that is as complete and true to Tolkien as possible. And as we move around and do future stuff, I think there’s a lot of places there where we can do that. Not to mention there is a lot of opportunities for telling tales that the books only touch upon, you know, as you’ve seen historical tales where we can let the players relive those.”

As far as branching out to other parts of the mythos, such as exploring Beleriand or even the early days in the First Age (or even as far back as the Year of the Trees), Rob chuckled.

“There is so much in the books that are touched upon that we have plenty of things just from the trilogy. Tolkien was not shy about chronicling past events in his books, so there’s plenty for us to look into.”