When Solasta: Crown of the Magister first entered early access in December 2020, I was completely blown away by how faithfully they had translated a tabletop gaming experience to a video game. My interest was further piqued when they announced they would be releasing a dungeon creator in their next update. Naturally, when the opportunity to interview Mathieu Girard - Founder/CEO/Creative Director, Pierre Worgague - Marketing Director, and Emile Zhang - Community Manager, I leaped at the opportunity. What followed was a pretty in-depth discussion about various development plans and how Tactical Adventures plans to listen to the community's feedback regarding the dungeon creator's future development.

When Tactical Adventures set out to make a dungeon creator for the community to use, the first thing they did was discuss what they would want out of a dungeon creator with members of their community. Girard mentioned that one of the critical pieces of feedback they took to heart was making the tools as easy to use and approachable as possible. While some players might enjoy working in Unity with the same tools the devs use, for others, that type of setup would prevent them from making use of the dungeon creator. Alternatively, making things too cookie-cutter would limit players' creativity and ability to create genuinely unique dungeons.

It seems like they have managed to walk the fine line between making things overly complicated and too plug and play well. There's a variety of room types to choose from, and as a starting point, you can choose between furnished or unfurnished rooms. If you decide to go with unfurnished, you'll be able to choose from any of the items currently in-game to place around your dungeon. So, if you are the type who wants to meticulously place every single item in your dungeon, you can definitely do that. Additionally, it is possible to copy and paste rooms with all of their things to help expedite the process. Unfortunately, this can only be done in one dungeon and not across multiple dungeons.

Another limitation of the current system is that you can't make one dungeon with multiple levels. Instead, it's necessary to create each floor as a separate dungeon and link them together through their entrances and exits. The upside of this is it allows each floor to be completely different from one another, not only in layout but also with different moods and environments selected. For a traditional dungeon where players are exploring a tomb or something that might not be very useful, but for an adventure where players are doing something more fantastical, having each floor entirely separate from each other opens up some exciting possibilities. 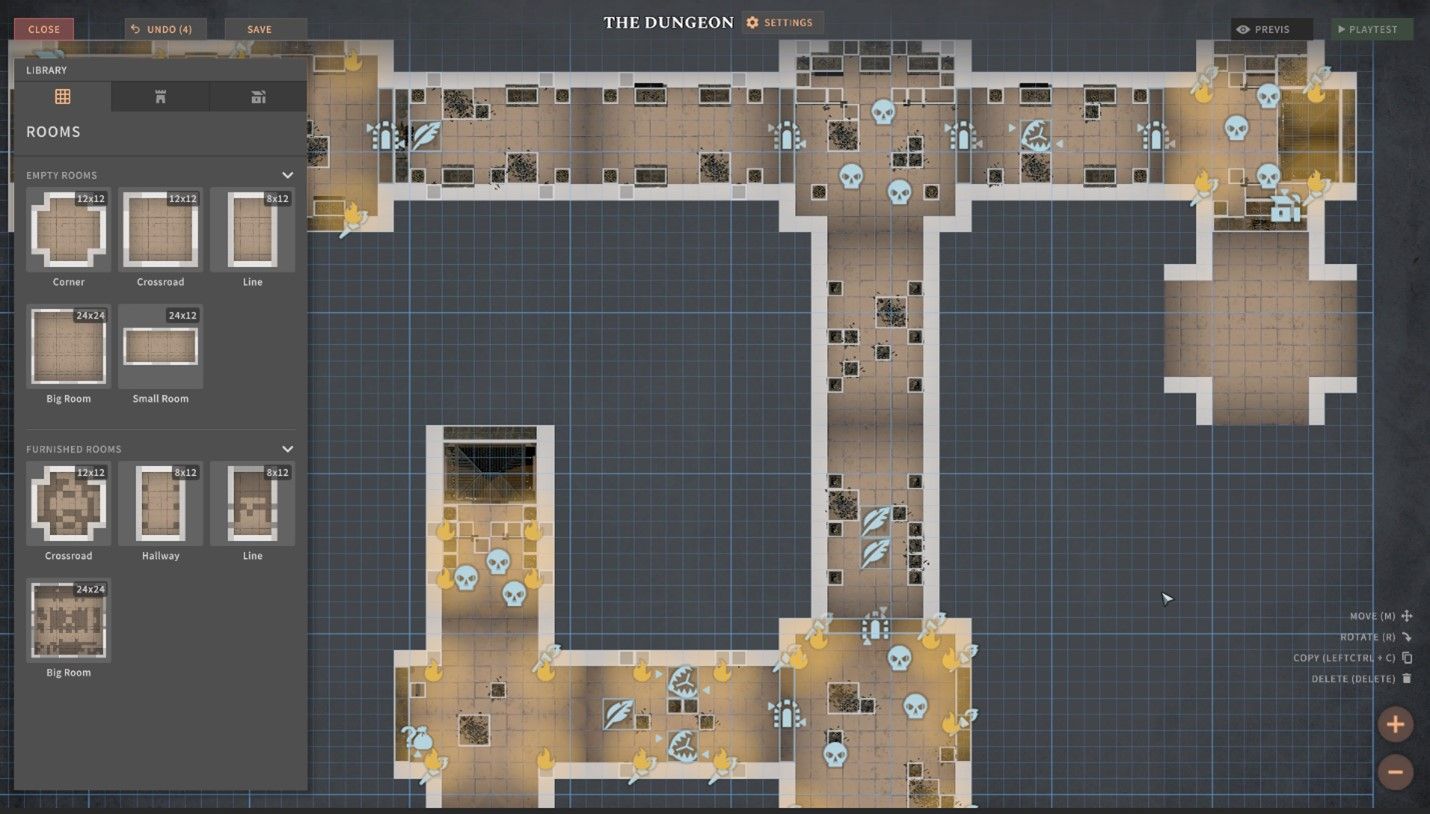 One aspect I was curious about in terms of dungeon building was how to judge the difficulty of what you are building accurately. Every creature does have a CR attached to it, which can help guide this a bit. However, difficulty can increase unexpectedly due to various skill synergies when you start to mix and match creatures. Additionally, the longer players are expected to go without taking a long rest will also significantly increase the difficulty. Judging how difficult something is can be difficult, especially for anyone who hasn't spent much time building encounters. So I was curious if there might be some metric built into the dungeon creator to let us know how difficult the thing we are creating is. Girard indicated there currently isn't a tool like that implemented, but it is something they can look at doing if the community wants it. After all, they have tools that help them judge the difficulty of encounters, so it is possible to do.

Although there are a few features I hope they implement, my biggest concern is how sharing your dungeons with other players is expected to work. Currently, you have to share a text file with all your dungeon info with another player so they can then load it into their game. This will work well enough for sharing, especially for friends to share with each other. However, to make dungeon sharing a fundamental core part of Solasta, it needs to be as easy as possible. Ideally, players would be able to find other player's dungeons from within the game itself. Girard did say they would like to get this on the Steam Workshop eventually, but they don't currently know how that would work. 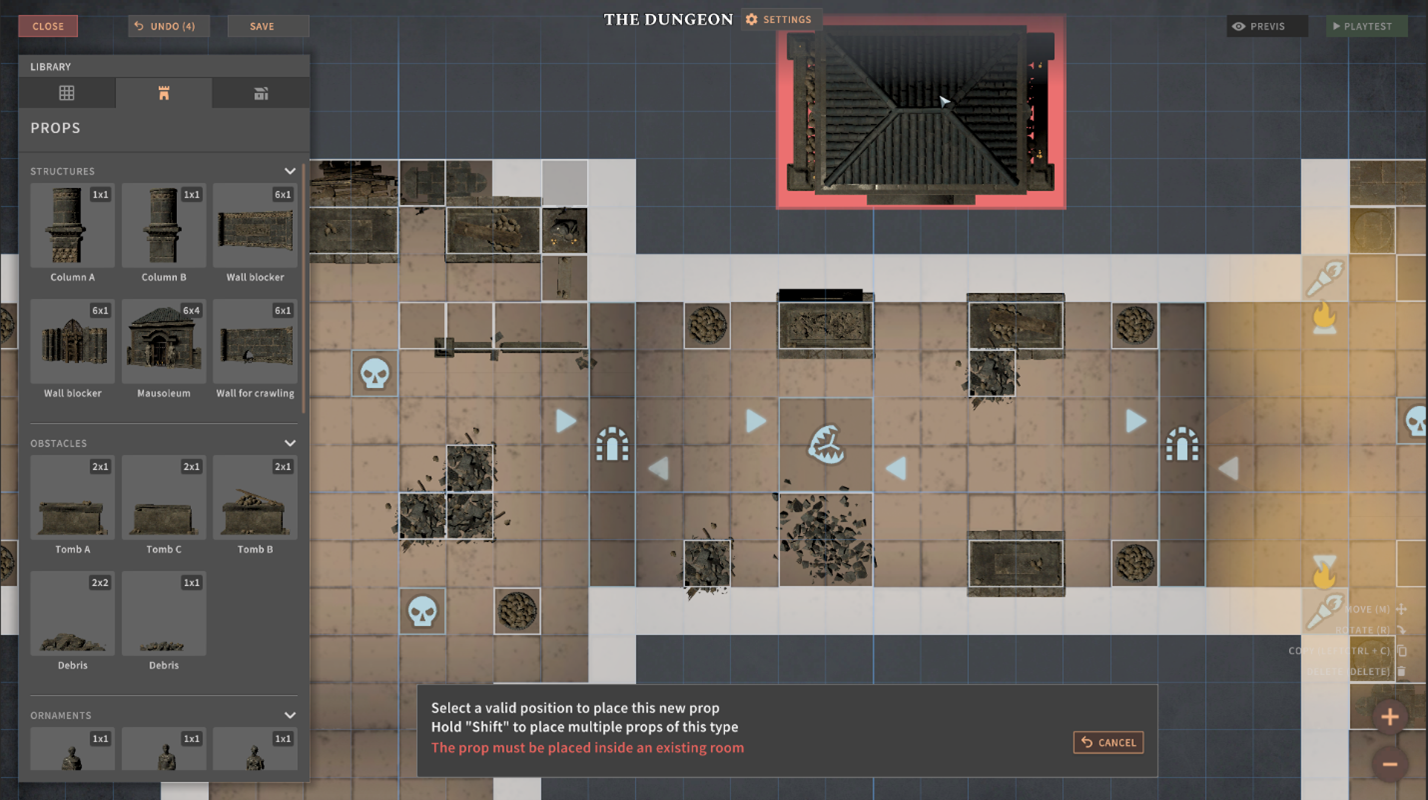 I can't wait for this update to start building out things and seeing what I can do with everything. The dungeon creator is definitely in a beta state, and it'll be interesting to see how Tactical Adventures continues to build it out and add to it. However, anyone concerned that the dungeon creator will delay the final version of Solasta, rest assured finishing the game is their main priority. Girard was emphatic in stating that the main focus is to get the main game fully launched this year. They will turn their attention back to polishing and adding new features to the dungeon creator after that happens.

The spring update with the dungeon creator will go live on March 25th, and for anyone who has been playing, the current save files won't be compatible anymore. So, essentially this is a progress wipe for everyone unless you want to play on a separate branch without the updates.  Additionally, from March 25th – 31st, Solasta will be sold for a discounted price of $35, so it's an ideal time to pick it up as we head ever closer to full release.