RuneScape is one of the oldest and longest-running MMORPGs still available today, with a runtime of over 20 years. To keep the magic alive, the developers over at Jagex have implemented new Fresh Start Worlds as a limited-time game mode. This mode was available starting on September 26 and will only last until January 9 as a member-exclusive mode. Once it’s finished, that’s it; the worlds will shutter and all accounts will be integrated into the main game and become regular accounts.

The upside? All of the exclusive items including pets, halos, and alternative colour skill capes will transfer over as well so you can show off or even trade to your main character. Recently, I had the chance to sit down (virtually) with Frances Keatley, Product Manager for RuneScape, and Tim Fletcher, Lead Game Designer on RuneScape, and chat about these new Fresh Start Worlds.

Do You Even Game, Bro?

Before they gave me a tour of the new Fresh Start Worlds, one of the first questions Keatley and Fletcher posed to me was, “What is your personal experience with RuneScape?” For my part, I initially started playing RuneScape back in 2004 – about three years after its launch – but didn’t stick around for more than a few months. I couldn’t afford the membership at the time (I believe I was in 8th grade) and without access to several of the skills, I felt like I was missing out on a large part of the experience.

I’ve picked it up again here and there – such as when RuneScape 3 launched in 2013, and again just last year when RuneScape Mobile launched – but by that point I felt like RuneScape had been out for so long that I couldn’t catch up with the playerbase. Fletcher said that I was “the target audience” for these new Fresh Start Worlds, which made me think: Maybe it’s not too late to start after all? 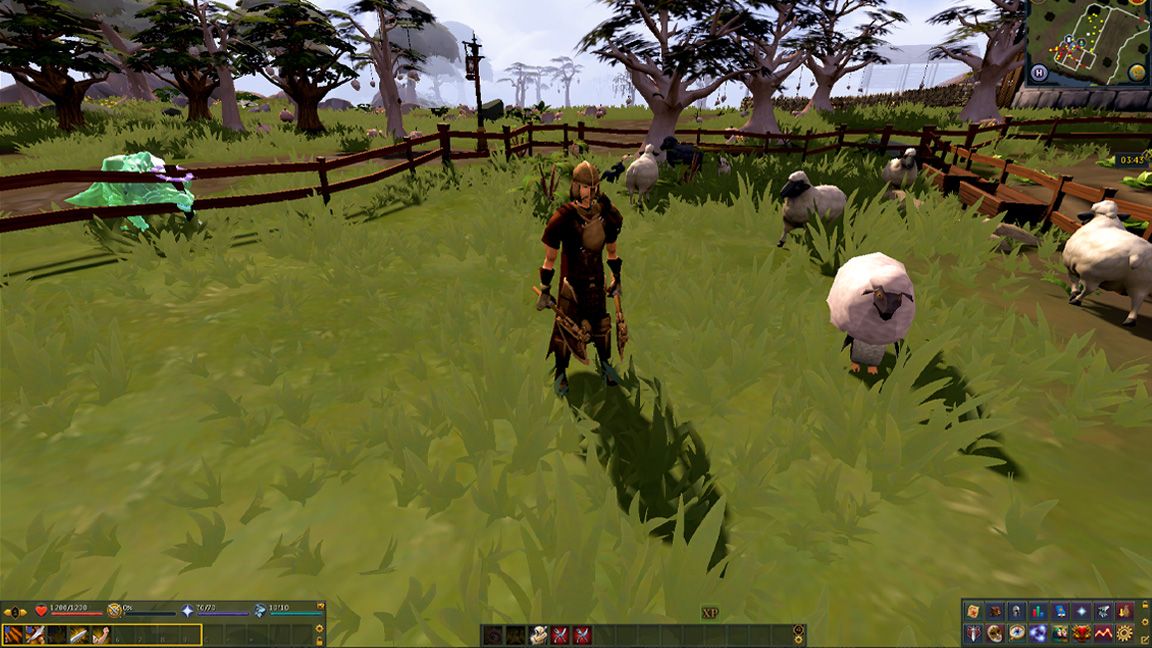 One of these sheep might actually be two penguins wearing a costume.

RuneScape In The Here And Now

So, what’s the deal with RuneScape in 2022 and why is now a good time to jump in? Keatley broke it down for me:

Keatley kept it simple: “Be the character that you want,” and play how you want. RuneScape is one of the most open-ended MMORPGs around, featuring 28 skills, over 200 quests, and optional PvP. There’s no linear progression meaning that players are welcome to explore every corner of Gielinor, the world of RuneScape, and develop the skills that they want to focus on. It’s more accessible than ever before after the mobile launch last year, so you can play RuneScape on PC, Mac, and Linux via a downloaded client, through Steam, on iOS in the App Store, or Android through the Google Play Store.

What’s Fresh With The Old

But you already know all about that don’t you, savvy reader? You’ve played RuneScape before; this is all just a recap for you, isn’t it? “What’s the deal with the Fresh Start Worlds, already!?” I hear you shouting at your screen. Well enter into the scene Tim Fletcher, aforementioned Lead Game Designer, to walk me through the world and show me what I, as a returning player (if I can even be called that), can look forward to.

After finishing the tutorial, if you don’t opt to skip it like I did, you’ll land in the town of Burthorpe which Fletcher mentions is the new starting point and kind of the central hub for players. This is an opportunity for new players to feel like they have a place to begin, instead of being thrown into the thick of it. Coincidentally, this is also where you can find Gale Freshman, a new NPC that offers access to the Fresh Start Worlds Rewards Shop. Fletcher showed off his pet Luma the Wolf – the first reward available through the shop – which had a spiked, purple halo above its head and whose sparkling body glowed with a spectral, cosmic energy as if made by the stars themselves. 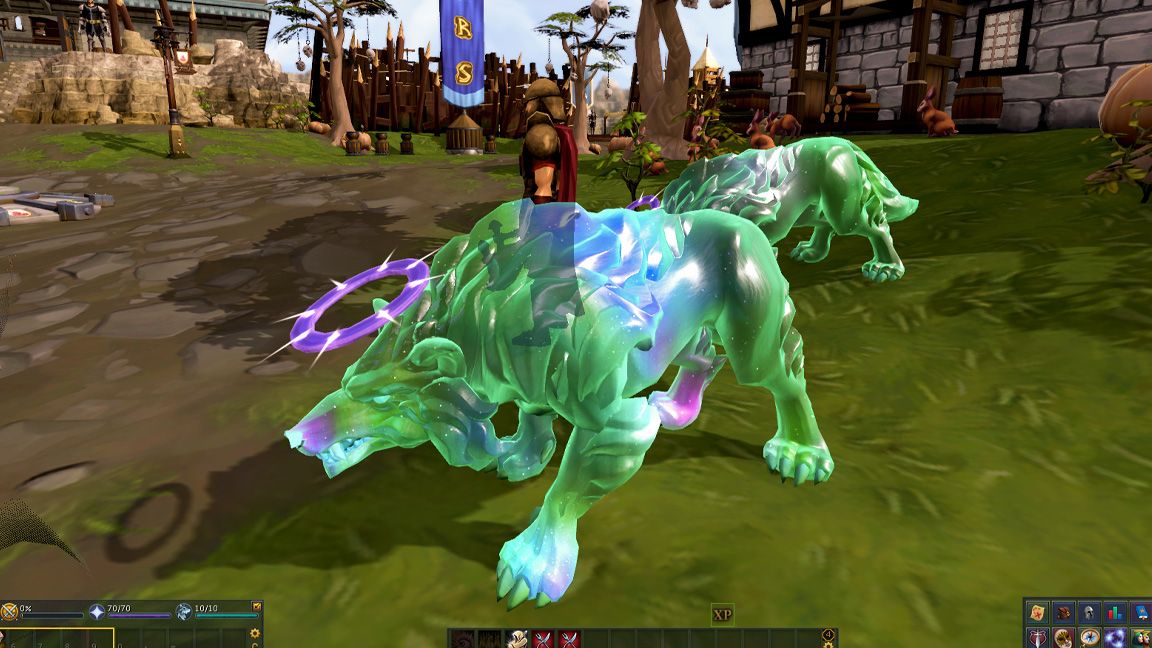 Behold the mighty Luma, majestic wolf of the stars!

And that’s just one of the many rewards available to members exclusively on the Fresh Start Worlds. Other rewards include:

How To Unlock These Rewards?

Simply earn Progress Points based on your own progression track and reach certain milestones. Players are rewarded for playing how they want to play, just by being active on the Fresh Start Worlds. Activities like completing Quests, leveling Skills, and unlocking Achievements all earn points. As was mentioned to me: RuneScape is not exploration based – it's  goal oriented. Want to live your dream as an angler? You can do that. Focus entirely on combat? You can do that. Live that Harvest Moon lifestyle and focus on the Farming skill? Yessiree.

Fletcher walked me through the town and out, heading south towards the port, to board the boat to Lumbridge. Along the way, he gave me some stats about how the Fresh Start Worlds were faring so far. They’ve already seen over 33,000 accounts registered on the Fresh Start HiScores – a number that has since risen to over 40,000 as of the time of this writing – which Fletcher commented had a good mix of both new and returning players. Some skills have already been capped at the max level of 99. The first of which was Magic, which Fletcher said was done only 13 hours after the Fresh Start Worlds’ launch went live. He also mentioned that he has seen plenty of the new skilling pets with halos while walking around, a reward earned as a random drop by training skills.

To help with unlocking these rewards, the Fresh Start Worlds feature weekly boosts like +100% XP for skills under level 70, “free deaths” so there’s no penalty for dying, or even a chance at double yields for gathering materials. Additionally, there are certain exclusive Fresh Start World ‘Boons’ you can earn. While these Boons won’t carry over to the main game, you can get some pretty fun boosts like Infinite Run Energy, infinitely reusable food items, and a 25% chance to save on runes, arrows, bolts, and other consumables used in combat. This sounds like a perfect opportunity for new players to catch up to their friends in the main game that might have capped their skills long ago. 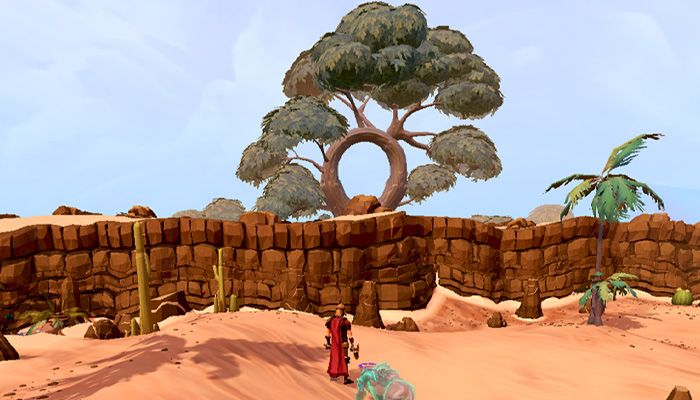 This tree looks interesting. I wonder if it means something?

So What’s The Catch?

Sounds too good to be true? Well, the catch is that this is a limited-time only mode available only to new accounts with a membership, although recently Oldschool RuneScape has also begun new Fresh Start Worlds available to all. Unfortunately in the case of Oldschool RuneScape, there are no exclusive items to earn and carry over nor are there any weekly boosts – it’s literally just a fresh start.

So why even do the Fresh Start Worlds for RuneScape in the first place? Fletcher told me simply that it was a response to player feedback they’ve received. Keatley added that they believe the seed for this idea was planted years ago while reading feedback on Reddit; one of those ‘Wouldn’t it be cool if they did this?’ kind of threads. From there it just stuck in the developers’ minds like, “Yeah? That would be cool, wouldn’t it?”

Next Down The Pipeline

Continuing my tour with Fletcher, we eventually disembarked in Lumbridge (which, interestingly enough, we did not arrive at another port but rather was spawned right in front of Lumbridge Castle) where he showed me some examples of RuneScape’s earliest quests, like learning how to cook from the castle chef. He explained that I might remember Lumbridge from the early years of RuneScape as it was the original beginning city. Sure enough, vivid memories of hunting Lumbridge’s cattle to near extinction and burying their bones to improve my Prayer skill came flooding back to me as we crossed the bridge going east towards Het’s Oasis.

In the northernmost part of the Kharidian Desert, Fletcher pointed out a massive tree in the distance that lay beyond the canyon walls. It was so large that it had curved around to form a circle. We made a beeline towards the path leading north that would take us to the Archeology Guild, home to RuneScape’s newest skill which Fletcher commented has been going over really well with the playerbase. On our way, Fletcher pointed out that giant tree again as we were rounding our way towards its front where I could see that it actually had a face! It was the Tree of Balance, and Fletcher told me that it plays host to the Druids as the site for RuneScape’s Easter celebrations. 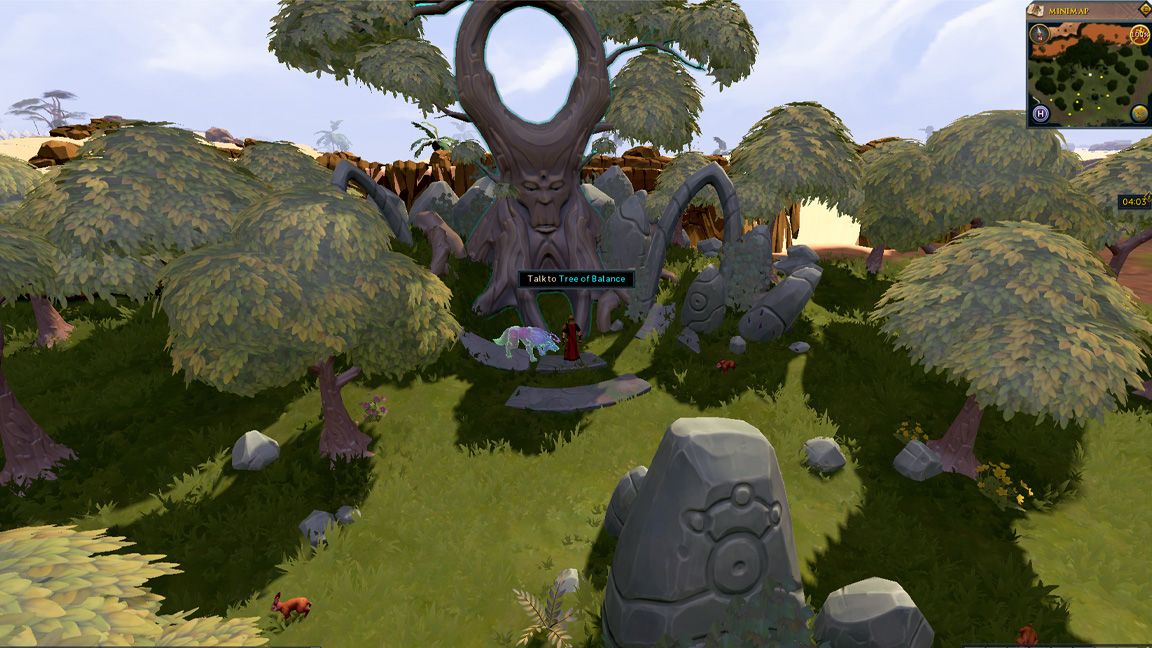 Speaking of the druids, Fletcher transitioned into speaking about some of the plans they have for RuneScape’s update next month which will focus on improving the Farming skill. They’ve noted how players don’t find Farming to be particularly fun. As such, Fletcher and the team at Jagex are looking to revamp underutilized or less popular skills in order to make them more viable, or at least more incentivized, for players to invest time into.

After recognizing the success that the Archeology skill has had, it appears that Fletcher intends to address playerbase concerns surrounding some of the lesser-used skills. He couldn’t go into details regarding the new updates to Farming, but promised that they’ll be unveiling the full-scope of changes soon. Which prompted Fletcher to lead us towards our final stop on the tour, where more immediate changes have been made.

Wilderness: Where The Wild Things Are

The Wilderness has recently seen one of the biggest changes in RuneScape all year, and arguably its most drastic change ever. It’s been relaunched with a visual refresh and has switched emphasis over from being an always-on PvP zone to now optional PvP with a new threat-based system for PvM. Fletcher spoke of how the Wilderness had become increasingly unpopular over the years due to the punishing consequences from dying there. They sought to revitalize the zone by including it as a part of the current Legacy of Zamorak story arc.

They have continued this support for the new Wilderness zone by also introducing Flash Events and two new mini-quests, with a third to come in a future update. While we were standing around in the Wilderness talking about these changes, a solo player was nearby hunting blue dragons. Because of its recent updates, the Wilderness has become a hotbed for players looking to train the Slayer skill due to it being the most rewarding and having the best enemy density. Fletcher reassured me that we were safe at our distance, but thanks to the Wilderness’s unique threat system we could tarry for too long. Otherwise, our Threat level would rise resulting in an ambush where monsters would come attack us. As much as we wanted to charge into the distance and die in glorious battle, we refrained and Fletcher concluded the tour.

Is Now The Right Time To Jump In To RuneScape?

For myself, I think the changes I’ve seen to RuneScape just in the past year show just how much Jagex is willing to invest towards maintaining – and raising –a strong playerbase. It’s fun to go back to the humble beginnings of RuneScape and see just how much has changed over the years. The Fresh Start Worlds offer an enticing entry-point for new players to get into the game, or for veterans to just start over fresh (and earn some exclusive digital trophies as well). But this limited-time mode will only last for another 11 weeks, so if you’ve ever been interested in finally getting into RuneScape there simply hasn’t been a better time.