We recently had the opportunity to interview Enplex Games for their upcoming title, Population Zero. Our conversation spanned a number of topics including F2P, player population, the survival genre, dungeons, and more.

1 – So why the survival/MMO genre? Was there ever a time where you were willing to go one way fully or the other?

We chose to fuse Survival, Exploration and MMO because we are huge fans of extensive ever-changing worlds with myriads of mysteries and discoveries, and we wanted to share our vision of how such worlds can exist and be experienced. Population Zero has been a Survival game set in Massive Multiplayer Online world with a big emphasis on world exploration since the very start of the development. Big online worlds with hundreds of players are ideal for gameplay mechanics as seen in Survival games. It challenges gamers to not only endure the dangers of the world like animals, harsh conditions, and shortage of food and water but also escape the intelligence, cunning and skill of real players. There is a moment in any survival game which all  Survival expert knows all too well. It is the instance when death from dehydration or starvation is no longer an issue. The core mechanic is overcome, conquered and the whole game stops being tight and intense. We have always desired to put players into a dynamic world and force them to learn and constantly use the rules of survival. So at the end of last year, we applied many changes to our initial concept, shaking up the formula, adding more tension and thrill. This is how the idea of week-long session gameplay was created. We think this is the way to unravel the true potential of a Survival MMO game.

2 - Can you describe the process when you realized that Free-to-Play wouldn’t work for Population Zero?

Originally, we wanted Population Zero to be a free-to-play Survival MMO with its own in-game shop with different cosmetic item: skins, unique animations, titles, medals and such. But after two years of development, we realized that our monetization model contradicted with the core gameplay concept and it would have eventually turned the game into a pay-to-win nightmare. The thing is, such a hardcore genre as Survival does not work properly as a free-to-play game. Gamers who almost exclusively play free-to-play games are used to paying for things that give them advantages. They want more powerful guns, tougher armor, faster cooldown. Their desires and habits can completely ruin a Survival game which is built upon resource gathering and conservation. We had such concerns and so did our players and testers. So we decided to make significant changes. This year Population Zero is heading to Steam Early Access as a buy-to-play title. It will offer a new take on Survival mechanics and lots and lots of exploration which is crucial to character development. No more free-to-play shenanigans.

3 - What are the elements that make this a true MMO? Is this going to be more along the lines of a traditional MMO, or is it simply a survival game you play with other people?

It depends on what you consider a true MMO. Population Zero is certainly not a typical MMO though MMO fans will find many aspects that make Population Zero relate to them: hundreds of simultaneous players, deep character development, quests, and NPCs. However taken as a whole, Population Zero is an online game for sci-fi fans, survival purists, lovers of exploration and narrative-driven games. If a player wishes to go through the week-long session alone, they may do that. But they are never safe from other players on that particular server. Nevertheless, the PvP aspect is never imposed, and Survival newcomers should not be afraid of it. We have a separate Drop Zone - a tutorial level that teaches the basics. Our loot drop is dependent on the player skill and gear rarity - the better the gear, the more chances of losing it. We have a hub area where players can meet, socialize, hang out, plan group activities, take quests. Population Zero is hard to put into the exact genre framework. We like to call it an online sci-fi survival exploration game rather than just an MMO or simply a Survival game with random server nomads.

There is only one instanced location in the game - our Drop Zone. This was included based on player feedback to have a tutorial level free of other players. We may add more, different instanced zones, if there is a large player request for more locations. That’s one of the main reasons Population Zero will launch on Steam Early Access. Every other location, region, and dungeon are open for all players on the server and ready for both competitive and cooperative play. Besides, it does away with unnecessary loading screens and queuing.

5 – The document Bill sent us has a ton of references to survival elements – can you explain what sets PZ apart from other survival games and makes this experience unique?

First, our art-direction, music, and atmosphere are very different from post-apocalyptic zombie-infested Eastern European rural areas or high-fantasy deserts and barrens. We are fans of classic sci-fi, planetary exploration, new space frontiers and we are inviting gamers to see what space colonization might look like and how it can go horribly wrong.

Second, our narrative-driven, session-based approach sets us apart from our competitors. Players will have 168 hours - daytime on Kepler - to complete a session. That is 7 real Earth (calendar) days. There are three outcomes: survive, die or leave the server. In any case, players get account experience points, more for victories, less for just participation. New Account Levels open up new game modes, mechanics and session modifiers. For instance, Building is unlocked at Account Level 4 whereas Experienced mode with more aggressive foes and more extreme dangers is unlocked at Level 3. There are seven main session objectives that will allow to repair the generator, restart the hibernation pod and save the colonist from annihilation - the ultimate session task. The whole walkthrough is very story-driven with NPCs, dialogue choices and side quests. In the end players will learn more about the planet, the crash that destroyed the colonist’s space ship after it had reached the planet’s orbit, and the truth about the whole Kepler mission.

Population Zero also has an exclusive character progression system attached to Tech-tree and the Perk systems which in turn are tied to exploration. While exploring colonists will get Research (Knowledge) points needed to acquire 4 general disciplines - Botany, Geology, Zoology and Geodesy - and unlock perks for doing common  like defeating alien beasts, mining and crafting. Unlike account progression, there are no levels in character progression, instead players choose technologies they invest in and earn perks that boost stats. Both systems allow for  . Each new session character progress is reset which opens room for creativity. No new session will be the same character-wise.

6 – How many players can you explore with at a time? Are these going to be instanced servers with limits like we see in games like ARK or Conan Exiles, or will we see a more MMO style server system with large populations?

Population Zero will have a definite number of instanced servers in North America, Europe, and Russia with around 200 concurrent players. Each unique session will last for 7 calendar days (in future we are planning to add shorter (and harder) sessions as a part of Hardcore mode). On the last day, players get notifications that their session ends soon (every hour on the last day, every 10 minutes in the last hour, every 5 seconds in the last minute). Players may choose to end the current session at any given time and choose a new one. They will still get experience points.

7 – Can you explain more about the world itself, its influences, the people in the world and more?

Earth. Not so distant future. One of the biggest corporations starts enlisting volunteers for Kepler colonization mission. Those who seek new opportunities sign up for the journey of a lifetime. Kepler may become a new home where underdogs, dropkicks, and failures may fulfill their ambitions or have a new, fresh start. Having recruited enough volunteers, the corporation sends the space freighter to Kepler 438b in Lyra constellation where it crashes on-orbit. Few colonists survive when the ship’s AI sends them to Kepler’s surface in their hibernation pods. Players take control over an unnamed colonist of unknown background or origin. After the colonist wakes up from the long sleep, he later learns that there are only 168 hours left before human extinction. Out of the frying pan into the fire.

8 – Why did you decide on a central hub system in Population Zero?

The Hub is the key area on Kepler. If on Earth all roads lead to Rome, on Kepler they lead to the Hub. It’s the place where players meet other players and NPCs, socialize, get quests, store gear, and resources, and resurrect after an unfortunate demise. The Hub will let players feel that they are a small but very important part of the mission as quest completion might reward them with machine-tools, and living quarters. This way the Hub is changed, improved. Besides the generator that is crucial to the colony’s survival, and has to be repaired, it is located in the Hub. So, the Hub is not only a key location but also has an important place in the story. It also has an awesome look being the remains of Artemis, the space ship which brought the colonists to Kepler, 460 light-years away from Earth. 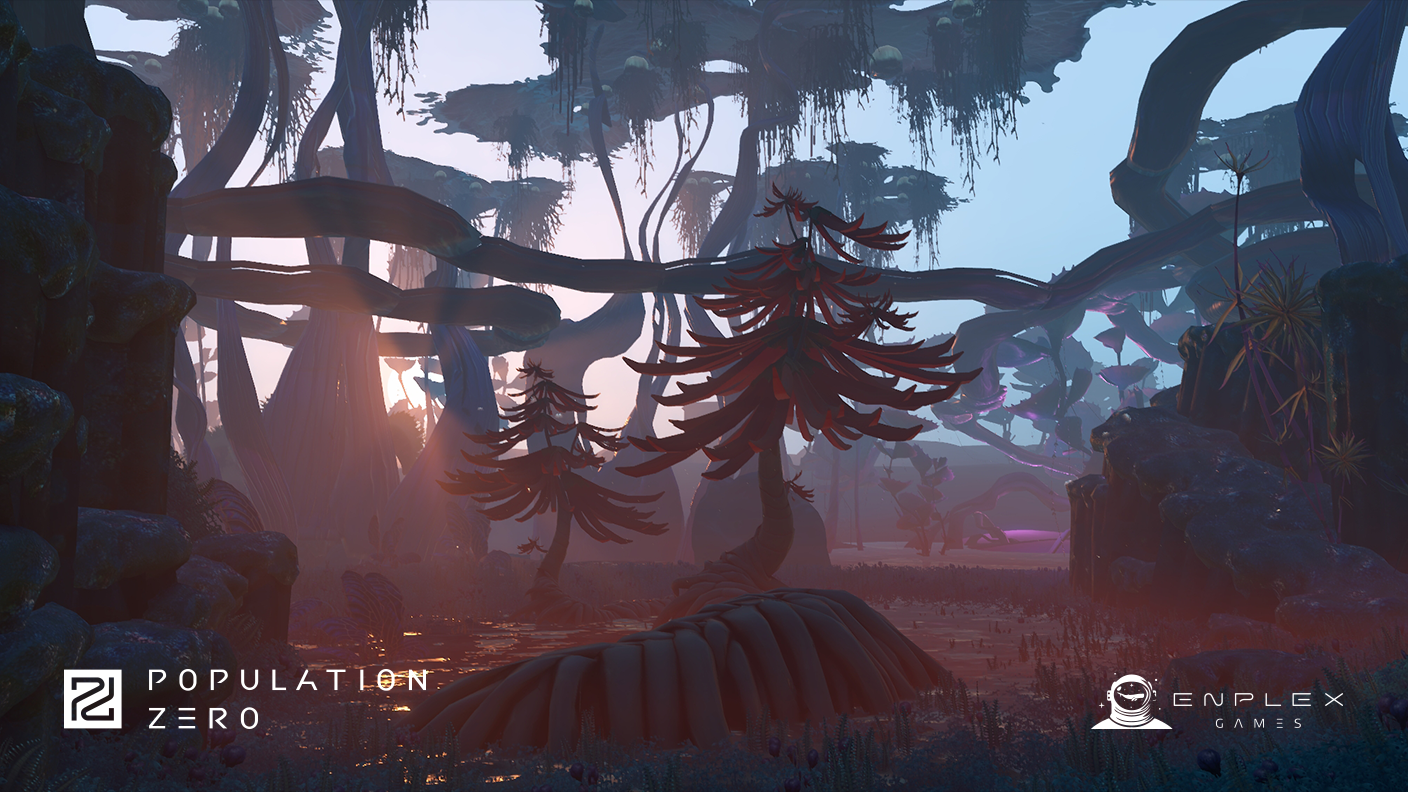 9 – I’m really enjoying the art style of Population Zero. Can you elaborate more on the style and influences behind the art?

As I mentioned earlier, every member of our team is a huge sci-fi fan. We love good science fiction flicks like Arrival, Ad Astra, Interstellar. We are avid sci-fi readers losing ourselves in the universes created by Arthur Clarke, Isaac Asimov, Clifford Simak, Robert Heinlein, Harry Harrison, Ursula Le Guin. Our visuals are very reminiscent of sci-fi books’ cover art of that era. Think artists like Jim Burns or Stephen Youll. Our atmospheric musical score further deepens the feeling of unbelievable discovery, boosts imagination and sends conscience across the Universe warping space-time.

10 – Can you go into more detail about the Seven-day loop? What is the motivation behind that mechanic?

Unlike most Survival games with an open-ended structure that are often criticized for the lack of focus and a clear objective, Population Zero presents players with a clear goal, a win condition and a variety of rewards. We do not want the players to roam the planet aimlessly, searching for ways to continue having fun and bring meaning to their play. Time becomes a valuable resource. They will have 168 hours to survive through the story, live or die (the third option is to leave the server). This approach adds much-needed tension and excitement to the genre that is becoming oversaturated with survival sandboxes. Players will still be able to do things they enjoy in Survival games, but in Population Zero everything has a cost and ultimate consequence. Besides, the account progression will spice up the game offering new modes, session modifiers, and mechanics. No new session will feel the same.