On October 13th, Neverwinter released the third Milestone in their ongoing Avernus campaign named The Redeemed Citadel. When Avernus released, the team over at Cryptic Studios sat down to talk with us about the expansion, and now that this new Milestone is available, in this exclusive interview, we had a chance to talk with the team about what players can expect out of the new three star Hunt Mark, and their brand new Heroic Challenge “Ensnared”.

MMORPG: Hey guys, thanks so much for coming back to talk with us. Now that the third Milestone of Avernus' campaign The Redeemed Citadel is available to players on PC, is there an estimated timeframe for when console players might expect to see this content?

Asterdahl, Systems Designer for Neverwinter: Milestone III of The Redeemed Citadel will be available for console players starting November 10th.

MMORPG: Console players won’t have too much longer to wait then! How far along in the Citadel's reconstruction must players get before access is opened to the new hunt marks? How about access to the new Heroic Encounter ‘Ensnared'? Asterdahl: The three-star hunt mark and the Ensnared heroic encounter will both unlock when Milestone III is completed. In other words, when the players fill up the meter for Milestone III, that content will unlock immediately.

MMORPG: That’s good. No one likes having to wait once the meter fills up. Milestone III comes with new hunt marks, including a three-star ranked giant bone charcoal devil named Nightspine. How can players find/engage this particular mark?

Asterdah: Just like with the previous 1-star and 2-star hunt marks, they’ll need the correct lure. Nightspine’s lure will require the trophies from all 3 of the 2-star hunts, and then the player can trade those trophies for a lure at the Citadel.

MMORPG: Okay, so nothing too out of the ordinary there. We hear that Nightspine is an acidic creature, but can you tell us what sort of attacks and obstacles players can expect to deal with when battling this demon?

Asterdahl: Nightspine’s claws and stinger are tipped with acid that builds up overtime, eventually exploding and spreading to anyone nearby. The bone devil is also capable of creating puddles of acid that explode after a delay, and these puddles can spread the effect as well.

While the affliction can be cleansed, if you or your teammates are careless, the fight could end with an abrupt chain reaction.

MMORPG: Oh no, I’m having flashbacks from way too many other games where I’ve died repeatedly to mechanics like that. Give your healers an energy drink before challenging this guy! So let’s move onto the most important question: What type of loot can players look forward to getting from this encounter? Any unique visual gear or set bonuses?

Asterdahl: Absolutely, his signature drop, the Bone Devil’s Ribcage features the much sought-after Butcher’s Might perk, which grants stacking increases to your power whenever you hit with a powerful attack. You’ll also be able to reclaim a number of pieces of equipment belonging to angels slain by Nightspine, featuring other desirable perks. All of that equipment will be item level 1250.

Seeing as it’s quite a bit of work to obtain the lure for Nightspine, and it’s a difficult fight: multiple pieces of equipment are guaranteed to drop. Along with the item level 1250 armor, shirts and pants ranging from item level 1225 to 1325 will drop as well.

MMORPG: It definitely sounds like the reward is worth the effort. So let’s shift gears and talk about Ensnared. What can you tell us about this new Heroic Encounter?

Asterdahl: Zariel’s forces have captured a high-ranking pit fiend and are attempting to move him to the celestial plane to stand trial. At the last moment, before making it to the portal chamber, devils attack the Citadel.

This will be a large-scale heroic encounter, taking place on the balcony of the Citadel. You’ll be facing off against a horde of demons alongside Zariel’s forces in order to stop the devils from freeing their captured comrade.

MMORPG: Epic. Are there any unique gameplay mechanics that this fight might have that aren't found elsewhere in Neverwinter?

Asterdahl: While there’s no totally new mechanics this time around, Ensnared will feature some hidden bonus objectives that increase the rewards for everyone participating.

MMORPG: Increasing the reward is always a plus, so tell us about the loot! Are there any loot drops specific to this Heroic Encounter? 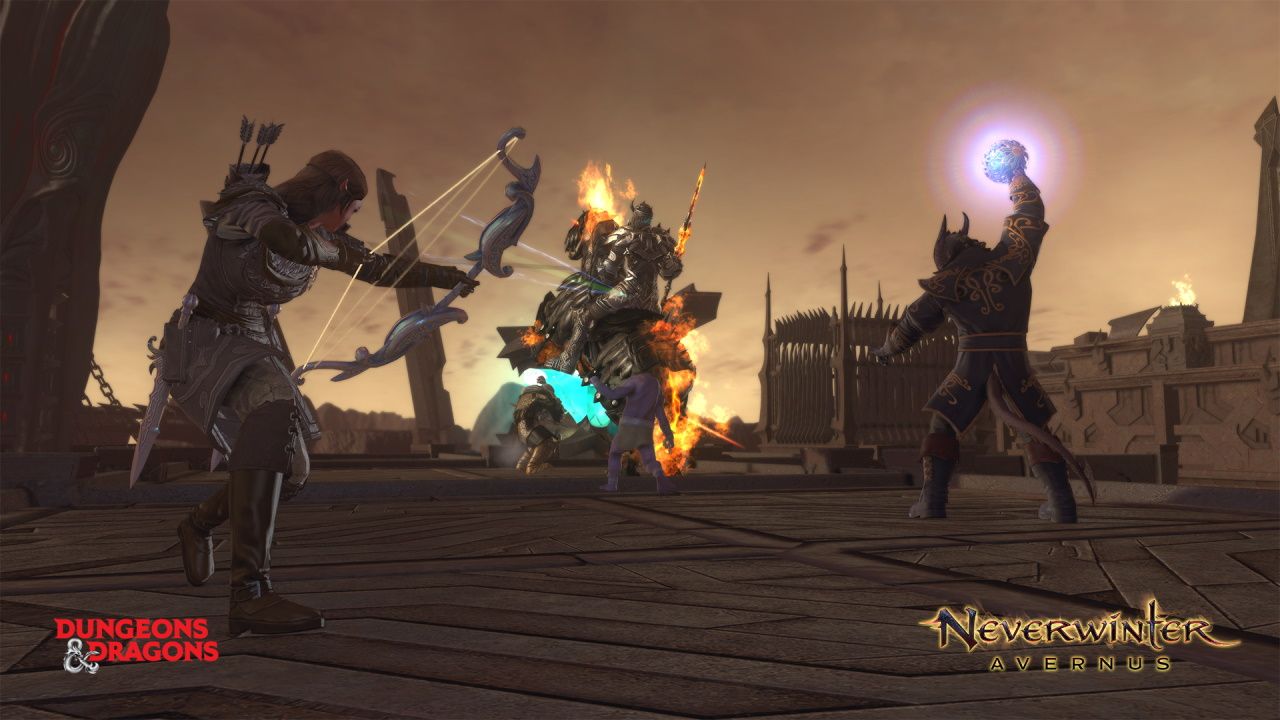 Asterdahl: Rather than any specific new loot, Ensnared offers a second large scale heroic encounter as an alternate way to earn loot, including a large amount of Zariel’s favor. And since this encounter takes place right on the citadel balcony, it’s convenient for those trying to earn favor now, or when Milestone IV goes live.

MMORPG: Is there anything acquired from this fight that lets other players who encounter them in passing know that they've conquered Milestone III's most formidable challenges? You know people need to show off their achievements!

Asterdahl: While players should expect Ensnared to be along the lines of other large heroic encounters in difficulty; Nightspine the 3-star hunt mark is a large step up in difficulty from 2-star hunts. With Nightspine there are definitely some unique pieces of equipment you can’t see anywhere else that you can show off. The Bone Devil’s Ribcage body armor is particularly noteworthy; its twisting black spines are sure to stand out.

MMORPG: Oh man, that sounds sick! I’m a big fan of gear that looks menacing so I can’t wait to see what this armor looks like in game. Thanks for taking the time to talk with us Asterdahl, and thank you to Cryptic Studios and the Neverwinter team for the opportunity to provide this look into Milestone III to our readers!

How are you guys progressing through The Redeemed Citadel? Have any of you encountered Nightspine or checked out the Ensnared encounter yet? Let us know in the comments below!