On February 9th, the team from Cryptic Studios will release Sharandar, the latest module for their MMORPG Neverwinter. We sat down with Randy Mosiondz, Lead Designer for Neverwinter to learn about the return to the lands of the Iliyanbruen Elves and the struggles in New Sharandar.

MMORPG: Welcome back! If I remember correctly, Sharandar was the land from the first Neverwinter module, Fury of the Feywild. What made the team decide to revisit Sharandar after all this time?

Randy Mosiondz, Lead Designer for Neverwinter: Fury of the Feywild was the very first of our campaign modules, released back in 2013. We thought it would be a good time to start refreshing some of our earlier content, updating the visuals, gameplay, and campaign format to match the aesthetic of our more recent releases.

MMORPG: Sharandar is set to be a three episode module. Are we to assume these will be released like the milestones were in Avernus or do these episodes have a tentative release date scheduled?

Randy Mosiondz: Sharandar is following a slightly different release format than Avernus. Previous modules had a larger initial release, with follow-ups coming much later. As we move to more of an episodic release structure, we’ll be releasing the content on a more regular cadence. We haven’t announced release dates on the latter episodes yet.

MMORPG: Episode 1: The Iron Tooth will kick off the Sharandar module on February 9th. Can you tell us about the Ruins of Malabog and what sort of challenges players will be facing here?

Randy Mosiondz: Having defeated Malabog’s armies, the Iliyanbruen elves of New Sharandar enjoyed a brief period of peace and a chance to rebuild (time works differently in the Feywild!) However, some of their people traveling the Ruins of Malabog have gone missing, and brutish creatures have been found lurking there once again. Elven scouts have reported signs of small fey and giantkind, remnants of Malabog’s forces, moving in warbands through the forest. What’s more, the skies of Sharandar have been warped from the usual Feywild twilight to dark and twisted versions through some powerful magic.

MMORPG: The Iron Tooth’s story sends players on an investigation to find a missing elven dignitary. Is this a character players will be familiar with or an entirely new character?

Randy Mosiondz: The character is new to the story, an up-and-coming elven diplomat with hopes to establish peaceful relations with the dwellers in the lands around Sharandar. However, like so many things, the best laid plans often go awry… 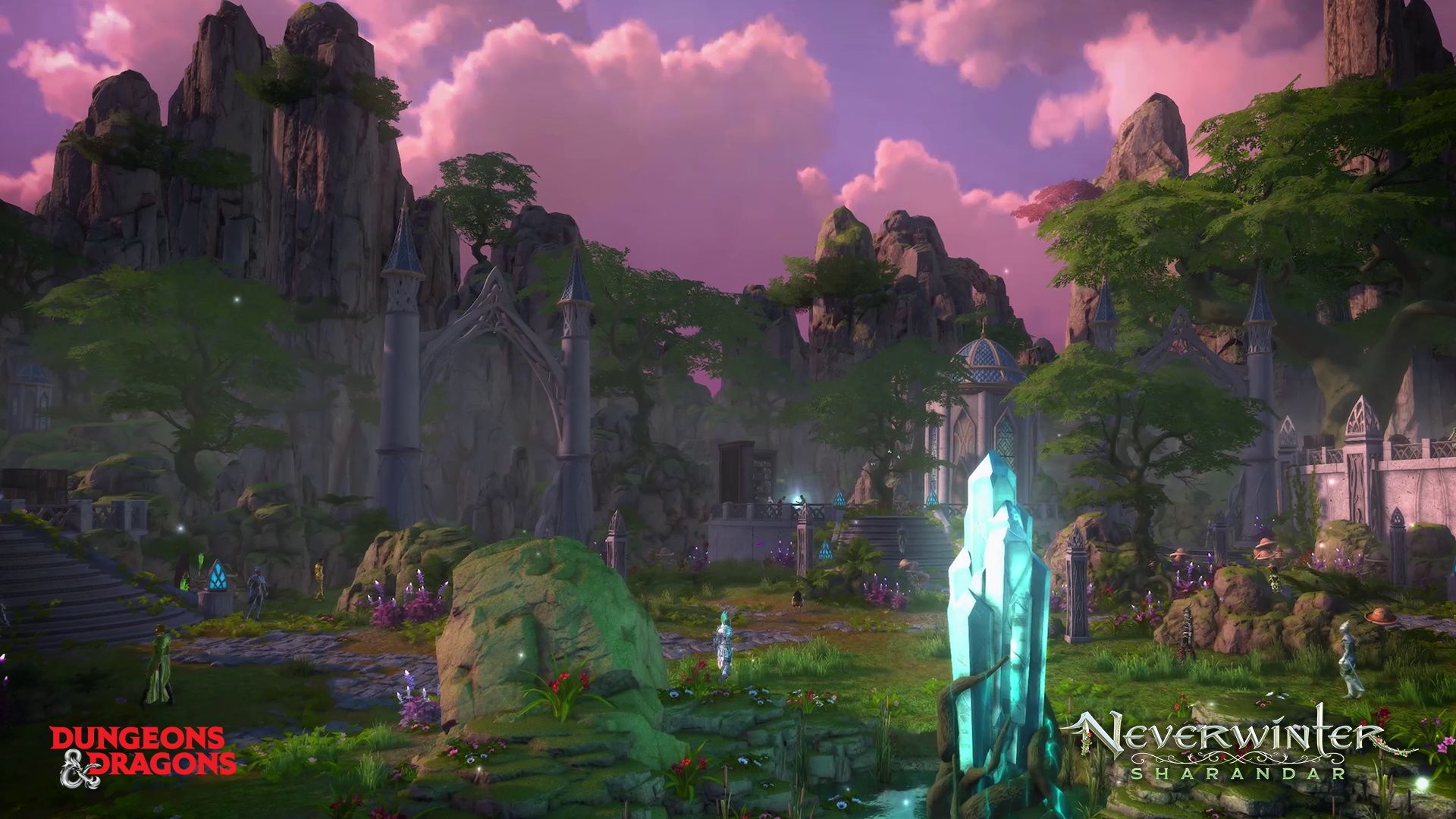 MMORPG: What can you tell us about this new dungeon The Vault of Stars?

Randy Mosiondz: The new dungeon is set within the Gloaming Court, a place of power for the unseelie fey deep within the Feywild, ruled by the Queen of Air and Darkness. You must travel there to obtain a rare magical item used to defeat the new threat to Sharandar. But the courts are guarded by powerful guardians and magical traps.

MMORPG: Is The Vault of Stars where we get to kill whoever the hell that creepy dude in the trailer with the skulls all over him is?

Randy Mosiondz: The “creepy dude” is actually one of the main threats you face within the lands of Sharandar itself! It’s an ancient archfey seeking to overthrow the Iliyanbruen elves and seize the source of their power.

MMORPG: Are there any unique appearances for loot in Sharandar?

Randy Mosiondz: All the Dungeon gear are new costumes as the highest item level. There are also new FX transmute rewards in the Sharandar campaign rewards.

MMORPG: As someone who mainly plays games on consoles, it’s great to see an announcement for when the console launches will happen. Is everything still on track to release on March 9th?

Randy Mosiondz: As long as we don’t run into any issues, that is still the planned release date for Sharandar on console.

MMORPG: What can you tell us about the New Sharandar social hub?

Randy Mosiondz: The Illiyanbruen elves have had some time to rebuild this area, transforming into a haven for Feywild travelers from Neverwinter Wood and fey creatures from the surrounding lands. The Arcane Reservoir is still one of their greatest treasures they protect, watched over by the Arcane Collective. The elves still maintain portals to the other areas of Sharandar, although most have been shut down until they can safely re-open them.

MMORPG: Finally, looking forward through Sharandar, all we have are the names of the next two episodes: The Soul Keeper, and The Odious Court. Those are both fairly ominous names, and we can only assume there’s at least one big hunt on the way. Any tidbits or sneak peeks you guys wanna drop for our readers or do they have to wait just like everyone else?

Randy Mosiondz: The episode names allude to the nature of the major threat represented in each one. As I mentioned earlier about The Iron Tooth, the main enemy you’re facing there is an ancient archfey. The Soul Keeper alludes to a new threat, something related to the archfey, but from another plane of existence. The Odious Court introduces the final threat and culmination of the Sharandar story arc. We’ll be providing more info as we get closer to each module's release. We hope everyone enjoys it!