MapleStory is a side-scrolling, 2D MMORPG. It has been thriving for years and stands out as a unique take on the genre. Developed and released in South Korea back in 2010 the game has since gone on to be localized in several regions and has enjoyed success as a global title.

MMORPG: What have been some of the greatest challenges and successes with producing and maintaining MapleStory for over 10 years?

Production Team(PT): Keeping the game fresh is one of the biggest challenges for a title that’s been live for so long, right. Although we have been maintaining MapleStory for more than 15 years, our game is constantly evolving and I believe this is one of the key reasons why our players still get excited with every new update.

One of the main challenges is keeping the balance between what players want and what we have to do, from a long-term perspective, to continue to keep the game fresh. So we’re always trying our best to communicate with our players and share our direction. We’re very lucky to be working for this long with the support from MapleStory players and really attribute the positive response to the team working behind the scenes to make it all possible.

MMORPG: How have you, as a production team, continued to pivot and evolve the game to the ever-changing gaming culture? What are some of the philosophies that you hold to as a team that has helped you navigate Maplestory’s production over such a long time? What have been some of the biggest shifts in how you produce content for MapleStory over the past 10 years?

PT: Our core belief is that the game should always provide players with excitement and fun. We’re always striving to do this by maintaining the non-stop updates, adding new exciting events, and content. From my perspective, I believe that MapleStory is continuously evolving through time, especially with the enormous effort of all the people who are working for MapleStory. 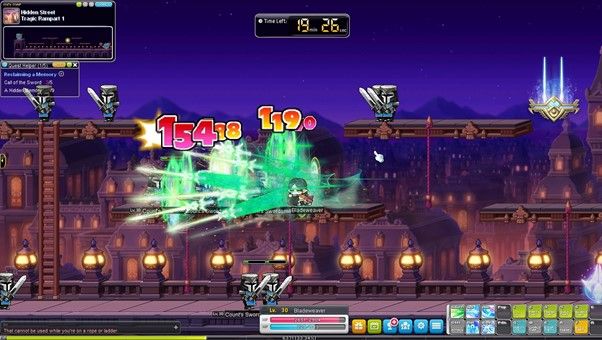 MMORPG: You just warped up a successful virtual conference with a pretty exciting announcement in the form of the Awake Content update. What are a few of the features that you’re most excited about with the release of the new Content?  What have been some of the most challenging aspects of introducing this new content? (e.g. balancing jobs, specific mechanics, working in new lore, etc.) What part of the new Awake content is the team most proud of?

PT: From December 16 with the Awake: Flicker of Light update, players will now be able to create a Zero character in Reboot World. This is one of the changes that many of our Reboot players have been waiting for and one of the most exciting new contents for our team as well.

Implementing the 5th job skills for all classes has been one of the most challenging parts of the update for our team as we have to make sure that all the new skills are working well with the existing content and as intended.

We’re very proud of the Awake update, but we’re especially proud of the new Legion Arena and Sharenian Knights episode. Players will now be able to battle with others in the Legion Arena, a new mini-game, leveraging their legion of characters. Players can also engage with a new storyline with the addition of Grand Athenaeum Episode 6: Sharenian Knights. I won’t spoil it, but it’s a really captivating story that opens a new chapter of Maple World’s history!

MMORPG: One of the areas that were highlighted were some of the quality of life changes coming later this month some of which were impacted by player feedback. As a producer, how do you balance game direction and vision with player feedback and critique?

PT: I believe that balancing game direction and player feedback is one of the most challenging jobs, but a very important thing to do at the same time. We’re always trying our best to listen to our community, but we also have to figure out what is needed to maintain and improve the game balance. A part of that is working very closely with our community managers and data analysts to come up with the best plan for our players to keep a good balance.

MMORPG: Coming back to the MapleStory Fest, what were some of the most unique aspects of planning a completely online games conference for your fans?

How much did it differ from planning a conference any other year? What were some of the hurdles that the team overcame while planning the event?

PT: The pandemic threw a major curveball in planning this year’s MapleStory Fest. In the last two years, we were able to celebrate with Maplers in one place, which really reinforced the feeling of community.

The unique challenge this year was to deliver that same feeling, but digitally. Because of the virtual nature of the festivities, we wanted to ensure we provided Maplers with a full and entertaining program. In the end, we loved seeing players come together online and were so excited this year’s festivities made it easier for fans around the world to join in and be part of the event through our quizzes, contests and community video.

MMORPG: Moving into the new year how is the team ramping up to continue to move the game forward into 2021?

PT: We certainly have content updates in the works for 2021. With a game like MapleStory, which has been going strong for nearly two decades, we always strive to offer players new missions and adventures to keep content fresh. The Awake content update is a massive addition that will take players through to the new year, but rest assured, there’s more to come!

Thanks so much to the Global Production Team for taking the time in this busy season to answer our questions. The latest update, Awake: Flicker of Light, is now live and offers a host of new content, quality of life changes and some ongoing events. Be sure to keep it loaded to MMORPG.com for the latest on MapleStory and all things MMO.