Neverwinter's Temple of the Spider has seen a revamp alongside today's launch of Northdark Reaches, the latest module in the MMO. The dungeon is part of an ongoing effort to revamp and retool some of the older content in the MMO and give it new life with players exploring the world of Faerun. Today's update, Northdark Reaches, takes players are exploring a new area of the iconic Underdark, with a story that was written alongside one of Dungeons & Dragons most celebrated authors, R.A. Salvatore, and his son, Gene.

The new, revamped dungeon doesn't just see some new visual flairs, but significant changes to the content that will give it a fresh look for veteran players returning to the Temple. We were able to chat with Cryptic Studios' Narrative Director Winter Mullenix, Systems Designer Michael Lynch and Art Director Christopher Frenton about the revamp.

This isn’t the first time Cryptic has revamped an older dungeon - what have been some of the challenges in choosing the dungeons to revamp and how to make them better, as well as improving on previous revamps?

Michael Lynch, Systems Designer for Neverwinter: One of the biggest challenges is finding opportunities to expand upon the mechanics and powers of existing bosses. We try to maintain as much of the identity of the fights as possible to give a sense of familiarity, but we also want to challenge players in new ways with those recognizable elements incorporated into a brand-new experience. Sometimes we manage to leverage what’s already built and other times we feel that a certain boss needs to be scrapped to make room for a new one. 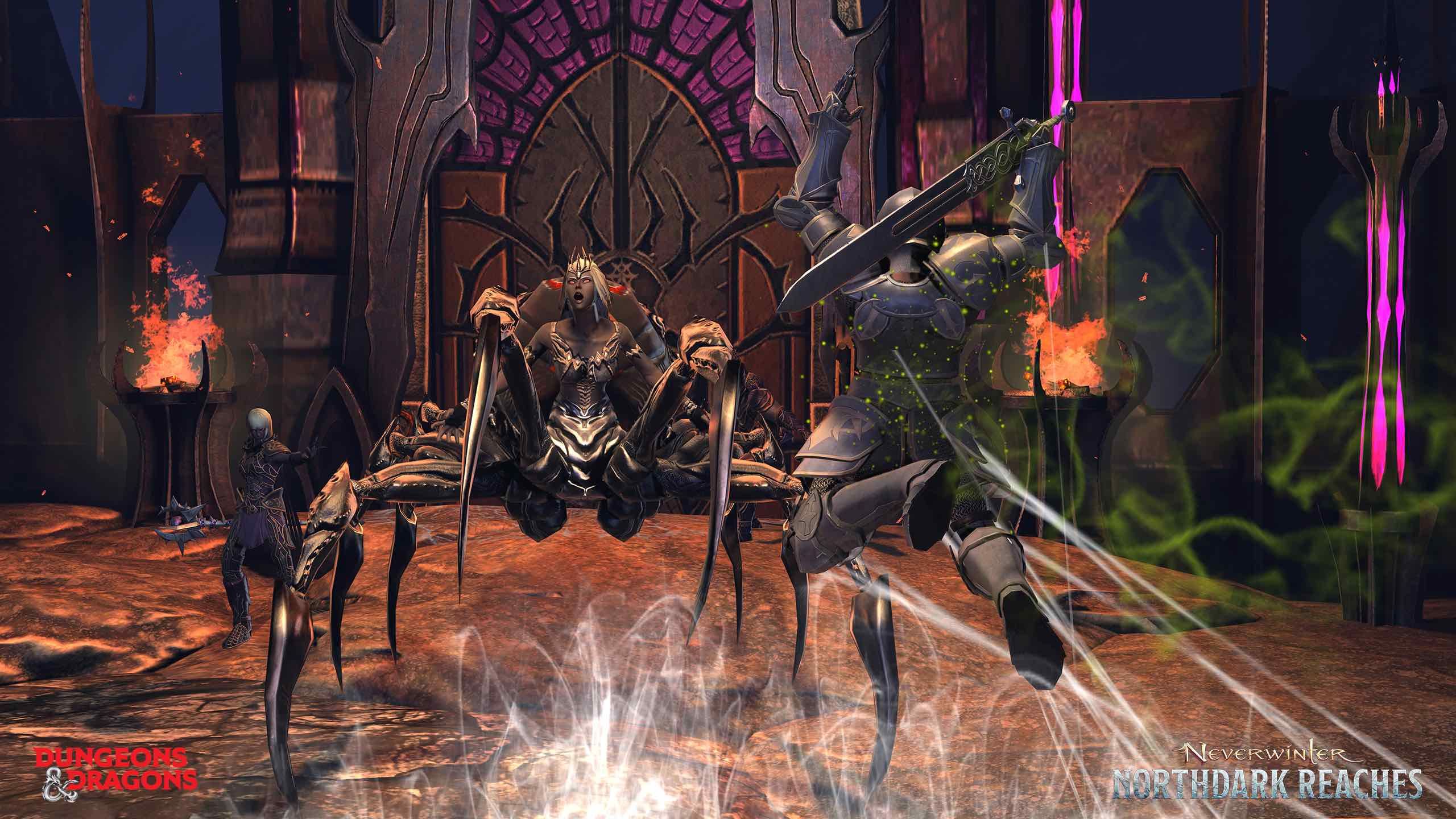 A major change we've done recently is provide two difficulty options for new group content. This creates extra challenge in hitting the right target for both of those audiences since there’s a large gap between our highest skilled players in comparison to our casual player base. We do a lot of testing with players in Closed Alpha and Preview to better improve on finding the right challenge level for both difficulties.

With the theme of the upcoming module, Northdark Reaches, it makes sense that the revamped dungeon be Drow-themed. Temple of the Spider doesn’t just add new challenges, but also new story updates. What was it like writing these additions, and how did you approach that process?

Winter Mullenix, Narrative Director for Neverwinter: The lore surrounding the trial's previous iteration did not explore the political intrigue of the Underdark. The Northdark Reaches update features an actual Underdark adventure zone with the aforementioned intrigue, so we had a unique opportunity to deepen character stories relative to that. We started by deciding on the delivery vehicles for the story content, ultimately landing on lore entries and dialogues that don’t interrupt the active gameplay experience. We then leveraged the unfolding regional story of the Northdark Reaches. 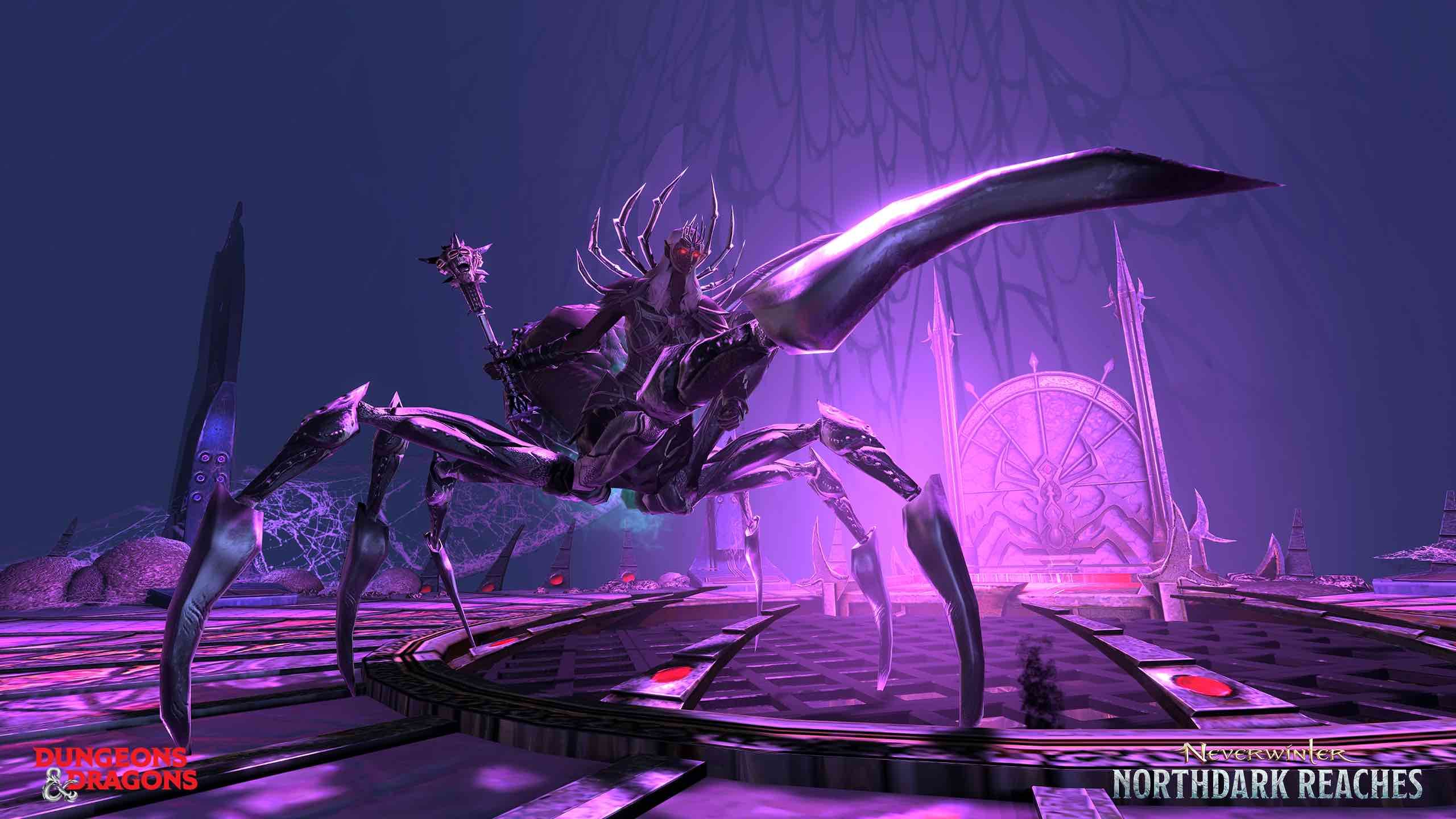 You don’t see too many “good” or “redeemable” Drow in the Forgotten Realms. How was creating the character of Syndryth and making her a Drow worth saving? What was it like exploring this much-loved race’s history and turning it somewhat on its head with a Priestess of Lolth herself being revealed to be a Secret Moondancer? Was this a matter of taking an existing boss and creating a new motivation for entering the temple?

Winter: To me, this really speaks to the beauty of the Underdark setting. It is thematically dark and mysterious, but the eternal struggle is every bit as nuanced if not moreso. There are many drow who prefer the Dark Maiden Eilistraee over the chaos wrought by Lolth, but they tend to hide their agenda. Lolth casts a big shadow, and defying her comes with significant consequences; portraying Syndryth as a brave individual who resists Lolth’s chaos allowed us to really lean into the implications of Lolth’s punishment of drider form.

The Temple isn’t just bringing new difficulty modes, but also new bosses. Can you talk a bit about the approach to the new boss encounters and ensuring that they fit in the existing content people already loved?

Michael: From a design perspective, our goal in creating a dungeon experience is to challenge the players in unique ways at each boss encounter. What we were trying to accomplish is to have mechanics in each fight that pressured the group on different vectors. Specifically for the new boss, Da’Zora Mizzrym, we were looking for a way to get the healers more directly involved in the fight mechanics which would give them a pivotal role in the group’s success beyond keeping their allies alive.On the story side of things, the motivations for entering the dungeon were altered and the new boss is a centerpiece for that change. The catalyst for this pivot was that we really wanted to explore a certain type of drow ritual as part of the fight. We knew that we needed a priestess boss and then it was a process of determining what sort of elements would fit to make that an engaging encounter. In that regard, we are prepared to change things where necessary to provide a better experience, but we also try not to rock the boat too much and disturb what players enjoy and their fond memories of the content. 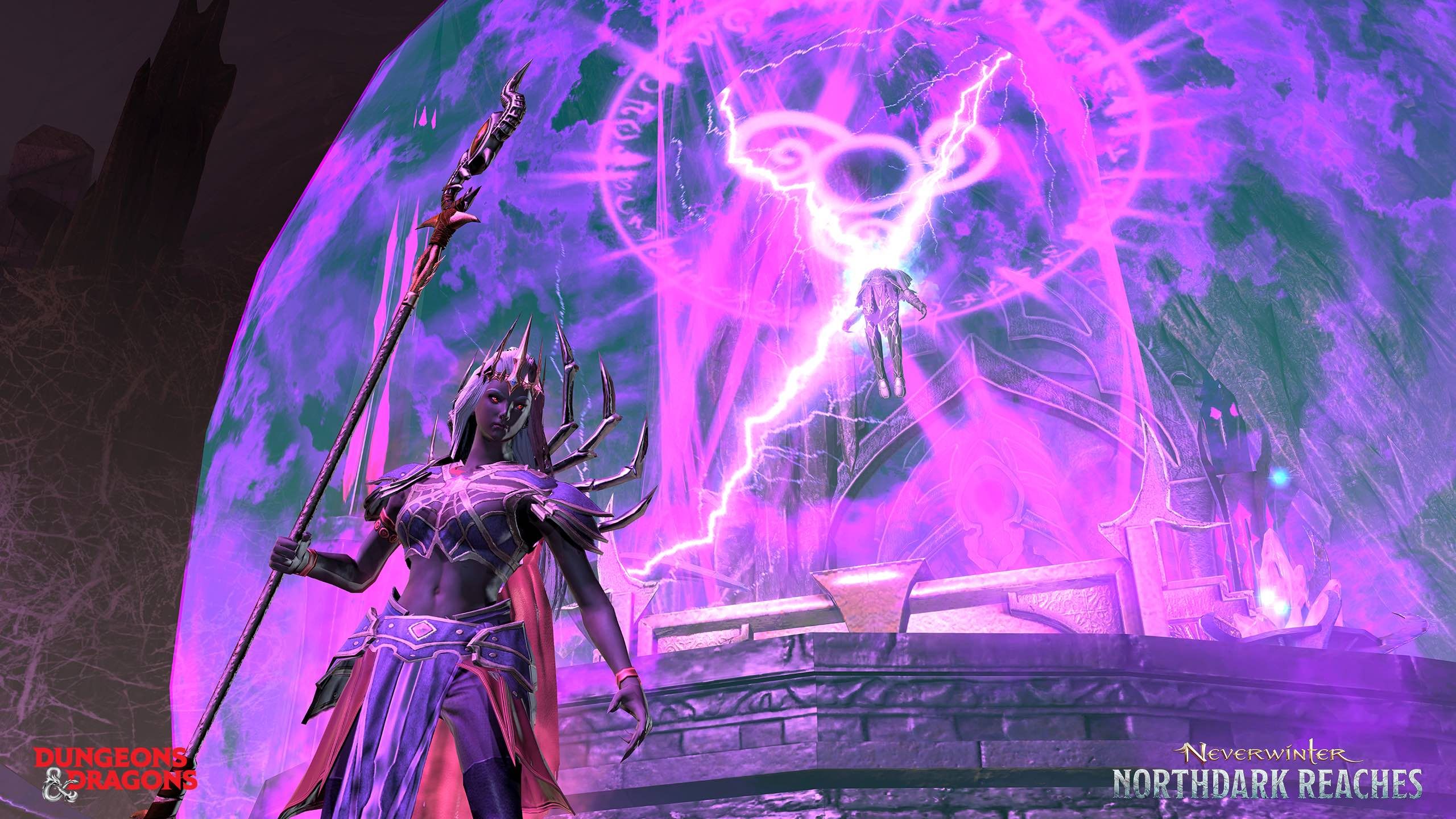 Visually, the dungeon is getting some facelift touches. This is in keeping with the last few module drops that saw new visuals added to the game or revamped old ones. What, visually, did Cryptic revamp with the temple?

Chris Frenton, Art Director for Neverwinter: Temple of the Spider already looked pretty good so the visual changes to the environment were minimal. We updated the lighting and polished a few areas here and there to add to the sinister atmosphere.

For those players who have been keeping track, this is the second time that Cryptic Studios has collaborated with RA Salvatore. What is it like to work on a story with someone who has written such a large chunk of Faerun’s stories many of us (myself included) grew up reading?

Winter: Collaborating with R.A. Salvatore and Geno Salvatore was an utterly brilliant experience. The two of them are fantastic writers with a strong sense of pacing and tone, and R.A. Salvatore’s accomplishments speak for themselves. I had actually known the two of them for many years but I never anticipated we’d have an opportunity to work on something together. When Randy, our Creative Director, told me that we’d potentially be collaborating on Neverwinter again, it was pure serendipity! There I was, finally getting a chance to work with an author I’ve admired for many years. It caught me off guard, but in the best of ways – our creative goals aligned immediately and we created a truly compelling story as a result. Frankly put, it was an experience I wouldn’t trade for anything. 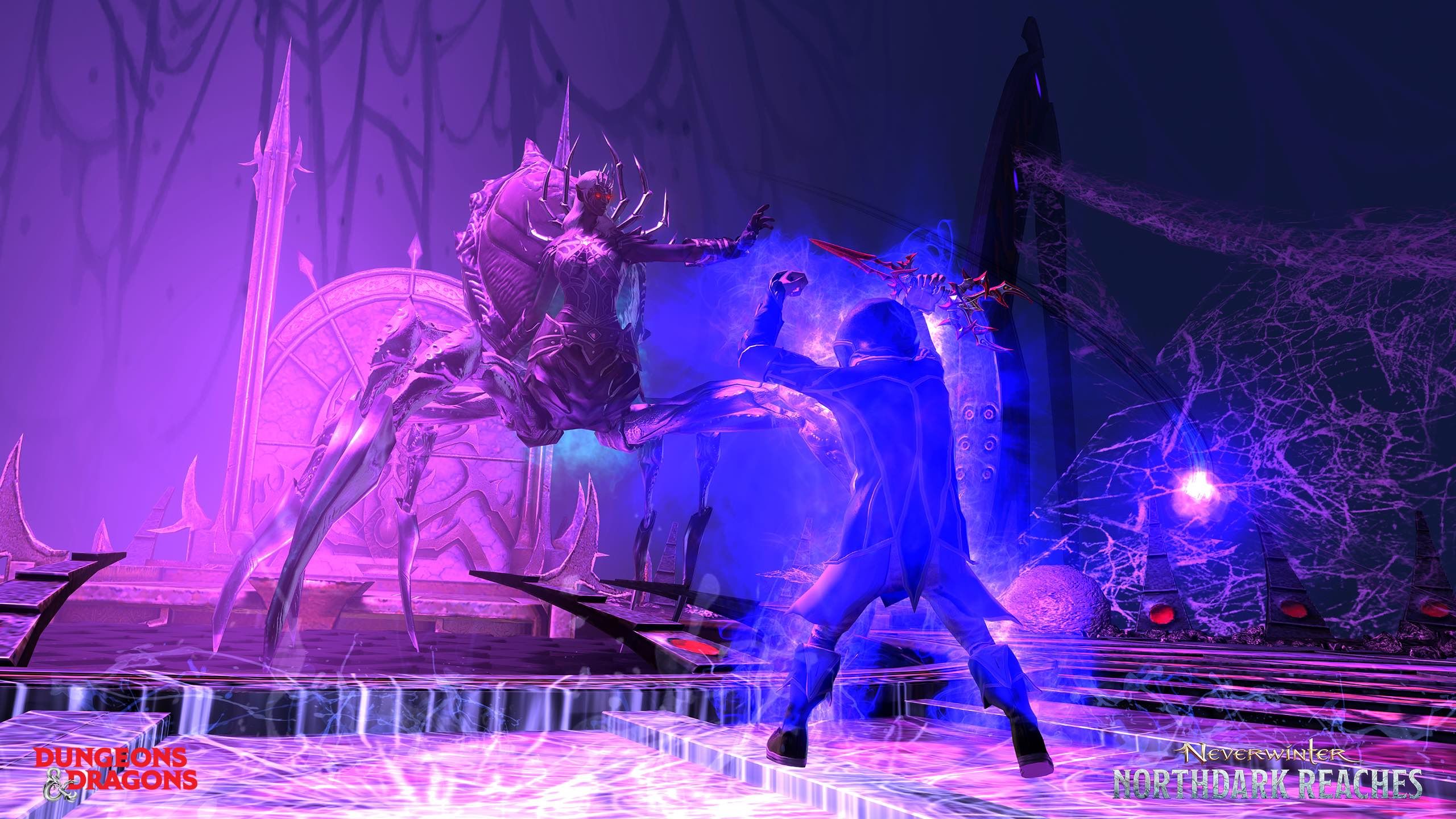 What kind of rewards can players expect to earn when running through the Temple of the Spider, and is there any real incentive for doing the content ton Master Difficulty other than just bragging rights?

Michael: There are unique rewards on the Master difficulty such as a new artifact set and mythic rings. It is also the case that all of our queued content has higher drop rates for Premium Loot at higher difficulties.

Bragging rights are certainly a motivator for some though and those players can complete all of the Master difficulty achievements for a unique transmute and title.

How does the Temple of the Spider fit in the larger narrative of the Northdark Reaches? Is this going to be something that the story naturally takes you to, or will it be just a nice, fun addition to do some group content with friends?

Winter: It is a side story that frames Lolth’s curse against the growing struggle within the Northdark Reaches. To avoid spoilers, I won’t share more details... but we hope players enjoy this new side story and dungeon crawling in the Temple of the Spider!