Neverwinter is set to release Sharandar’s second episode: The Soul Keeper soon, and with it comes a new Heroic Encounter named Waking Nightmares. In this new encounter, players will work together to free trapped adventurers from a swarth of undead before facing off with The Keeper of Nightmares. This time we sat down with Noah Holmes, Senior Game Designer of Neverwinter, to hear more about this encounter and the planning process behind these events.

MMORPG: Hey Noah! As always, thanks for taking the time to speak with us about Neverwinter! The last time we spoke with the Neverwinter team, Randy Mosiondz told us about the recently released episode: The Iron Tooth. Could you give us some info on the second episode: The Soul Keeper?

Noah Holmes, Senior Game Designer for Neverwinter: I would be more than happy to! The Iliyanbruen elves are on edge now that adventurers from Neverwinter have exposed the true threat behind the Bashin’ Ordur in the Ruins of Malabog. Having routed the threat in Episode 1: The Iron Tooth, adventurers turn their attention to the old Blighted Grove. The blight has receded, yet a new dark cloud has descended upon the forest and taken hold. One-by-one graves long silent have been exhumed, with Eladrin-once deceased-now walking as mindless undead. Iliyanbruen scouts that ventured into the grove speak of a nameless horror that drains the life energy from any living thing it touches. Adventurers are once again needed to assist Merrisara and seek out these new threats. Adventurers venturing into the Mended Grove disappear, often taken as prisoners by the Keeper of Nightmares, the boss encounter players will face when completing Waking Nightmares, our newest Heroic Encounter introduced in Episode 2: The Soul Keeper.

MMORPG: Not everyone who is reading might actually be playing Neverwinter right now, so for the benefit of players who aren’t familiar with what Neverwinter’s Heroic Encounters are, could you briefly explain what they are? How do they compare to something like Fates from Final Fantasy XIV or, since I know that you’ve both previously worked on Rift, world events?

Noah: As a departure from the other systems in RIFT and Final Fantasy, the Heroic Encounters in Neverwinter not only serve as an additional fun activity for players, they also exist to tie the evolving world episodic story to the main story of the entire module. Think of them like the shows Wanda Vision, Luke Cage or Marvel: Agents of Shield where you have these interesting side stories that are tied directly to the Marvel Cinematic Universe and serve to fill out what is happening in the world around the blockbuster films in the theater. These Heroic Encounters are repeatable story elements that are part of the main overarching story for the campaign. Speaking about mechanics, Heroic Encounters are random quests that appear at various locations within the Feywild, each featuring unique encounters. These encounters, or “hotspots”, are displayed on the map and feature different challenges. Some encounters will task you with defeating foes, using temporary magic powers or interacting with interesting scripted objects. Other quests will task players with defeating powerful and iconic creatures like Oni and Dryads; with the more challenging Rank A encounters requiring more than one party. 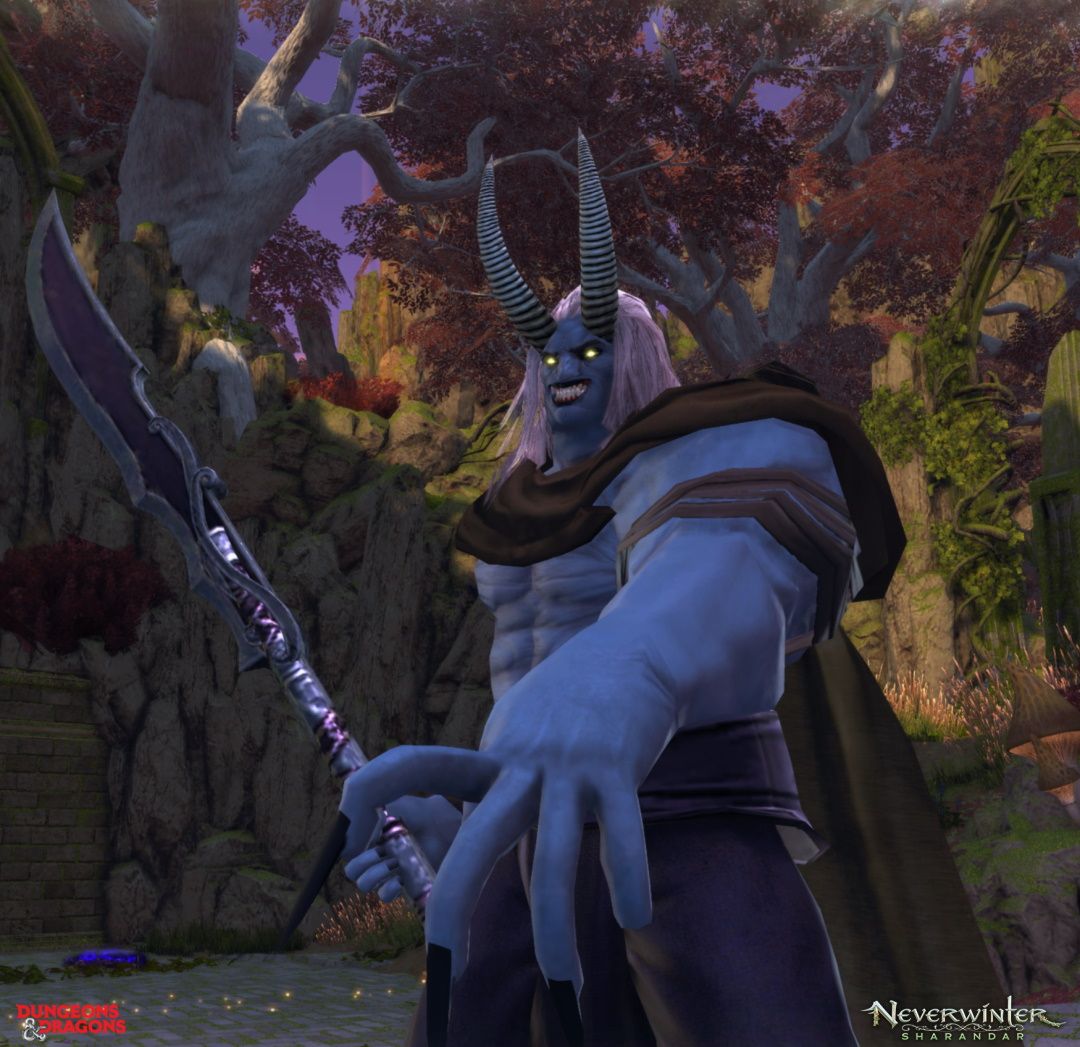 Heroic Encounters will cycle through various difficulties spawning at different times. The encounters that require fewer players will spawn often throughout each neighborhood, while the more difficult and rewarding quests will appear every 15 minutes. Upon successfully completing an encounter, players will be rewarded with Seals of the Wild, which can be traded for Crone's gear. This new armor is actually in the game now and can be collected! In Episode 2, players will be able to obtain new Companion gear to match the power of the rewards from Episode 1. We also reward the players willing to take on greater risk, by giving out greater rewards to those completing the harder challenges. As an additional gameplay activity for players, Heroic Encounters offer a continued repeatable challenge for players looking to obtain additional rewards during their adventures. Furthermore, the encounters add to the excitement of traversing this harsh landscape by giving players more variety as they progress through the Sharandar Campaign. We’re excited about these new encounters and fun gameplay. We can’t wait for everyone to experience the new Heroic Encounters, including Waking Nightmares, in Episode 2!

MMORPG: Awesome! Are there any elements related to this Heroic Encounter that are unique to this fight?

MMORPG: What’s your thought process when developing a new Heroic Encounter for players to tackle? Do you try to find a way to make existing elements from other encounters thematically fit, or do you prefer to come up with new ways to test the bounds of what players can handle without changing the core mechanics?

Noah: I’m a huge fan of fun gameplay first, compelling story second. When thinking about what is fun from other Heroic Encounters we’ve done before, we try and find ways to include those elements while also adding in something new. I like to think of what I find fun in MMORPGs and then start from there. We do a lot of internal playtesting and then iterate on our designs as we go, since fun can be subjective.Players will often have to do these Heroic Encounters a few times to get the rewards they are chasing, so we want them to be fun with interesting repeatable elements. We also like to add in surprises from time-to-time, similar to what we’ve done with the Ensnared Heroic Encounters in Avernus. For those that remember, Bazazath the Holy is a bonus NPC that appears in Ensnared, and grants participants an additional reward for completing the bonus phase.

MMORPG: Surprises are always fun! How will players access this new episode including the Heroic Encounter?

Noah: You will need to have completed the Episode 1 campaign first to access the Mended Grove. Once there, you can head right to the Heroic Encounter if you so desire!

MMORPG: What can we expect to see as far as loot from this event? There’s people wearing super snazzy purple armor in the trailer. Is this gear from this expansion or does it just happen to fit the look of the area with all of the colorful glowy mushrooms and deep colors in the forest?

Noah: Yes, the Seals of the Wild that drop in the Heroic Encounters can be used to buy the Crone's gear, which is the purple gear players have seen in recent images and videos; they are already available! The Crone's gear costumes are some older costumes that our players may have not seen in a while, including some of the old Sharandar gear.

MMORPG: Are there any pieces of gear that players will be immediately able to identify as being from this particular encounter?

Noah: So for the rewards that will be available in Episode 2, players can expect to find new companion gear, all with item levels to match the new gear they got in Episode 1!  We will also be releasing rings that are the best in slot, not just in item level, but with new powers that will complement our new combat ratings system, as well as our new foes in Sharandar.

MMORPG: When we spoke about the Sharandar trailer, I was curious if we got to fight that super creepy looking figure in the trailer. Randy informed me that she’s actually an archfey, so tell me: Do we finally get to fight this person in The Soul Keeper?

Noah: I think you are referring to Granny Necksnapper (the Annis Hag) from Episode 1, as she makes an appearance in the trailer. There is a new threat for Episode 2 that’s not quite featured in the trailer, though. Players will have to play through the story and campaign to reveal who or what it is! I will give you a special hint though: The Keeper of Nightmares is a lieutenant of the Episode 2 antagonist!

MMORPG: Lastly, while not directly related to Sharandar’s The Soul Keeper, do you guys have any idea what happened to delay the console release of Sharandar for another month?

Noah: We want to give players the best experience possible, so often it makes sense to delay a product release to ensure it will meet their expectations.

MMORPG: Understandable. Thanks again for your time, Noah!